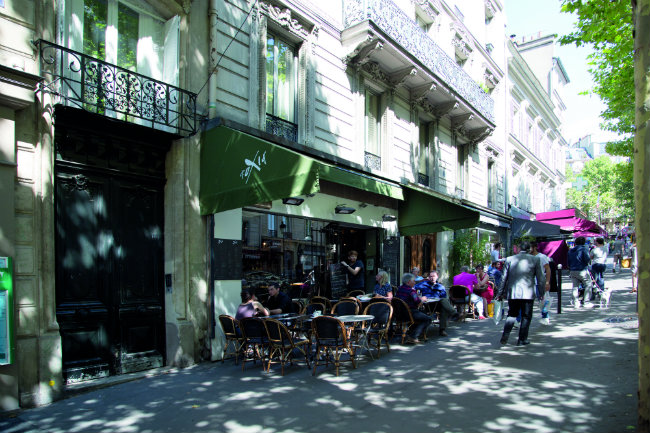 What’s the story behind this street, the path taken by a beheaded saint?

Running from Pigalle’s Église Notre-Dame-de-Lorette up to the Sacré-Coeur in Montmartre, the rue des Martyrs is rumoured to have taken its name from the martyrdom of Saint-Denis, the first bishop of Paris, who (and this is all according to legend) was beheaded by the Romans.

As the legend goes, Denis picked up his severed head and walked the length of this street with it under his arm – and indeed further, all the way up to where the basilica in his name was later founded, which is quite a few kilometres…

These days the street, still one of the busiest in Paris for shopping and café life, is a magnet for food lovers, drawn up here to the old-fashioned charm and human scale of the mom-and-pop vendors and authentic food outlets.

The street has somehow always managed to maintain the mussed-up colour of its bars and cabarets. “I can never be sad on the rue des Martyrs,” says Elaine Sciolino, as she celebrates the neighbourhood’s rich history and vibrant lives in her book The Only Street in Paris, which is entirely dedicated to the rue and its 200 or so small businesses.

Sciolino explains that while many cities suffer from the ‘sameness’ effect of globalisation, the rue des Martyrs maintains its distinct allure.

Previous Article Naughty and Nice: 10 Picks for Christmas Shopping in Paris
Next Article Places to Stay and Eat in Midi-Pyrénées