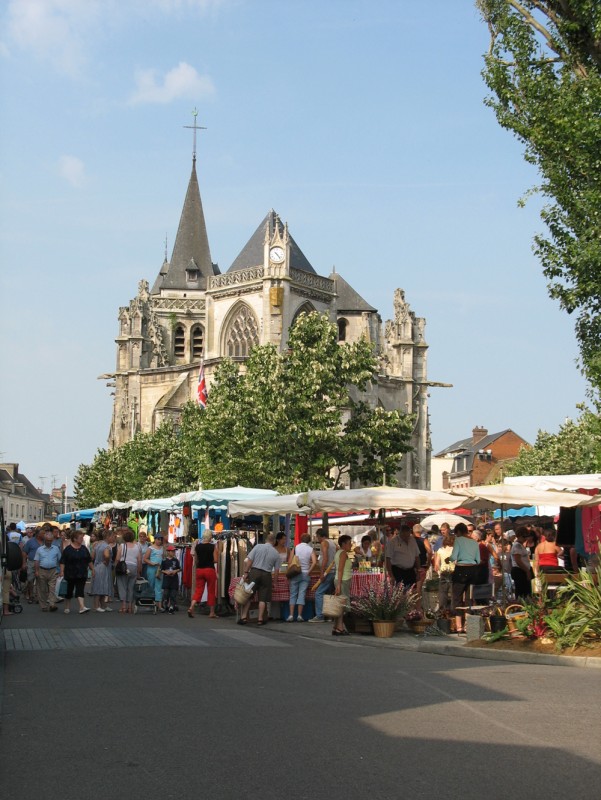 I had to laugh tonight as I watched my ten-year-old daughter Fiona look the tentacled head of a squid in the eye, almost literally, as she tried to figure out just how to eat it. After careful thought and study, she delicately bit off each tentacle, then proffered the remaining bundle to me. “Want it, Mom?” she said.

Intrepid in nearly everything she does, Fiona’s adventure with the squid began the day before, at the farmers’ market in Le Neubourg, not far from our town in Normandy. Though we have a marvelous market in our own town on Saturday mornings, Fiona and I both love the Wednesday market in Le Neubourg, even though it entails a 20-minute ride in the car. Different things draw each of us.

Fiona is partial to the fluffing, fluttering, peeping poussins—the baby chicks, ducks and geese that are on offer nearly every week of the year. Little cream to pale yellow balls of softness, these birds are destined for the basse cour, or barnyard, and farmers come to buy them by the boxful. There are older birds for sale too, and nothing is more amusing than watching a florid, close-to-the-earth Norman farmer walk down the street towards his car or truck, arms wrapped around a box that is trying as hard as it can to leap from his arms.

I love the market for its soul. In Le Neubourg one approaches it from a slight rise, so you can look down on the gaily colored awnings clustered around the 13th/15th-century church of Saint Paul, still very much the way markets were in medieval times. Then, market stands were literally built into the sides of the church and vendors not only sold from but also lived in them. In the Neubourg church you can still see the holes where the old beams went. Looking down at the market, if you mentally eliminate the cars and electric lighting, and listen to the hawking and the hum of conversation, you can easily imagine yourself beamed back to another era, when livestock and grain were sold along with farmers’ fruits and vegetables.

Le Neubourg is intact in another way as well. During the second World War it housed the bakers of the German army, making it something of a safe haven from attack. A few bullet holes in some of the buildings just outside the main square are the only obvious clues to wartime activity.

I also love the market for its produce, and the generosity with which it is dispensed. Fiona chimes in with her delight at the many flavors and textures she gets to sample—this week they ranged from savory accras de morue, spicy little balls of deep-fried salt cod, to bugnes, donut-like morsels dusted with sugar that, quite literally, are mouth-melting. At the cheese truck, we nibbled thick slices of Comté from the Jura, aged for 30 months until it is so buttery and golden you want to swim in its flavor forever. At the olive stand, the fat green ones stuffed with almonds and bathed in a vinaigrette go down oh so easily, along with sun-dried tomatoes slathered with feta cheese and a sweet piece of jellied loukoum (Turkish delight).

I think it is the fish stall that fascinates most, however. A few weeks ago we arrived and a huge shark was bent into an O, its tail stuck into its tooth-rich mouth. This week, coquilles Saint Jacques, or sea scallops, were the star. Sold in their delicately beautiful shells, case after case was stacked in front, behind, and to the side of the regular display, and one employee was dedicated solely to opening each shell and scraping the succulent muscle inside free. We bought some—in the shell because they are gorgeous and when cleaned make wonderful boats, soap dishes and garden decorations—then moved along to see what else was in season. A brilliantly shiny mound of purple-hued squid, each the size of a large slipper, caught Fiona’s eye. (The squid here are of the same family as the calamari—an inky name that comes from the medieval Latin for pen case—that are familiar elsewhere in Europe and in the US; they are also related to the tiny supions of southern France and other cuttlefish found in international waters.)

The fishmonger picked one up and waved the curly tentacles at her, then pulled them back to reveal a perfectly formed miniature beak, shaped like one owned by a parrot. “That’s what they grind up shells with,” he said. Her response? “Maman, can we eat one for dinner?” I bought one, and we moved on, my basket heavy with the scallops, the squid, a handful of shrimp, and a tiny bucketful of cockles.

After our marine foray, we headed to the stands behind the church, for that is the best part of the market, where all the maraîchers or market gardeners sell their produce. When I take a group of students or friends, I never hesitate to point out the tall, perennially tanned apple farmer, whom I secretly refer to as Adonis. His real name is Rick, and he stands out among all the other sturdy farmers, for Normandy is a land of the strong, solid, small. Rick’s smile is bright white, his hair a work of coiffeurial art thanks to the ministrations of his wife. When he isn’t harvesting or selling apples and strawberries he is out on his motorcycle, or visiting his brother in Brooklyn, or simply enjoying life. As he puts it “I’ve got a pretty wife, a great motorcycle, nice kids and a good job—who could want more?”

Rick’s is one of many simple truths at the market. Two brothers near him have separate stands, and they apparently don’t speak to one another. Whenever I’ve been there each has been very busy selling his separate harvest. One claims his produce is organic (I believe him, though it’s a leap of faith), the other makes no claims, but I swear by his eggs, his bunches of tiny turnips and his heavy squash. Market loyalties can be awkward, but not with these two. Since they never look at each other, it is easy to shop from both.

I chose a Savoy cabbage from the organic brother, its deep green wrinkled leaves so beautiful it would be hard to tear them from the tender heart. We moved on to the dairy stand where a young, ruddy faced and energetic woman sells the most gorgeous milk—it’s half cream—along with fresh churned butter and cheese so young it wobbles. Then we moved to her neighbor, the rabbit man. Rabbit is an important ingredient in rural France, usually braised in liquid, lots of herbs, maybe dried fruit, and finished off with cream. This man, however, has done quite a bit more—he offers rabbit sausage, rabbit rillettes (a sort of spreadable pâté) and rabbit livers. Along with all of this are the pots of teurgoule on his stand, the very local version of rice pudding seasoned with cinnamon. Cooked in a low oven until it is absolutely black on top, it offers solid, creamy substance beneath. Finally, our shopping nearly done, we visit a last vegetable stand for the inevitable bouquet of carrots.

I say inevitable because, as gorgeous as everything is at the market, here we are at the end of March, just the tiniest bit weary of winter fare. I’m sorry to admit it, but I’ve had my fill of celery root, and even leek and potato soup has lost some—not all—of its heady luster. As slightly calmer temperatures arrive, and there’s a haze of soft green shoots on every aboveground plant, and the sturdy leaves of daffodils, tulips and hyacinths break ground, my taste buds shout, “Something different!”

I suspect most cooks feel the way I do. Happy as we are to have honored the abundance of winter, oh! how good it would feel to bite into a fresh crisp radish, eat a green pea, nibble on a tender new onion, exult over the first new potatoes.

All of this spring sprouting will happen soon enough, though, and the anticipation is almost as good as the reality. Meanwhile, I’ve come up with a few tricks to help our palates dance their way on through this fin de saison.

Kohlrabi is the first of my secret weapons. Though technically winter fare, this flying-saucer-ish vegetable is gorgeous right now—firm, green, crisp. My favorite way to eat it is raw, sliced quite thin, drizzled with lemon juice and sprinkled with fleur de sel seasoned with piment d’Espelette. Its sweet crunchiness delights everyone who tries it.

Button mushrooms are another. They’re always around, which for me means they tend to fade into the background. Now is the time to bring them out and sauté them with garlic, slice and serve them dressed in a gutsy vinaigrette seasoned with rosemary from the garden; or combine them with cream, pasta, prosciutto and squid for a succulent repast.

That is exactly what I did when we arrived home from our market sojourn. The mantle of the squid turned into rings that, once exposed to heat, extra virgin olive oil and a shower of garlic turned white. The head with its curly tentacles remained whole. It all blended with the other ingredients to make a perfect meal.

If you cannot find squid, or feel a bit squeamish about preparing it, simply omit it from this end-of-winter dish. It will still be amply, wonderfully delicious!

2.  Bring a large pot of salted water to a boil over high heat.

3. Meanwhile melt butter and oil in a heavy-bottomed saucepan over medium-high heat. Add garlic and cook until translucent, about 3 min. Add mushrooms and cook, stirring and shaking pan, until they have softened and given up most of their liquid, about 8 min.

4. Cook pasta in boiling water until al dente, tender but firm, about 7 min.

5. While pasta cooks, finish the sauce. Drain any liquid from the squid. Increase heat under mushrooms to medium high, add squid (if using), and cook for about 30 seconds (if using small squid) to 1 minute (if using large squid). Stir in crème fraîche and cook until squid is white through, an additional 5 min. Finely mince rosemary and add it to the sauce. Fold in prosciutto. Correct seasoning.

6.  Drain pasta, return it to cooking pot and add sauce. Toss until all pasta is coated, and transfer mixture to warmed plates. Garnish with parsley and serve immediately.