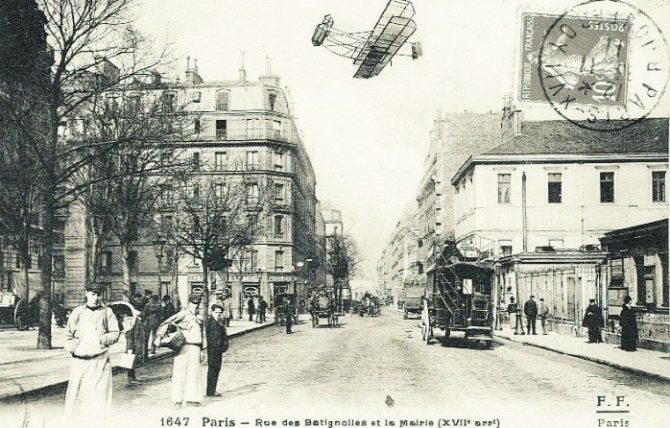 Wedged behind the seedy Place de Clichy, Batignolles is one of those forgotten Parisian neighbourhoods which has succeeded in retaining its village atmosphere, despite a large housing development unravelling on its outskirts.

It was in this neighbourhood, during the late 1800s, that the ‘groupe des Batignolles’ started the Impressionist movement, and it’s where their leader, Édouard Manet, lived and worked. During the same period, the Statue of Liberty was assembled just a few streets away. Although few artists still live in the area, it brims with artisans and excellent independent places  to wine, dine and shop. Batignolles is very laid-back and off the beaten track – Julien Sançon, owner of design boutique Blou (75 & 77 rue Legendre), says it’s “a neighbourhood where its residents have perfected the art of living the good life.”

With the Place de Clichy a 10-minute walk away, and only double that from Montmartre, the residents of this quartier in the 17th arrondissement are mainly young ‘bobo’ (bohemian bourgeois) families. These like to be able to leave their children to run riot in the idyllic, mid-19th century park, the Square des Batignolles, which has a small Art Nouveau glasshouse and a lake dotted with white swans. Place du Docteur Félix-Lobligeois, with the Sainte Marie Church at its centre, is the beating heart of the neighbourhood. In the summer, this leafy square is thronged by people eating and drinking at the surrounding restaurant and cafe terrasses, such as at Le Tout Petit (No. 73).

Batignolles has mainly managed to hold on to its quaint village charm because it wasn’t actually part of Paris until 1860, when it was incorporated by Napoleon III.

Despite losing its village status, Batignolles continued to attract artists like Édouard Manet, who lived at 34  boulevard des Batignolles. Manet’s ‘groupe des Batignolles’ included the likes of Mallarmé, Monet and Renoir and they’d meet in the area, mostly at Café Guerbois (11 avenue de Clichy), which is sadly no longer there, and their get-togethers spawned the Impressionist movement.

In addition to artists, Batignolles attracted such writers as Emile Zola, also a close friend of Manet, who would retreat there to work. Zola even gave his main character, Nana, in the novel of the same title, a Batignolles address. The poet Paul Verlaine and chansonnier Jacques Brel also lived in Batignolles.

“Batignolles is a neighbourhood with lots of great beautiful addresses that is in constant evolution,” says Julien Sançon. “But Batignolles isn’t the Marais – the locals might have good sharp taste in food and design but they’re not hipsters.”

The neighbourhood is packed with unique, independent places to eat, drink and shop – in fact, it’s possible to spend weeks exploring the area without ever leaving. On the whole, the streets to delve into include everything within the area marked off by Rue Cardinet, Avenue de Clichy, Rue des Dames and Rue de Lévis.

Aside from Blou, the other recommended Batignolles spots for design fiends include IrèneIrène (88 rue des Moines), while on Rue Legendre there are Aleth Vignon Atelier (No. 98) and Mobil Home (No. 106), plus the jewellery créateur boutique Bloomy Star (No. 77) next to the tiny beauty salon Les Petits Soins (No. 73). Staying on the beauty theme, there’s also Les Copains d’Abord (95 rue Nollet), a barber whose original retro décor is well worth stopping by for.

As well as design boutiques, dozens of artisan workshops nestle around Rue Lemercier. For a glimpse of a real artisan at work, pop in to the beautiful Atelier Marie La Varande (6 rue Bridaine), where she hosts wonderfully skilled students who are in the art of sculpture.

Other big attractions include the Marché des Batignolles (96 bis rue Lemercier). Built in 1846, this covered market has all sorts, from regional produce to green grocers, butchers and the vegan eatery, My Kitch’n (24 rue Brochant) which serves salads and fruit smoothies. For organic produce, the Marché Biologique (42 boulevard des Batignolles) takes place every Saturday from 9am-3pm.

Bordered by the railway along its western axis, this relaxed, chic pocket of Paris emanates the quintessential French lifestyle, which is underpinned by an evident pleasure principle. However, this idyllic little village may be in for a radical change in the year to come, due to a large-scale project to bridge Batignolles and Clichy. By the end of 2015, there should be an extra 3,400 apartments and office buildings with facilities like nursery schools and shops on the Cardinet side of the neighbourhood. Furthermore, the Ministry of Justice’s court and the police headquarters – both currently on Quai des Orfèvres – are also due to be relocated to the area within the next two years.

Pont-Cardinet station, on the overground line linking St Lazare to Versailles, will play a pivotal role in Batignolles’ evolution. As part of the ‘Grand Paris’ project, which aims to extend the city beyond the périphérique ring road border, metro line 14 will be extended and pass through the neighbourhood at Pont-Cardinet station, right behind the Square des Batignolles. As part of the project, Pont-Cardinet’s entrance will be completely redesigned by German artist Tobian  Rehberger. His design is set to be a colourful, contemporary geometric interpretation of the iconic Art Nouveau metro entrances by Hector Guimard. The station entrance will be integrated into a futuristic building just next door, designed by the Beijing-based MAD Architects.

However, this isn’t the first time that Batignolles’ unique atmosphere has seemed under threat. In 1844, when the Batignolles station on Paris’s old Petite Ceinture railway was built, it look set to destroy the area’s ‘village feel’ forever, yet the neighbourhood remained relatively unscathed. Over a century later, Batignolles was again confronted by huge urban development plans, as part of Paris’s bid to host the 2012 Olympics. The Olympic park was set to be right at the doors of the neighbourhood. Today, in its place, sits the 50-hectare Parc Clichy-Batignolles: Martin Luther King which, with its skate park, has become a well-loved meeting spot.

Despite the looming regeneration projects, Batignolles has resisted change before and its residents are confident that it will again. It seems that nothing can perturb the unique charm of this neighbourhood, one largely forgotten by the rest of Paris, where locals will go on living the good life for centuries to come.

Laure Dugas and Maxime Berthou (and their little dog, Irma) opened this ‘cave’ in 2001. They stock 500 labels and spirits, of which 200 are served by the glass – including St Réol, Laure’s family Champagne. Cold plats can be ordered and the duo have just opened a seafood restaurant, L’Ecailler de L’Ebéniste, at No. 76.

Four years ago, Julien Sançon created the Blou home ware store at No. 77 and, just five months ago, he opened a furniture boutique at No. 75. Julien’s always on the hunt for beautiful but functional design and his mix of slick, Scandinavian-style pieces and items sourced from around the world is a definite hit.

An institution in the quartier, especially for its idyllic back garden, this bistro was opened in 1999 by the Chardin family, who also own the adjoining Hotel Eldorado. Sidonie and Jocelyn serve homemade brasserie fare, sometimes with an Asian twist, and the focus is on fun décor and the quality of the ingredients.

Marie and her two cats settled into her atmospheric workshop, where she teaches professionals and beginners the art of sculpture, a decade ago. The sculptress, who once worked on restoring Marie-Antoinette’s bathroom at Versailles, still has a thriving passion for all materials – from wood to clay.

This boutique was opened in 2013 by two exceptionally talented designers, Cécile Simon and Aurélie Joliff. The duo can sometimes be seen making their completely handmade creations, pieces of jewellery, headpieces and handbags, featuring semi-precious stones and gold-plated brass, behind the counter.