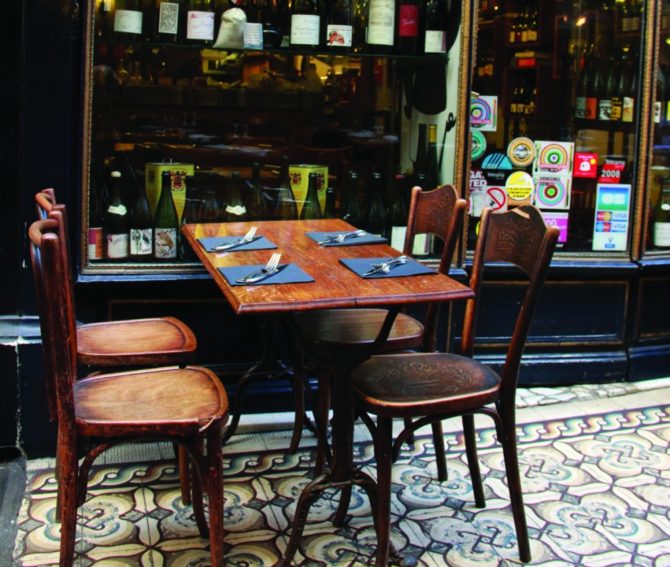 Chef Pierre JanCou certainly was not a restaurant néophyte when, in 2007, he decided to buy a former print shop dating to 1860 in the Passage des Panoramas, then a sleepy, slightly crumbling, covered shopping arcade situated off the Grands Boulevards in Paris’s 2nd arrondissement.

Jancou had owned his first establishment at the age of 21 – the very hip Italian trattoria La Bocca, situated in a transformed, circa-1900 Rue Montmartre bakery. His second, the wine bar La Cremerie – located in a magnificently-preserved 1880 dairy shop featuring a ceiling fresco of painted silk – was later placed on the French register of historic monuments. Yet when Jancou’s entourage learned of his new plans, the reaction was hardly enthusiastic: “All my friends were telling me I’d gone completely nuts, but I loved this passage so much, and I believed in it. Still, I couldn’t have imagined what it was going to become.”

At that time, Panoramas was in a slump, having struggled to rebound from the closure of the nearby stock exchange, which drained thousands of jobs from the neighbourhood in the 1990s. Few boutique owners, besides the established philatélistes (postage stamp dealers), were managing to draw a satisfactory clientèle.

According to Laurent Messmer – an artisan jeweller and the president of Panoramas’ business owners association – the opening of Jancou’s restaurant, Racines, was not just a critical success, it also launched a movement: “A passage that used to be mainly philatélique is now becoming gastronomique. It’s amazing, there are 21 restaurants in the passage now, offering everything from a nine-euro hamburger to a two- Michelin-star dinner… This evolution has given it a new identity.”

“That’s really [Jancou’s] talent,” says Guillaume Guedj, owner of the restaurant Passage 53. “He has this ability to go to unlikely places, open up a restaurant, and create a whole new dynamic around it.” Indeed, there’s a renewed sense of pride in Passage des Panoramas today, and it is palpable in businesses old and new.

Welcome mats are being dusted off as curious patrons pour into the passageway in numbers not seen for years. And so they should, for
it is not only the oldest covered passageway in Paris, boasting many forgotten architectural jewels, but also one of the last places in the capital where the atmosphere remains so authentically, unapologetically and deliciously Parisien.

Inaugurated in 1799 on the site of a former hôtel particulier, for decades Le Passage des Panoramas counted among the most avant-garde places
in Paris. In a city which was still without sidewalks, ladies could step from their carriages and perambulate though this 133-metre bazaar – the precursor to the modern shopping mall – composed of 60 three-level houses with individual store fronts, which was free of rain and mud yet flooded with light thanks to its glass roof. In 1817, Philippe Lebon installed Paris’s first public gas lighting at Parnoramas and the last remaining example can be viewed in No 11, Garcia Philatélie. Panoramas’ name comes from an attraction which stood above its entry between 1823 and 1831, composed of two rotundas which contained 360° panoramique paintings of Paris.

This singular space’s most riotous years are linked to the Théâtre des Variétés – a 900-seat, Italian-style masterpiece which opened at 7 Boulevard Montmartre in 1807 – which has its artists’ entrance in the passage. The operettas performed there, such as Jacques Offenbach’s La Belle Hélène of 1865, were wildly popular. During these Belle Époque years, Panoramas was the place to be, frequented by artists, writers and the upper classes.

In Nana, Emile Zola’s scandalous novel of 1879, Panoramas is almost a character unto itself, portrayed as a den of temptations where counts come to frolic with actresses and courtesans.

“She adored the Passage des Panoramas,” Zola wrote. “When she passed the shop windows she could not tear herself away from them… [she] fell into reveries in front of the chocolate maker’s sweet-stuff shows or stood listening to a musical box in a neighbouring shop or fell into supreme ecstasies over cheap, vulgarly designed knick-knacks.”

Perhaps Pierre Jancou, a lover of 19th century Paris, was also drawn by what Zola termed “the perfume of vanilla emanating from a chocolate dealer’s basement”. In 2007, he opened Racines just across from No 57 Passage des Panoramas, where the famed chocolatier Marquis opened in 1818. Today, No 57 is a charming tea room, l’Arbe à Canelle, which still boasts the lovely original décor of ornately-carved columns and painted wood panels.

Benefiting from the passage’s period caché and a savvy menu composed of impeccable meats and produce, all matched with organic, sulfite-free wines, Racines was named best Cave à Manger by France’s Le Fooding guide in 2008, and continues to draw throngs of foodies and beau monde.

Racine’s accolades had begun to raise Panoramas’ profile, and the trend accelerated with the opening of Passage 53 in 2009 by Guillaume Guedj and chef Shimichi Sato (Jancou, a friend of Guedj, had tipped them off about the passage’s vacancy). Sato had worked some of France’s finest kitchens (Pierre Gagnaire, Hélène Darroze) but few predicted what he would achieve at Passage 53.

Thanks to such spectacular dishes as veal and oyster tartare, or his assiette blanche of squid with cauliflower, in just three years Passage 53 has earned two Michelin stars and an invitation to Relais & Châteaux, a fellowship of the most luxurious hotels and restaurants on earth – an astounding feat for a tiny, 20-seat ‘hole in the wall’. Their secret? “We have the Passage des Panoramas,” says Guedj. “It’s perhaps less prestigious… but it’s such an authentic piece of Paris.”

Authenticity is what attracted Guillaume Dupré and Olivier Roche, who opened Coinstot Vino at No 26 (acquired also thanks to a tip from Jancou) in 2010 as a laid-back alternative to Racines, with comforting, tasty cuisine, pizza and plates of positively extraordinary fromages, charcuterie and oysters, accompanied by natural wines. Coinstot is old Parisian argot for the kind of notorious back alley hangout which Boris Vian wrote of fondly in his poem Je voudrais pas crever. Like Passage des Panoramas, Coinstot Vino is a bit rough around the gills but it oozes bonhomie and bon appétit.

The number of establishments in Panoramas continues to grow, as does the variety of cuisines on offer. In February 2012, Passage 53’s Guedj and Sato created the Gyoza Bar, serving authentic fried Japanese raviolis filled with Dordogne pork and served with soy-lemon-grapefruit sauce. The same year also saw the opening of NoGlu, Paris’s first restaurant and épicerie offering totally gluten-free cuisine, bread and pasteries.

Meanwhile, at No 12, the historic Bar des Variétés revamped its menu, to specialise in gourmet hamburgers of Salers beef with homemade brioche buns and such toppings as Camembert or foie gras. Finally, this Summer, José-Luis Bilbao opened Les Grands d’Espagne at No 44-47. “Spain has fabulous products, but what you see exported doesn’t at all reflect the image I hold of my country,” says Bilbao, who is changing that by vending the finest melt-in-your-mouth Iberico ham and other delicacies.

One might well imagine that this gastronomic revolution must be ruffling the feathers of Panoramas’ more established businesses, but apparently not. “The passage was a much sadder place 30 years ago,” says Jean-Guillaume Garcia of Maison Garcia, Panoramas’ oldest philatélistes, dating to 1898. “People are even living above their boutiques again. We’re returning to an ambiance much like it was in the 19th century.”

“The passage is like a village hidden in the middle of Paris,” says Samuel Gautré of La Postale. “There has always been incredible variety, restaurants, bars, merchants selling pipes, tobacco, hats, and it constantly evolves – a restaurant closes and a gallery opens.” Visiting Gautré’s elegant boutique, it is clear that the philatélistes’ future in Panoramas is sound.

Looking ahead, a greatly anticipated re-opening is slated for 2014. No 47 is the former boutique of Stern, France’s most famous engraver, and
its Cordovan leather walls and carved wood interior have remained untouched since 1834. According to Jancou, who is always in the know, a handful of prestigious Italian partners are to open a Venetian-style café in the historic space. “They want to bring the dignity of coffee to Paris,” he confides, “served in one of the most beautiful places in the city. When they open, it will be huge – Panoramas will truly be le passage du goût.” The passage of taste – a deserved name, indeed.

In 2010, Pierre Jancou handed Racines off to David Lanher, who is today backed by former Senderens sous-chef Renaud Marcille, and it remains a cult address. Expect classy, bistro fare made from impeccably sourced produce and surprising, very natural wines.

Tourists from the Musée Grévin waxwork museum across the street can now have a truly intimate brush with fame. From Marilyn Monroe to Victor Hugo and Renoir, Arnaud Magistry’s framed autographs, letters and portraits are “pieces of history” that you can actually take home.

This 20-seat restaurant is tiny, entirely white and totally Zen. Mixing a Japanese sensibility with French ingredients from celebrity producers (Bordier butter, Desnoyer meats, Joel Thiébault’s vegetables), it offers what many consider to be some of the most innovative cuisine in Paris.

There are philatélistes, and then there is Samuel Gautré’s boutique, perhaps the most beautiful philatelic temple in France, which vends only the world’s rarest, most valuable stamps. Its majestic 19th-century double staircase has been trodden by the likes of Zola and Balzac.

A consummate craftsman, Laurent Messmer creates and repairs jewellery in a boutique which still boasts its original colourful tile floors, including a vast Art Deco mosaic in front of the shop that spells out ‘WATERMAN JIF’, the name of the gold-tipped fountain pens once sold here.

Gluten-intolerant Frédérique Jules (the partner of Racines’ David Lanher), together with an American pastry chef and a Japanese lover
of bistronomie with three-star restaurant experience, is proving that gluten-free can still be decadent and delicious.

Guided Tours: In addition to the droves of foodies attracted by Racines et al, new guided tours are bringing culture- lovers through the Passage and range from the literary (www.surlepavelaplume.com) to the theatrical (www.visites-spectacles.com).