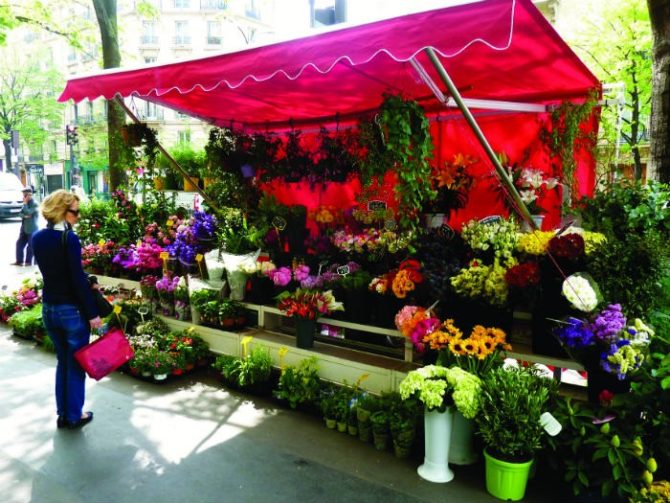 This ancient Parisian faubourg was at the heart of the City of Light’s metalworking industry during the early to mid 19th century, but today there’s barely a hint of the neighbourhood’s industrial past. Nestled in the heart of the Oberkampf district in the 11th arrondissement, the Rue de la Folie Méricourt remains relatively little-known, despite its location, just steps from the bustling Rue Oberkampf and the revamped Place de la République.

This colourful quartier, although quite central, retains a low-key village atmosphere and it’s where local foodies, revellers and bargain-hunters rub shoulders with in-the-know out-of-towners. That said, the last five years or so have seen major changes, with the neighbourhood undergoing a certain amount of ‘boboisation’ (gentrification), like many other areas of Paris.

La Folie Méricourt and its surrounding streets are now awash with trendy bars, cafes and restaurants – plus a host of old favourites – all of which have helped to put the neighbourhood on the map.

The southern end is flanked by the imposing Église Saint-Ambroise de Paris (71 boulevard Voltaire), which was built by architect Théodore Ballu over the course of five years, between 1863 and 1868. This listed monument, which featuring slender spires not unlike those seen on some of the grandest cathedrals, fuses together several styles – Neogothic, Neo-Romanesque and Neo-Byzantine – an architectural approach that was very popular at the time.

Housed in a former printing works that’s tucked away in a blink-and-you’ll-miss-it courtyard, the À la Folie Théâtre (6 rue de la Folie Méricourt) is a small but friendly neighbourhood venue. The concert hall offers a varied programme, which runs the gamut from comedy and classical theatre to “atypical” and kid-friendly shows, plus a range of theatre classes and workshops for both adults and children.

The first of a handful of galleries in the area is La Folie Bleue (38 rue de la Folie Méricourt), a veritable treasure trove of exquisite Asian objets d’arts. Inside you’ll find a huge selection of antiques, textiles, jewellery, sculptures and statuettes. Each exotic piece collected during the curators’ regular trips to the Far East, and in most cases purchased directly from the artisans themselves.

Owners Yves Maréchal and Dominique Briand aim to share their passion for Asian art and the reasonable prices ensure that the gallery is accessible to all art-lovers, no matter their budget. What’s more, part of the proceeds go to an association they created which pays tuition fees for disadvantaged children in Southeast Asia.

If your tastes lean towards more contemporary art, then La Ferronnerie (No 40) is a hotbed of work by rising artists. Gallery Director Brigitte Négrier focuses on European and South American talent whose oeuvres span paintings, drawings, photography and creative installations. Meanwhile, music fans – especially vinyl lovers – should drop by Fargo (No 42), which is easily spotted thanks to its wooden façade and neon lights. This store and record label specialises in rock, although it also carries many a soul and jazz title. Regular free artist showcases always draw a crowd.

Just around the corner, if you wander eastwards on the Rue Ternaux, the charming square in the Village Popincourt enclave is largely sheltered from the din of the Rue Oberkampf. It’s home to a host of casual lunch spots and quirky bric-a-brac boutiques.

Almost next door is the Düo Galerie (24 rue du Marché Popincourt), a combined café, bookshop and contemporary art gallery dedicated to photography. Its exhibitions feature works by emerging and established photographers, and change every month or so.

Boasting a prime spot on the corner of the Rue Ternaux and the Rue du Marché Popincourt is Alasinglinglin (1 rue du Marché Popincourt), a vintage furniture shop that’s packed to the rafters with retro decor delights, including lamps, dining sets and sofas. The stock dates from the 1920s onwards, though even a quick glance inside reveals that the owners – Philippe, Bruno and Nathalie – have a soft spot for pieces from the 1960s and 1970s.

More brocantes can be found a little further along the street, where  Trolls et Puces and Belle Lurette (1-5 rue du Marché Popincourt) sit, side-by-side, in a shared, sprawling converted 250sqm workshop. Their stock represents different eras and styles, with shoppers appreciating the eclectic mix of genres gathered all under the one roof. You could stumble upon a rare find, whether a gilt Venetian mirror, a 19th century armoire, 1950s leather armchairs, ancient trinkets or restored paintings.

Refuel at local favourite Paris-Féni (15 rue Terneaux), which is named after a district in Bangladesh and serves up a wide array of delicious, freshly squeezed juices – such as cucumber, orange and mint, and mango and basil – and a traditional yoghurt-based drink known as lassi.

You can also grab a bite to eat – the biryani and chapati dishes are always served generously – but if you’re after a table on the terrace, you may have to fight for it.

If a quick snack is all you’re after, don’t miss Al Taglio (2 bis rue Neuve Popincourt), the original in a small chain of ‘pizza-by-weight’ canteens. Among the mouthwatering toppings on offer are spicy salami and artichoke, marinated prawns, ricotta and cherry tomatoes, and salmon and walnut pesto. However, the house specialty, truffle cream and potato, is the winner.

Back on the Rue de la Folie Méricourt, Le Verre Volé (No 54) is one of many chic épiceries to spring up across the area in recent years. Well-versed Paris gourmets will be familiar with its wine cellar around the corner (38 rue Oberkampf), and the reputed gourmet bistro (67 rue de Lancry), which is just a hop, skip and a jump from the Canal Saint-Martin.

The small Le Verre Volé deli and sandwich bar uses nothing but the finest products; meat from acclaimed Parisian butcher Hugo Desnoyer and bread from Thierry Breton plus specialities imported from Italy. The trusty classiques are scrawled on the chalkboard outside, along with a special sandwich selection which changes daily and includes the likes of smoked herring with radish cream, sweet onions, lemon confit and pickles; turkey pastrami, garlic salad and aubergine ricotta, or even horse tartare, Thai spices and herb mayo…

Past Rue de la Folie Méricourt’s junction with the Rue Oberkampf, it’s largely residential, but there are still several addresses worth a visit. La Brulerie (No 58) is a small, old school ‘coffee factory’ which would be very discreet if it weren’t for the intoxicating aromas wafting into the street, due to the fact that the maison still roasts and grinds top quality beans in-house, including Colombian Arabica and Ethiopian Robusta.

A few doors down you’ll find l’Échapée (No 64), an ‘urban spa’ and restaurant that’s dedicated to pampering and indulgence. At 800sqm it’s one of the biggest spas in Paris yet the atmosphere is cosy and intimate. There’s a long list of massages, body scrubs and beauty treatments on offer, plus yoga and pilates classes.

On the way towards the Rue du Faubourg du Temple is the tiny Place de la Fontaine-Timbaud, which has been home to the popular restaurant Astier (44 rue Jean-Pierre Timbaud), since 1956. This bistro’s hearty home cooking, or cuisine du terroir, attracts tourists and locals alike, many of whom opt for the great value prix-fixe menu, which includes an all-you-can-eat cheese course.

Astier’s look, with its rustic wooden panelling, vintage photos and Art Deco ceiling lights, is traditionally French, right down to the red and white checked tablecloths.

Venture a little further and at the far end of the street, on the border with the 10th arrondissement, the Canal Saint-Martin emerges and meanders north. This quartier is the epitome of north-eastern Parisian bohemian charm, and it’s a prime spot to claim a perch on one of the iron footbridges and watch the boats potter by, navigating the canal’s system of locks and road bridges.

This Napoleonic waterway draws crowds with its tree-shaded quays, which are lined with lively bars, casual restaurants and chic boutiques. During balmy days, and nights, the area fills with guitar-toting and picnicking hordes but most of the time it’s a tranquil spot, and on crowd-free days the canal is one of Paris’s most picturesque corners. Indeed, there’s no better place to rest your weary feet after a day spent exploring.

You could very well miss this self-proclaimed “coffee factory,” if it weren’t for the powerful aroma of its coffee beans which are roasted and ground sur place. The store also carries a large selection of teas, chocolate and coffee percolators. Drop by for the perfect brew.

This gallery-boutique is dedicated to Asian art and stocks a massive selection of exotic objets sourced directly from the artisans. The prices start at just €1 and part of the proceeds of each sale going to an association which funds schooling for disadvantaged Asian children.

If you’re looking for a classic, unreconstructed and non-gentrified Parisian bistro, then head to Astier. This local institution is beloved for its delicious range of cuisine du terroir, and famous for its legendary ‘all-you-can-eat’ cheese tray. Reserve a table and forget the diet!

Scrumptious sandwiches with original fillings made using top-notch produce from some of the city’s most sought-after butchers, bakers and fromagers. They also own the wine cellar around the corner and the long-established bistro on the nearby Canal Saint-Martin.

Offering fresh juices featuring exotic ingredients and reasonably-priced Indian-influenced dishes – including lassi – plus a sun-dappled terrace overlooking a charming square at the heart of the Village Popincourt, this is a popular spot for a tasty brunch which won’t break the bank.

One of several brocantes in the Village Popincourt, it’s lots of fun to browse here and the prices aren’t eye-wateringly expensive either. Whether you’re hankering after some retro crockery, a delicately beaded vintage handbag or an antique writing desk, you’ll surely find it within.

Previous Article Watch the Tour de France Arrive in Paris
Next Article In Conversation with Elizabeth Bard, Author of Picnic in Provence