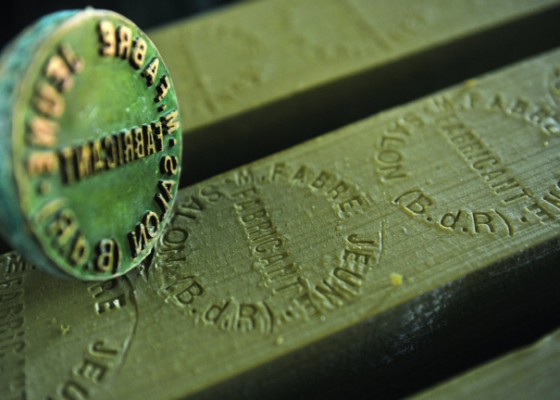 Few emblems of Provence – or of France – are as universally familiar as the tidy, olive-green cubes which are stamped Savon de Marseille. Mild and all-purpose, this olive-oil-based soap is among France’s most ubiquitous products, and it’s as gentle on your skin as it is on laundry, floors and even your houseplants. For generations, this little green cube has held a cherished place, not only in the south of France, but throughout l’Hexagone and beyond its borders. Savon de Marseille is also an essential for travellers who are looking for an easily transportable, authentic piece of Provence to bring home with them.

However, chances are – 80 per cent, to be precise – that the little piece of Provence in your bag isn’t authentic Savon de Marseille. The scores of shops and manufacturers who sell soaps emblazoned with a Savon de Marseille stamp will tell you is that their wares are ‘the real thing’ as they contain 72 per cent olive oil and are made in the Bouchesdu-Rhône département of Provence. But that isn’t the whole truth, according to the soap-makers Marius Fabre, and they should know, since 2015 marked the company’s 115th year of producing genuine Savon de Marseille. “The natural resources of Provence are ideal for soap making: abundant olive oil, soda and sel de mer from the Camargue salt flats”, says Laurence Clavier, the head of marketing and communications for Marius Fabre. “The local Savon de Marseille has been manufactured in Provence for a thousand years, but it was only during the time of Louis XIV that soap-making became a protected French heritage product.”

Marius Fabre, based in the small town of Salon-de-Provence, are one of only four savonneries to use the age-old techniques sanctioned by Louis XIV under the ‘Colbert edict’ of 1673, which required that all French trades form guilds and lay down a set of rules and standards for each one, formalising their expertise. For savonniers, this meant that, firstly, the soap had to be 100 per cent vegetable-based, and secondly, it had to be made in open-air cauldrons. The other three savonneries that still follow these age-old standards – La Savonnerie du Midi, Fer à Cheval and Savonnerie du Sérail – are all based in Marseille. Like Marius Fabre, they still use olive oil and a method which sees giant, open-air cauldrons overseen by a master savonnier. In 1900, when 22-year-old Marius Fabre set up his factory, he was just one of approximately 14 savonniers in Salon-de-Provence, a small town which had built up around the trade. Some 65 kilometres south-east lies Marseille, which boasted no less than 100 savonniers.

“During the Belle Époque, Salon-de-Provence was already a centre for soap-making,” Clavier confirms. “An entire neighbourhood grew up around the production of Savon de Marseille.”

Two open-air cauldrons and a few drying blocks were all Fabre needed to get started. Business was steady and when World War 1 broke out, his wife Marie took the reins, to ensure that production remained continuous. Upon Marius’s return, the company continued to thrive. the fourth generation to run the family’s business. photo: courtesy of Marius Fabre

“With the arrival of the railway in Salon, the town was growing quickly because of the new transport,” says Clavier, “not only for people to reach the area, but for the oils and supplies needed for soap making and for export.”

In 1927, Fabre moved the ever-expanding business to a larger premises in the centre of town, where it remains today, and acquired three enormous open-air cauldrons to use for the soap’s ten-day cooking process. These cauldrons, which are still in use at Marius Fabre, distinguish the real Savon de Marseille from those brands which would claim to be genuine.

In those days, making Savon de Marseille was a perilous process. Stirring the boiling soap over huge vats was dangerous, and required much strength and skill – in each savonnerie you’ll still see a statue of the Virgin Mary, which is meant to guard the workers against injury or even death. Enormous precision was also needed to determine the quantities of ingredients and their cooking times, which required the skills of a maître de savon. the statue of the Virgin Mary is meant to guard the workers against injury. photo: J Lipka

“Our recipe is a closely guarded secret passed down from each maître de savon to his apprentice,” says Clavier.

Jean-Pierre Denne of Marius Fabre is one of only three soap-makers in France who has the right to call himself a maître de savon, and the title took him 15 years to earn. At Fabre, this know-how is shared from one generation to the next – Denne studied under another master and in turn is training his own apprentice, who must also earn his title.

Denne’s job requires not only expertise but also patience, as the five-step ‘saponification’ process mostly consists of waiting and watching. After mixing up to 20 metric tons of caustic soda and olive oil – to a ratio that varies depending on the variety of soap which is being produced– the huge ceramic cauldron is heated to boiling, whereupon the mixture becomes a viscous mass resembling a bubbling swamp. After ten days of cooking, which is constantly overseen by Denne, whose trained eye can determine the correct cooking level of if anything is going awry at any stage of the process, a paste gradually forms. The resulting paste is washed several times, alternating salt and fresh water, in order to remove any residual impurities – this the process by which the soap earns the designation ‘extra pur’. As a final test to determine each batch’s purity, Denne actually tastes the paste – if it stings his tongue then another rinse is required.

The soap is then pumped upstairs, to drying rooms with wide-open windows and wall-to-wall concrete moulds which are dusted with talcum powder to prevent sticking. The molten soap flows like lava from moveable wooden troughs that have been in use since 1927, the only modern concession is that they’re now lined with stainless steel. Once the moulds are filled, the soap is smoothed like cake icing and left to dry for 48 hours, or less if Provence’s mistral winds are blowing. When it’s dry to the touch but moist enough to be malleable, the soap is precisely measured out using old sets of compasses– a process that’s yet to be improved upon – then cut into square, 30-kilo blocks and taken to the stamping room.

The most labour-intensive part of the job, lifting the cubes was once done manually. Now Denne removes only the first block by hand and the rest is done by machine.

The outer crust of each block is cut, revealing a moist centre that’s both pleasant to the touch and soft enough to be cut into long, rectangular bars weighing just over two kilos each. These are stamped by hand, on all four sides, with the company’s distinctive logos and the legend ‘extra pur’. Using a wire, the bars are then sliced into squares by hand and placed on racks to dry, a process that’s never really finished – like a fine wine, Fabre’s soap can age forever, as the oils it contains only become increasingly concentrated over the passage of time. Following the advent of petroleum-based soaps during the 1970s, the majority of the traditional savonneries in Salon-de-Provence and Marseille went out of business. Tours are still given of the graceful Belle Époque mansions in Salon’s Quartier des Savonniers, which were once owned by prosperous soap manufacturers but now house a variety of municipal offices.

Marius Fabre are the last savonniers in town to guard the old methods and scrupulously maintain the purity of their recipe, in accordance with the ‘Colbert edict’. The company’s now a fourth-generation family business and has been helmed by Julie and Marie Bosquet-Fabre, Marius’s great-granddaughters, since 2011. The sisters are determined to maintain the integrity of their product.

“You won’t find an inch-long list of ingredients on our labels,” confirms Laurence Clavier. “We still use only the three ingredients for the traditional 72 per cent olive oil soaps. And our ‘black’ Savon de Marseille, unlike other black soaps, which are made with linseed oil, is made with a very high concentration of olive oil.”

A patented process in continuous production for 115 years, the black soap comes in versions for the household, garden and body. Marius Fabre also uses high-concentration coconut and palm oils for their cosmetic soaps.

Since the 1980s, a surge in interest in environmentally-sound and gentle, healthy products for the body have caused people to take a second look at Savon de Marseille, which has resulted in a resurgence. Marius Fabre’s pure and natural soaps are once again highly sought after.

“Everything we make is natural and biodegradable,” says Clavier, “unlike most other Savons de Marseille, some of which are made with soap chips from China!” That’s why Julie and Marie, along with the three other remaining authentic manufacturers of true Savons de Marseille, have instigated a movement to win the right to add an IGP (Indication Géographique Protégée) label. This would guarantee that the soaps bearing the label have no added fragrance, colour or additives; follow the specific 1673 manufacturing process; and that they’re made in or around Marseille. Although Marius Fabre already carry the prestigious EPV (Enterprise du Patrimoine Vivant, or Living Heritage Company) designation, the company have no way of educating the public about their products, except through their factory museum and tours of their original Salon-de-Provence facility.

In addition to the famous Savon de Marseille, the ‘black’ variety, laundry and garden soaps, Marius Fabre have created a cosmetics line of 11 delicately scented soaps, a shampoo, a body wash and lotion, and hand cream, all featuring natural Provençal fragrances crafted in Grasse.

The fight isn’t over yet, but if Marius Fabre and the other savonneries prevail, it’ll be a major victory in the struggle to protect a unique example of French savoir-faire.

If you’re in Provence, the Marius Fabre factory and museum are open to the public and you can purchase their full range at a beautiful boutique on the premises. For further info, visit www.marius-fabre.com.

Why not join France Today on our tours of Provence? For more information visit our website.