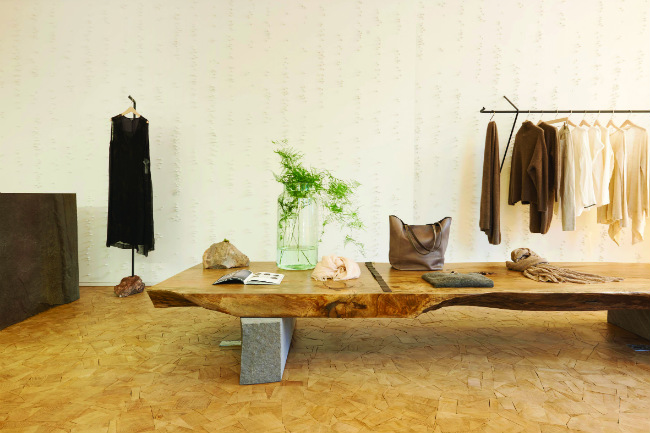 The ‘Haut Marais’ continues its ascent as Paris’s edgiest high-fashion neighbourhood, drawing famous names along with hip young designers and a slew of concept stores which are at the vanguard of the Paris fashion scene…

Paris and Tokyo have been busy reaffirming their mutual aesthetic appreciation: a half-dozen of the City of Light’s most sought-after tables are helmed by Japanese chefs who trained in the French capital’s top kitchens, and the blockbuster exhibit of 18th-century master draftsman and painter Hokusai drew record crowds at the Grand Palais. Opening on the heels of the Maison Wa – a sleekly minimal concept space near the Palais Royal which showcases the work of Japanese artists, artisans and designers – the Tokyo-based fashion label Pas de Calais launched its first Paris boutique, in a plum spot on the Rue de Poitou in the Haut Marais.

“I was always fascinated by the Pas-de-Calais region because it’s known worldwide for its lace, which I love. It’s also the gateway to Paris,” explains creative director Yukari Suda. Consequently, when Suda ended up staying at the Hôtel Pas-de-Calais in Saint-Germain-des-Prés on a revelatory trip to Paris, she took it as a sign.

The misty seaside region’s windswept landscapes and rugged cliffs were an inspiration for Suda’s unstructured separates, which come in a moody palette that’s dominated by deep blue-grays, charcoal black, coffee, taupe and lichen, and punctuated by deep jewel green and creamy white. The contrast of contemporary lines with an almost Victorian sensibility is a big part of the allure  – a high-waisted, belted blazer or three-quarter-length, belted wraparound coat in softest cashmere over a long, flowing skirt in whispery wool is a look that works anywhere. The label’s luxurious fabrics are textured but lightweight and beg to be layered, so you might pair a long, loose-knit cashmere cardigan with a pair of roomy woollen trousers which are so well cut that they drape rather than bag – and don’t forget a featherweight cashmere scarf to tie it all together.

The silhouettes are of the moment but Suda’s raw edges and layered contours veer more toward the rustic than the glamorous, which is good news for women who take their style with a big dose of comfort.

It’s a winning formula: take a minimalist, art gallery-inspired space to highlight a small but choice collection of chic and idiosyncratic clothes, accessories, housewares, books and CDs – plus whatever else your enviably stylish lifestyle might require – et voilà, a concept store is born.

Front de Mode, the newest addition to Paris’s evermore-crowded concept-store scene, is located at the western edge of the Marais, around the corner from the fabulous Musée des Arts et Metiers, in a neighbourhood that’s ripe for discovery. The boutique’s refreshingly down-to-earth and unpretentious – a killer sense of style doesn’t keep its amiable owner, Sakina M’Sa, from breaking the (chilly) mould by personally greeting visitors with a gracious smile. As a designer herself – look for her fabulous silk scarves and Blue Line collection of printed jumpers and T-shirts – M’Sa has an uncanny feeling for what’s of-the-moment, but with a touch of whimsy and fun (not to mention solidarity and ethics). Previous Article Learn French in San Francisco: France “Knights” Gabrielle Durana of EFBA
Next Article The Conquest of the Air at the Grand Palais