St Tropez: Another Side to the Côte d’Azur Glamour Spot 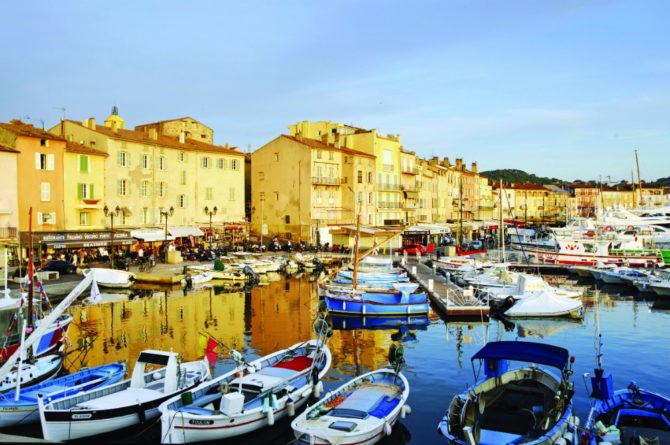 A recent trip to Saint-Tropez made me think how schizophrenic life on the Côte d’Azur can be. One moment supermarket shopping and picking up dry-cleaning, the next sailing into one of the most chic spots in the world to sip mojitos.

You don’t need to be a millionaire to enjoy Saint-Tropez, but it helps. Conspicuous consumption is the name of the game here, just as it is in Monaco, Cannes or any number of glamour spots on the French Riviera. But then what would ‘St Trop’ be without glamour, fast cars (that can go nowhere in the narrow lanes, so they stay lined up in the Port) and beautiful people? It is its raison d’être…

Even the beautiful people make you do a double-take. From behind I admired an elegant woman with beautiful blonde hair tumbling down her back. Tottering on her vertiginous heels, her figure was that of a 20-year-old. Upon turning around, however, she resembled more the star of the 1960s French horror film Eyes Without a Face than the ingénue Bardot. An expressionless, line-free visage gave her a curious doll-like impression, even though she was obviously heading at speed towards her twilight years.

Now don’t misunderstand me. I’ve long been an admirer of how French women fly the flag, regardless of their age. A trip to my boulangerie will always guarantee an encounter with a  woman of a certain age, manicured, coiffed and always elegantly turned out (if a little sequiny-sparkly – well, it is the French Riviera). It’s a ‘never give up’ attitude which you rarely see in other countries and I enjoy their spirit.

However, this contrast between the real and unreal – or even the surreal – on the Côte d’Azur can be perplexing. It is a bit like living on a fabulous film set but being the runner to the stars.

I met with quizzical looks in Saint-Tropez when I asked locals where I could find a more down-to-earth side to the village. Normal doesn’t sell T-shirts or over-priced bottles of champagne in the restaurants. Saint-Tropez is a business, a brand to be marketed and enjoyed for its exclusiveness. It does not want to give an impression of being ordinary.

But I still hold hope that reality does exist on the French Riviera – even in St Trop. You just have to know where to look. While there, I took a wrong turn (or a right one, depending on your viewpoint) and found myself walking through the cemetery down by the Mediterranean sea. There cannot be a spot more idyllic with its rows of graves. The dead of Saint-Tropez enjoy perhaps the best view of all. Roger Vadim the film director and ex-husband of Bardot is buried here. Vadim may have introduced ‘BB’ to the world in And God Created Woman but Bardot introduced him to Saint-Tropez.

A little further along, a beach sprang up, as if from nowhere. It was almost deserted except for a few boats which had dropped anchor in the crystal waters. This was old Saint-Tropez. Real Saint-Tropez. And nothing had changed much since the time when fishermen pulled in their catch in this sleepy village.

It made me think that on the Côte d’Azur you just need to walk a different path. And you will be pleasantly surprised, I promise you…