The Fabulous Museum of Romanity in Nîmes

For lovers of Roman history, the city of Nîmes in southern France is a must-see. Once a major metropolis in Roman Gaul, Nîmes today boasts a plethora of important sites: the beautiful Maison Carré temple (Thomas Jefferson used it as a model for the Virginia state capital building), a large and well-preserved amphitheater, a massive Roman guard tower, and more.

There are plenty of reasons to visit Nîmes and now here’s another: the Museum of Romanity that newly opened in 2018. This museum exhibits thousands of fascinating artifacts and covers over 2,500 years of life in the city. And it’s great for kids as well as adults. 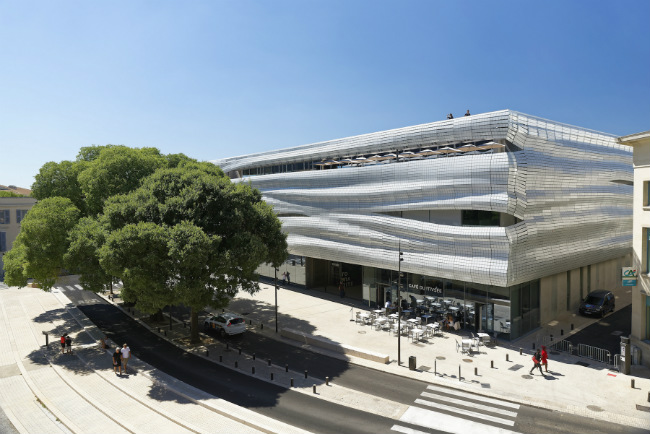 Designed by noted architect Elizabeth de Portzamparc, the museum is striking, with a silvery exterior that wraps around it almost like a toga. And it sits just across from the Roman amphitheater in the center of town, making for a dramatic contrast between old and new.

The interior is spacious and well lit and the museum makes outstanding use of technology to bring ancient history to life. There are dozens of multimedia devices throughout, including interactive maps, 3D reconstructions, audio and video clips, augmented reality and fun mini-games for kids. 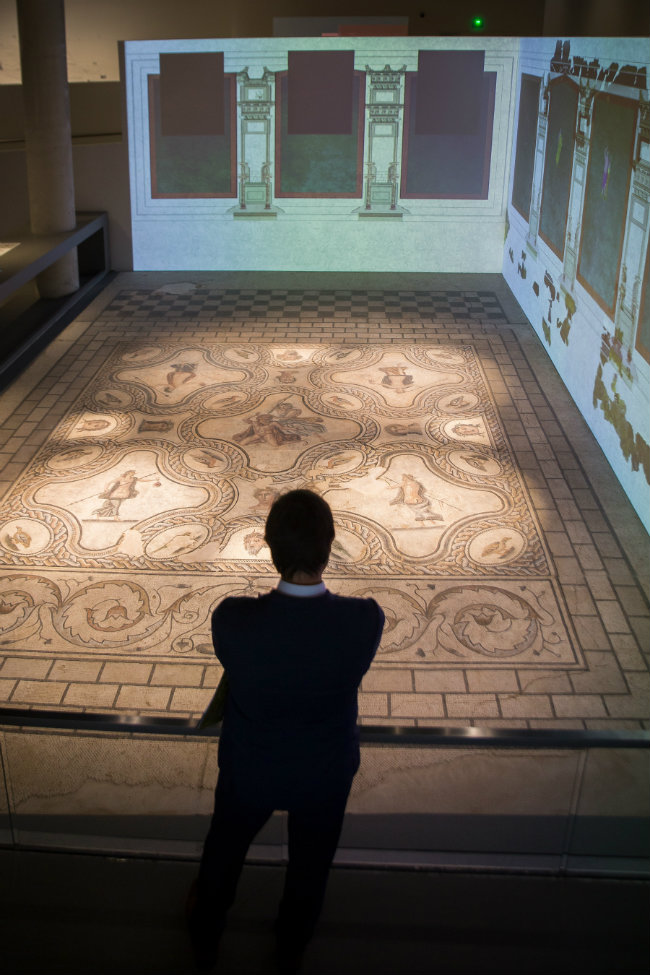 Your visit begins with the pre-Roman (Gallic) period, starting in the 7th century BC. The city began as an oppedum—a fortified town—and there’s a scale model of the oppedum and its ramparts, as well as a video showing how the town grew over the centuries.

The centrepiece of the museum’s pre-Roman section is the reconstruction of an actual Gallic house. Accompanying it is an interactive terminal with animated clips that show how people lived in the house—cooking and eating and sleeping and all the rest. The clips make what would have been a static and perhaps boring exhibit really come alive. 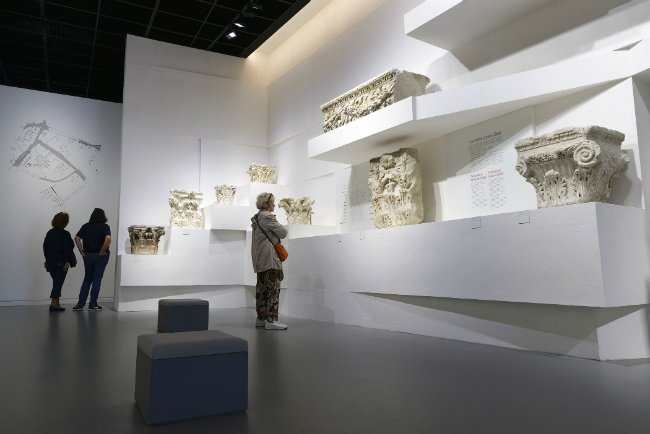 I should note here that the museum makes a real effort to keep kids engaged. Not only are there the mini-games and other multimedia activities, but also kids aged 7-12 are invited to solve the mysteries of the “Scola Romana.” They receive a booklet with nine questions and puzzles and those who correctly answer all nine earn a special badge. Clues are scattered throughout the museum and the first clue involves the bust of a Gallic warrior in the museum’s pre-Roman section.

At the base of the bust are etchings of an animal and kids are asked to identify what kind of animal it is. But the bust is up high and the carvings are faint, so the museum has created a reproduction and placed it on a lower, rotating table so that kids can turn and examine it. During your visit, you will almost certainly see youngsters throughout the museum, looking for clues and writing down answers in their booklets. 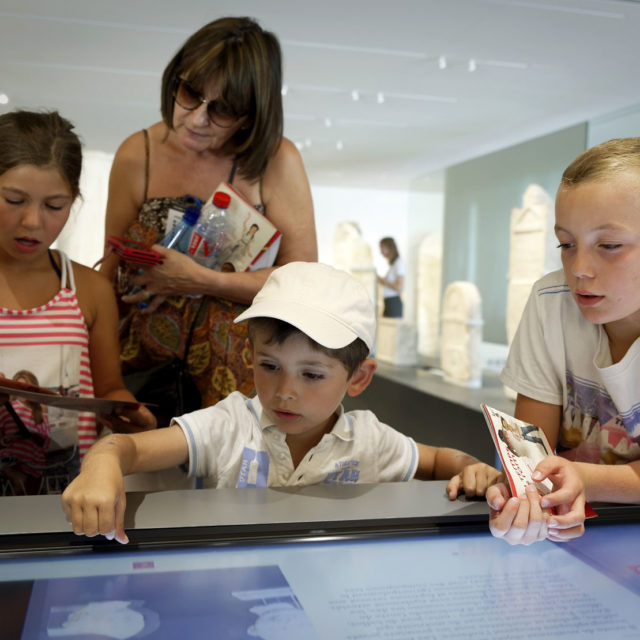 After the pre-Roman section comes the Roman collection, the largest and richest part of the museum. You’ll see imposing carved columns and porticos, beautifully preserved frescoes, coins in near-mint condition, marble and bronze statues, religious inscriptions, and on and on. 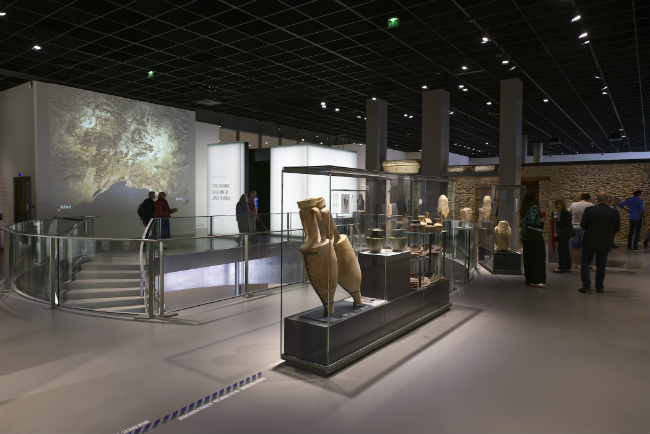 Roman architecture gets special attention, with multimedia stations that let you explore the city’s famous buildings in great detail. My favourite one explained how the Romans kept spectators in the amphitheater cool on hot summer days. I learned that not only was there an elaborate system of tarps that could be extended to cover the amphitheatre—almost like a retractable roof—but there were also huge water cannons that sprayed thousands of gallons into the air, creating a cooling mist over the crowd. Clever, those Romans!

The highlight of the museum is its magnificent collection of mosaics that once covered floors and walls in the homes of the wealthy. Several such mosaics were found just a few years ago during the construction of a parking lot in Nîmes. They are so well preserved that experts call them “the finest examples after those of Pompeii.” The most beautiful is the Pentheus mosaic, taking up nearly 400 square feet and showing the vivid and tragic end of the mythical Pentheus.

The most popular exhibit in the museum might also be the silliest. It’s a screen you stand in front of that lets you see what you would look like in a variety of Roman outfits…or with a Roman hairstyle. The day I visited, this was wildly popular with kids but I saw quite a few adults waiting in line as well. 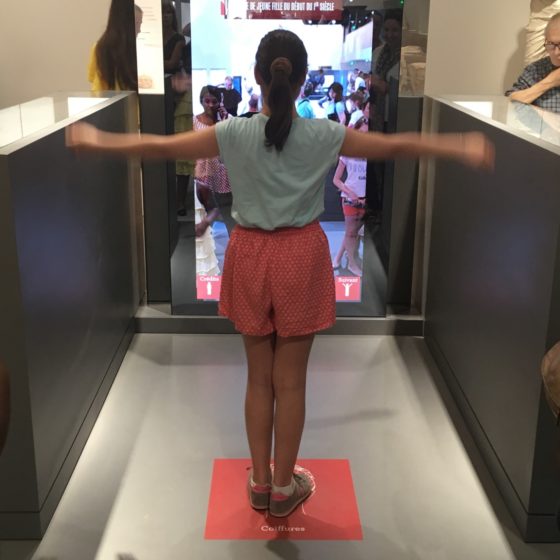 Following the Roman section of the museum are two smaller areas that explain life after the Romans. They show how monuments changed with the times, like the Temple of Diana becoming a church. There is also an excellent series of videos explaining how the city’s spring and Roman canals were restored and expanded in the 18th century to become today’s beautiful Jardins de la Fontaine (Fountain Gardens).

Besides the museum’s permanent collection, there is a special exhibition running through October 6 called Pompeii, A Forgotten Story. It tells the tale of Pliny the Elder, who was not only a famous philosopher and naturalist but also commanded the Roman fleet near Pompeii. When Pliny saw Mount Vesuvius erupt, he sent part of his fleet on what was perhaps history’s first military evacuation of civilians. The exhibition recounts this dramatic tale and gives a good sense of what life was like in Pompeii before the disaster.

For those who want to stretch their legs and get some fresh air before heading out, the roof of the museum provides wonderful, 360-degree views over the entire city.

Price of admission is 8 euros, with reduced prices for children, students, and families. The entry queue can be long so you should consider getting your tickets ahead of time. You can buy tickets here.

The museum has a casual café for quick bites as well as a restaurant called La Table du 2, run by a top chef. This restaurant serves very nice dishes and also has a reasonably priced 3-course daily special—reservations are recommended. There are also many restaurants and cafés within easy walking distance of the museum. 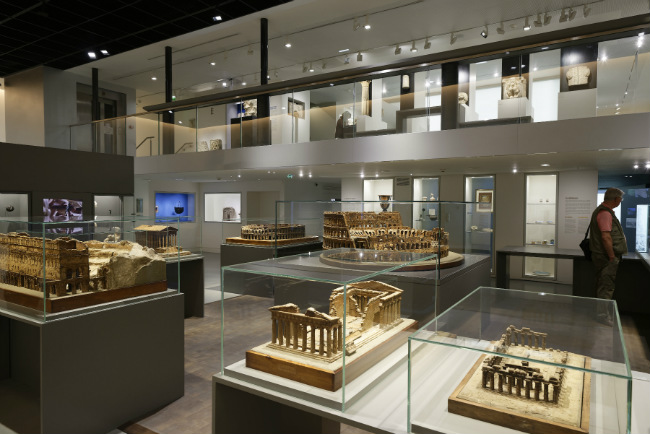