The King’s Menagerie: The Sun King’s Animal Kingdom at Versailles 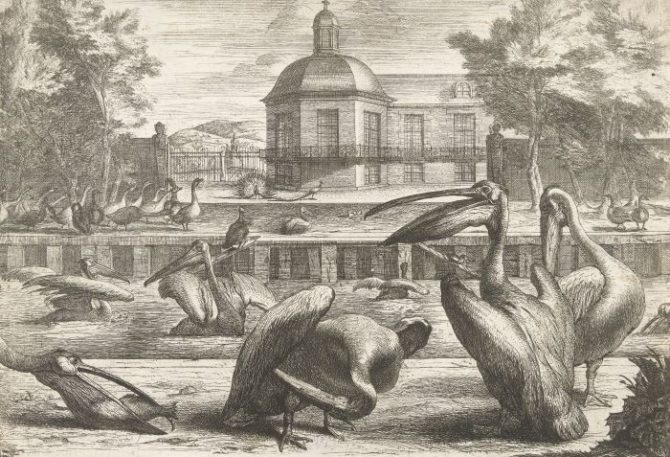 After so much beauty would you like to see
The order and power of the menagerie?
Abundance is everywhere in this house of kings
That shows no equal in any things.

From the Palace of Versailles, King Louis XIV commanded not only the kingdom of France but also the kingdom of animals. In the world-famous gardens, he created an extraordinary menagerie of beasts, a living, breathing allegory for the Sun King’s power over all he surveyed.

Many noble French households collected exotic animals in order to impress their visitors: Charlemagne and Louis IX both kept elephants at court; while the Duke of Anjou not only owned an elephant, but lions, camels, and monkeys. Some kept their collection of beasts frighteningly close to home – Francis I slept with a snow leopard at the foot of his bed.

By the middle of the 17th century, Louis XIV had adopted the pro-animal sentiment that permeated French culture at the time, but his attitude hadn’t always been so kindly. In the early days of his rule, the spirited young king was just as enamoured with blood sports as his ancestors had been. When Louis reached the age of 24, he turned instead to a classical, orderly and peaceful display of noble and exotic animals.

Louis’ Royal Menagerie was the first undertaking at the new Versailles. The layout was designed by architect Louis Le Vau in collaboration with Versailles’ head gardener André Le Nôtre. Le Nôtre selected a five-acre site in park’s south-west corner. It was a 20-minute walk from the palace itself, the location perhaps chosen for hygiene reasons – the King wouldn’t want the malodorous livestock too close to his living quarters. 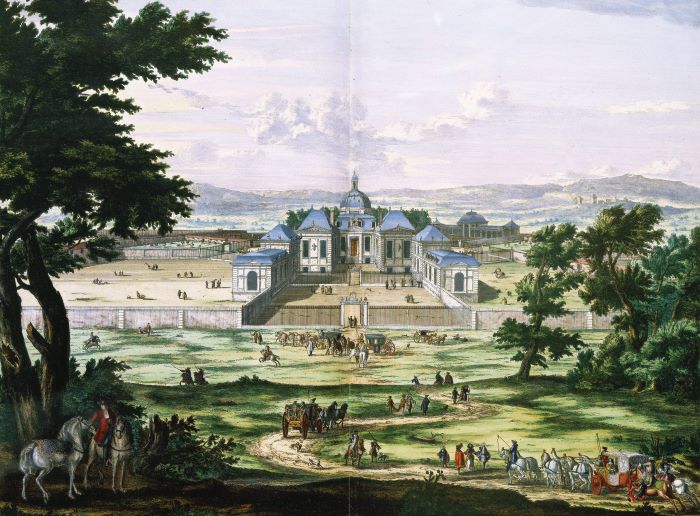 The menagerie is included on some of the earliest surviving maps of Versailles. Eye-witness accounts and engravings give us a good idea of what the Royal Menagerie’s pavilion and animal enclosures looked like. In 1663, Le Vau began construction of a small, château-like observatory which was to be the menagerie’s octagonal centrepiece. The iron balconies on the building’s second floor overlooked seven animal courtyards, which radiated outwards in sun-like spokes. The building itself made up the eighth element. Completed within a year, the animal palace cost 500,000 livres to build – enough to feed 12 peasants for 98 years.

Plans of the menagerie identified the principal inhabitants of the wedge-shaped enclosures. Le Vau’s structure divided animals according to species, the first time in history that a collection of zoo animals had been classified in such a way. This man-made system aimed to sidestep the violent tendencies found in the wild and serve instead as a model of grace. 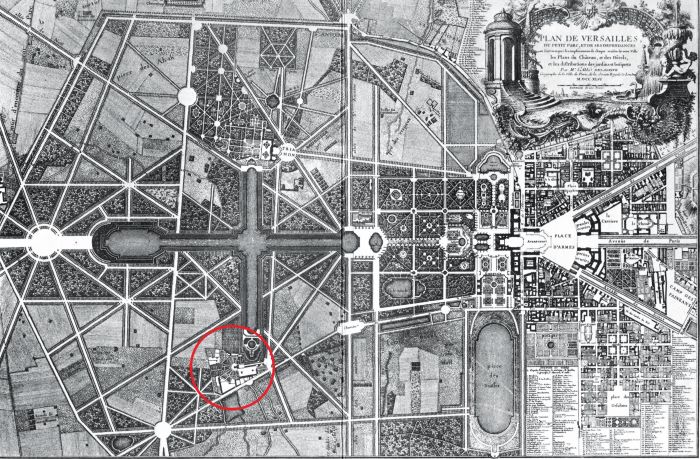 Elegant birds civilly ruled the roost at the Royal Menagerie. The Quartier des Demoiselles was named after the lady-like cranes it contained, along with an aviary of over 49 strange and marvellous species of birds. Ostriches had a sandy enclosure to suggest the desert; the aquatic birds had a pond; and Asian birds had green and aromatic plants. The Cour des Pélicans also housed flamingoes and wild ducks, while Le Rond-d’Eau enclosed a wetland habitat for storks, herons and other wading birds. Horn-billed cranes and eagles lived incongruously with porcupines and foxes in this cacophony of noise. An elephant and a camel were joined at the end of the 17th century by lions and a rhinoceros. The Basse Cour contained domestic farm animals destined for the royal kitchens and, thereafter, the royal dining table.

Stocking the Versailles menagerie was a complex and expensive exercise. To exhibit specimens like African lions or Brazilian parrots, arrangements had to be made first to acquire and then to adequately transport, feed and house them. Obtaining animals like this required expeditions to other parts of the world.

Governors of the French colonies were instructed to obtain rare animals for the zoo. The governor of Madagascar sent a cassowary, a dangerous clawed bird known for its violent temperament. The East India Company was asked to bring exotic species with them on their return voyages from Asia, Africa, and the Americas. One such animal wrangler, instructed by the King to venture to North Africa, made 40 trips between 1671 and 1694, returning with more than 800 birds, including 103 ostriches, plus exotic gazelles, goats and sheep. Some of the animals that found their way into the Menagerie were diplomatic gifts from foreign rulers. The King of Siam offered Louis XIV three crocodiles, while the King of Portugal, Pedro II, sent him an elephant. One of the most popular animals at Versailles, it attracted great numbers of visitors, scientists and artists. When it died in 1681, its dissection was a major scientific event. It was only then discovered that the creature was not a male, as the keepers had long supposed, but a female elephant. 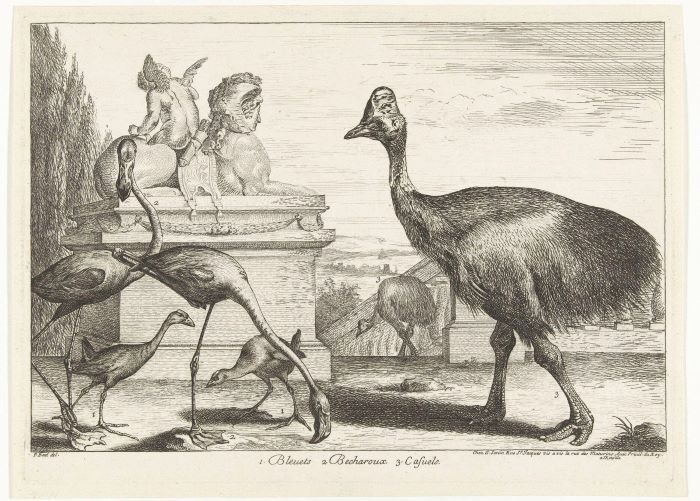 Louis himself often updated an itinerary titled Manière de Montrer les Jardins, which park guides followed to the letter. The king wanted his guests to be overwhelmed by the thrill of the spectacle. On the royally-recommended tour, the menagerie was reached via Versailles’ Grand Canal. On special occasions guests were treated to a simulated Mediterranean voyage along the canal, travelling to the menagerie in miniature frigates crewed by costumed sailors or serenaded by musicians in gilded Venetian gondolas. At the gates of the menagerie, visitors were obliged to admire the patterns and perspectives offered by Louis’ majestic gardens.

The architecture of the menagerie artfully concealed the animals from the guests’ view until they could be seen in their full glory. A description of Versailles written in 1674 by the King’s personal secretary, André Félibien, offers a short description of what he saw at the Royal Menagerie.

“The principal dwelling is an octagon figure, and contains only a Salon … surrounded by a courtyard which is also an octagon figure; closed iron gratings separate it from seven other courts. This Salon is also surrounded by a balcony from which you can see these seven courtyards which are filled with an infinity of very rare birds and an incredible quantity of foreign and wild animals of all species.” 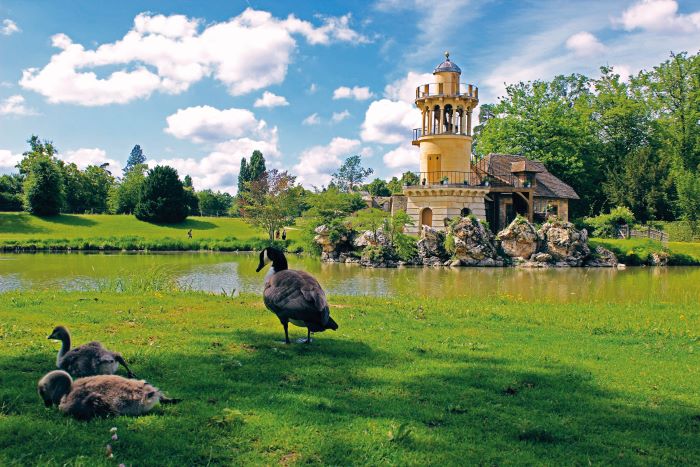 Madame Madeleine de Scudéry also recorded her impressions of the menagerie: “From the Salon one can see seven different enclosures filled with all sorts of birds and rare animals; their portraits are in the gallery, in order to prepare one for what one is about to see.” Akin to interpretative panels in a gallery today, these previews were faithfully painted by Flemish painter Nicasius Bernaerts, who recorded on canvas all new creatures arriving at Versailles. The Musée de la Chasse et de la Nature in Paris displays some of his paintings.

Back in 1653, the teenage Louis Quatorze made his first dazzling appearance before the court in the costume of Apollo. He wore a golden wig and a jewel-laden plumed headdress that emulated the birds he would grow to love. A solar ray motif burst from his embroidered tunic and little suns blazed from his garters and the buckles of his dancing shoes. The young Louis discovered that when he danced, all troubles and hostilities melted away. 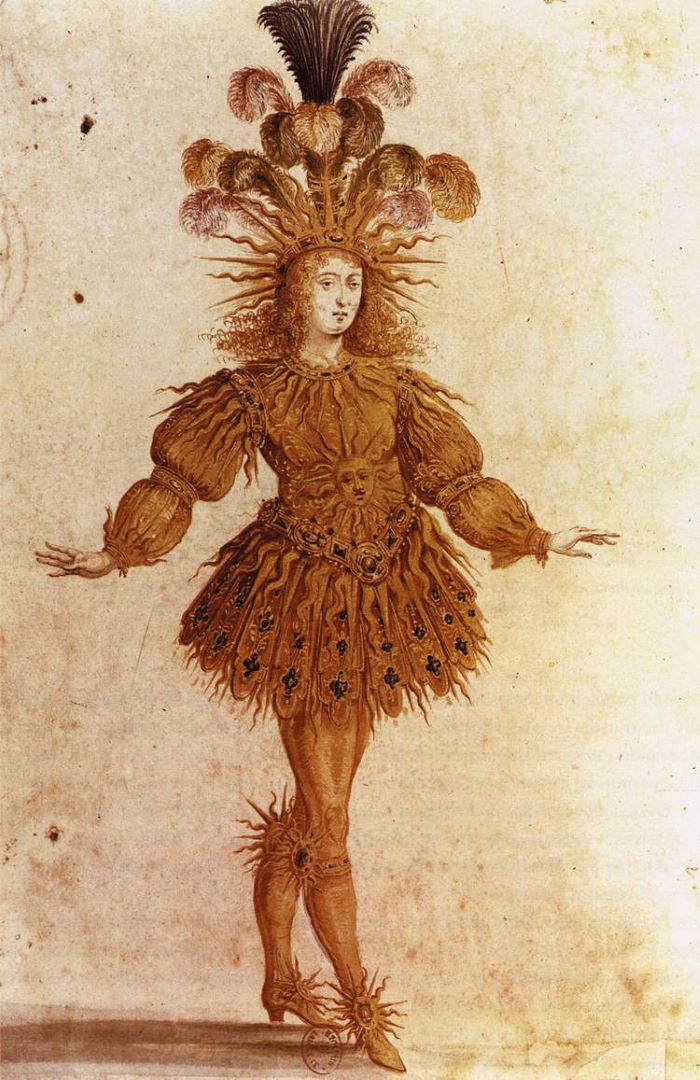 Louis, not surprisingly, adored the theatre, but in the early stages of renovation, his grand spectacles took place in Versailles’ expansive gardens. Famed for their equestrian pageants, musical galas, fireworks and fountains, the royal extravaganzas made use of the menagerie’s residents.

The most elaborate of the festivals was the six-day fête that included the first collaboration of the playwright Molière and the Superintendent of Royal Music, Jean-Baptiste Lully. Called Les Plaisirs de l’ Île Enchantée, Louis staged the festival in the May of 1664, ostensibly honouring his mother and his new wife, although it was discreetly dedicated to his mistress, Mademoiselle de La Vallière.

The king headed the procession and was followed by a ballet of the Four Seasons. Spring pranced in on a Spanish horse surrounded by dancing gardeners. Summer controlled a group of lithe and leaping harvesters from the back of an elephant. Autumn, astride a camel, was followed by grape pickers, and old men bearing rare bowls of ice accompanied Winter, who was precariously perched on a bear’s back. The menagerie and its creatures were widely accessible to the paying public. As well as Molière, the playwrights and poets Jean de La Fontaine, Jean Racine, and Nicolas Boileau were among the many who came to satisfy their curiosity. 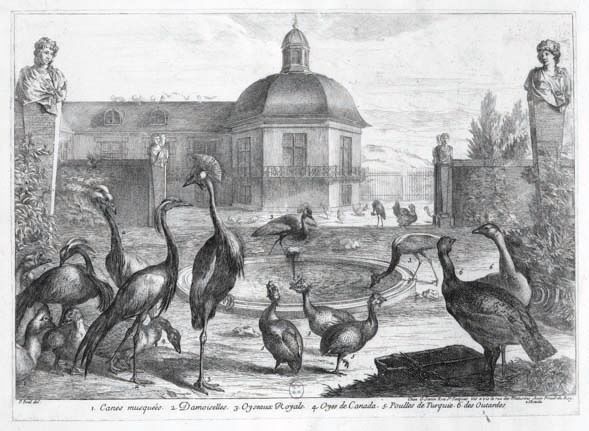 Near the end of Louis XIV’s reign, upward of 40 coaches a day, jostling with scores of eager visitors, made the eight-hour round-trip from Paris.

Before the menagerie’s ultimate demise – after Versailles had passed through the hands of King Louis XV – it was home to 239 species of birds, 123 mammals and 10 amphibians.

At its inception, the menagerie was praised as a spectacular display, but by the late 1700s the prestige of collecting wild animals was fading.

The menagerie came under attack during the French Revolution and its inhabitants were either set free, used for food, or sent to the Jardins des Plantes in Paris. Today within the Jardins, the collection of the Muséum d’Histoire Naturelle includes some of the preserved specimens from the Royal Menagerie.

Previous Article École internationale de boulangerie: The Students Using Their Loaf
Next Article Book Review: The Spy Who Inspired Me By Stephen Clarke