You Can Have It All in Languedoc-Roussillon 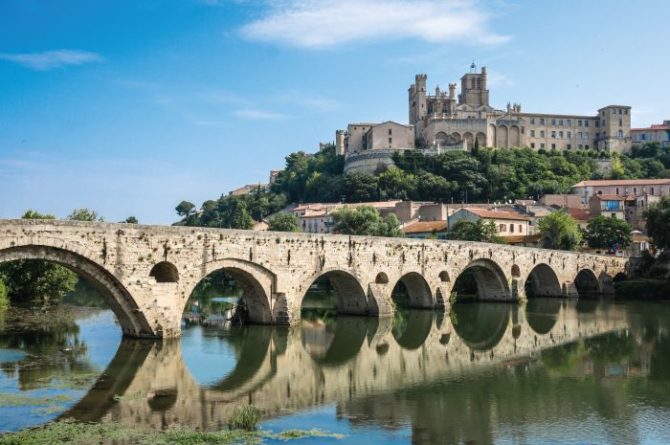 A little bit Massif Central, a little bit Pyrenean and very much Mediterranean, the traditional region of Languedoc-Roussillon is a land of ever-intriguing contrasts, as discovered by Dominic Bliss.

From the Rhône delta and the southern edge of the Massif Central, all the way down to the Pyrenees and the border with Spain, the old region of Languedoc-Roussillon is a vast sweep of territory that includes thriving medieval cities, hundreds of hilltop villages, glorious Mediterranean beaches, castles, vineyards, mountain ranges and some truly wild countryside where you might wander all day without seeing another soul. 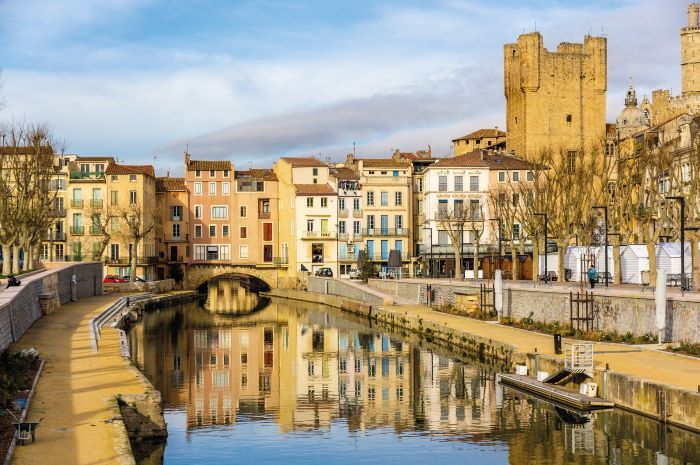 Although nowadays it has been subsumed into the larger administrative area of Occitanie, most locals still call it by its original name. It comprises five départements – Lozère in the north, then Gard, Hérault, Aude and, finally, Pyrénées-Orientales in the far south. To call this a land of contrasts is an understatement. Most visitors arrive into the major cities, many of them adorned with Roman or medieval architecture. So this is a good place to start. 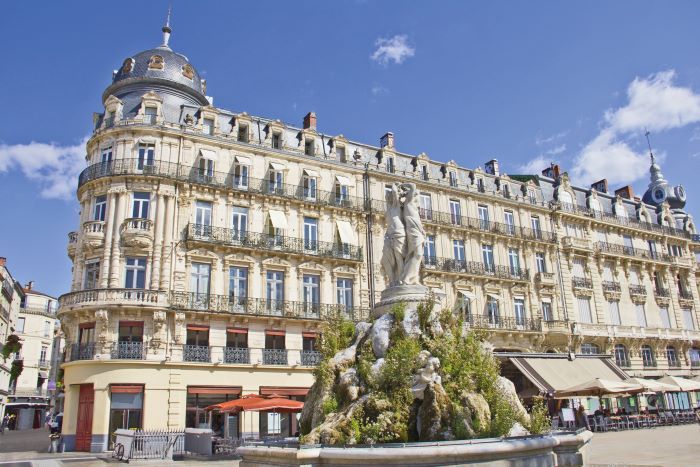 Nîmes is often called the ‘Rome of France’. Two thousand years ago this was one of Roman Gaul’s key cities, as you’ll discover if you visit Les Arènes, the best preserved amphitheatre in France. Built around 100BC, its oval arena, encircled with two tiers of columns and arches, once echoed to the roar of 24,000 spectators, baying as they witnessed gladiator fights and public executions. Nowadays you can watch concerts, shows and gladiatorial re-enactments – the latter without the real blood and guts, though. Most years, Nîmes stages bullfighting festivals, or ferias, in February, May and September. Hundreds of thousands attend the biggest, the Feria de Pentecôte, on the Whitsun weekend, for the music, the dancing and the sometimes gory bullfights at Les Arènes. 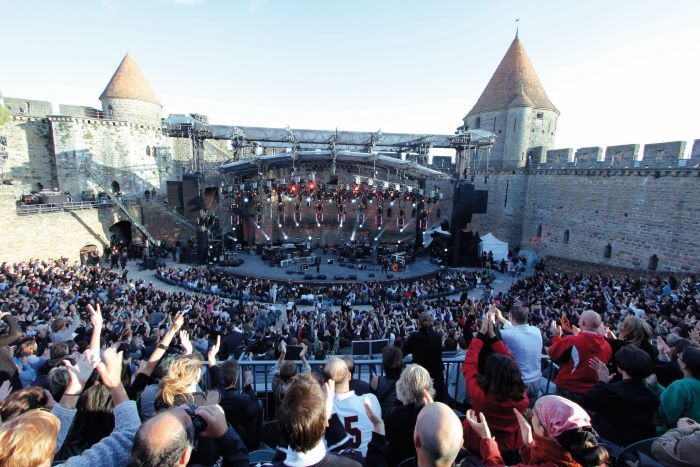 Nîmes’ other claim to fame is that it is the birthplace of the world’s favourite trousers. The word denim derives from the expression ‘de Nîmes’, as the textile was first manufactured in the city’s mills and later exported to the United States, and eventually to the entire planet.

Some 20km northeast of Nîmes is the world famous Pont du Gard, a three-tiered, 50m-high aqueduct across the River Gardon, dating from the first century AD. Its Instagrammable silhouette is amazing enough, but if you really want to be astounded, consider this: when the Romans first built it to transport water hundreds of metres across the river, they engineered it so precisely that the height difference between one side and the other is just 2.5cm. Modern-day plumbers with their lasers would struggle to achieve that! 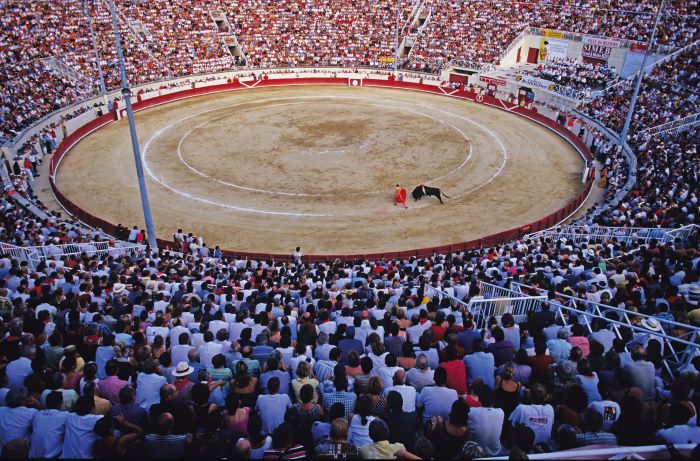 Southeast of Nîmes is the larger and busier Montpellier. This is certainly the most dynamic city of Languedoc-Roussillon, offering year-round cultural events, intriguing shops, buzzing nightlife and, just down the road, sandy beaches – avoid the busier La Grande-Motte and Palavas-les-Flots and opt instead for the much calmer Pointe de l’Espiguette. To get a flavour of the city’s joie de vivre, head for the vast open square known as Place de la Comédie, where the city’s youthful population (average age 25, apparently) like to party. Rectangular in shape and paved with marble, it’s surrounded by cafés, with a fountain at its centre. To get a real taste of Montpellier’s past, take a tour of what locals call the hotels particuliers. Originally private mansions of the very wealthiest Montpelliérains, there are 80 or so of these dotted around town, many with gorgeous doorways, staircases, balconies, balustrades and courtyards. The tourism office offers guided tours. 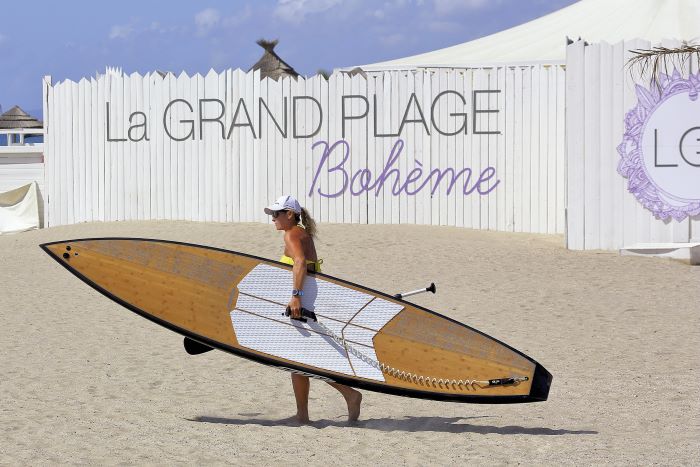 In midsummer the cloying heat descends on this part of the Midi. To escape the worst of it, head for the seaside city of Sète. Bordering the Bassin de Thau lagoon, and boasting many canals (including the mighty Canal du Midi which ends it journey across southwest France here), it likes to call itself ‘the Little Venice of Languedoc’. There are enough seafood restaurants here to satisfy any gourmand. A great time to visit is in August when teams of rowers take to their boats and propel themselves full speed into each other, with jousters doing their utmost to bump opponents into the water with huge jousting sticks. 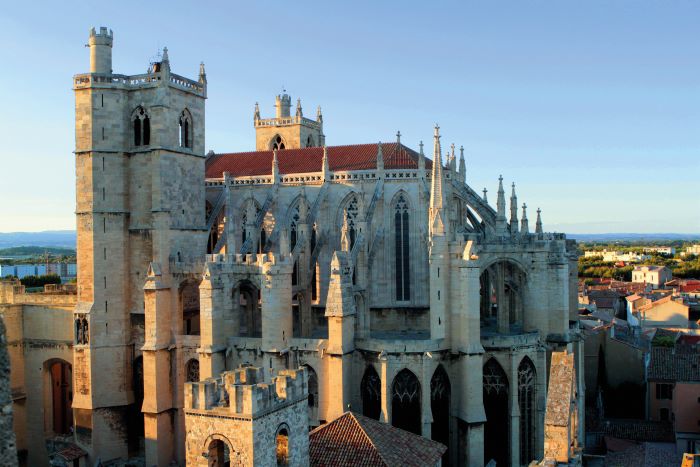 Continue round the Languedoc-Roussillon coast, and first you come to Béziers, a great base from which to explore the Canal du Midi. There are hundreds of boats available to hire, ranging from short day-trips to self-guided multi-day journeys along the entire length, as far as Toulouse. For most boats, you don’t even need a licence. Built in the 17th-century, the canal was a major feat of engineering which eventually linked the Mediterranean with the Atlantic (via the Garonne River in the west), avoiding the need to pass round the Straits of Gibraltar. 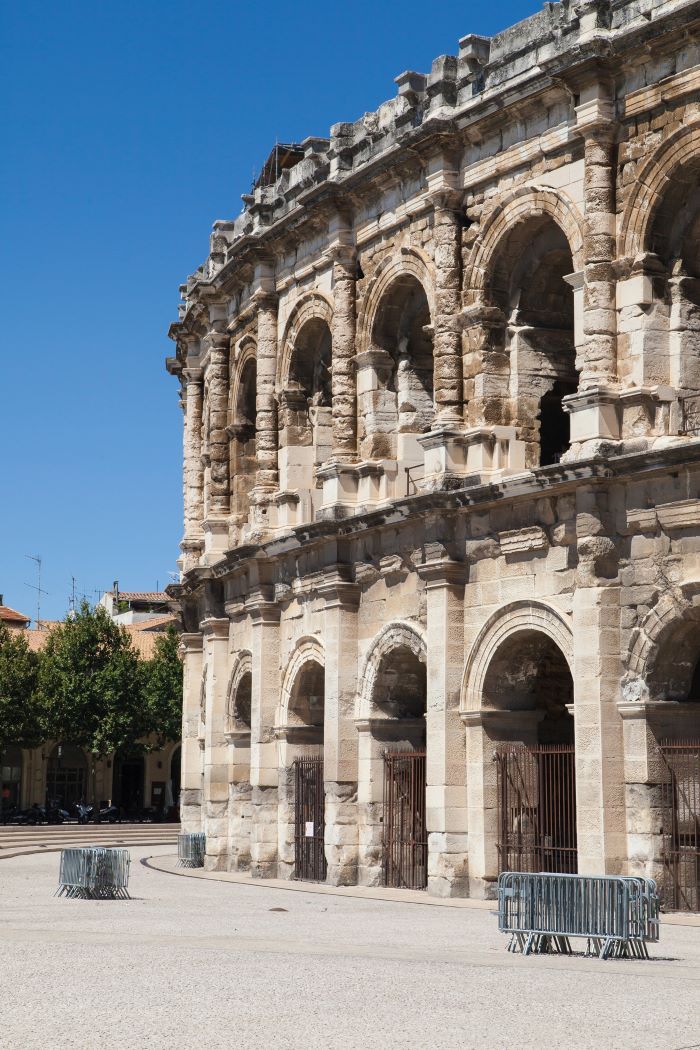 The Roman amphitheatre in Nîmes © Shutterstock

Just south of Béziers is Narbonne. Two millennia ago, this was a major Roman city, as you’ll find out if you visit the new Norman Foster-designed museum of Gallo-Roman antiquities, Narbo Via. 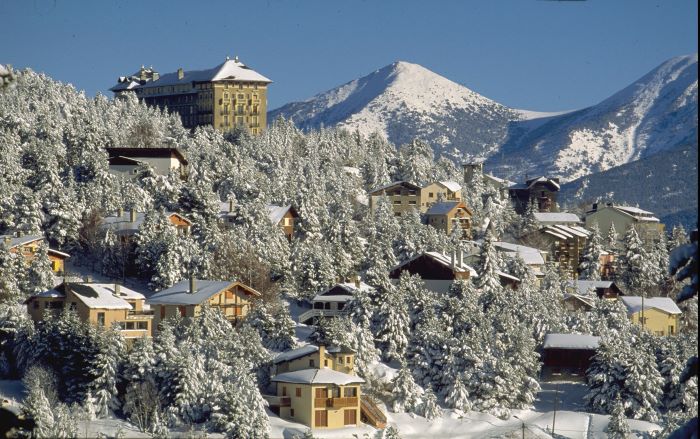 Further round the coast, almost as far as the Spanish border, you eventually reach the city of Perpignan. Now you’re into Roussillon proper, where if you listen carefully you might hear Catalan spoken on the streets, often from the mouths of refugees from the Spanish Civil War or their descendants. This is a good base from which to head into the Pyrenees (for hiking in summer or skiing in winter), or to the beach towns of the Côte Vermeille. Among the latter, the standout destination is Collioure which once attracted the likes of Matisse and Picasso. Many artists still ply their trade here today, inspired by the intense light shimmering off the orange rooftops and the Med lapping at its shoreline. This is one of the warmest and driest regions of France, where spring comes early and summer lasts into November. 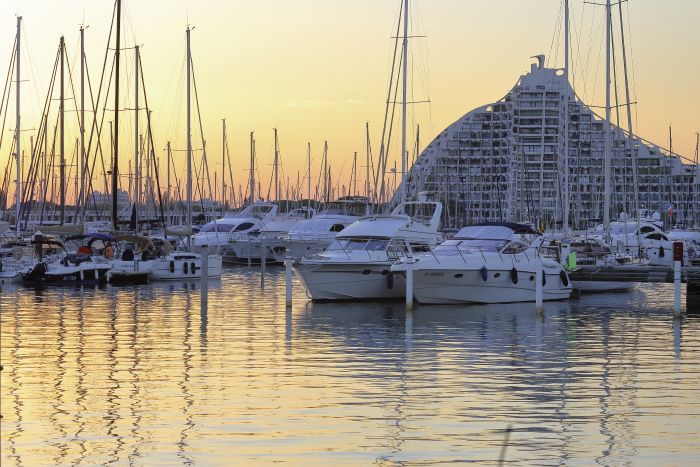 Now it’s time to venture into the region’s interior. Very quickly, you get the feeling you’re stepping back in time. The city of Carcassonne is unmissable. The main attraction, and the reason over four million tourists come here every year, is the Cité – a picture-perfect medieval citadel, built on a spur of rock, surrounded by 3km of concentric crenellated ramparts, interspersed by 52 towers. Inside is a labyrinth of cobbled lanes and courtyards, with plenty of kitsch shops and restaurants designed to part you from your hard-earned cash. Deservingly, though, the citadel enjoys UNESCO World Heritage status. 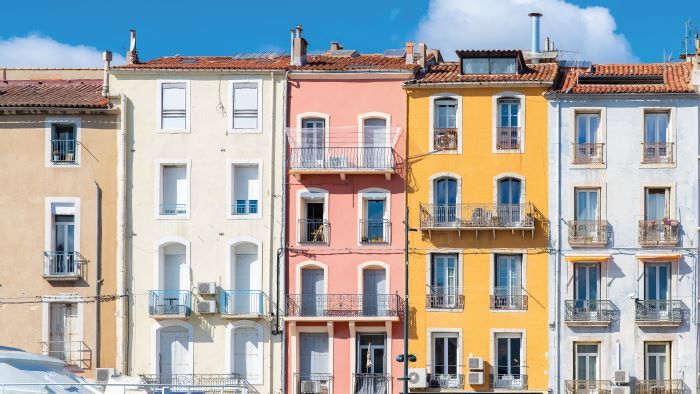 The colourful houses in Sète © Shutterstock

A few kilometres west of Carcassonne is the town of Castelnaudary, considered the spiritual home of the famous French dish cassoulet. La Grande Confrérie du Cassoulet de Castelnaudary (the Great Brotherhood of the Castelnaudary Cassoulet), founded in 1970, suggest their famous dish first came to life during the Hundred Years’ War. “According to legend, during a siege of Castelnaudary by English forces, the townspeople, threatened by famine, threw together everything they had in order to feed their own soldiers: lard, pork, beans, sausages and meats were all cooked up in a huge bowl,” they explain. “Reinvigorated by the meal, the besieged soldiers drove the English out of region and all the way to the English Channel!” 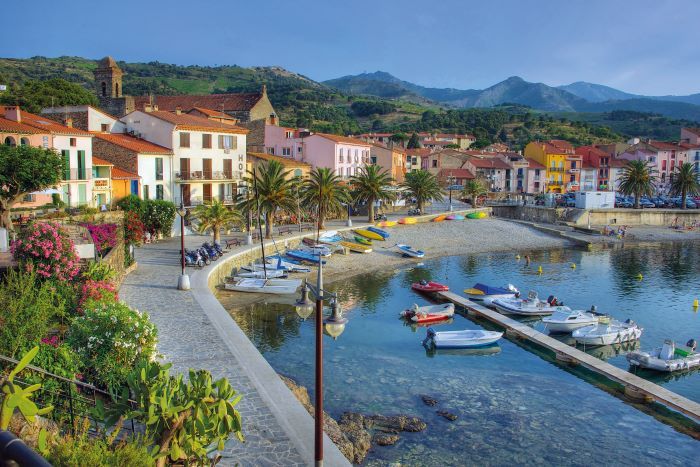 Over the centuries, many wars have made their mark on this region. Perhaps the most indelible mark of all are the dozens of Cathar castles, built by the persecuted Christian sect of the same name. Often perched on rocky outcrops, some have been renovated while others have crumbled into the surrounding countryside. Among the most impressive are Château de Puilaurens, Château de Quéribus, Château d’Aguilar and, perhaps the most famous of all, Château de Peyrepertuse. 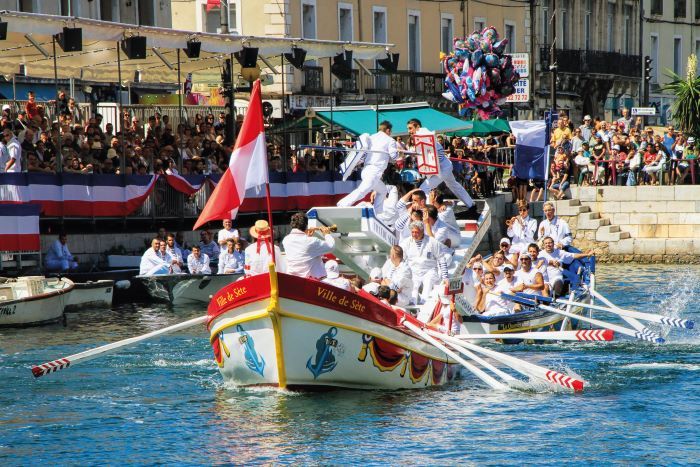 Sète, known as ‘the Little Venice of Languedoc © Shutterstock

The more you explore Languedoc-Roussillon, the more you notice the proliferation of vineyards. The scale of viticulture here is quite astounding, helped by the long summers and mild winters. At the last count, there were nearly 3,000km2 of land dedicated to growing grapes. Some of the coastal appellations include Fitou, Corbières and various Muscat varieties. Further inland you have Minervois, Saint-Chinian and Faugères. In between, there are thousands of vineyards producing the more medium-quality Vins de Pays d’Oc. Lower down the quality scale are the light red vins de tables which hail from the vast, arid plains between the cities of Narbonne and Montpellier. 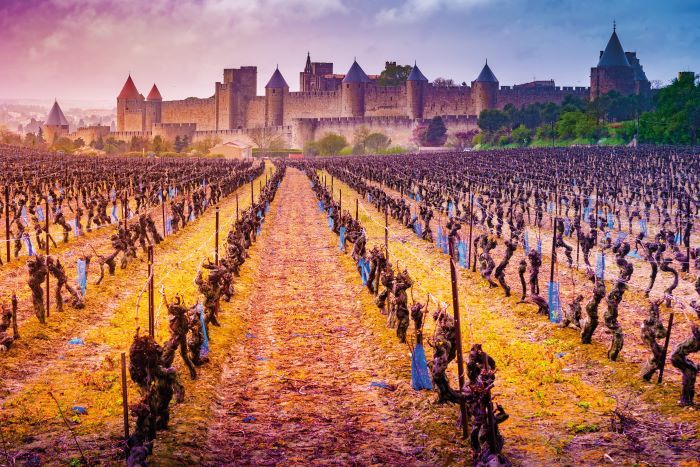 The magical sight that is Carcassonne © Shutterstock

The further north you venture into Languedoc’s interior, the wilder the terrain becomes. If you’re particularly adventurous, you could try hiking sections of the Chemin de Stevenson. Made famous by the Scottish author Robert Louis Stevenson, who wrote about his travels with a donkey along this route, it is now called the GR70. It zigzags 120 miles across the Cévennes mountains, much of it within the Lozère and Gard départements. It was all the way back in 1878 that Stevenson made his famous journey, with his notoriously stubborn donkey Modestine. Up in the high hills of the Languedoc, he marvelled at the remoteness and beauty of the region. 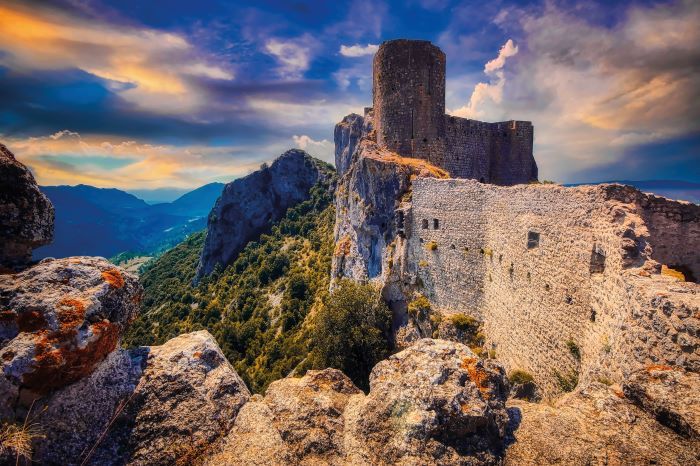 Cathar castle of Peyrepertuse, high in the Pyrenees © Shutterstock

“As strange to my surroundings as the first man upon the earth, an inland castaway,” he wrote. “Peak upon peak, chain upon chain of hills ran surging southward, channelled and sculptured by the winter streams, feathered from head to foot with chestnuts, and here and there breaking out into a coronal of cliffs. From time to time a warm wind rustled down the valley, and set all the chestnuts dangling their bunches of foliage and fruit; the ear was filled with whispering music, and the shadows danced in tune. And next moment the breeze had gone by, and in all the valley nothing moved except our travelling feet.”

Much of the countryside Stevenson crossed was so wild that even today, 143 years later, it looks and feels almost the same.

Previous Article French Film Review: Madame Claude
Next Article Where to Stay and Eat in Normandy in 2021