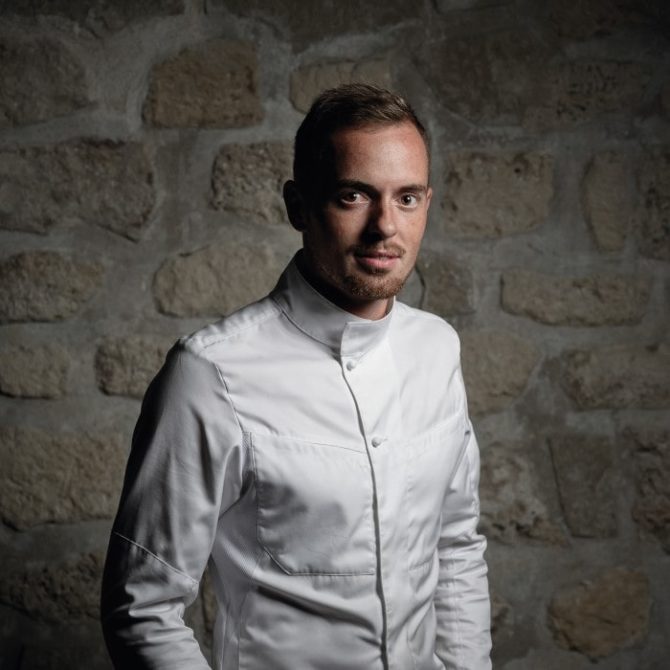 There was something decidedly poignant about arriving at 6 rue Bailleul, an address in a side street in Les Halles in the heart of Paris, on an Indian summer day. This vest-pocket space was created by Chicago-born chef Daniel Rose for his restaurant Spring almost 20 years ago, and in those days, it was one of the toughest reservations to land in the French capital. Eventually, Rose closed it, however, and went off to cook at Le Coucou in New York City.

Now it’s the incubator for another remarkable young talent, chef Tom Meyer, 29, who previously worked as sous-chef to Anne-Sophie Pic at her Michelin three-star restaurant in Valence and who was the runner-up finalist in the 2019 Bocuse d’Or cooking competition in Lyon. Meyer was recruited by restaurateur Stéphane Manigold, who’s one of the most astute judges of culinary talent in the French capital today (his other restaurants include the superb Substance, Contraste, Maison Rostang and Bistrot Flaubert).

Lunching with a friend, we were hypnotised by balletic grace of the team of seven working in the small open kitchen just a few steps from our table. Their intense concentration was as fascinating as their ability to remain almost heroically coordinated in such a compact space. In retrospect, their silence was also remarkable, since the only sound we heard during our spectacular meal was the soft voice of our very charming waitress.

Granite is the most important opening in Paris this year for a variety of reasons. It signals a changing of the guard as a new generation of chefs like Tom Meyer are hired to take over the kitchens of Paris, and it’s one of the most ambitious launches in what I would cautiously but hopefully describe as the post-Covid era of French cooking. To wit, the trauma of the pandemic has definitely changed our appetites and what we want to eat. But how? That’s what we discovered during a meal that was so lyrically delicious and beautiful that I’m still thinking about it in the same way that one reflects on a great poem long after you’ve read it. 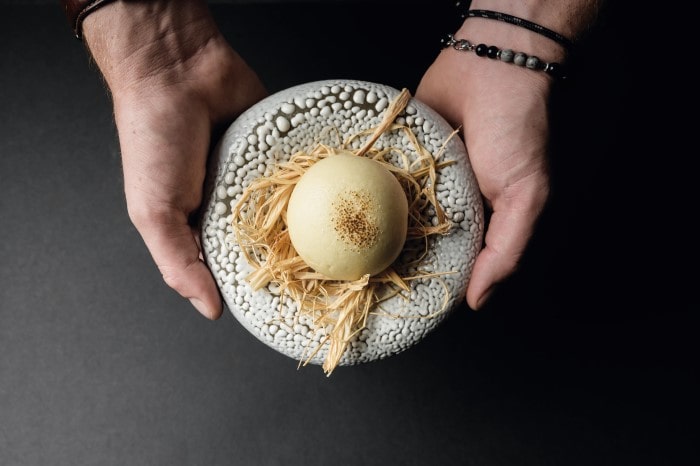 Our first course was a grilled cèpe mushroom with a sabayon flavoured meadowsweet, a wild herb, and a sauce of deeply reduced mushroom jus and white miso. If you’ll allow a literary reference here, this dish would be John Keats’ To Autumn, since it expressed the season with such delicate, umami-laced earthiness. Next up were sardines with haricots vert, matcha-seasoned pistachio oil and a salad of seaweed, an intriguing cameo of tastes that worked with the precision of a Swiss watch despite initially seeming somewhat incongruous.

A giant gnocchi filled with steamed shellfish and garnished with cockles in a lemony sauce, fennel springs and Vietnamese coriander was pleasant, but expecting something firmer, neither of us much liked its doughy texture. Sea bream with kale in apple juice with a gelée of lovage was a lovely and winsomely elegant dish, however, and then Meyer flexed his muscles with a sublime roast pigeon in a sauce of its own deeply reduced jus with green cardamom and combawa, garnished with puffed millet and cocoa nibs. Earthy and sensual, this was a dish that might have delighted Lord Byron. Desserts began with a homey rice pudding wrapped in rice roll with Mirabelle plums stewed with vin jaune, a sexy nod at the chef’s home region of the Jura in eastern France, and then a lush cold mousse of Belizean chocolate, with salicorne and a hot chocolate sauce infused with lemon and orange leaves.

So what we want now, according to Meyer, is sensual but healthy dishes that celebrate the natural tastes of the highest quality seasonal ingredients while remaining legible and apparently uncomplicated (even if they really are). In his modern French ode to the pleasures of gastronomy, there are two other themes – the relief of not being confined to one’s own kitchen day in and day out any more and the hilarious happiness of being alive. Meyer is a tremendously gifted chef who will doubtless continue his ascent as one of the most influential talents of his generation.