Le Balcon: The Restaurant at the Philharmonie de Paris 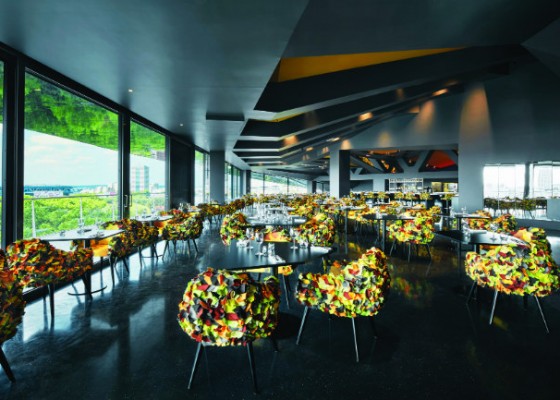 Whatever you think of Jean Nouvel’s science fiction-inspired architecture, the recently-opened, €1-billion Philharmonie de Paris in the 19th arrondissement’s Villette quartier has completely changed the geography of the city for music-lovers. Now that the much cherished and, for many Parisians, more convenient Salle Pleyel concert hall in the 8th arrondissement has closed, it’s necessary to travel to this relatively remote location on the capital’s north-eastern edge for the pleasure of classical performances and many other types of music.

Since many of the French capital’s music-lovers live in affluent western or Left Bank arrondissements, there’s something of a logistical mismatch to be overcome for many, and this is why the quality of the cooking at Le Balcon, the new 150-seat restaurant at the Philharmonie, is so important. Many concert-goers will be arriving by car, and since dining options in the vicinity are limited, they’ll likely plan to enjoy a quick bite before the show or stay for a sit-down meal after the performance. Le Balcon is sure to play a major role in the vital process of the Philharmonie winning the affections of Parisians and, happily, it does so with delicious skill.

Talented young chef Karil Lopez has designed a menu that’s a sophisticated slate of alluring contemporary French comfort food. Served in a low-lit dining room furnished with widely-spaced tables, surrounded by colourful, shaggy camouflage-like upholstered chairs and offering an off-beat view of Paris from afar, the menu is organised around three main products. Upon my visit, these were cod, Ancenis chicken and Charolais beef, which are offered as both starters and main courses in different preparations.

Among the best dishes sampled during a recent meal were an individual tourte filled with beautifully seasoned, minced Charolais beef, which came with a silky, mahogany-colouredjus de boeuf, and was a very satisfying starter; roast cod with chorizo emulsion; roasted chicken breast with Parmesan cream; and a very refreshing citrus-fruit aspic with Muscat wine. For those who are time-pressed, an excellent fish’n’chips and a Charolais burger are offered, along with cheese and charcuterie plates.

Previous Article A Trip to Belcastel, One of France’s Prettiest Villages, and its Star Hotel-Restaurant
Next Article E-1027: Gray’s Modernist Dream on the Côte d’Azur