A Trip to Belcastel, One of France’s Prettiest Villages, and its Star Hotel-Restaurant 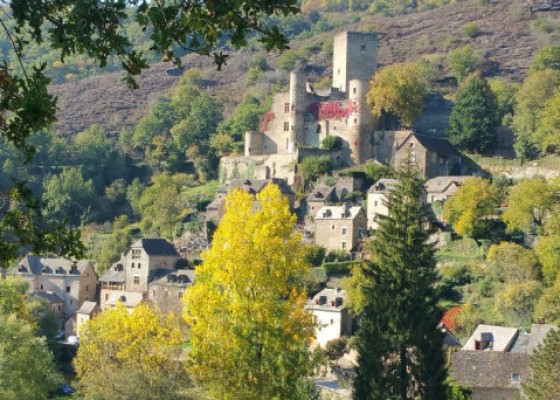 Do you have a special occasion to celebrate? Let me recommend the 3 starred Hotel Restaurant du Vieux Pont in Belcastel, one of the plus beaux villages de France, located in the Aveyron department. The drive in to the valley can seem misleading. The rugged road and overgrowth caused us to wonder if we had made a wrong turn. After what felt like a dozen kilometers, the château tower finally came into view, and the descent to the river was mesmerizing.

Simply put, Belcastel is an enchanted environment with lovely stone architecture. The hotel is small with only seven rooms, built on the far side of the riverbank overlooking the Aveyron River and a multitude of trees and foliage. All is gurgling water and birdsong from the bedroom windows. A short walk across the ancient arched cobblestone bridge leads back to the village and the Michelin starred restaurant. Dinner in the restaurant is a must. The simple but elegant dining room faces the river. Be prepared for a leisurely paced and complete meal with numerous gifts from the kitchen. We were welcomed with amuse-bouches, entrée, main plate, cheese cart, pre-dessert and dessert. It’s definitely an evening worth of incredible tastes and professional service.

Rising above this picturesque village on the crest of the cliff is Château Belcastel, discovered in ruin in 1973 and brought back to life by French architect and visionary, Fernand Pouillon. He painstakingly restored the château to its original condition and lived there until his death in 1986. This marvel is now open to the public from April through October and houses revolving art exhibitions curated by AFA Gallery in Soho, New York. A self-guided tour allows visitors to explore all the nooks, crannies, overviews and seating areas, as well as to take in the variety of artwork on display. Back at the hotel and on the banks of the Aveyron, don’t forget to indulge in petit déjeuner in the morning. If the weather permits, you will be served delicious fresh fruits and homemade delicacies at a riverside table well-laid out for you next to the rustling water. It’s all so scenic, you feel as if you’ve awakened as a princess or prince and are living in a fairytale. Jo Anne Marquardt is the author of "My Trip Around the Hexagon: Meandering in France" and "Falling in Love with France", both available at Amazon.com. Her first published book, Falling in Love with France, offers responses to the various questions friends and family have asked her over the years about why she visits France so often. The second book includes illustrations and descriptive notes from her travel journals. Visit Jo Anne's website to check out her art.