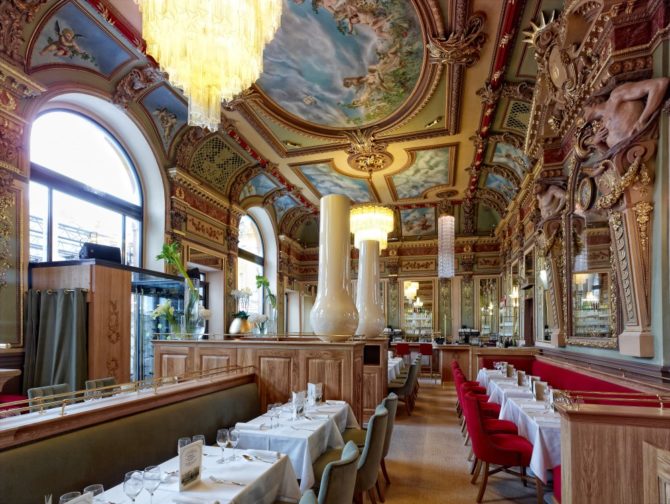 In a triumphant—and delicious—return to his southwestern roots, Paris-based chef Christian Constant, a native of Montauban, has done a magnificent job of restoring the opulent Belle Epoque interior of Le Bibent, one of the most famous restaurants in Toulouse. Located on the beautiful Place du Capitole, this 1874-vintage brasserie reigned for years as one of the most stylish tables in la ville rose, and also possibly its ultimate power table, where local politicians and industrial nabobs held court. Classified as a national monument in 1978, it’s a vast space with elaborate moldings, many mirrors, Murano light fixtures, several sturdy caryatids who know how to carry their weight, and gorgeous frescoes inspired by the original ones that unfortunately couldn’t be saved.

Le Bibent closed in 2009, was acquired by Constant in 2010, and after a year and €1.5 million of exacting work, it’s once again one of the most beautiful restaurants in France. Happily, the food’s excellent, too. Based on the lunch I had there recently, I wish that Constant would work the same magic on Paris’s sorry lot of mediocre and overpriced brasseries. Constant tapped Christophe Marque to run the kitchen, and together they created a terrific modern brasserie menu. My starter was a vividly fresh tartare of salmon, sea bass and oysters with smoked herring, followed by a juicy rib of Spanish pork cooked in a casserole, napped with a gently tart sauce of verjuice and cooking juices, and accompanied by a gratin of macaroni and a small mesclun salad. Wines served by the glass were well chosen, and the chocolate tart was an outstanding finish.

Originally published in the September 2011 issue of France Today; updated in August 2012

Previous Article Secret Maison
Next Article Jefferson Amid the Ruins