Time in a Bottle: Armagnac Reimagined 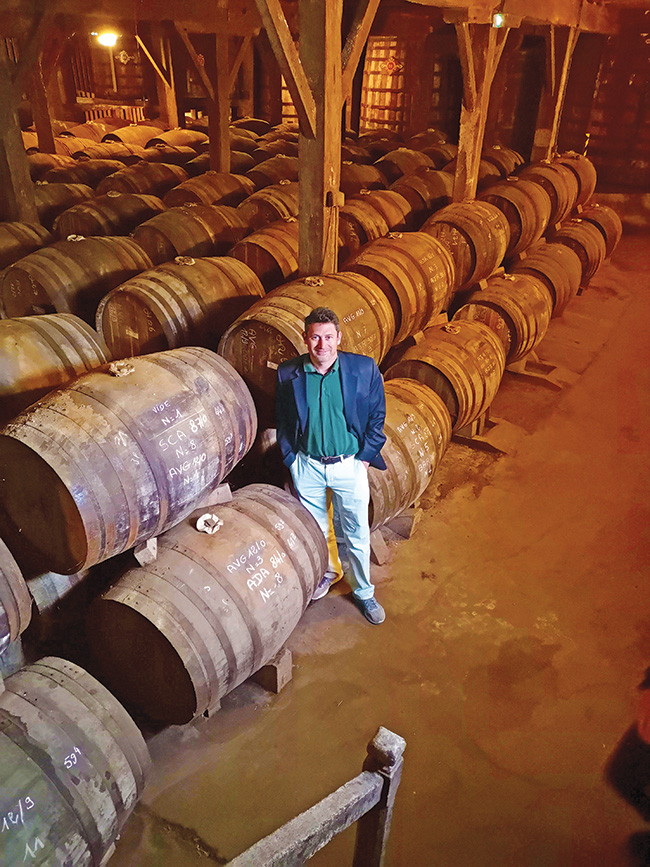 You can bottle a scent, but how on earth do you capture time in a bottle? With a love of history and a wealth of bygone knowledge under his belt, Raj Bhakta is a man who has been able to do just that since, in 2020, he acquired a 19th-century armagnac house in Condom in the heart of the Armagnac region. An American of Irish and Indian descent, Bhakta has been a life-long whisky lover who founded the successful WhistlePig rye whisky in the US. So, where did this love affair with armagnac come from? Well, Bhakta was already familiar with armagnac as he’d previously finished one of his whiskies in an armagnac barrel to great acclaim at the San Francisco World Spirits Competition.

After selling his company, Bhakta embarked on a worldwide quest to search out and acquire rare and exquisite spirits. His travels included forays to India and Scotland for whisky and the Caribbean for rum. While staying in the French Alps, he tells how his wife’s short fuse during her fourth pregnancy saw her shooing him from the chalet with a broom! Deciding it would perhaps be wise to make himself scarce for a while, he jumped into his car and headed for the peaceful pastures of rural Armagnac.

A long-time admirer of France, its emperor Napoleon and his nephew Napoleon III, Bhakta was in awe upon discovering the authenticity of the small-scale family producers and the sheer level of craft production in the region. He then struck gold when he met a family who were selling what was widely regarded as the finest and oldest collection in Armagnac.

“I’m getting into the brandy business for a very simple reason,” he says. “I know the spirits business very well. I know that I have found the world’s best supply of brandy that I think is the pinnacle of spirits. This is the essence of the American dream: find something old, beautiful, exquisite – priceless, really – then bring it to America and let it realise its full potential. Time is the one thing that money can’t buy. Where else in the world, with what other category or brand, are you going to be able to drink spirits that were distilled in 1870?”

Raj Bhakta with one of the armagnac producers © Bhakta Spirits

Not only had Bhakta found his holy grail of spirits in Armagnac, but by doing so, he was entranced by this land of lush landscapes and rolling hills in Gers that triggered parallels with his New England home in the green mountain state of Vermont. The 18th-century Château Cugnac in Condom, with its impressive cellars that safeguard a rich offering of rare armagnac vintages, has reawakened and thrums to a new beat under its dynamic new owner. The first fruit of Bhakta’s vision is the Bhakta 50, an ultra-premium armagnac blend where the youngest armagnac in the blend is an astounding 50 years old and the oldest 152 years. A blend of eight armagnac vintages from 1970 to 1868, this is truly time in a bottle.

“When I taste the 50-year-old spirit and I taste some 1868, I feel almost guilty that it’s wrong to drink something so rare and so old, but the truth of the matter is that if you get its spirit, it lives on and continues,” says Bhakta. “You’ve experienced it and you bring it to life now. It’s an opportunity to taste time itself.”

Bhakta finishes the blend in Islay whisky casks for the last two weeks of its ageing. This daring initiative epitomises this perceptive man who wants to introduce armagnac to the American whisky and bourbon drinkers (of whom there are many), who currently may not be aware of the joys of this French spirit.

Needless to say, this insight has rocked the humble world of armagnac and its producers, causing quite a stir with some enthusiastic advocates who can see how this newcomer can boost the armagnac cause with such considerable investment, while others shun what they see as his adulteration of their sacred and traditional eau-de-vie. But Bhakta counters: “New blood is always a positive driver, and I am breathing new life into the category that had become a little drowsy.”

Bottling in the cellar © Bhakta Spirits

Bhakta 50 encompasses a total of 38 distinctly different barrels, all with their individual alcohol degrees. Hand-bottled, each Art Deco-style bottle with a thick glass stopper inlaid with a golden bee (a nod to Napoleon) or the symbolic elephant’s head (a reference to his heritage maybe, but also the ‘strong and dignified’ image for the Republican party which would concur with his experience of crossing the Rio Grande on an elephant’s back making a point about border security), bear labels individually numbered by hand in beautiful gold script.

So how different is the Bhakta 50 from other old spirits? “The grape is a noble raw material, and nothing can take away from the elegance spirits than grain,” says Bhakta. “The terroir is incredibly important for the growth of the grapes in armagnac; 10 grape varieties are authorised, so there are many potential expressions. “All of my spirits have been aged much longer than your average ‘old’ whisky.” he says. “Prolonged ageing imparts flavour, but also carries great risk, especially in tumultuous times.

“Nearly every village in war-ravaged Europe has been ransacked time and again and after its fortifications are reduced, a captured town’s alcohol is the first thing to be consumed. Indeed, the oldest inhabitants of the Armagnac region still recall the sight of the German scout planes circling the countryside, searching for the tell-tale black discolouration – a by-product of alcohol storage that appears on the sides and roofs of the cellars of the villagers, who had hidden their brandy stocks. It is a miracle that these brandies survived.”

To ensure future generations can enjoy this armagnac, Bhakta has created an investment programme called the Stockholders Club. He wants to gather people together with shared values, common interests and with whom he can spend time. “It’s a way for me to get to know my customers, to learn from them and for them to know the man behind the bottle.”

Just recently, the Château welcomed key stockholders for an unforgettable visit to discover the annual Armagnac distillation during which they enjoyed the typically warm and generous Gascon hospitality and conviviality.

With such a busy schedule and appointment diary while in France, not to mention his attention to restoring the Château to its former glory, it is often difficult to leave the armagnac cellars. Nevertheless, Bhakta insists on taking time out to enjoy the rolling hills of his adopted Gers where he frequently hikes for hours on many of the ancient paths on the Way of Saint James, one of his favourites being the stretch between Condom and Larressingle. With the Château located in the centre of Condom, he counts himself fortunate to have the magnificent Gothic-style Saint-Pierre cathedral on his doorstep where he worships when he stays at the Château. And asked where he would live if he couldn’t live in his cherished homeland of America, he naturally says France. So how is his French? “My French is horrible but it’s not getting in the way of me trying to use it. Shamelessness is my principal ally; I learn a little bit more French every time I visit.”

Discover the three terroirs that make up this rural region:

Representing around 57% of armagnac vineyards, this area lies to the west of the region. Some of the soils here have pockets of iron elements, giving them a reddish-brown hue and the nickname “tawny sands”. Its main town is Eauze, with its rich architectural heritage; Nogaro and Cazaubon are also worth visiting.

Here, the soils consist of a mixture of clay and limestone. The area is presided over by Condom, from where armagnac would traditionally be exported along the River Baïse to Bordeaux. It’s also a key stop-off on the Way of Saint James pilgrimage route and famous for its connection with The Three Musketeers.

Primarily in the Gers département, the most easterly region boasts limestone and clay-limestone hills, and sparse vineyards. It’s also known as Armagnac Blanc due to the whiteness of its soil. Head to Auch and Marciac to experience the traditional Gascon way of life.