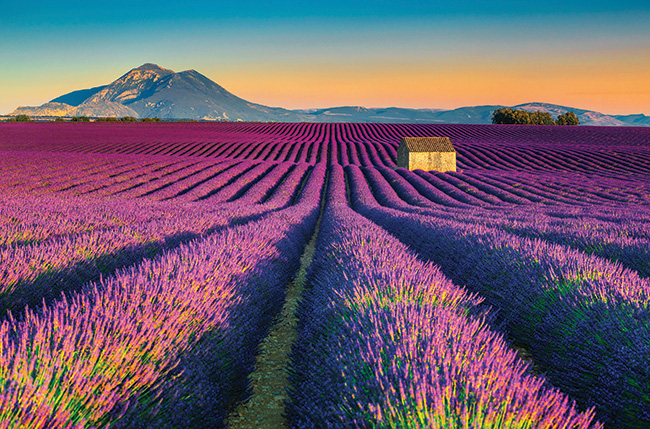 Discover our pick of the finest towns and villages along the Provençal lavender trail from hilltop villages to spa towns. Note: This article is part of a bigger magazine feature called “Purple Reign: Lavender and Provence”.

The lavender fields of Provence are renowned for their beauty as are the quaint villages and towns scattered throughout the hills and valleys of Provence. Many writers have taken inspiration from their stunning Provençal surroundings from Jean Giono to Peter Mayle. In fact, Albert Camus called the Luberon valley was his favourite place in the whole of France. Whether you’re looking to retreat from the world and be inspired by beautiful lavender fields, take a trip to a soothing spa, or taste some local olive oil, there’s plenty to enjoy.

One of the prettiest of the Luberon hilltop villages – called “the Mont Saint-Michel of Provence” – its well-preserved ramparts, 12th-century towers and hilltop church afford stunning views. The Forêt des Cèdres with its 150-year-old Atlas cedars is a splendid place for a walk and a picnic.

The postcard-perfect standout of the Luberon perched villages, Gordes, which once served as a medieval lookout and stronghold, is crowned by its 11th-century castle. Stroll through winding cobbled streets and pop into an art gallery or the charming Tuesday morning market.

In lavender season, Sault rises from its rocky perch like an island overlooking a patchwork of purple lavender and golden wheat fields with stunning views of Mont Ventoux in the distance. Discover the medieval ramparts and castle, Romanesque church and charming boutiques.

Called the Village of Painters, this picturesque town is perched at the edge of the Ferrassières plateau, overlooking rolling lavender fields and vineyards. Its pretty narrow streets harbour a 12th-century church and a romantic ruined château and artists’ workshops you are welcome to visit.

The honey-hued stone of this Romanesque village contrasts with the lavender fields that reach right up to its ancient fortifications. Reached by a winding cobbled street, its castle chronicles the town’s history, while the upper floors are home to the Sainte-Victoire Aromatherapy Laboratory.

Atop the Plateau de Valensole, this town’s picturesque squares, pastel buildings with painted shutters and wrought-iron balconies, and shops brimming with local delights embody the spirit of Provence. There are two listed gardens – the Clos de Villeneuve and the Château du Grand Jardin.

This Plus Beau Village, with pretty pastel townhouses and ochre tiled roofs, is set between two dramatic cliffs and the Sainte-Croix Lake, at the entrance to the magnificent Verdon Gorge. Its historic faïence pottery tradition is alive and well in its many shops and studios.

This charming town’s narrow streets harbour medieval ramparts and picturesque squares and fountains, along with a Templar castle and the 11th-century Notre-Dame des Ormeaux church. But its biggest draw is the thermal baths and mineral-rich waters for which it is named.

Head to this Plus Beau Village for rejuvenating treatments at the Valvital spa, with a pool and outdoor hot tubs overlooking the mountains. Wander through the ancient Porte du Beffroi to view the 13th-century belfry and visit the 14th-century church, complete with medieval frescoes.

Rising mirage-like in its snowy white stone, elegant Grignan boasts medieval houses and Renaissance doorways, a 16th-century church, 12th-century House of Justice and the Place de la Fountaine. Its château is famous for its connection with Madame de Sévigné, who wrote 45 of her letters here.

Nyons is known for its black olives © La Drôme Tourisme

Nyons’ Sunday market draws visitors from far and wide for its seasonal bounty: apricots and cherries, goat’s cheese, and honey… Stroll Nyons’ square, the pretty streets of the old town and its graceful 14th-century bridge and visit local artisans for olive oil, vinegar, and so much more.

This beautiful 14th-century Plus Beau Village is home to the Musée du Protestantisme Dauphinois, testament to France’s terrible wars of religion, set in one of only three Protestant temples to survive in France. The Centre d’Art Yvon Morin hosts world-class art exhibitions and music recitals.

For more places to see in lavender country, visit www.provenceguide.co.uk