Fortant: Making its Mark amongst the Wines of Languedoc-Roussillon 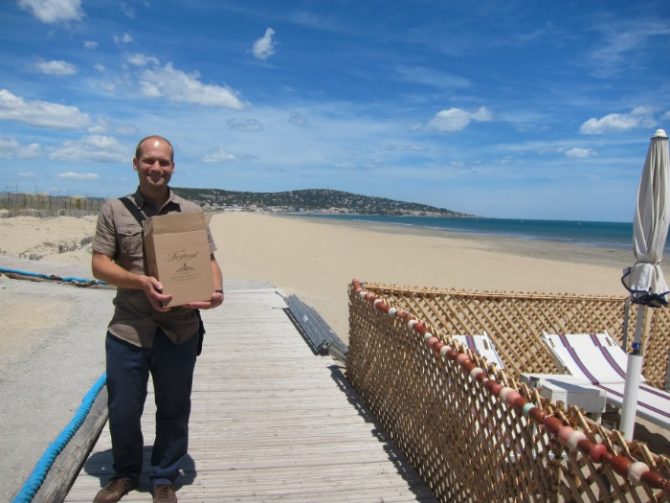 I saw the tiny port town of Sète in a bassinet of blue waters on the day I met up with my ambassador to Fortant, a wine estate, which recently changed hands to the Boisset family. After spending an afternoon at Jean-Charles Boisset’s California vineyard, where taste buds were not the only sense to be dazzled (red velvet fur, disco balls, and silver lab coats were reminiscent of a set from the movie Barbarella), I had to see this family’s latest acquisition in the south of France. Director of winemaking for Fortant, Laurant Sauvage, had planned out our day: wine tasting on the beach, vineyard explorations, and a visit to the winery where the magic happens. His name, Sauvage, said nothing of his style: his story about the brand intrigued me slowly and discreetly, as he pulled away one layer after another to reveal the legacy of Fortant wines.

To start, Sauvage took me to a panoramic vista, the perfect spot for an introduction to the beautiful port town swaddled in surrounding azure waters with the lagoon, Etang de Thau, on one side and the Med on the other. He spoiled me with visual introduction to the three different terroirs that grow Fortant grapes: coast, hills, and mountains. In this sunny setting, le mistral, or wind that comes from the sea, was blowing hard, we could barely keep balance. Here, Sauvage briefed me on the challenges at play for the new generation of quality wine makers in Languedoc-Roussillon.

The demand for quantity over quality is somewhat recent in wine history here, and the reputation of high-yield, low-grade wines from this region is not an easy one to shake off. I had heard that before, but to what extent I wasn’t sure. Sauvage showed me hard evidence: the remains of railroad tracks that led right into the wine warehouse so that trains could connect hoses to wine tanks, and directly pump it into the trains to expedite transport. Imagine.

Fortant’s original owner, the Skalli family, who founded the estate in the 1960s, got its wine start in Algeria. Upon arrival in Sète, Skalli largely imported Algerian wines, which was the first of a long line of improvements that would begin to elevate the reputation of wine coming from Languedoc.

Paying Homage to the Grape

Sauvage took me to Le Cabanon de la plage, the best seafood restaurant right on the sandy beach, for a chilled white and rosé wine tasting with beautiful whole grilled fish pulled in just this morning. My favorite in the line up was the Hills Reserve Voignier, bright with an apricot bouquet, and a bit of oak for good balance. He shared more insight as to why each varietal was planted in each of the three distinct terriors and how they came to distinguish wine by the grape, which is uncommon for the French.

In the 70s, when Robert Skalli took over for his father, he was met with the challenge to promote quality wines to a public reticent to buy the change. He needed to differentiate, extravagantly. He traveled to California’s Napa Valley where he learned the American way of distinguishing wines by varietal instead of solely by estate name. Fortant became the first of French wines to put the name of the grape on the label. The French wine market wasn’t quick to take this idea on, or as Sauvage put more succinctly, “they thought we were crazy.” But now the idea seems to be finally taking root. Skalli was never one to cater to the masses anyway; this innovator had such confidence in his knowledge of good terrior and the kinds of grapes that would grow in each distinct soil that it didn’t matter. He knew they’d catch on.

Change in Ownership, Not Philosophy

Later, Sauvage took me to the hills to see the vineyards where the sun beat down and the summer song of cicadas buzzed so loudly you couldn’t hear much else. As we wandered the vines, he showed me how to identify the different grape varietals,like how Grenache doesn’t have any hair-like fuzz on the backs of the leaves.

We talked about the future of Fortant, now owned by longtime family friend Boisset, who shares the same sort of experiential vibe that Skalli always had. While in transition, the Skalli family even temporarily housed the national theater seating hundreds of people in their new winery. To think!

Today the move from the old premises to the new is beginning to take form. Fortant is expanding with designs to take over the neighboring buildings to include the winery, a tasting lounge, and a welcome center on the Quai Riquet. The expansion won’t happen overnight, but the timing is right: the city of Sète has plans to develop a public promenade on the Quai Riquet, which currently has a more abandoned industrial vibe.  This project is slated to start next year.

Now with Boisset at the helm, slow and steady as always, Fortant will surely begin making waves.

Previous Article Jeanne Lanvin: The Great Lady of Haute Couture
Next Article The Hermione, the Replica of Lafayette’s Frigate, Returns to France