A Taste of the Divine: Monks and Nuns Making Wine in France 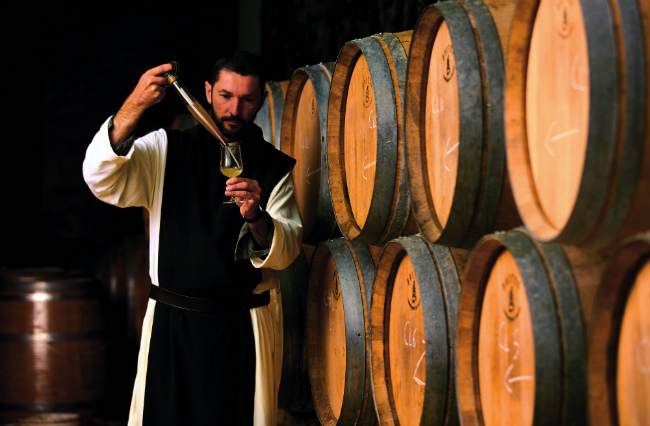 Though scientists debate whether it was the Etruscans or the Greeks who introduced wine and winemaking to France, there’s no doubt to whom we owe the beverage of today. Monks, and nuns, were key in both the preservation and advancement of viticulture, and although only a handful of French monasteries still make wine today, the historic influence of the French monastic orders is incalculable.

A study published in 2009 concluded that the Greeks, who arrived in the port of Massalia, now Marseille, in around 600 BC, were the bearers of wine to France – not the Romans, as was previously thought. The Greeks were cultivating grapes for winemaking as long ago as 4,000 BC, and some believe even longer. These avid traders and colonisers were largely responsible for the drink’s diffusion throughout the Mediterranean, since it seems that the Greeks introduced vines wherever they went. 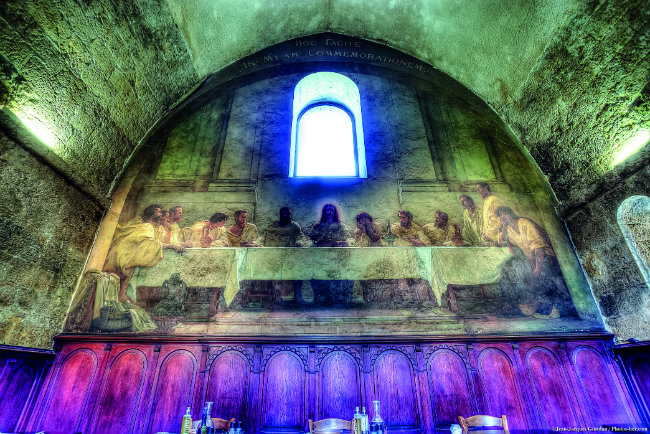 A fresco at the Abbaye de Lérins. © ABBAYE DE LÉRINS

But archaeological evidence found in 2013 at the site of ancient Lattara, a coastal port town in modern-day Montpellier, suggests otherwise. Chemical analysis confirmed that an Etruscan-style wine press and residues found in amphorae unearthed at the site date to about 500 BC, strongly suggesting that the Etruscans, an ancient Italian civilisation, introduced winemaking to the native Celts, and that the industry was probably already well established by the time the Greeks arrived.

Fast-forward to around the year 360 AD, when Martin of Tours, then a Roman soldier, tore his cloak in two to offer half to a freezing beggar. That same night, Christ appeared to Martin in a dream, wearing the torn cloak. The next morning Martin left the army and was baptised. He later became a hermit in Italy before eventually making his way back to central France. We don’t know how Saint Martin of Tours became a skilled viticulturist, but it’s likely he acquired the expertise during his time with the Roman legions, whose soldiers were also trained in winemaking. 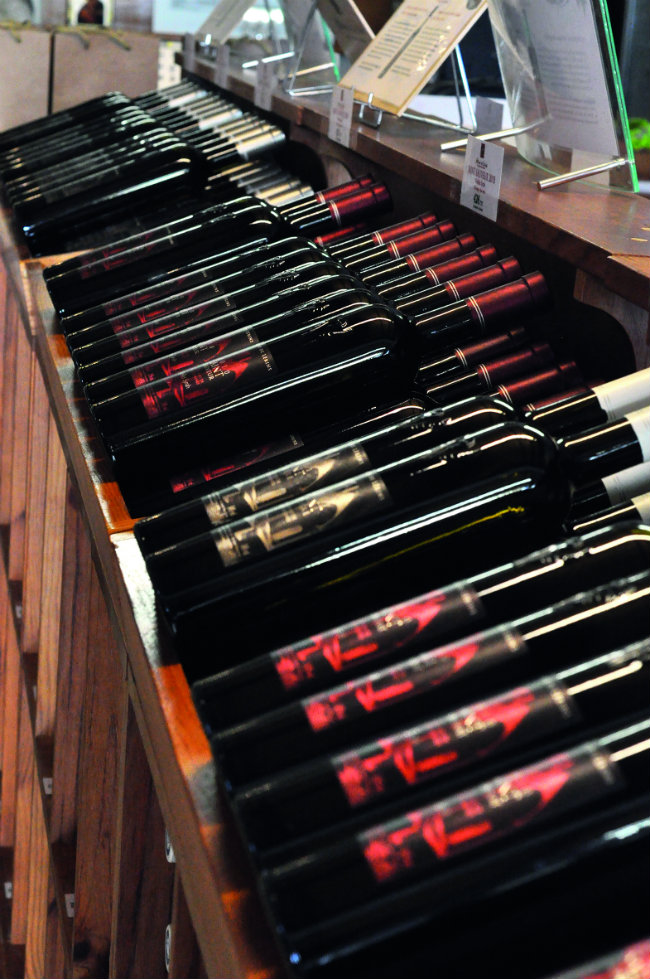 As the spiritual father of modern-day winemaking, Martin’s contribution is vast. Desmond Seward, in his book Monks and Wine, describes Saint Martin’s many viticultural feats, which include developing the Chenin Noir and Chenin Blanc grapes from the wild native grapes of the Touraine forest, and planting the very first Vouvray vineyards.

The practice of pruning was also inadvertently developed by the monk, whose donkey, left tethered in a vineyard, devoured every vine above knee level. But instead of ruining the harvest, the wine produced from the truncated vines was the best the monks had ever tasted. 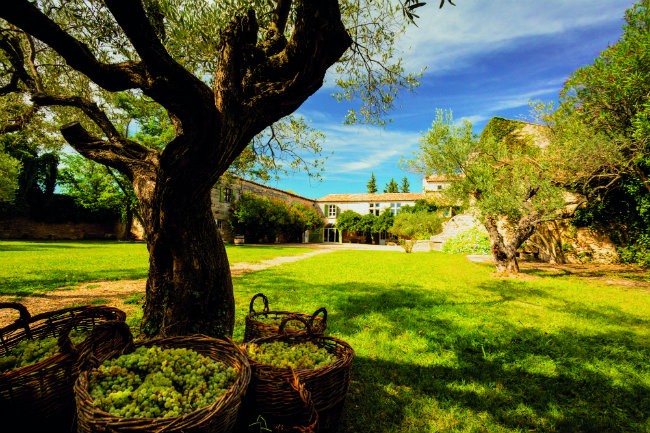 Besides founding France’s first monastery, which by the time of his death in 397 AD housed 2,000 monks, Saint Martin of Tours may have been the crucial conduit linking Roman winemaking know-how to the medieval monastic world, ensuring that the knowledge would last beyond the fall of the Western Roman Empire and through the Dark Ages.

Though introduced early on, monasticism only took root in France with the rise of the Benedictines, who assured its endurance in France, and, in parallel, the flourishing of winemaking. Saint Benedict’s “Rule” set out a humane model for monastic life revolving around prayer, study and agricultural labour, which included the tending of vines and winemaking. During the early Middle Ages’ waves of invasions, territorial wars and general chaos, monks were quite literally the preservers of civilisation, steadfastly providing charity, education and hospitals in return for labour and land. Their holdings often rivalled those of the nobility.

While wine was key in religious ceremonies, it was not cultivated strictly for liturgical purposes. In medieval times, wine was the only known disinfectant and, infused with tonic herbs, it held a reputation as a potent medicine. Much lower in alcohol than today’s wines, it was also suitable as a daily drink for the monks. And what they didn’t use could reap a decent profit, as wine quickly became the favourite drink of the nobility. 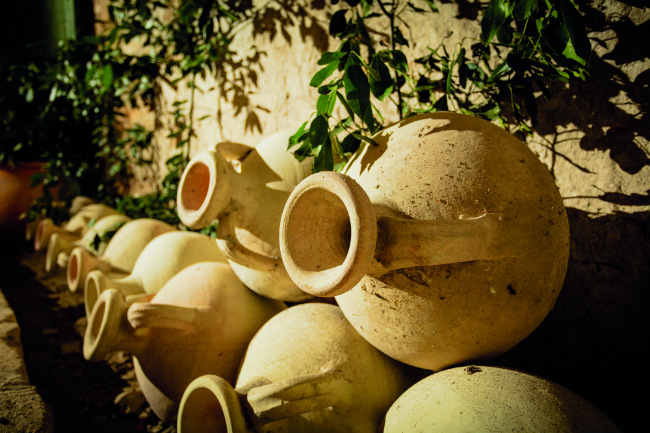 At the Mas des Tourelles, the winemaking methods replicate those that were used by the Romans. Photo: Aspheries

As monks acquired more lands and planted more vines, their vinification techniques evolved. From very early on, wines from different regions were recognised for their specific characteristics, and parcels within a single domaine were appreciated for the subtle differences expressed in the wine.

For 500 years the Benedictines dominated the wines of virtually every modern-day appellation in France: Champagne, Burgundy, the Loire, Bordeaux – even in and around Paris and as far south as Bandol on the Mediterranean coast.

By the 11th century, the Benedictines had grown wealthy from their land holdings, agriculture and the indulgences they took from rich aristocrats, and they used their money to add pomp, grand vestments and gorgeous churches to their inventory. In protest at the order’s move away from its original simplicity, a reform movement denouncing its increasing grandeur arose, creating a split between the Benedictines and the new Cistercian order. 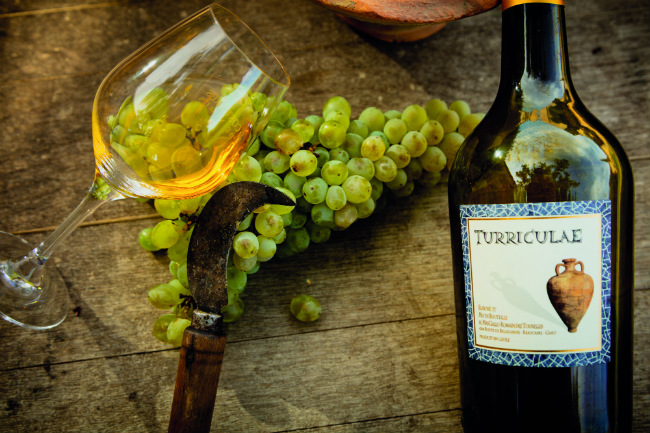 In their total rejection of the Benedictines’ laxity, the early Cistercians adopted a strict asceticism that embraced fasting, solitude and a punishing schedule of work and prayer. According to Seward, so gruelling was the lifestyle that a Cistercian’s life expectancy was just 28 years.

At the same time, the warrior orders – the Knights Templar and Knights Hospitallers (who later became the Knights of Malta) – were on the rise, and these orders also adopted the Benedictines’ model of cultivating the vine.

The upside of Cistercian discipline and emphasis on manual labour extended to the vineyards, and in a relatively short time the order surpassed the Benedictines as winemakers. In France, the Cistercians are credited as the developers of the glorious Chardonnays, still considered the greatest whites in the world.

Scores of France’s most notable appellations were developed by monks – Chablis, Chassagne-Montrachet, Vosne-Romanée, Pouilly-Fuissé, Châteauneuf-du-Pape, Pommard, to name but a few, as well as dozens of the great Bordeaux – and many still carry the names of the monasteries that thrived for centuries until the French Revolution.

By far the most famous is Champagne Dom Pérignon, named for the brilliant 17th-century Benedictine monk who did not, as some legends say, create the first sparkling Champagne, but most certainly developed the cork – the most
momentous innovation in the history of wine, as cork allowed wines to be aged in the bottle. 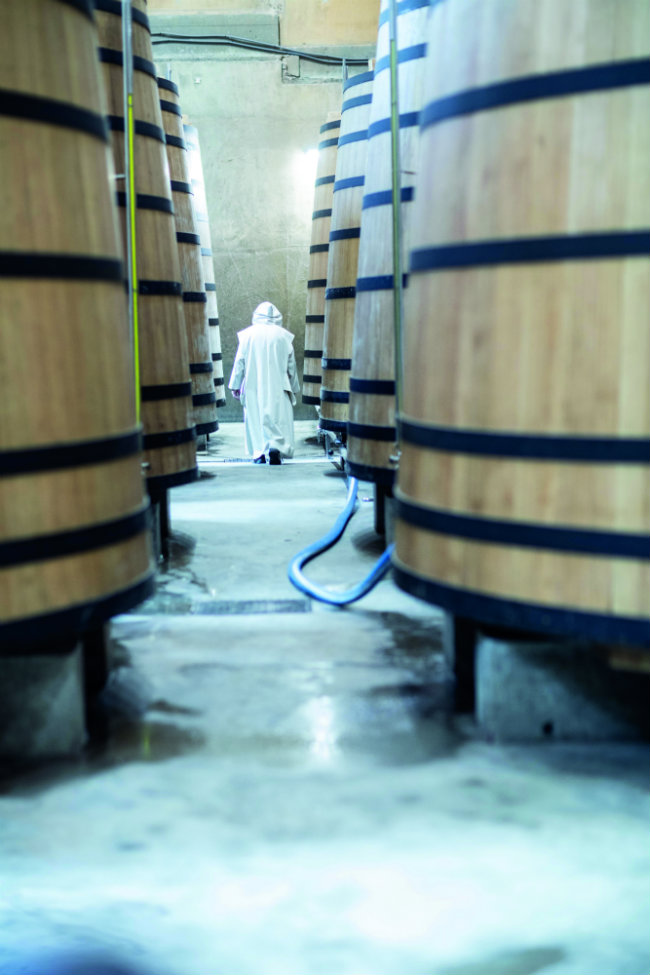 Chartreuse has been made since the 1700s. © CHARTREUSE

As monastics were perfecting their wine appellations, they were also experimenting with distillation. Mystery and magic still surrounded this process developed by Egyptian alchemists between the 4th and 8th centuries AD. Its association with alchemy – which was tantamount to witchcraft in the late Middle Ages – may be what kept distillation, then used solely as a means to make medicines, from becoming more widespread in the making of beverages in Europe until the 1600s. Even then, the spirits produced – called aqua vitae, water of life – were used mostly as medications, the alcohol content being dangerously high. 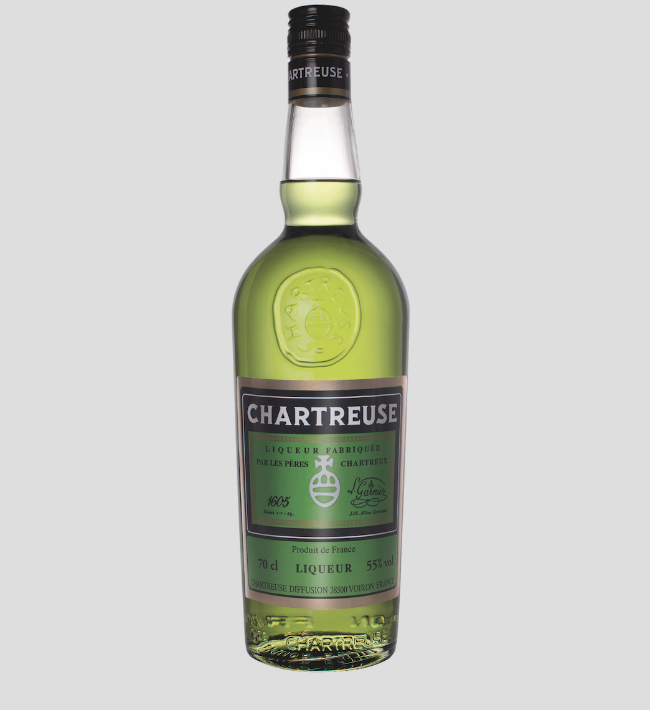 Around 1600, a much-guarded manuscript containing a secret recipe for an elixir of life was offered to the Carthusian brothers of Vauvert in Paris, specialists in botany and the use of medicinal plants. Try as they might, they could not replicate the drink and the recipe was locked away and forgotten for the next 125 years. Then, in the early 1700s, the brothers rediscovered the recipe and gave it to their counterparts in the Chartreuse mountains, where alpine herbs were plentiful. The brothers spent the next 26 years experimenting with the drink until they finally succeeded in creating the 142-proof Elixir Végétal de la Grande-Chartreuse. Today, the famous liqueur has been tamed to a gentle 110 proof, and the yellow version, created in 1842, a mild 86 proof.

Even now, the liqueur is a strictly guarded secret known to only three brothers at a time. Chartreuse is still made from the original base of 130 herbs and assembled by the monks in a secret herb room at the heart of the monastery.

There are only four monasteries in France making wine today, and one making spirits. The only wine that aspires to international status, and that you’ll find outside monastery stores, comes from the Île Saint-Honorat, one of the two jewel-like Îles de Lérins, a 15-minute ferry ride from Cannes.

The 20 monks of the Abbaye de Lérins Cistercian brotherhood may shun the spotlight, but their highly prized organic wines and beautiful 20-acre vineyard are a big draw. To sample these nectars, the Lérina boutique, a few steps from the port landing, offers tastings of the monks’ seven vintages, including Saint Salonius, made from 100% Pinot Noir (€95), often served to the jury of the Cannes Film Festival, and a staple on Paris state dinner menus. The monks also make several liqueurs from top-secret recipes, including the aromatic Lérina, made with 44 herbs and seeds, and sunny Lérincello, which is made from the famous lemons of Menton. 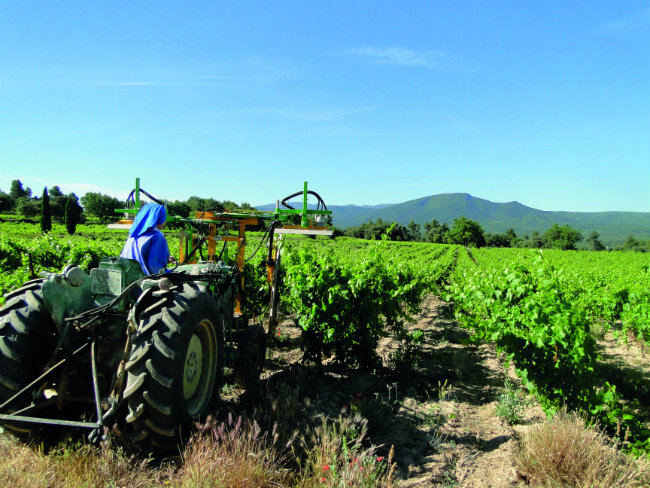 The last winemaking nuns in France welcome visitors to their graceful, sun-drenched abbey, Notre-Dame de Fidélité, in the small Provençal village of Jouques, about 16 miles from Aix-en-Provence. When the 15 sisters of this Benedictine order arrived from Paris in 1967 to found a nunnery, they decided to cultivate the property’s ten acres of fallow vineyards. A few years later, with help from village winemakers, the nuns produced their first wines, and in 2016 were granted the protected designation of ‘Origine Coteaux d’Aix’ in recognition of the quality of their terroir.

Today, the 40 sisters, aged between 27 and 82, residing at Notre-Dame de Fidélité, also produce jams and honey, almonds, olive oil, essential oils and soaps from their own gardens, hives, olive groves and lavender fields, all found in monastery stores throughout France and in their online boutique. Their simple, wholesome way of life, their wines and the foods they prepare from the bounty of their own gardens are commemorated in an illustrated recipe book titled Invitation à l’Abbaye. 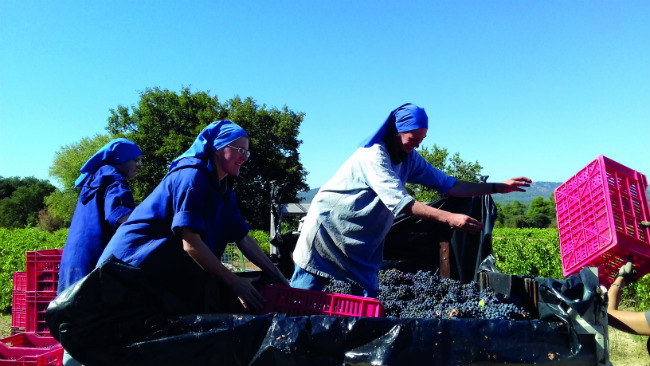 And if you’re wondering how a 1st-century wine might have tasted, head to Mas des Tourelles in the heart of Roman Provence. The pedigreed vineyard – it’s been in the Durand family since 1762 – is the site of a unique “experimental” archaeological project in partnership with France’s prestigious CNRS (Centre National de la Recherche Scientifique). After the remains of a Gallo-Roman wine estate – complete with kilns, amphorae and other tell-tale signs – were discovered on the property, an original project was born: to reconstruct a Roman vineyard, wine cellar and press in order to produce wines that were as faithful to their ancient antecedents as possible. The project aims to recreate not only the environment and working conditions but even the taste of the wine. Three wines replicate recipes passed down through the works of Pliny the Elder, Lucius Columella and Palladius, with ingredients like sea water, fenugreek and rhizome of iris added to them.