The Île Saint-Honorat: The French Riviera’s Isle of Sacred Vines 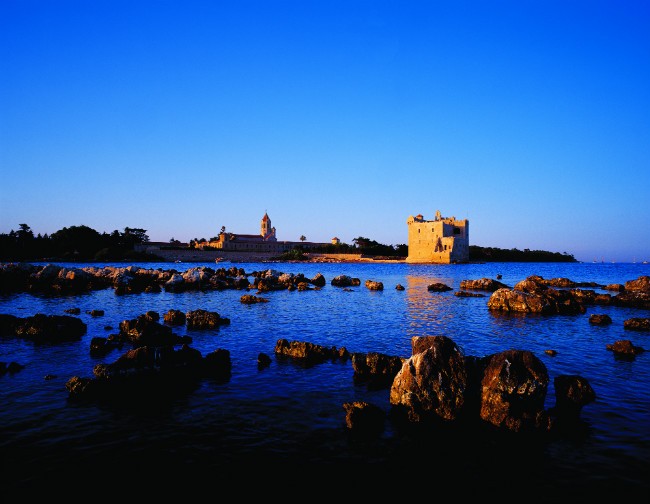 Due to France’s fierce political secularism, and the headlines that it generates, the country’s Catholicism can be easily overlooked. Yet up to 88 per cent of l’Hexagone’s population still identifies itself as Roman Catholic and some devout pockets remain. One such enclave is to be found on the Île Saint-Honorat. One of the four Îles de Lérins on the Mediterranean, the Île Saint-Honorat is just a 15-minute boat ride from glamorous Cannes.

In this city giddy with wealth, oversized yachts jostle to moor as close as they can get to La Croisette – a boulevard that’s famous for haute couture, celebrity sightings and its legendary red carpet, which leads ever-beautiful attendees of the Festival de Cannes to the Palais des Festivals each May. Cannes’ waterfront drips with its affluence as dizzyingly as its image-conscious holidaymakers shimmer with designer bling.

In the midst of such hedonism, no one would expect to discover a pious order of Cistercian monks living frugally, just six kilometres offshore, at the Abbaye de Lérins on the Île Saint-Honorat. There’s been a monastery the island since the fifth century, when Saint Honoratus first built a secluded abbey there. His followers settled there to follow a pious path, one without distraction or interruption, and still do. Taking the vow to live as a monk at the Abbaye de Lérins commits you to never leaving the island’s shores again – to live, die and be buried among the vineyards which occupy the majority of the island’s soil.

For this is the Île Saint-Honorat’s secret. Benedictine monks follow a strict lifestyle centred on prayer and work, and on the island le travail is to make wine. Should you catch the boat over to taste the monks’ wares, you’ll likely end up joining them in worship, in thanks for the gift of devotedly crafted wine that’s divine enough to have descended from heaven itself.

Saint-Honorat is the second largest of the Lérins islands, and when visiting by boat is initially obscured by its larger neighbour, the Île Sainte-Marguerite, which is famed for far less reverent reasons. The latter’s Fort Royal prison boasted several infamous inmates between the late 17th century and its closure in the 20th century, including the notorious ‘Man in the Iron Mask’. Today, it’s a low-profile sunbathing spot for stylish holidaymakers who moor their boats in the ‘Plateau du Milieu’, the shallows which separate Sainte-Marguerite from its neighbours.

Though only 1.5km long and 4km wide, the Île Saint-Honorat not only boasts volumes of history and culture, but is also a haven of natural beauty and birdlife. Bathed in sunshine for some 300 days each year, the island’s main vegetation consists of wiry Aleppo pines and around 290 gnarled olive trees, which are harvested for a small production of oil that totals just 500 litres per annum.

Sandy paths traverse the island’s eight hectares of vines, which are protected from the sea’s influence by a dense pine-tree fringe. The air is perfumed by a variety of jasmine plants, its scent mingling with the salty breeze. Bizarrely, a large colony of pheasants shares Saint-Honorat with the monks – and their weakness for Chardonnay grapes is a growing problem. Each year, these faisans eat between two and three per cent of the vineyards’ total grape harvest, a habit which has prompted the island’s residents to arrange for many of them to be captured and re-homed on the mainland, for the sake of their precious vines.

The cluster of stone buildings to the south of Saint-Honorat consists of the main Abbaye de Lérins, seven ancient chapels, an abbatial church and a fortified monastery which dates back to the 11th century. The latter isn’t in use today, and its upstairs chapel is exquisitely austere – just worn wooden benches facing a faded crucifix fresco and sand which sweeps across the floor from the exposed windows. From its crenellated roof, the vista is spectacular, stretching along the entire Esterel coastline to the cape of Antibes. Facing back towards Cannes, a fantastic view of the Abbey is set against the snow-capped Alpine range, visible on clear days.

According to legend, the island wasn’t always so hospitable. When Saint Honoratus first arrived, it was allegedly made up of a dense forest filled with vicious snakes and spiders. But not long after the completion of Honoratus’s fortified monastery, a tidal wave of biblical proportions hit the island, washing it of every immoral creature. The monks were safe in their stone tower, and were left with the blessed land that we see today.

Ten of the 18 monks who live on Saint-Honorat today are involved in producing six vintages, equally divided between white and red, totalling 40,000 bottles per year. It’s a large production for such a small vineyard, whose focus nevertheless remains on quality over quantity, carefully preserving the mineral-rich flavour which stems from the local terroir.

Saint-Honorat’s has a unique terroir, which derives from high levels of soft water soaked into the ground; limestone beneath the soil; iron in the soil itself, from the island’s volcanic origins; and of course the Côte d’Azur’s high level of sunshine. The sea breezes deposit traces of salt upon the grapes, which organically prevents them from being attacked by insects, and also adds a mineralised hint to the wine.

Among the most prized vintages is the ‘Saint Pierre’ – a unique blend of 70 per cent Chardonnay and 30 per cent Clairette grapes. Pale yellow in colour, the 2012 vintage that I tasted is lightly perfumed with white fruit, and boasts apple and honey notes balanced by a good acidity. This particular white, which is served to the jury of the Festival de Cannes, pairs best with light Mediterranean dishes and salads, though partakers should beware of its high alcohol content of 14.5 per cent.

As for vins rouges, Saint-Honorat’s Syrah is a dark, spicy wine of dense minerality with a long finish. The grapes used to make it are so intense in flavour that their maceration period is limited to seven days, rather than the usual time frame of three weeks to a month. This is a structured, powerful wine, one that’s aromatic with red fruits and balanced by notes of leather and black pepper.

You may be moved to ask, do the monks actually drink these wines? Well, the official line is that they don’t but, of course, I’m told – with a wink – that they’re required to taste them, just to make sure the quality is up to scratch.

In addition to wines, seven liqueurs are distilled on Saint-Honorat, including Lérincello that’s made using lemons from Menton, traditional Provençal Verveine, and Lérina Verte, which has been produced on the island since the late 19th century and comprises of 44 local herbs and plants.

On the northern tip of the Île Saint-Honorat, just where the ferry docks, you’ll find the exceptional La Tonnelle restaurant. The incredibly fresh Mediterranean menu there is more down-to-earth, creative and reasonably priced than you’ll likely find anywhere in Cannes. Seasonal dishes are a priority and encompass grilled fish, seafood and salads, which are often lifted by fresh Provençal citrus fruits and herbs. And bien sûr this delicious menu is complemented by the monks’ own wines and liqueurs.

The day I visited, the entrée consisted of wedges of impossibly creamy mozzarella melting onto sweet slices of beef tomato and fresh-baked focaccia. This was followed by a silkily soft, rare tuna steak with tangy ratatouille and chickpea chips. La Tonnelle is incredibly gourmet, considering that it shares soil with a Cistercian monastery, but is unfussy too, its chefs allowing the natural vibrancy of the local produce to shine.

From the wooden seats of La Tonnelle’s terrasse, which sink into the soft sand, I enjoyed an incredible panoramic view of the Baie de Cannes and the crystal-clear waters lapping at the nearby pier – it’s among the Côte d’Azur’s most idyllic dining spots. The restaurant has even teamed up with the Cannes-Saint Honorat ferry, offering a panini-and-boat-ticket for €19.90.

Visitors are often attracted to the Île Saint-Honorat for its religious significance and the depth of peace which can be drawn from its humble community. But enjoying the monks’ wines can be spiritual, too – nowadays it’s not easy to find produce with such an organic, sacred link to the land. Whether your motivations are rooted foremost in faith or of a gastronomic persuasion, a moment of inner satisfaction and harmony can be found on this island of earthly and spiritual delights.

Ferries depart from the Port de Cannes to saint-Honorat every hour between 8am and 5.30pm, and the last boast back is at 6pm. Return tickets cost €16.50 (€7.50 for children).

For more information on the abbaye de lérins, visit www.abbayedelerins.com