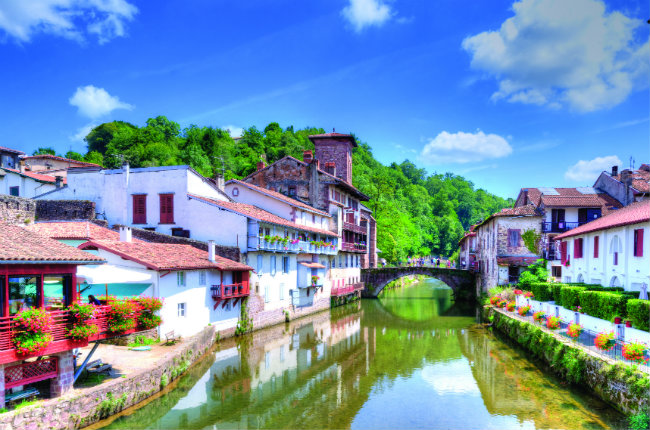 Europe’s best surfing, the chic coastal town of Biarritz, the proud Basque culture and language, the rolling foothills of the Pyrenees, even a ski resort… the French Pays Basque is one of France’s most varied and distinct regions.

You’ve almost left France by the time you reach the Pays Basque. Lodged down in the south-western tip of the country, it’s the last Gallic outpost before you cross the border into Spain. It may be small – just 1,100 square miles and well under half of the Pyrénées-Atlantiques department it occupies – but thanks to its highly individual culture, lifestyle, cuisine and its fiercely proud people, it punches well above its weight class.

It’s forced to, really. Otherwise it risks being dwarfed by its larger Basque neighbour across the frontier to the south. This explains why the French Basque Country is such an enriching region to visit. They do nothing by halves. 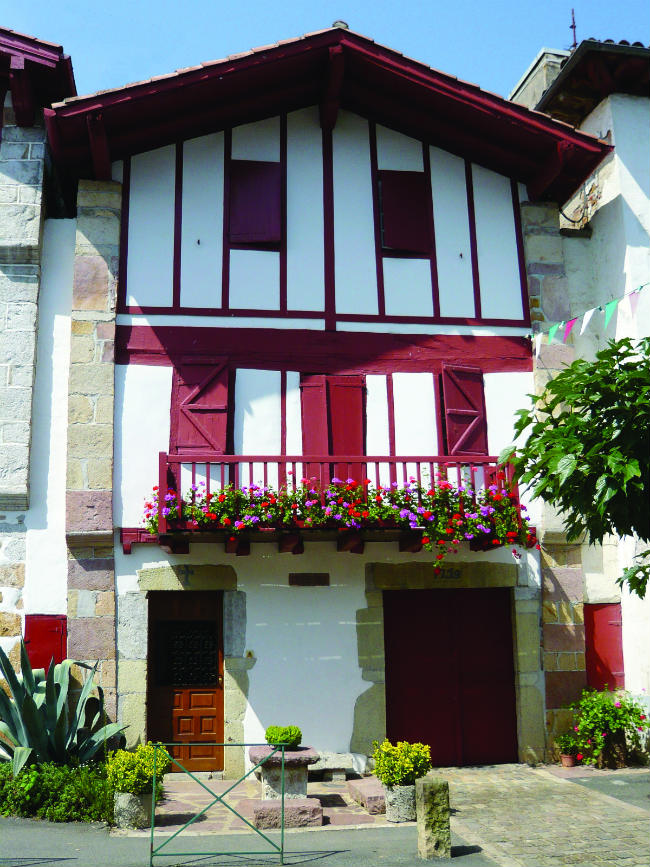 Let’s start with the geography. The Pays Basque Français (as it’s known in French) or Iparralde (‘the north side’ in Basque) is split into three provinces: Labourd, Basse-Navarre and Soule. In truth, few tourists stray from Labourd, the westernmost province with its beautiful coastline stretching along the Bay of Biscay from Anglet down to Hendaye. Here you’ll find vast sand dunes, fishing villages-turned-tourist traps, the trés chic coastal city of Biarritz (more of that later) and some of the best surfing in Europe.

The area is dominated by the triple conurbation of Biarritz, Anglet and Bayonne (known as BAB). The three towns may butt up against one another but they are distinctly different in their characters. Starting in the north, there’s the sprawling and ever-so-cool surf town of Anglet (you pronounce the final ‘T’) where hipsters and hippies live out the surfing dream. 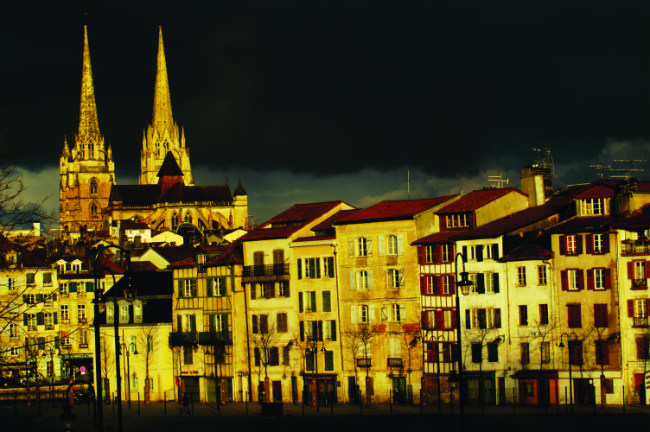 From here you head a few kilometres inland to Bayonne, Pays Basque’s most important city, although the Biarrots, as Biarritz residents like to call themselves, will fight you for saying so. Here you’ll witness all sorts of displays of Basque culture ranging from Bayonne ham and Espelette chilli (piment d’Espelette) to separatist political graffiti and the many forms of the ball game Basque pelota. Talking of sport, any visitor must take up the chance to spectate at a boozy, raucous rugby match at Bayonne’s top club Aviron Bayonnais, currently the strongest in the region. Biarritz has a decent team, too: Biarritz Olympique Pays Basque. Underestimate the fierce rivalry between the two supporting camps at your peril. Even if you dislike the oval-balled game, it’s worth attending a match just for the atmosphere.

Bayonne loves to party, and not just for the rugby. By far the biggest party of all takes place at the height of summer during the Fêtes de Bayonne. This is when you can let yourself get bowled over (literally, if you’re not careful) by the annual five-day festival. The town battens down its hatches as close to a million visitors, all dressed in white clothing with red neckerchiefs and belts, descend upon the town to party hard. Featuring a running of the bulls (like in Pamplona, only on a smaller scale, and with female cows whose horns have been wrapped in rags to prevent goring), it’s one of the biggest festivals in Europe, and a time when all members of the French Basque diaspora – whichever far corner of the globe they’ve been flung to – do their utmost to attend. Once the sun goes down, and the alcohol increases its flow, the party gets raucous. The 2017 festivals runs from 26 to 30 July.

The beautiful port area of Biarritz, queen of the Basque coast. Photo: Fotolia

Just a few kilometres from Bayonne, back on the coast, is Biarritz. Culturally, it’s a million miles from its rival neighbour, with five-star hotels, a casino, spas, jewellery and fashion shops, and bars where you might look out of place if your pullover isn’t slung BCBG-style (that’s French for preppie) around your shoulders. There are several surfing beaches here, with many more further along the coast both north and south. Biarritz is one of those rare surfing spots where you can exit the waves and, within minutes, be in the heart of the city. At lunchtimes it’s not uncommon to see office workers swapping business suits for wetsuits, and nipping down to the shore, surfboards tucked under their arms, for some prandial posing. In autumn, when conditions are just right, an immense wave called the Belharra can form, sometimes reaching as much as 15 metres in height. Only the most intrepid and experienced attempt to ride it; the wave is so big the surfers need jet skis to drag them into position. 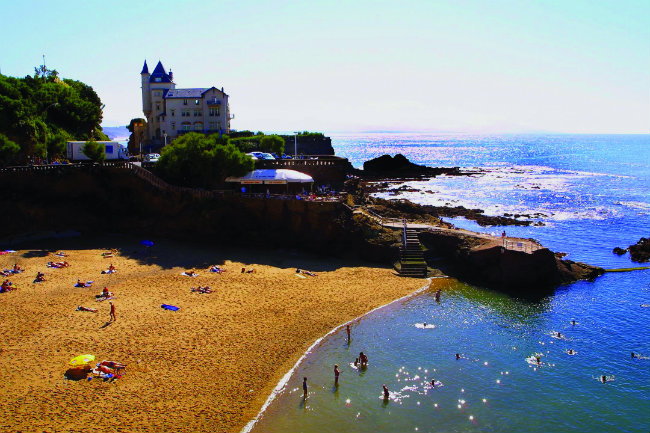 24km south of Biarritz is Saint-Jean-de-Luz, an old fishing and whaling village that has grown into a thriving holiday resort, now thronging with tourists during the summer months. A long promenade stretches in a vast semi-circle along the edge of the bay, linking the high promontory of Pointe de Sainte-Barbe in the north to Ciboure (Saint-Jean-de-Luz’s shyer little brother) in the south. The main town is still an active fishing port, as evidenced by the excellent fish stalls and restaurants you’ll find dotted throughout.

Even if you’re not into churches, it’s well worth having a quick peek at the beautiful Église Saint-Jean-Baptiste, with its multiple tiered oak galleries and huge, detailed retable behind the altar. The church still dines out on the fact that Louis XIV married his Spanish wife Marie-Thérèse here in 1660. The church door used by the king was sealed after he had passed through so no one else could follow in his footsteps. On Rue Gambetta you can still see its outline to this day. 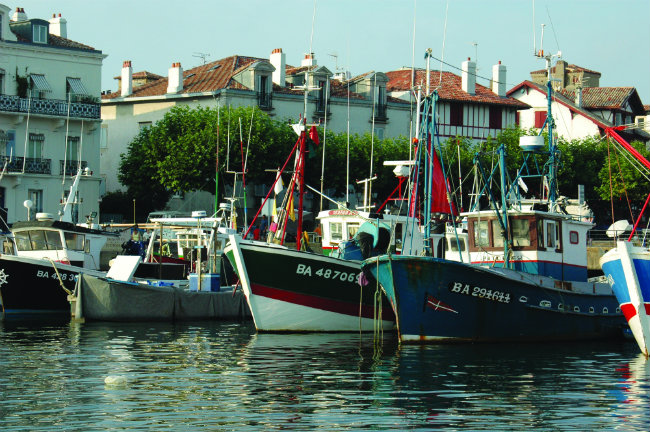 Now for the interior of the Pays Basque. Without any large towns to speak of, this is the area most neglected by tourists, unless you’re planning to explore the foothills or steeper slopes of the Pyrenees. Saint-Jean-Pied-de-Port, the centuries-old pit stop for pilgrims in transit along the route of Santiago de Compostela, is a good entry point. From here you can fan out across the hills, the valleys and the slopes of the Pyrenees that comprise the rest of the Pays Basque. It’s an underpopulated, rugged, at times quite wild region, where you’ll find lush green countryside, deep gorges, white-water rivers, high mountain paths once used by contraband smugglers, and shepherds tending their flocks. 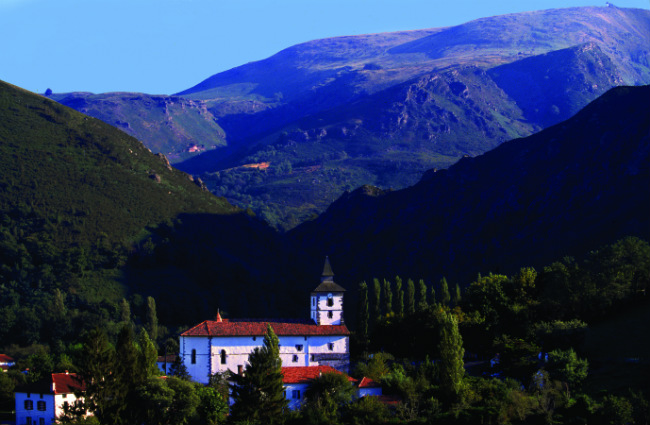 The town of Itxassou is famous for its June cherry festival. Photo: CDT64

Experience a whole host of mountain sports from hiking and mountain biking to canyoning and white-water rafting. Many intrepid hikers take on the Pays Basque section of the GR10, a long-distance footpath that starts in Hendaye and follows the spine of the Pyrenees 885km all the way across to the Mediterranean. If that sounds a bit too challenging, you can always wander more sedately through some of the more remote villages.

Here you’re more likely to hear locals speaking Basque than French. After centuries of decline, the Basque language is making something of a comeback in this part of France. There are bilingual schools, books, magazines, radio stations and, broadcast from over the frontier, TV channels. It doesn’t have the same political clout as it does on the Spanish side (where it enjoys official status) but it’s flexing its muscles all the same. 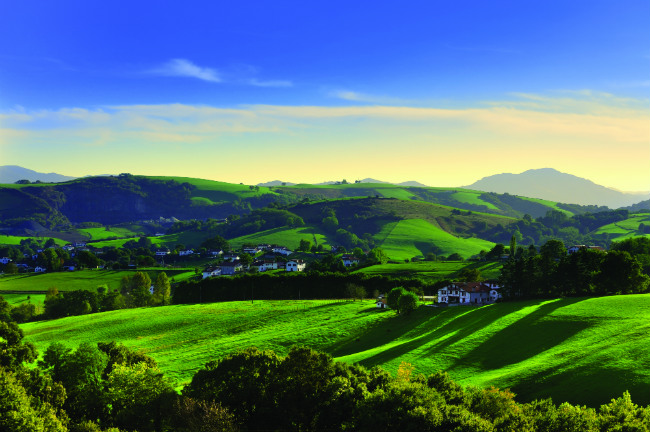 The rolling hills of the French Basque Country. Photo: Fotolia

Currently there are just 50,000 or so fluent speakers of Euskara (the Basque name for the lingo) in the French Pays Basque. Numbers had been dwindling since the Revolution did its utmost to federalise the population in as many ways as possible. At one time, schoolchildren who dared speak their native tongue in the classroom were even punished with beatings. Nowadays, though, thanks to a new generation of bilingual schools, young Basque kids are rediscovering their endangered language.

For your average Francophone, that’s no easy task. Using lots of Ks, Zs and Xs, it sounds more like a Central Asian tongue than something you’d hear on the Atlantic coast. Some scholars have even suggested links to Chechen or Georgian. In fact it’s the only language in Western Europe which isn’t classified as Indo-European. While theories abound as to its origins, none have been proven. It really is an anomaly; all on its own; totally individual. 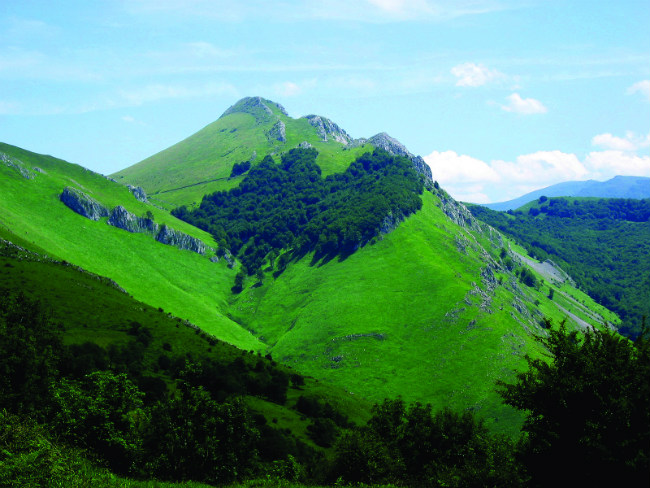 The hillside above the commune of Béhorléguy in Lower Navarre. Photo: CDT64

A bit like the tiny region of France across which it echoes. Where else in this great country can you find tough rugby players rubbing shoulders with surfers, Biarritz bourgeoisie, mountain shepherds and political separatists? (Yes, even north of the Spanish border, Basque nationalism is alive and kicking. In decades past there were even minor sporadic acts of terrorism. But it’s all peaceful now.)

If there’s one place that unites both the French and the Spanish Basque people, it must be La Rhune. This mountain, on the far western edge of the Pyrenees, not far from the village of Sare, straddles the border between the two countries, and holds a sacred place in Basque mythology. Up until the 18th century, local villages hired a monk to live up on the summit, guarding the region from evil witches. 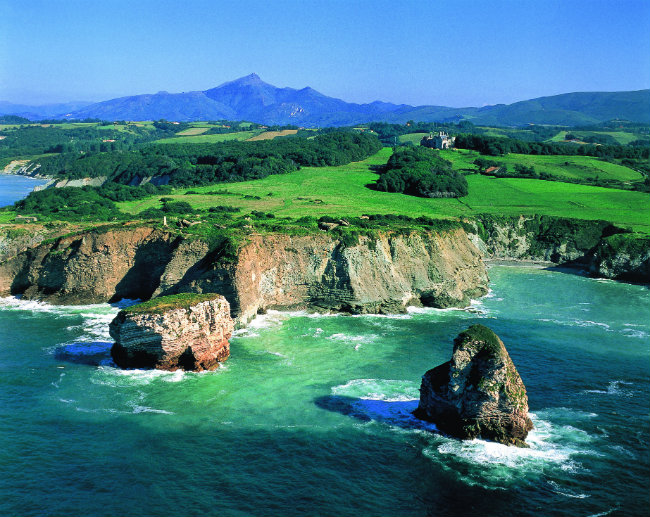 Nowadays the summit is just inside French territory. You can climb up – and, in summer, plenty of fit hikers do since it’s only 905 metres to the top. But most visitors hitch a ride on Le Petit Train de la Rhune, which runs from March to November. This vintage rack railway winds its way to the peak from where, on a clear day, you can see west across the Bay of Biscay, east along the backbone of the Pyrenees, north to the Landes and south into Spain. What better location to contemplate the entirety of the Pays Basque? 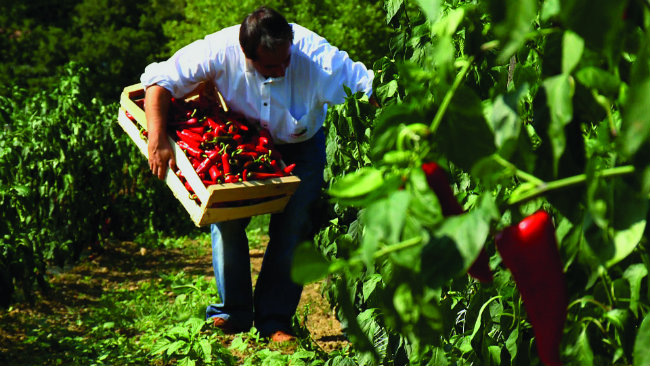 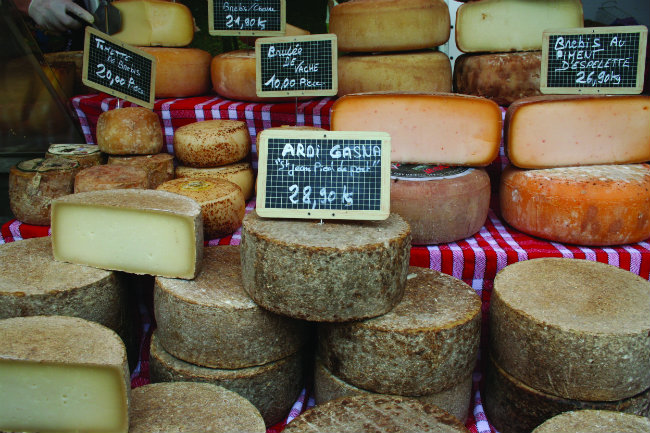 The Food of Pays Basque

It normally starts with the ham. The Bayonne ham, to be precise – a sweet variety of specially cured ham that is protected by something called Indication Géographique Protégée (a bit like fine wine’s AOP).

To qualify for the appellation, the ham must originate from certain breeds of pig. The rearing, slaughtering and drying processes are all strictly regulated, resulting in a delicious meat that is sliced very fine and normally served as a starter. A great accompaniment to it is the sheep’s cheese known as ardi gasna which is eaten with jam or jelly. 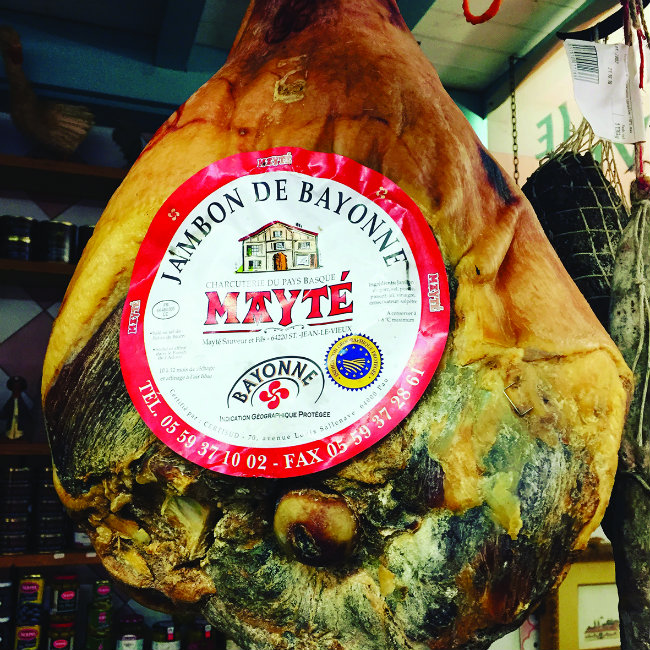 With so much coastline, the Pays Basque is great for fresh fish, with many restaurants offering tuna, hake, sardines, calamari and dorado, all freshly hauled in from the Bay of Biscay. Many Pays Basque dishes, including the fish, are flavoured with one of the region’s key spices known as piment d’Espelette, a chilli grown up in the hills and hung with pride on the front façades, of the farmers’ houses. It is both hot and sweet at the same time. 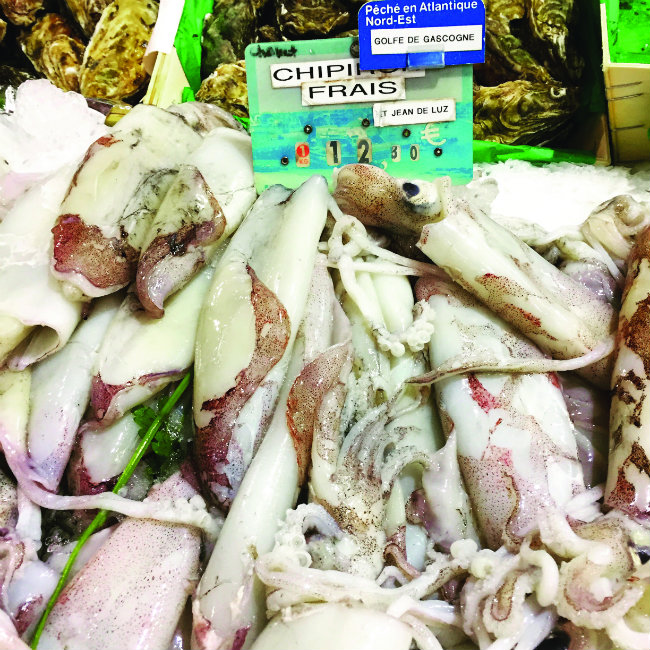 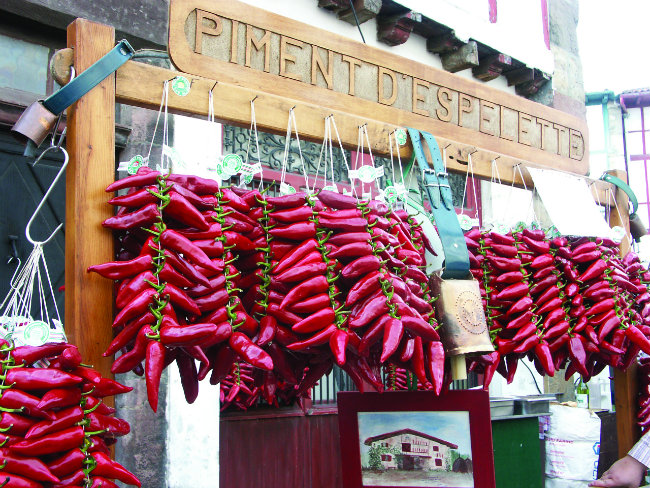 For dessert, there’s the famous Bayonne chocolate (originally brought to the region by Spanish and Portuguese Jews fleeing the Inquisition), and the Gâteau Basque. Inevitably every village, and every patissier within every village, insists their Gâteau Basque is the best ever.

Other Basque specialities include lamb, Banka trout, Itxassou cherries and macaroons. The local cider is known as sagardotegi. There is a small wine region centred around the vineyards of Irouléguy. 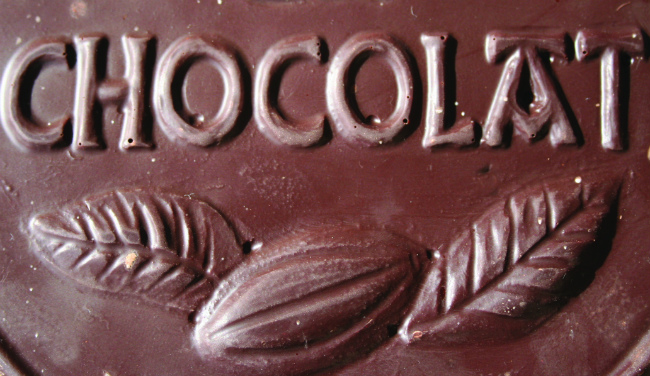 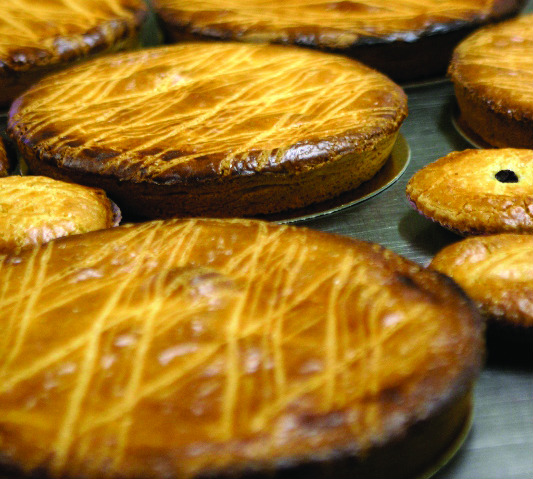 Previous Article From the 1906 Fire to the Internet, French Libraries in San Francisco Reinvent Themselves
Next Article Francophile Favourites: An Interview with Writer Patricia Fieldsteel