Back to School on the Riviera: Institut de Français in Villefranche-sur-Mer 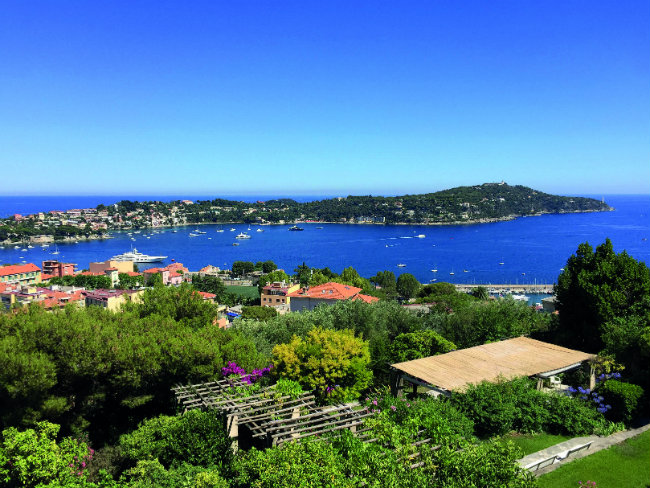 Eighty students, 19 nationalities, and 8 hours a day of intensive French language instruction – these are only a few of the factors that have drawn diplomats, politicians, and Francophiles (like me) from around the world to this French language school on the French Riviera since 1969.

The Institut de Français is the brainchild of Parisians Jean Colbert and his wife, Madeleine, who traded in their comfortable south Californian life in the 1960s, where Jean was employed in the aerospace industry, to return to France and start their own language school. “It was her idea,” said Jean. “She is fluent in three languages, and she thought there wasn’t, in France, a type of school of French for adults that had a pleasant atmosphere. So I said, all right, I’ll try.” 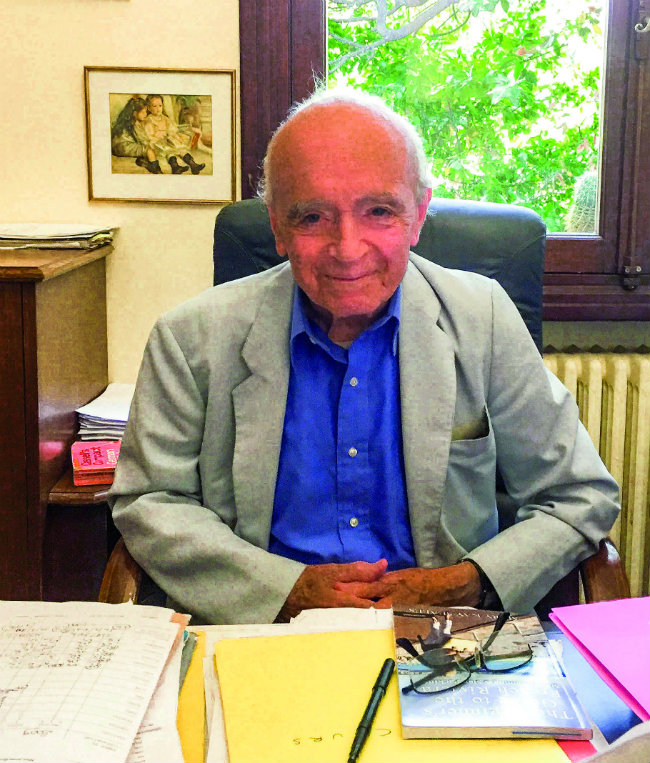 As a scientist, Jean wanted to find the most effective approach to language teaching, which ultimately was provided by the French government. Called the St Cloud-Zagreb method, or ‘Total Approach’, it stresses the application of the language – basically, you actually need to use the language in order to learn it.

What this means in practice is that from the moment we walked in the door of the Institut at 8am to have breakfast with our classmates until the end of the day at 5pm, we were not allowed to speak our first languages. Mon Dieu! This wasn’t easy for any of us, to say the least, even the advanced students. And those poor débutants who came to the school with no knowledge of French? “Bonjour” doesn’t get you too far. You start learning fast! 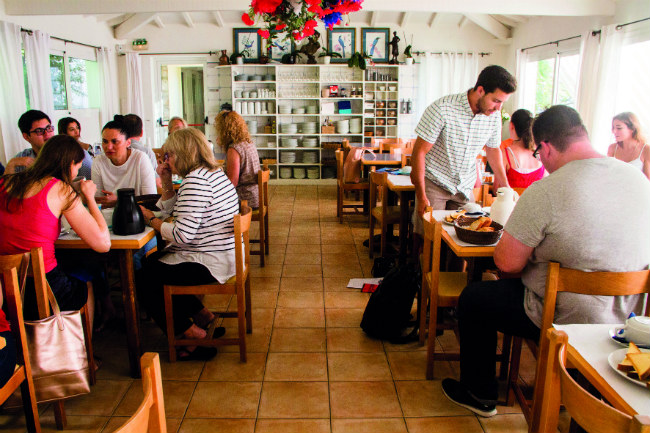 It’s a strict policy at the school, and we broke the rule at our peril. One day at lunch, we were given a talking to by Monsieur Latty, the Teaching Supervisor, who had overheard English being spoken. I felt a bit like I was back in junior high. But then this is the reason we all came to the school, to really learn the language. The constant and complete immersion truly pays off. I found myself walking along the little streets on the way to the beach each day talking to myself in French. My classmate’s husband even reported that she had been speaking French in her sleep! 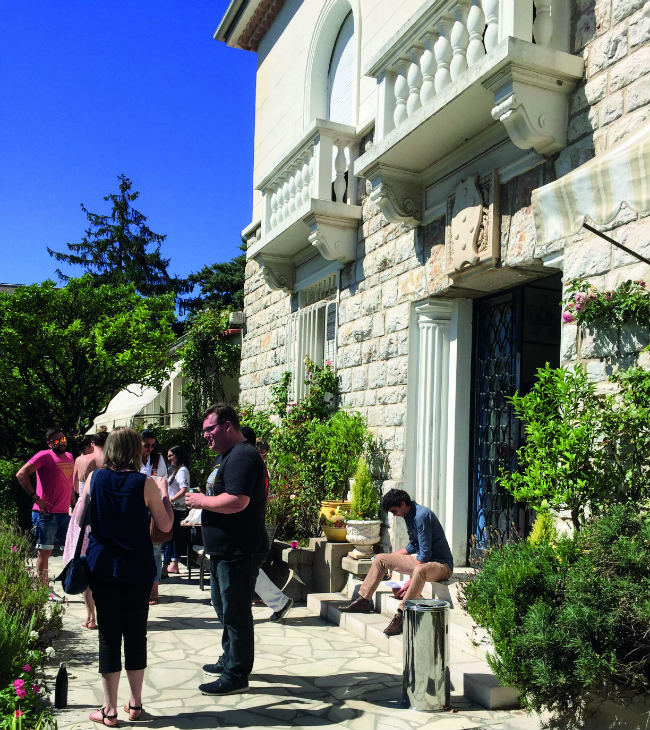 Students on the terrace between classes. Photo: Mary Kay Seales

Though there are some 80 students in each four-week programme, the classes are divided up by level, with a maximum of ten students per class. My small class of nine students included me (surprisingly the only American in the group); two lovely Australian women, plus a Tasmanian woman who now lives in a small village in France and who became a close friend; a young Palestinian man who was oh-so cool; a young woman from Turkey who looked liked a fashion model but was actually a human rights lawyer living in London; a brilliant young woman from Venezuela who filled us in on the current situation there (in French); and a beautiful man from Sri Lanka, raised in Italy, married to a German woman, and now working for the World Bank in Washington, DC. 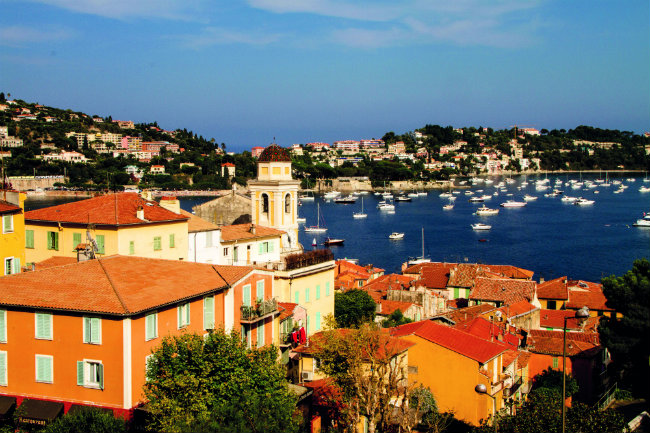 The ninth student in our group was a high-ranking politician from Denmark, from the Ministry of Foreign Affairs, Ms Karen Ellemann. “In the Danish parliament,” she told us, “we are entitled to practise European languages, so we can actually take classes in Copenhagen, and so I signed up for French. One of my colleagues highly recommended the Institut de Français here in Villefranche, and it was arranged for me to come – it’s actually my second time here.” 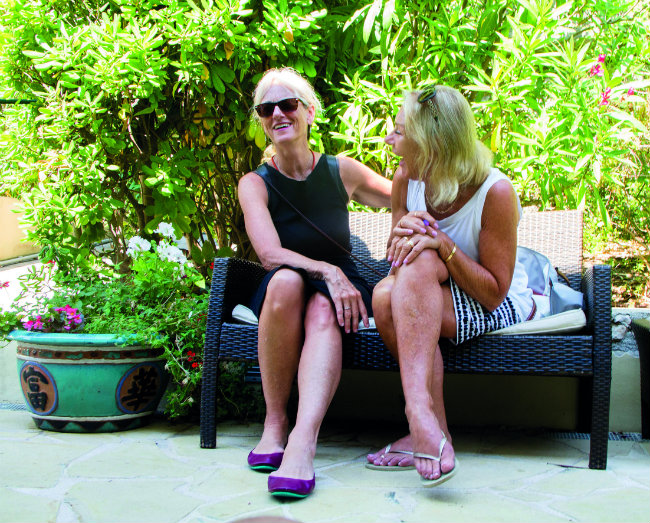 The author with her classmate, Ruth.

I loved the international nature of the programme, and where else could I have such a group of friends who all found themselves in the same boat?

We were like war buddies in the trenches together, and a deep sense of closeness developed quickly. It was summer camp for adults. 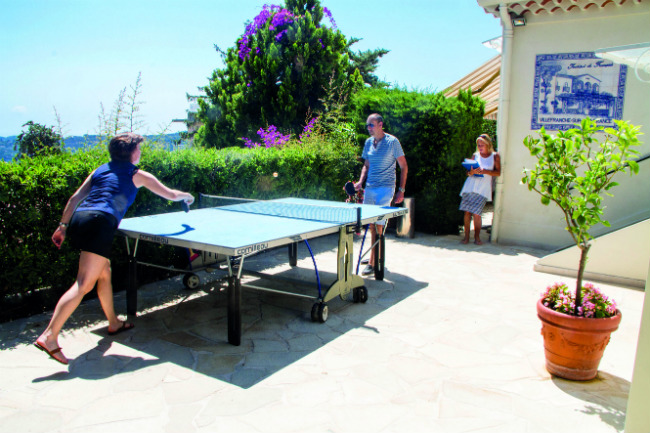 Our school day was divided into various activities, from individual classes to time in the language laboratory, and an afternoon séance, where several classes are joined together to learn about social language skills such as answering the telephone or being a guest at someone’s home. We advanced students thought we knew how to do these things quite well, but our charming and witty professor, Julien Cassagne, offered something new every time – common expressions we didn’t know and useful information about cultural norms, like how to get away politely at the end of a dinner – simply look at your watch and say “Oh-la-la-la. Je n’ai pas vu le temps passer!” Which (as well as being the title of a Charles Aznavour song) translates more or less into “Oh my, my, my. I didn’t realise how late it was.” It’s good to know these things. 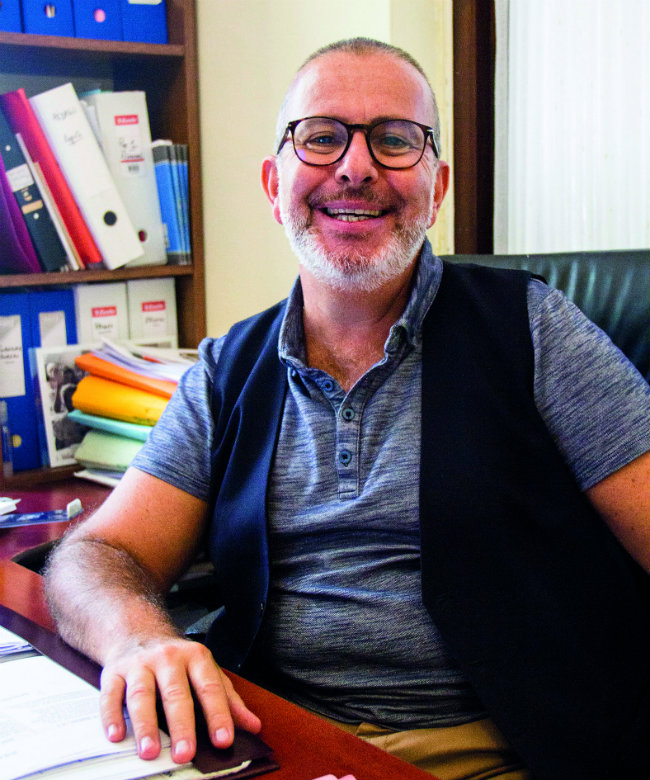 In the late afternoon sessions we had the dreaded exposé, where each student was required to speak in front of the class on a topic of their choice for a set period of time. For the advanced classes, this was 20-30 minutes followed by questions from our classmates – all in French, mind you! Most of the students were terrified at the prospect, talking about it as if they were waiting in line for the guillotine. 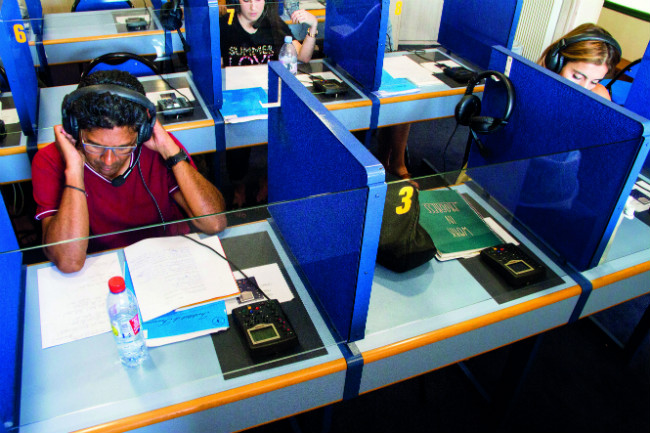 As a university language teacher myself, I was constantly observing the teaching methods employed. I think I can say with some authority that the teachers at the Institut are masters of their craft, and that their method is highly effective. This is surely due in part to Monsieur Colbert’s insistence on searching for highly-qualified instructors, and the Institut’s continued training of those hired. He asked me to guess how long it took him to find their last new hire. I guessed six months. 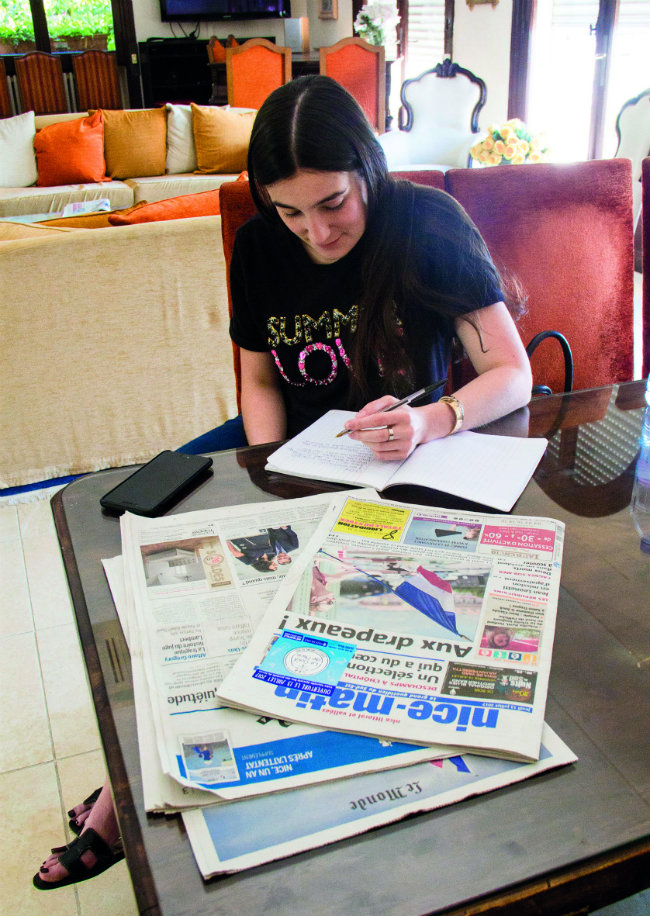 Monsieur Colbert does the hiring, but Monsieur Frédéric Latty, who has been with the school for close to 30 years, oversees the training. “We want teachers who have an iron fist in a velvet glove,” he explained, “une main de fer dans un gant de velours.”

As my très excellent teacher, Monsieur Bruno Préau, told me, “When I started teaching here I had to forget everything I had learned about language teaching at university and start over.” I can say that whatever they are doing at the Institut de Français, it has resulted in excellent teaching staff. 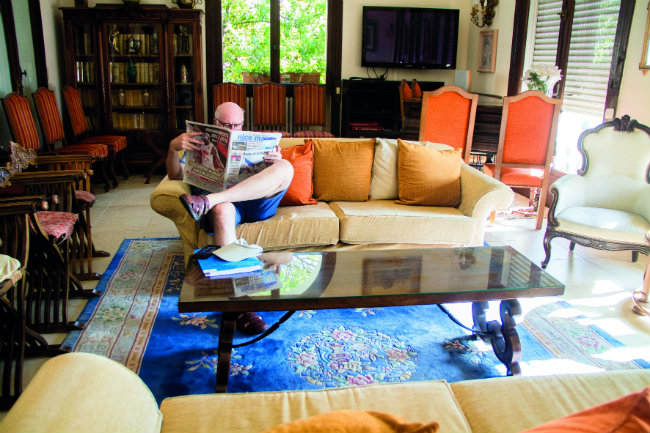 The school’s greatest asset, besides teaching French well, is its spectacular setting. The little town of Villefranche-sur-Mer is certainly one of the most picturesque along the Riviera coastline, with its ochre, orange and yellow buildings with blue and green shutters stacked up into the rocky hillside. There are sandy beaches, and an Old Town with winding cobblestone streets filled with shops and open-air restaurants, and, wherever you look, the blue sea.

Add to this the lively Saturday and Sunday markets, an open-air cinema at the Citadelle (a gigantic 16th-century fort that takes up half the town), and convenient access to other towns and cities on the French Riviera by bus or train, and you can see why it is not hard to have a lovely experience here. 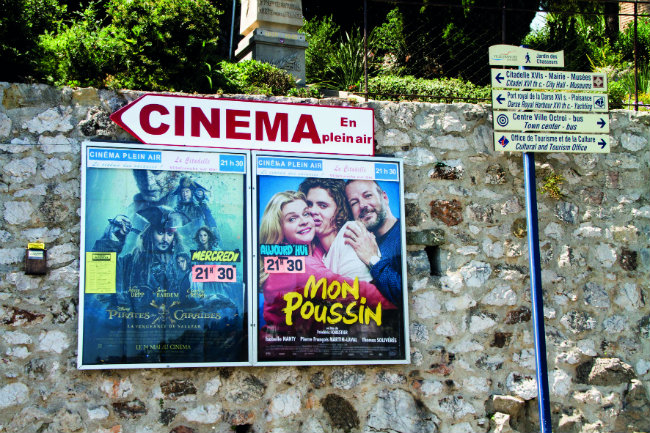 Though the school arranges extracurricular activities each week – a dinner in town, a tour of the Citadelle, a boat trip to Monaco – you can choose to participate or not. I typically headed to the beach for a swim after class because my head was about to explode from speaking French all day. That said, when my two weeks there ended, I was desperate to get back into it.

My one-bedroom apartment, situated next to the school on the steep hillside of Villefranche, overlooked the sea below. It was a beautifully appointed, modern place with a terrace where I could have my coffee each morning – and finish my homework – before leaving home for class. 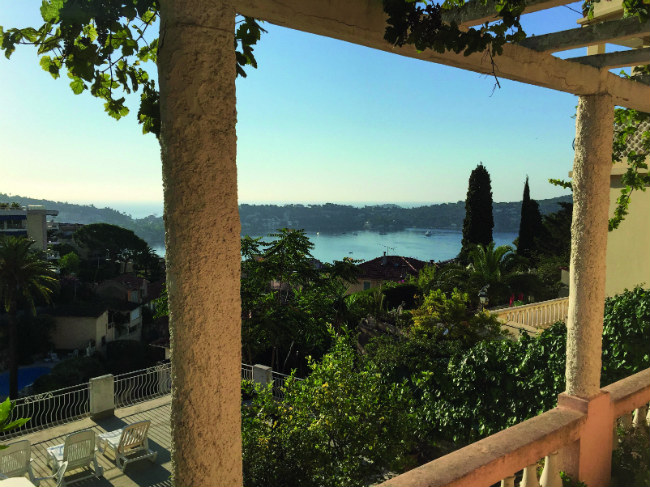 The entrance to my apartment complex. Photo: Mary Kay Seales

Of course, hiking up and down the hill each day to visit the town, to shop for groceries (faire des courses), to swim, or to manger au restaurant, you need to be part billy-goat. I thought after the first week I would either have a heart attack by the end of the programme or I would be ready to climb Mount Rainier when I returned home to Seattle. My legs are perfectly toned now, but I won’t miss that hike.

One additional amenity that is provided by the school is two meals each day: breakfast and lunch, both at the school and both requiring that you speak only French, of course. Breakfast was a very light meal, but lunch was full on with an entrée, two main dishes and a dessert of some kind. No wine unfortunately, since they needed us to stay awake for the afternoon classes. The teachers join the students for lunch, which means, you guessed it, more speaking in French. It’s a very strict policy at the school. 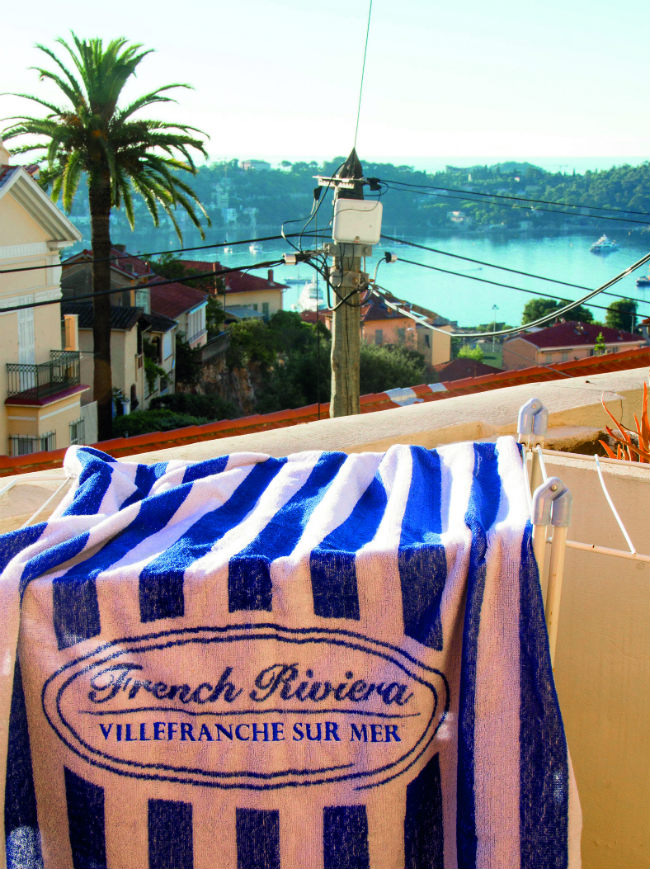 The Institut de Français is everything I had hoped it would be and then some. I met amazing people, seriously improved my French, had beaucoup de fun with my classmates both in and out of class, and fell even more deeply in love with the Côte d’Azur.

And although I was enrolled during the height of the tourist season in July, with sunshine and beaches and activities all along the Riviera, I can imagine having an equally remarkable time in any season – in autumn, after the summer crowds have left; at Christmas time, with all the markets and the lovely winter blues of the Mediterranean; during the Carnaval in February; or in spring, when the weather is beautiful and fresh, but the crowds haven’t yet descended upon the beaches. And whenever you come, you will learn French.

As Monsieur Colbert concluded, “It’s the attention to everything. We try to make it all as perfect as possible.”

And for me, at least, it was. Parfait! 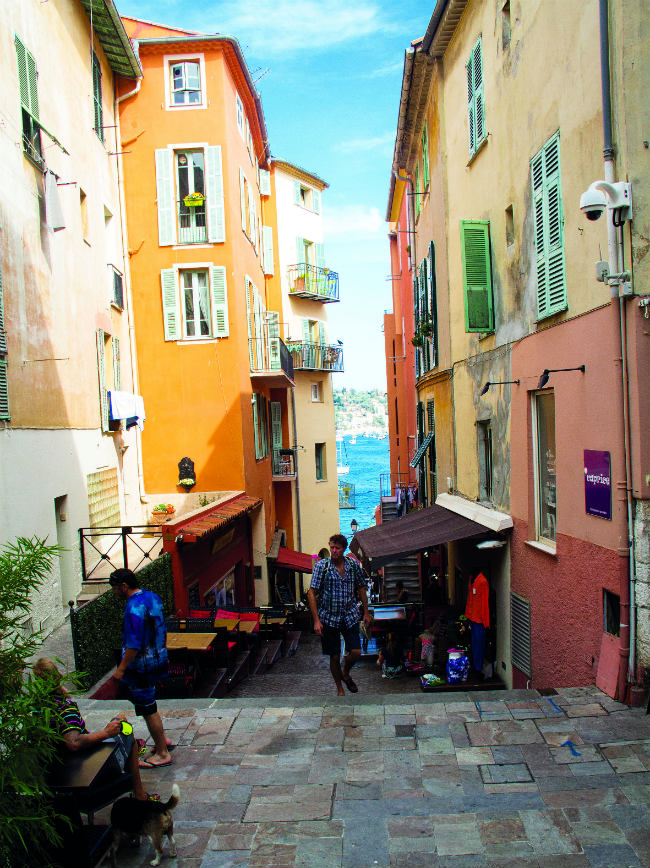 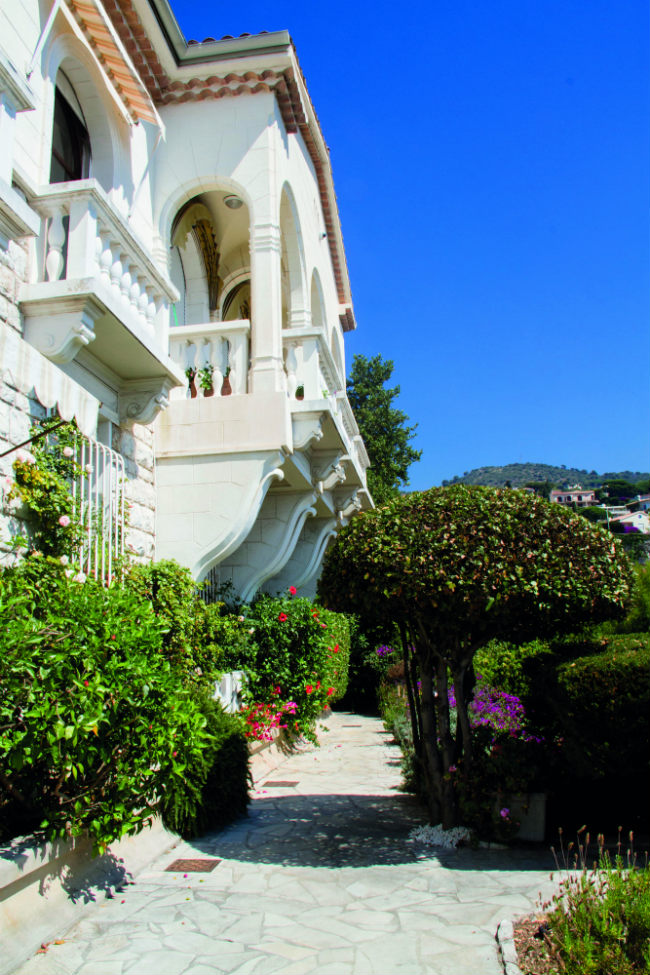 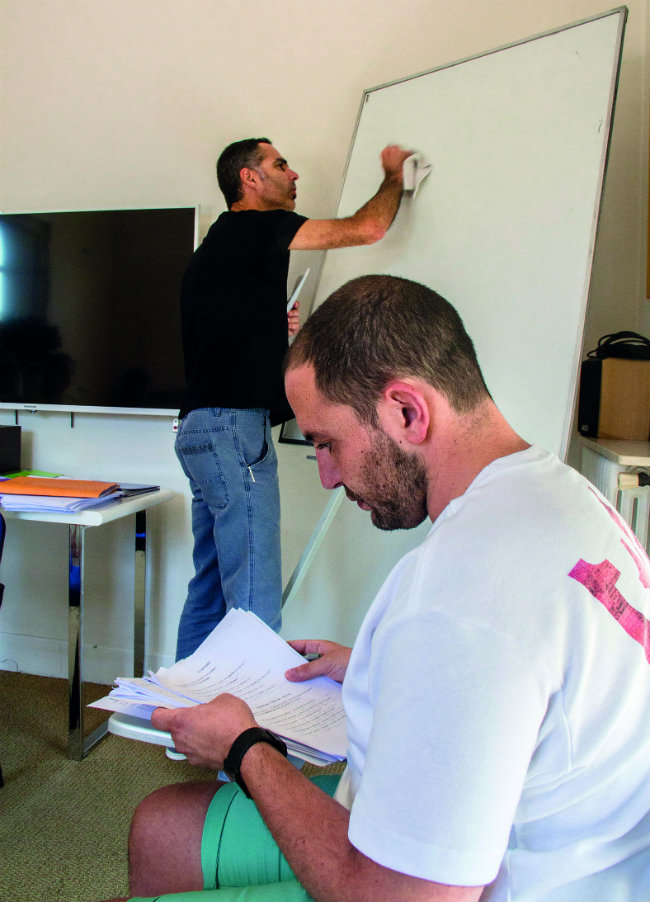 Previous Article Art and Culture Exhibits in France: 3 Rendezvous with Time Travel
Next Article The Vallée du Loir: The Other Loir is a Well-Kept Travel Secret in France