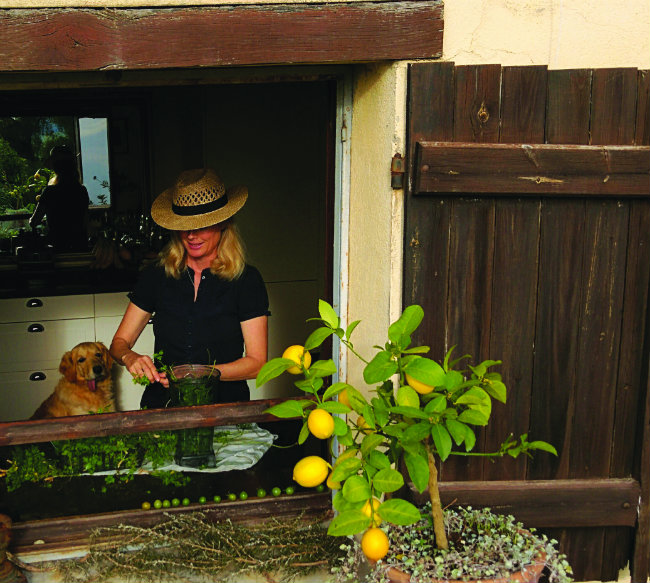 “It looks like we will have tomatoes up into November!” I tell my husband, who has just pedalled back from the beach. I am excited by the findings in our garden, and motivated to do better each year. Next time I will stake those tomatoes, which have spread like a riot across the raised beds. Though unruly tomatoes taste just as good, they are notoriously harder to find than ‘ruly’ tomatoes – which don’t disappear behind the parsley, or get tangled up with the concombres.

Here in the south of France, the weather in autumn is si doux, si doux! It’s so mild outside. I watch the locals swim in the Mediterranean and notice the farmers collecting grapes this late in the season. No sooner has Jean-Marc returned from la plage, than he has left with the kids to work on a morning-long vendange. When they are done picking, I know they will return to the beach to wash off all the sticky grape juice with the help of a salt-water bath!

This time of year I love to see which plants are flowering. The roadsides are flanked with tiny yellow blossoms called millepertuis, ‘a thousand holes’ – for their perforated leaves. In English we call them St John’s wort. Some use the flowers to treat depression. My husband uses them as a natural treatment for his grape vines (do grapes get the blues?).

Also flowering here in our potager is lemon verbena, a favourite herb of the French, who steep the leaves for tisane. The blossoms are like lacy, silver-tinted spears. They are pretty in the golden vase Mom brought me years ago from Mexico, which rests on a table beside the front door.

I’m on my way outside again, to collect another bunch of verveine – for the lemony aroma which freshens the house and, some say, wards off les moustiques – though my experience is that it attracts the very same!

Just last night I stood beside a teacup, holding a handful of promising leaves, when – zap! – I was bitten by a flimsy passer-by! I watched as the pest, drunk with blood, staggered off through the air, leaving its victim seething with rage!

No use letting a wobbly mosquito ruin the mood. Now where were we? Oh, yes, enjoying a quiet ramble through the countryside, at the end of a balmy October. Si doux, si doux…

si doux = so mild, so sweet

Previous Article France Today Awarded Number 1 French Website!
Next Article Where to Stay and Eat Along the Languedoc Coast