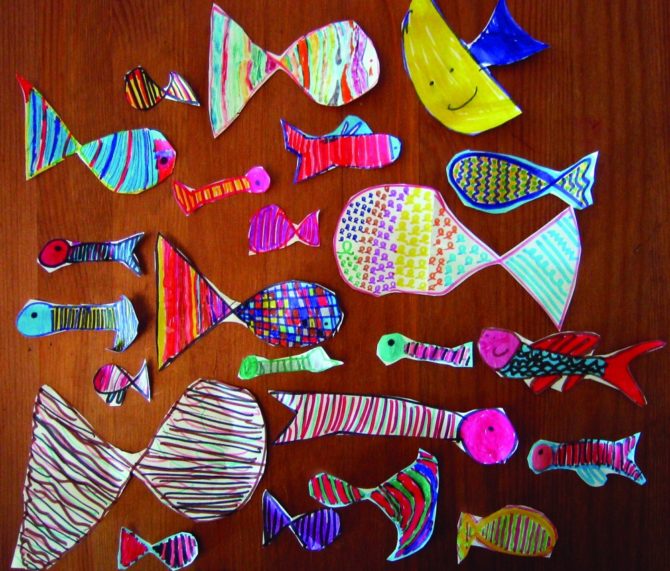 The French enjoy April Fool’s Day as much as any of us! In addition to fabricating stories (and oh, by the way, France Today will now be published in ‘pig Latin’), the French get crafty. Come April 1, they’ll be scissoring up a storm, creating paper cutouts shaped like this ><> (hint: it’s a fish. No worries if you didn’t see it right away, that’s the point of the game!). So if you happen to be in France on le premier Avril you’d do well to mind your back, lest a sneaky jester attempts a ‘paper fish attack’!

As noted, it may not be immediately obvious to the wearer that he or she has been sporting a paper fish au dos while walking from class to class or between their desk and the employee water cooler. But sooner or later the plaisanterie will be revealed – when the sticky-fingered trickster shrieks “Poisson d’Avril!” then that’s when you know on t’as eu (you’ve been had!).

Now a teenager, my daughter tells me she is too old to be colouring April Fool’s Day fish. But she and her cohorts will still be enjoying the tradition, this time by taping embarrassing Post-it Notes to each other’s backs. Rated among the most popular insults are “Tapez-moi!”, “Je suis nul(le)!” and “J’adore Hannah Montana!” – the American teen star was all the rage one year, but trendy French teens were quick to dump their fan T-shirts into the collection bin for Secours Populaire once Rihanna arrived!

I think that the blagueuses would do well to expand their repertoire of humiliation: in place of “Hit Me!” and “I’m a Dork!” they might embarrass their targets by tacking on one of these phrases: “J’ai besoin de tendresse!” (I need love!) “J’adore les guili-guili!” (I love tickles!) “Chantez-moi une chanson d’amour!” (Sing me a love song!)

Do you think that last suggestion might be a little too old-fashioned? Ah well, I guess there was an element of truth in the note that fell off my back this morning – back up a paragraph and go to the declaration just after “Hit me!”…

Maybe now is a good time to remember that all this paper fish- or note-pinning is nothing to take personally. It’s all done in good fun. And there’s nothing more amusing than payback time! Off to find my scissors and my ball-point pen, to combine both old and new traditions!

In the meantime, if you find yourself in France on the first of the month, attention à votre dos…

Previous Article Chasing the Sun: Writers on the Riviera
Next Article How the Eiffel Tower Was Sold