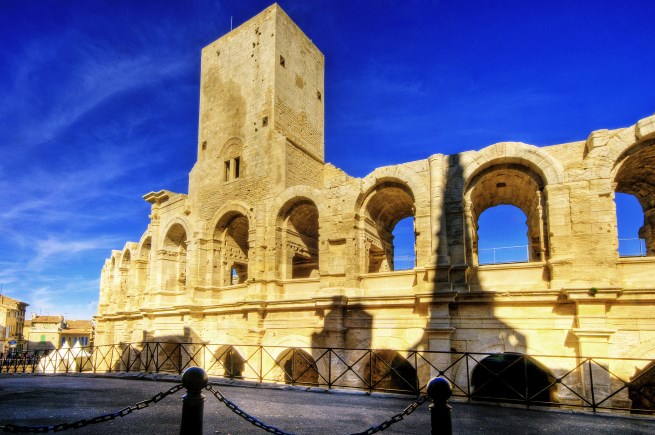 Arles is an historical and magical city. Bordered by the Rhône, la Camargue, les Alpilles and la Crau, it seems like an island. Arles is home to numerous ancient Roman and Latin monuments listed by UNESCO (United Nations Educational, Scientific and Cultural Organization) as world heritage sites. Its famous bullrings, known as Les Arènes, were constructed in the 1st century as the principal site of the Roman games, and are today home to La Féria, where thousands of devotees gather each year to watch the famous Corrida (bullfights).
Definitely worth seeing in Arles is the ancient theatre, the thermal baths of Constantin, and the Alyscamps – the exceptional ancient Roman necropolis just outside the old town, which at one time became so desirable that bodies were shipped from all over Europe to be buried there.

Arles is also famous for being the home of Vincent Van Gogh during part of his life. One can follow the footsteps of this renowned painter who settled in Arles in 1888 and where he painted over 200 canvases, including his famous Sunflowers. Visit the Café Terrace on the Place du Forum where he painted one of his most well-known pieces, ‘Cafe Terrace at Night’. A Van Gogh centre has been created in the garden of the former Hôtel Dieu, which has been impeccably restored and landscaped to match one of the artist’s paintings, with a permanent exhibition that pays homage to the artist by various contemporary artists such as Francis Bacon, David Hockney and Roy Lichtenstein. This site was the hospital to which the tortured artist admitted himself after cutting off part of his earlobe.

There are a plenty of other museums worth visiting in Arles as well: the Réattu Museum, which includes over 70 Picasso drawings, the Musée de L’Arles et de la Provence Antique (Prehistory to Romans Museum), and the Arlaten, a folklore museum.

Arles is also home to the oldest international photography festival in Europe, Les Rencontres Internationales de la Photographie, which is held here each summer. Thousands of photographers take over this tiny town during the summer. The French national school of photography is also located here.

Perhaps slightly more unusual is the Rice Harvest Festival in September, where for three days the cobbled streets of Arles are home to the most spectacular Spanish fiesta in France. Streets are scented with the smell of paella, bulls are set loose for a ritual running each night, and the best matadors this side of Madrid come to the famed Arène d’Arles. Don’t miss the highlight of the festival – the crowning of the Rice Queen! A local beauty, the Rice Queen is showered with rice from the riverbanks as she sails down the Rhône River on a barge.