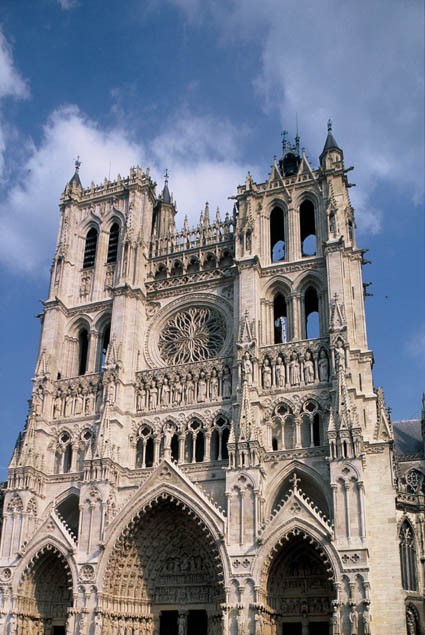 They are one of the greatest architectural achievements of Western man. They are the most precious possessions of a country unsurpassably rich in things that generation after generation still recognise as treasures of enduring worth. They are the Gothic cathedrals of France.

An extravagant introduction? But what can rival them? With rare exceptions, the architectural legacies of Greece and Rome lie or stand as fragmentary ruins, or scattered throughout a multitude of museum galleries in statuary beauty, bear witness only to the annihilation of the societies that created them. Collectively, even the great châteaux of the Loire, raised not to the glory of something beyond man, but to mankind at its most temporal and ephemeral – to nobility, to monarchy –  must rank as trivialities by comparison.


By contrast, having as living entities already outlasted any of the man-made creations of Greece or Rome, the great Gothic cathedrals of France still command a unique recognition and respect. It may not be a general supposition that a visitor to this or that city will be interested in, say, its museums, but that he or she will pay at least a fleeting visit to the cathedral is taken for granted, and in the tourism authority’s hierarchy of attractions the cathedral unfailingly heads the list.

Strange – that Giorgio Vasari, eminent 16th-century authority on art and architecture, friend and pupil of Michelangelo, should have used “Gothic” as a term of contempt. To the Romans and their successors of the Italian Renaissance, the Goths were still the uncivilised Germanic tribes beyond the Alps who had harried the Roman Empire in the fourth and fifth centuries. “These barbarians”, said Vasari, referring to the 11th- and 12th-century pioneers of Gothic, “have evolved a style which is a mere jumble of spires, pinnacles and grotesque embellishments altogether lacking in simple, classical beauty”. Such beauty, as Vasari recognised it, was to be found in the “Romanesque”.  But Roman civilisation (whose architecture owed so much to the Greeks) and the ‘dark ages’ that succeeded it had gone; the advance of Islam had been contained, then halted; Christianity was triumphant. What Vasari’s “barbarians” did was instinctively to try to express the spirit of the times.

Deriving from an age when even religious buildings might be required to serve as fortresses, there was something a touch too sturdy, too solid, too defensive, too sombre about the Romanesque for communities that were growing not only in comparative prosperity and size; but even in optimism. Figuratively and literally, more light and unencumbered space were required. An elementary engineering problem was involved. The ceilings of Roman – and thereafter Romanesque – buildings were almost invariably made of solid stone, which required the constructional device of the vault, or arch, to transmit the weight of the ceiling  (the ‘thrust’) to the supporting walls. The dynamics of the arch resulted in the thrust being outwards (horizontal) as well as vertical. To provide the requisite support for the weight of the ceiling, and to counter the horizontal thrust, the walls themselves needed to be commensurately substantial.


Then came the introduction of the pointed arch, the ribbed vault and, a little later, the ‘flying’ (as different from the ordinary) buttress. Now, thrust could safely be transmitted more vertically than horizontally. Now, walls no longer needed massive solidity, relieved only by the meanest of window apertures or doors. Now, the overall verticality of the whole building could safely and spectacularly be increased. Hence, the most familiar and significant attributes of the Gothic cathedrals – the impression that walls have been replaced by a mere skeleton of window frames, the soaring columns, the transcendental height of the roofs, the great naves – all these impose a sense of wonder. Respectful or not, devout or impious, to enter them is involuntarily to lower one’s voice, to tread softly and more slowly than almost anywhere else on one’s sightseeing itinerary. Many an unbeliever has knelt, not in devotion but in awe.

It is exactly the emotional effect that the great cathedral builders intended, and is a testament to their genius. The religiosity of the middle ages in Western civilisation may be almost impossible for 21st-century mankind to appreciate, but for serfdom, nobility and monarchy alike, the Church was paramount, and Christian churches of whatever shape or size were quite literally the houses of God. (Apart from all else, it was this that ensured the provision of the huge funds needed for the creation of the cathedrals. Through financing construction of such architectural treasures on Earth, both peasant and wealthy patron alike hoped to secure their place in heaven).


It was an age when the real and the symbolic in religion were inseparable, a principle considered to have been most influentially demonstrated in the royal abbey church of Saint-Denis (he who walked with his head from the place of his martyrdom on Montmartre) in the northern suburbs of Paris. In charge of Saint-Denis from 1122 to 1151 was Abbot Suger, a man deeply influenced by the teachings of Bernard of Clairvaux. Bernard held that the physical circumstances of spiritual meditation were vitally important; light and space being among the prime requirements. The abbey of Saint-Denis had been a holy place from at least the 6th century. Finding it in a dilapidated shape, Suger applied the still nascent Gothic techniques in his work of rehabilitation to conform with Bernard of Clairvaux’s precepts, by bringing the divine presence into the church through an increase of space and light. It was a transformation that was to characterise the entire course of the Gothic revolution to impart what so moves us today.

The great Gothic cathedrals of France still command a unique recognition and respect. “A man who has not been in Italy, is always conscious of an inferiority, from his not having seen what it is expected a man should see”, said Dr. Johnson.  The aphorism is eminently adaptable to France and its cathedrals. To visit Chartres and not see Notre Dame and its rose window is an aberration. To go on a wine tour to Champagne and not to see Notre Dame de Reims is something to keep quiet about. It is no shame to have been to Amiens and done nothing except spend time in the largest of all the Gothic cathedrals. To go to Bourges except on business and not to see Saint-Étienne would be like going to London for the first time on pleasure and ignoring Westminster Abbey, or to Paris and not seeing the Arc de Triomphe.

Proof of the enduring significance of the cathedrals in millions of lives? Go to almost any of them on any day in the year and note the candles burning in the shadows, and not infrequently a camera-toting tourist kneeling in prayer.