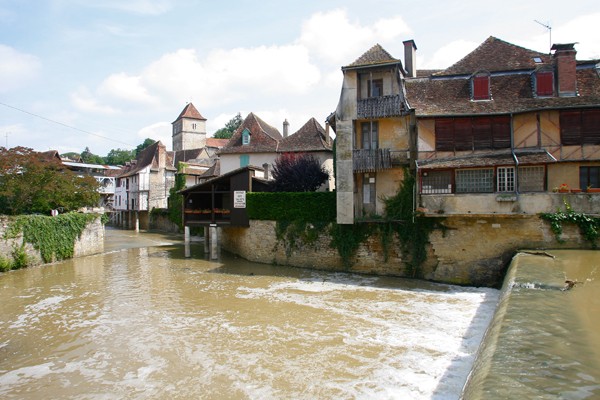 When Henri IV succeeded to the throne of France in 1589, he was king of Béarn and Navarre. Knowing that his proud people would not relish being absorbed by the French, he declared to them: “I am not giving Béarn to France. I am giving France to Béarn.”

Béarn today is the larger half of the département of Pyrénées-Atlantique, shared with the Pays Basque to the west. It’s a lush land of a thousand different shades of green, pierced by deep valleys and gaves-rushing rivers highly prized by fishermen for their salmon and trout. For many of the French, Béarn still represents reassuring stability, an idealized pastoral and agricultural France profonde in the face of an uncertain

The Béarnais share many other things besides their département with their Basque cousins, including the béret, which was in fact originally Béarnais, and jambon de Bayonne, first developed in Salies-de-Béarn by curing ham with salt from the town’s springs.

And, even more than for the Basque country, the defining feature of Béarn is the stunning vista of the snow-capped Pyrénées, filling the southern horizon like a majestic battlement wall. The mountains partially account for the legendarily independent character of the Béarnais, somewhat mellowed by a mild, almost Méditerranean climate that also—witness those verdant valleys—gets a lot of rain, especially in the spring.

The Béarnais language, a variant of the langue d’oc, is still spoken by many and is once more being taught to schoolchilden. And like their beloved Henry IV, “Lou Nouste Henric,” the Bearnais have a well-established appreciation for their hearty southwestern food and regional wines—sweet or dry white Jurançon, rosé de Béarn, Béarn-Bellocq, Madiran and white Pacherenc, also both sweet and dry.

Pau, the regional capital, is perched on a cliff over the wide Gave de Pau, with an unparalleled view of the mountains from the terrace of the Boulevard des Pyrénées. The narrow cobbled streets of the old quarter lead to the château, an almost cartoonlike hodge-podge of a castle begun by the Vicomte de Béarn, Gaston Phébus, in the 14th century and meddled with by just about every sovereign who followed. Like the city itself, it’s full of beguiling, low-key charm.

Henri IV was born in the château in 1553, the son of Henri de Bourbon and Jeanne d’Albret. On his father’s side, he was directly descended from Louis IX, Saint Louis. His maternal grandfather was Henri II d’Albret, a rough and ready bon vivant, and his grandmother Marguerite d’Angoulême, the sister of François Ier, was an intellectual and poet who wrote the Tales of the Heptaméron, inspired by Boccaccio’s Decameron. When Henri was born, his grandfather gave him a “Béarnais baptism”—rubbing the infant’s lips with garlic and a drop of Jurançon wine.

Henri’s cradle was the shell of a giant tortoise, a curiosity now displayed beneath a pyramid of lances holding a gold knight’s helmet replete with white plumes. Given the quirky look of bemusement on the dozens of statues of him now strewn around the château-museum, it’s possible that Henri have found the tortoise-shell shrine a bit over the top.

But the rest of the castle is worth the price of admission, including a grandiose dining room table that seats 100 guests, and rooms opulently refurnished in the 19th century under Napoléon III and Louis Philippe, both of whom were anxious to establish their connections to the direct descendant of Saint Louis.

It was also in the 19th century that Pau became known as la ville anglaise, a fashionable health resort for wealthy English folk. That notoriety earned the city a bevy of elegant English villas, the first golf course on the European continent, and horse-breeding and fox-hunting traditions still alive today.

The Musée des Beaux-Arts offers an eclectic collection—El Greco, Breughel, Rubens, Zurbarán, Degas’s The Cotton Exchange in New Orleans plus local contemporary works. The small Musée Bernadotte is the former home of Jean-Baptiste Bernadotte, one of Napoléon’s maréchals, who became King of Sweden in 1818, founding the Bernadotte dynasty that still reigns in Sweden today, and making this modest Béarnais city the birthplace of two kings.

Perhaps a better base for forays into the countryside, though, is Orthez, lively but smaller and easier to negotiate. It’s an authentic Béarnais town, the home of Jeanne d’Albret, whose former manor house now houses a small museum of Protestantism in Béarn. The formidable Jeanne was a devout Protestant who imposed Calvinism on her realm and on her son, Henri IV, until he bartered his faith for the crown of Catholic France (in his famous phrase, “Paris is well worth a Mass”). The main street in front of Jeanne’s house leads, on one end, to the “Château” Moncade—an imposing 13th-century tower with a panoramic view—and on the other to the fortified Vieux Pont.

Between Pau and Orthez lies Lacq, and a modern-day tale. Until the mid 20th century, Béarn was an economic backwater, and rural life was harsh. Then, in 1951, the largest deposit of natural gas in western Europe was discovered here. Within a few years the immense gas plant at Lacq brought in thousands of workers, jobs and wealth to the entire region, and spawned a sprawling industrial complex that looks like a futuristic city from another planet.

A few kilometers and a world away, Salies-de-Béarn (pronounced SaLEES) sits atop the salt springs that gave it name and fortune. The crystallized salt was used for preserving food, notably jambon de Bayonne, and the springs—seven times saltier than the sea, it’s said—still supply the town’s thermal baths. Delightful Salies calls itself the “Venice of Béarn,” since the Saleys river meanders through, bordered by balconied houses on stilts.

Home of the béret

Nearby Sauveterre-de-Béarn is a stop on the pilgrimage route to Santiago de Compostela. The name comes from salva terra, referring to hamlets founded by monasteries as safe havens for fugitives and wanderers. It’s still an appealing place to wander, past stone houses topped by steep, slightly turned-up Béarnais roofs made of red tiles called picons. Only half of the 12th-century Vieux Pont still stands, site of a legendary trial by divine judgment: In 1170, the widow of Gaston V de Béarn, accused of murdering her newborn child, was thrown off the bridge bound hand and foot; she floated safely to shore, and so was “proven” innocent.

Tiny Navarrenx is surrounded by the remains of its medieval walls, considered a perfect example of 16th-century fortifications. It too is a stop on the pilgrim route (also a good café stop on the route de tourisme), and the site of the annual World Salmon Fishing Championships. Or so they are called.

Red tile roofs give way to the gray slate of mountain towns like Oloron-Sainte-Marie, where a chocolate factory fills the whole town with its aroma. The béret Béarnais is made here, and so are Artiga “Basque” linens. But the star attraction is the superb 12th-century portal of the cathedral, a UNESCO World Heritage site. Sculpted in Pyrénéen marble, the astonishing tympan portrays Biblical and allegorical figures along with fishermen (toting very big fish), hunters, farmers and cheesemakers. On either side, a mounted King Constantine treads on the head of Paganism, and a monster devours a man.

Straight south of Oloron, the Aspe valley is deep and narrow, with meadows full of sheep grazing and small groups of pottocks, an ancient breed of horses thought to be neolithic. Villages pop up here and there: Sarrance, with a pilgrimage church and cloister; Bedous, where a turnoff leads down to the river and a perfect picnic ground beside a limpid salmon pool. Near Accous there’s a small aluminum factory owned by the Japanese company Toyal. It’s incongruous, and recently the cause of controversy: When the owners announced they would build another factory at Lacq, local congressman Jean Lasalle, fearing the old one might close after the new one opened (only 43 miles away, but out of his district), went on a hunger strike to put the kibosh on the new project. Even more bizarre, he seems to have won.

Farther along, a turn off the main road winds up to Lescun, a flower-decked stone village with a café and a plain stone church with an ornate Baroque altar. The village sits in a majestic cirque of needle rocks, but climb a little higher above the church for the valley’s most breathtaking view.

Sadly, all is not idyllic in this mountain paradise. The two-lane Aspe Valley road is a pleasure on weekends, but weekdays it’s heavy with truck traffic crossing from Spain through the Somport tunnel. In June 2007, a truck carrying chemicals went off the road near the Lescun turnoff, spilling thousands of gallons of toxic liquid into the gave, destroying fish and vegetation along a four-mile stretch. Farther down, the river eventually diluted the chemical disaster, and now nature has begun to mitigate the damage, but a segment of  the river and its banks are still closed off to the public.

Heading back, a detour north of Oloron will take you through the hilly vineyards of Jurançon, a beautiful drive on peaceful country roads where you can stop for a tasting wherever you see a dégustation sign. One great bet is the Château de Rousse, near La Chapelle de Rousse almost directly south of Pau. There, on the former hunting grounds of Henri IV, the Labat family produces award-winning Jurançons on steeply terraced vineyards. Geneviève Labat graciously shows visitors around, and a chat about the beauty of her garden leads inevitably to talk of rain, and the generous quantities of it in the region. “Ah, oui,” she says with twinkling eyes and musical accent, “in Béarn we don’t lack for water…or for wine.”

Originally published in the July 2007 issue of France Today; updated in October 2010