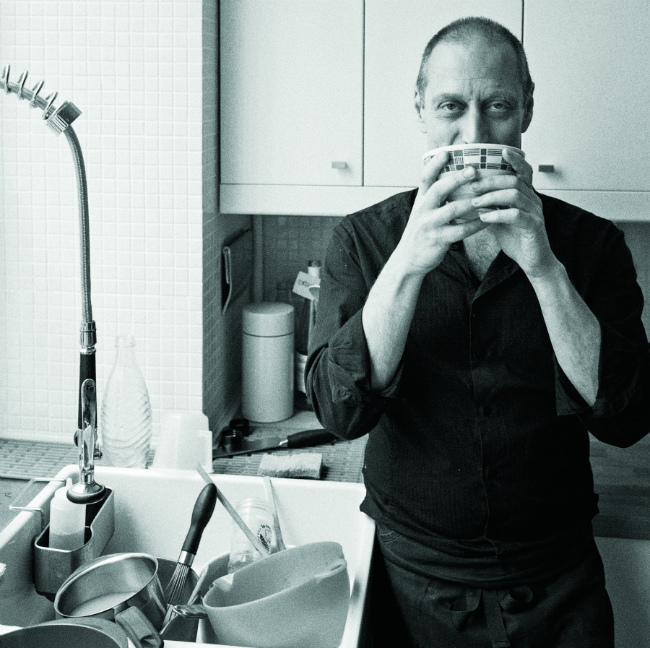 If David Lebovitz hears “Pas de problème” one more time he will blow his top.

Two years since the cataclysmic at renovation which sent him teetering on the brink of a nervous breakdown, the food writer still bridles at the mere whisper of his obsequious contractor’s loaded catchphrase.

“The longer you live in France, you realise that this phrase doesn’t necessarily mean that there’s no problem, so you quickly learn not to take it at face value,” he reflects with a chuckle. “I don’t know how else to say it in a nice way but… There’s always a problem!” 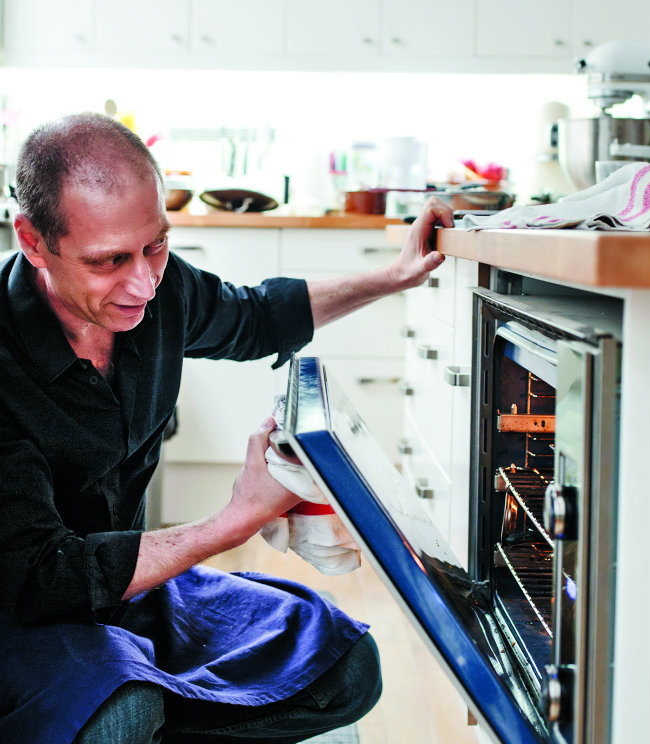 It is difficult to match the cheerful chap, happily launching into a blow-by-blow of his ill-fated remodelling, with the harried man at loggerheads with a cowboy builder, so candidly and wryly described in his (riotous) new memoir L’Appart.

“French people often go into a situation expecting something unexpected to happen. Whereas Americans always think, ‘Oh everything is going to be great’ and then it doesn’t happen. When people say to me, ‘In America…’ I just say ‘No, this is NOT America’,” laughs the former chef, who took a leap of faith and moved from California to a cramped chambre de bonne in Paris in 2004.

After more than a decade spent navigating Parisian etiquette, altogether nailing the expat lark (and sharing its minutiae, along with heaps of recipes on his blog), four years ago the acclaimed author of My Sweet Life in Paris took the momentous decision to make the City of Light his home for good, and buy an apartment.

But nothing quite prepared the happy-go-lucky, and by his own admission gullible, Yankee for the harrowing trials ahead. 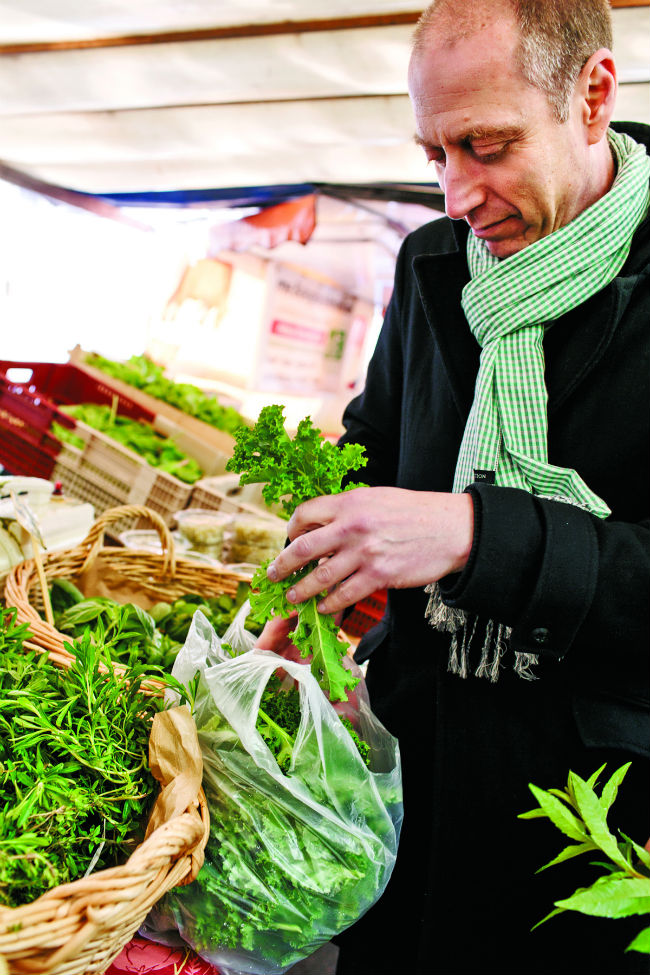 From the uphill battle of coaxing uninterested estate agents into arranging flat viewings to the small matter of getting a loan – this takes a rather intrusive physical to reassure his bank he won’t pop his clogs before the end of his repayment schedule – L’Appart recounts his hilariously Kafkaesque quest to nab a little pied-à-terre to the last excruciating detail.

But things take a wretched turn when, after a protracted search, he finally unearths a fixer-upper in the 11th arrondissement, and crosses paths with his soon-to-be nemesis, Claude. Over the course of the renovation, the hapless contractor succeeds in bungling orders, botching the most banal of DIY jobs, sending David off on a wild goose chase for imaginary heated floorboards, and generally booby-trapping the flat Home Alone-style. In one laugh-out-loud passage, a dejected David calls upon experts to gauge the extent of the damage. They take one look at the sorry mess of exposed half-melted wires, flurry of plastered- over miseries and upside-down windows before laughing him out of his partially-condemned hovel… Their post-mortem truly beggars belief. 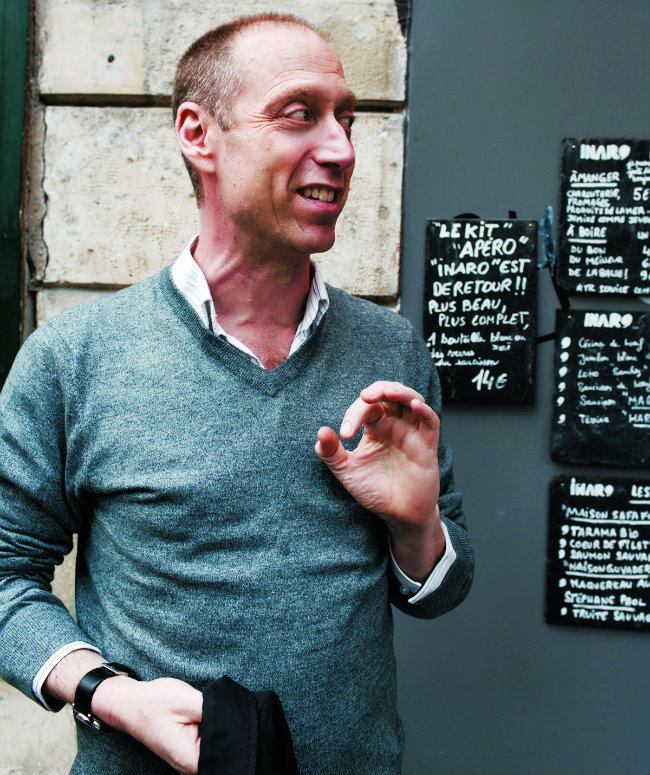 “Everything got fixed but there are still lots of what I’d call souvenirs,” he says breezily. “Things I look at and think, ‘Why would somebody do that?’ Like the USB cords still hanging down from the wall. I’m still trying to figure out what they were thinking. Surely they’d know you plug things into the wall, not out,” he adds, in utter disbelief.

“Two of the most astounding things for me were how he managed to install the water filter upside down, when he told me he had the same one at home. The other thing was the floors that were supposed to radiate heat and melted…”

Loath to pass the buck, the refreshingly self-aware writer lays (part of) the blame at his own door, and his very un-French compulsion to be nice.

“Now if I did it again, I’d be an a**hole from the start,” he cuts right to it. “I was a naïve American who thought, ‘I’m just going to buy an apartment and have it fixed up’,” he sighs. “I often tell people, ‘If you want to be comfortable, stay home’. But I chose to move to a foreign country, which is not easy for anybody. In America, we say, ‘Yes, we’re all friends’. That maybe works there but it’s a different strategy in France. It’s not a criticism of France, it’s a cultural difference.” 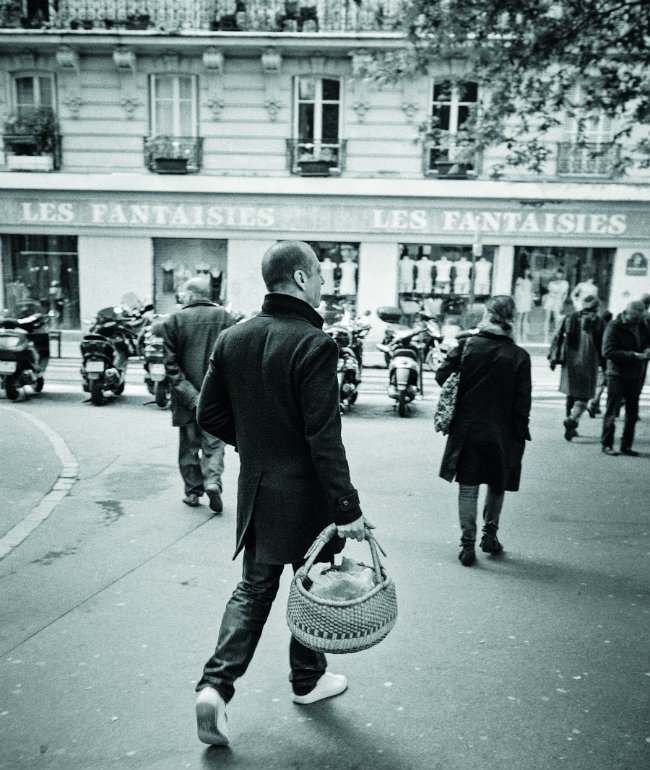 He would not have survived this year-long ordeal without his compact, yet remarkably strong-willed French partner Romain, who, armed with Gallic pluck and his own catchphrase “C’est pas correct!” (It’s not acceptable), did his level best to keep the elusive and laissez-faire building crew in check. The no-nonsense Frenchie also talked David through many an Ikea meltdown. Sadly though, his calming influence was not enough to stop the riled-up writer from blowing a gasket and grabbing a bemused Claude by the collar after one too many spurious excuses in one blind (and uncharacteristic for the mild-mannered American) fit of rage.

“That was the last straw,” he concedes, suddenly subdued. “There were a couple more times where I blew up, but I left those out of the book,” he quickly rallies. “My partner couldn’t believe it because I’m usually so easy-going. I tried to assert authority. I tried… But that’s nothing compared to Romain. When French people get mad it’s kind of frightening, and so passionate,” he adds, his voice tinged with awe. “I would much rather have an American mad at me than a French person. A friend of mine read the book and said to me, ‘He’s the hero of your story.’ And actually, he built me bookshelves for all my cookery books and they’re the best built thing in the whole apartment.” 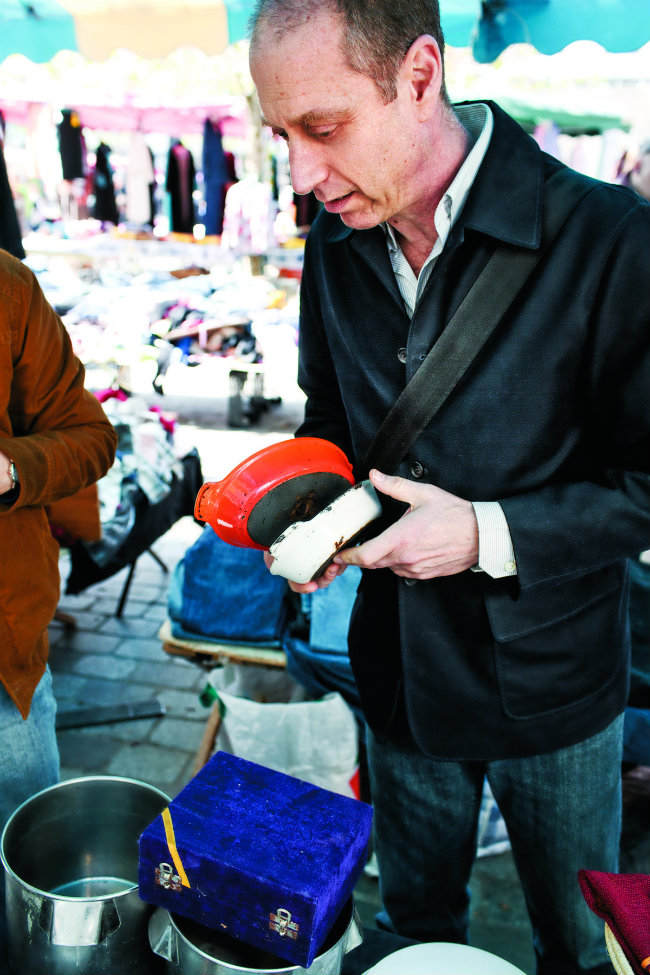 Although he reels off Claude’s catalogue of offences with gusto – chief among them, mislaying the manuscript for his bestselling book, My Paris Kitchen, which David had to rewrite from scratch – he admits the emotional strain of the renovation took its toll.

Being deprived of a working kitchen for more than a year, not only his place of work but his refuge from the daily grind was toughest of all – and nearly cost him his Parisian dream.

“My life had been put on hold and I just didn’t see the project ever ending; that was when I started getting very upset,” he confides. “There was a moment I thought I was going to leave, just shut the door and leave. I ended up staying. Oops, spoiler for the book!” 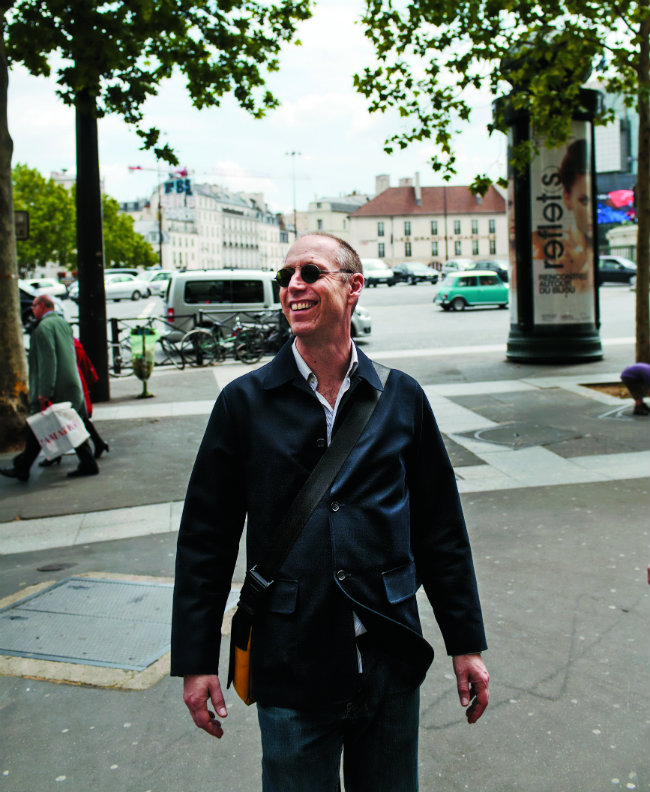 Throughout and not without humour, he seasons his nightmarish tale with two dozen (topical) recipes, each inspired by, or whipped up to distract him from, the catastrophe du jour. Among them are such classics as Kouign-Amann or tarte aux figues and the tongue-in-cheek Truth Serum cocktail – a nod to Claude.

“I decided to include them because they lighten up the story,” explains David, whose scrummy blog has become the foodie authority for the sweet-toothed. “And also because people expect recipes from my books. I’ve always told stories through recipes.”

But it was nearly two years before he could find the humour in it all, and finally commit his tug of war to paper. 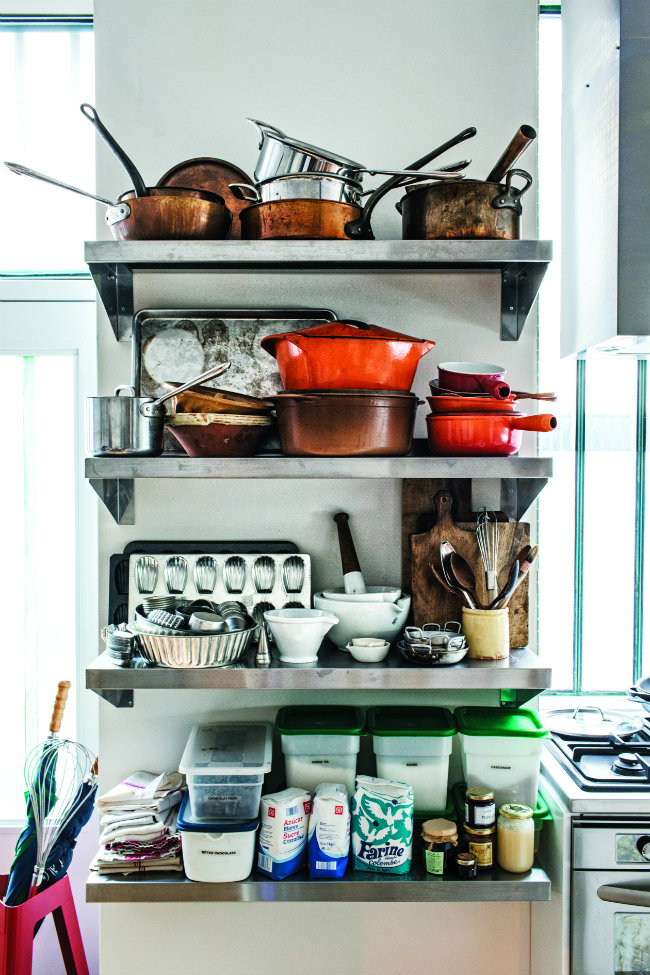 “I was walking down the street in New York City and all of a sudden it hit me. I thought, ‘I need to write this story now’. It wasn’t easy. Someone told me once that writing a memoir is hard because you have to relive everything and then when your book comes out you have to relive it again. But writing a book helped to normalise it. It’s a part of my life.

“For me writing is necessary. When I started a blog, it was an outlet to help me make sense of what was happening in my life, to help me put the whole thing into perspective.

“When I got two thirds of the way into L’Appart, something hit me emotionally. I was overwhelmed by how French people came to my aid. I don’t think it could have happened somewhere else. For all the bad rep they get for being rude, I know how lovely and wonderful French people can be when they want to help you. And I wanted to get that in the book.”

This was not his only epiphany.

“When I started writing I thought, ‘How could I be so stupid!’” he guffaws warmly. “One thing I’ve learned is that it’s okay to admit you’re wrong,” he goes on. “Making mistakes is how you move forward in life. But I hope I never have to buy another apartment by myself. But maybe if I do, I’ll have a very good experience and write about it. I’m due a bit of luck!”

David Lebovitz’s latest book, L’Appart: The Delights and Disasters of Making My Paris Home, was published by Crown New York in November 2017. Purchase the book on Amazon below: 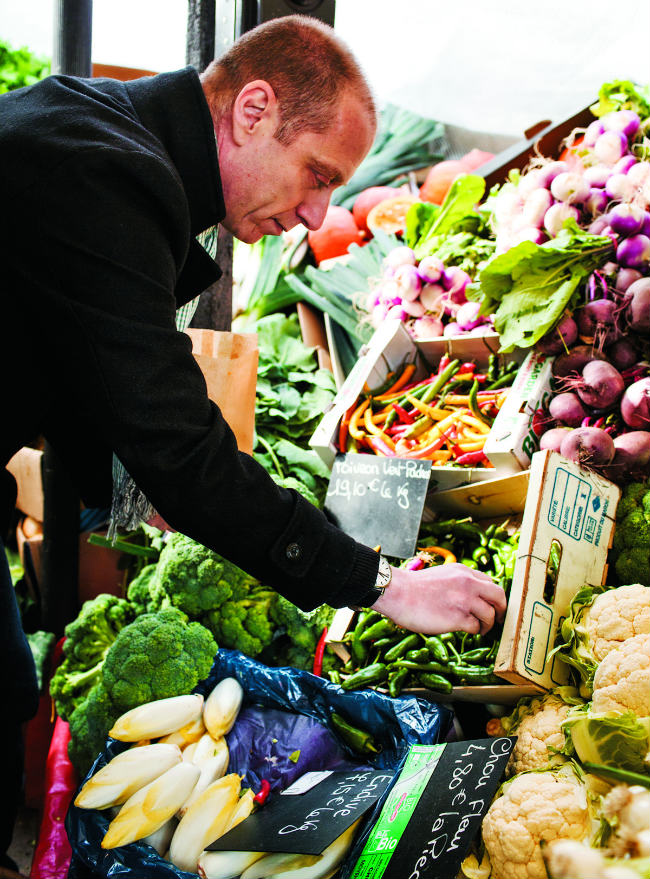