Exclusive Interview with Isabelle Huppert, Ahead of Sade Readings in London 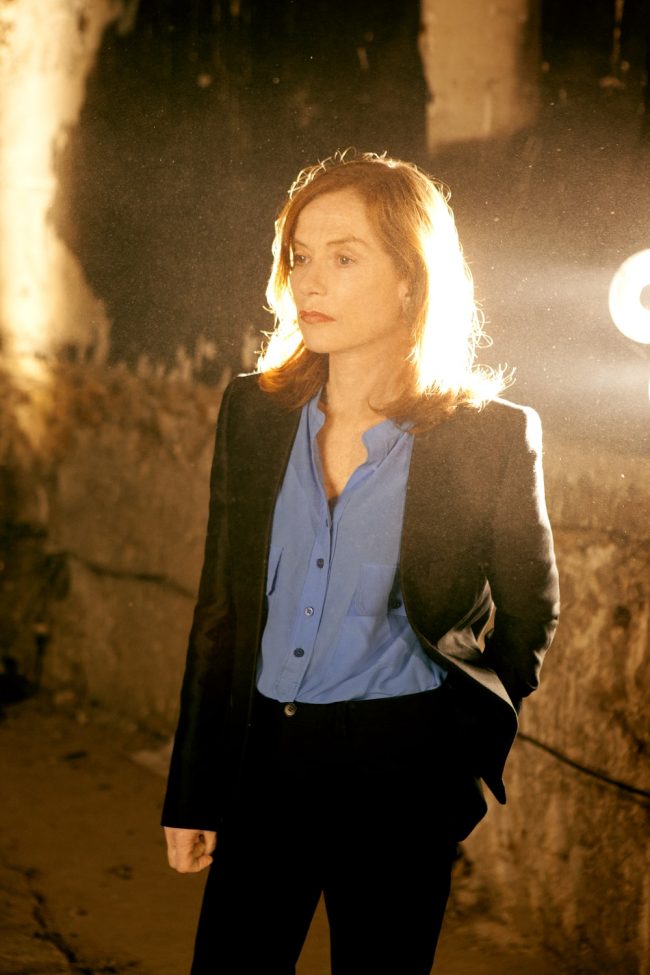 Never one to shirk controversy, Golden-Globe winner and grande dame of French cinema, Isabelle Huppert, is poised to titillate London audiences with a risqué reading of two of the Marquis de Sade’s most scandalous novels.

In ‘Isabelle Huppert reads Sade: Juliette and Justine, the Vice and the Virtue’, she will chart the diverging fates of Justine, a paragon of virtue whose moral existence leads to infamy, despair and relentless abuse and her unscrupulous sister, Juliette, whose reprehensible lifestyle and louche ways bring her ultimate happiness and contentment.

Ahead of her hotly-anticipated performance of the Father of Sadism’s choicest yarn on June 9 at the Southbank Centre’s Queen Elizabeth Hall, we caught up with the self-assured and dauntless actress.

Marion Sauvebois: Why Sade? It is a rather daring and surprising choice for a British audience?

Isabelle Huppert: Yes! Raphaël Enthoven, the writer who adapted the piece talked to me about this, and with the producer we thought it was a wonderful idea, to draw a parallel between two of Sade’s characters, Justine and Juliette and to do it as a two-character piece. It’s very interesting to confront the two books. They’re also very theatrical because you’ve got two very opposite characters who express their views about life. One, Justine is a true believer, she has faith and the other, Juliette is the complete opposite. She is individualistic, she has a very different philosophy about life. It’s very exciting intellectually and also, hopefully, theatrically, to do two characters on stage. It’s not exactly a theatre performance but you have to make it a performance, even within the limits of the exercise.

The reading is in the original French with English subtitles, yet you’re fluent in English and have performed many times in English on stage and on film. Did you consider reading the text in translation?

Sade’s texts deal with and revel in perversity, violence and very controversial topics. These are themes found in a lot of your films, more recently Elle, directed by Paul Verhoeven, which follows a woman who is viciously beaten and raped in her Paris home and embarks on a rather ambiguous and masochistic ‘affair’ with her attacker.

Doing Sade doesn’t necessarily mean I’m drawn to this sort of thing. Sade was a great writer and you enjoy the style and writing above everything. I don’t go too much into the psychology or emotions and feelings; even though as I did it started to understand Justine. In the first place you tend to make fun of this poor Justine; she is so naïve and she is so candid and she finds herself in these horrible situations. You tend to mock her somehow. Juliette is her opposite; she is a pure intellectual, she reasons, she is more theoretical.

But the more I did it the more I came to finally think that Justine deserves to be defended in a way. She is very touching. She is spiritual. She believes and keeps believing and that faith helps her.

You certainly seem drawn to ambivalent and decidedly complex roles?

Yes. It allows you to go deeper and deeper in the exploration and expression of human ambiguities and contradictions. But without falling into sentimentalism. If you got too emotional or too sentimental then you’d reach a territory you really want to stay away from. In Elle, for example, there is suspicion but there is also love. It’s more an exploration of very ambiguous desire, yes, but also of vengeance. It’s a revenge story. 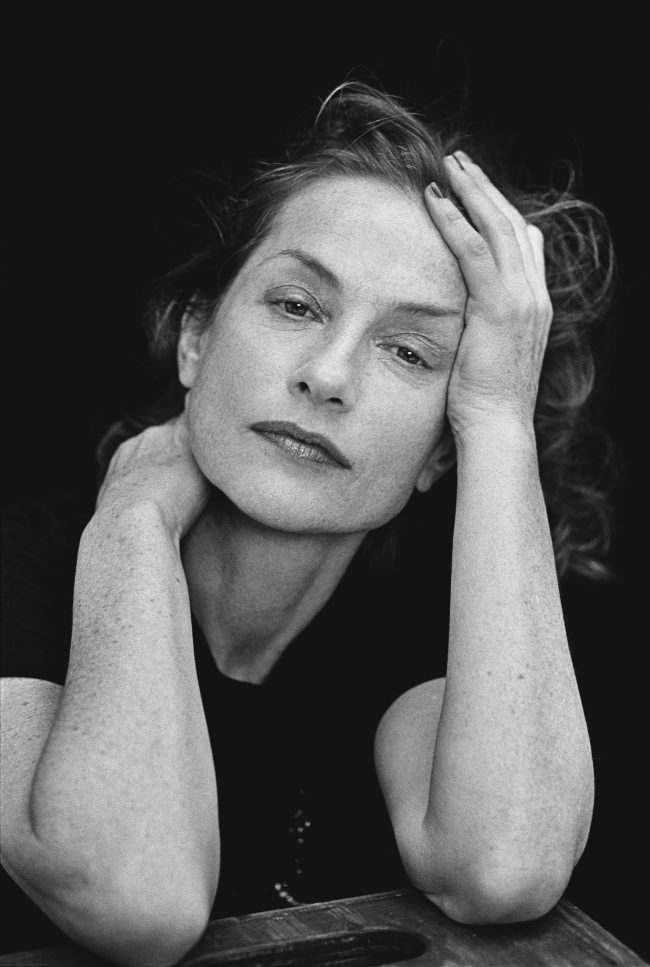 Your CV is incredibly long and broad. You’re doing a reading, you have performed and continue to perform on stage in France and abroad and you’ve totted up more than 100 movies. What initially sparks your interest in a project? Is it a particular character, the script, the director, a bit of everything?

It’s the director, of course, nothing else. The director is the key piece of the ensemble.

And then comes the subject and then comes the character. But it’s definitely the director first. In this case, with the reading, there is no director, I more or less did the staging myself, I worked on the lighting – one light for this character and that one for the other so the audience knows which is which (although I’m sure they know because I play them differently) or for this scene and this scene.

Speaking of directors, you’ve worked on four films with Michael Haneke, more recently in Happy End. What keeps drawing you back to him and his idiosyncratic universe?

First of all, he keeps coming back to me. And then I come back to him! And then he comes back to him and I come back to me. He’s a master. He’s a great filmmaker. He has a vision and this is want you want from a director. Certainly, Haneke he has a very, very strong vision. There is no compromising. He has great intelligence.

You don’t do what you’d call ‘easy’ films. Many have called you a risk-taker when it comes to choosing scripts, directors and subject matter. Would you agree?

No great movies are easy. I don’t even know what ‘easy’ means when it comes to acting. It’s just a pleasure. I enjoy each film, that’s all. Easy I don’t think so, no…

You’ve not starred in a lot of comedies, all things considered, but we hear you’re about to appear in the second series of French hit comedy show, Call My Agent, where famous actors play heightened and, often unflattering versions, of themselves. What can you tell us about the upcoming cameo?

It’s very funny and I had a lot of fun doing it. I’m halfway between a character and myself and it works. I guess that’s the case for any actor in the world. You’re you and you’re somebody else and a bit of everything.

But I did do comedies, they just don’t come out abroad as much. I love comedy. Even in Haneke, you can find a lot of comedy in his movies, like in Happy End. It’s always possible to find comedy in drama, and a bit of drama in comedy. I think it’s harder to make good comedies than dramas.

Have you ever considered writing a play, a film or directing?

Oh no! Writing a play no… Sometimes I think about it. But it’s a lot of work and it takes a lot of energy and I’m perfectly happy as an actress. Sometimes I feel I’m a little bit more than an actress in the sense that I can create my own territories. I make characters my own as much as possible. I’m not saying I’m taking the place of the director, I would never say that. But I feel I’m contributing to their world. Maybe one day, I don’t know…

You were awarded the Golden Globe for Best Actress for Elle and received an Oscar nomination for your performance. Did you ever imagine it would be possible, as a French actress?

No… Well, anything is possible. I had never really thought about it.

For sure, I could never have imagined this wonderful journey for Elle. It started at Cannes and we got nothing but then, when the movie reached the US, it got the Gotham Award, the Golden Globe and then the Academy Award nomination, and numerous others. It was quite amazing and unexpected.

I always believed in the film and supported the film completely, but it was a difficult film and a potentially controversial film.

The movie and its controversial premise, a woman embroiled in an unsettling sexual cat-and-mouse with her aggressor, is far removed from films usually in contention for the Oscars and Golden Globes; especially at a time when political correctness reigns supreme. Were you worried the film would not speak to the American public?

Oh, I don’t know. It’s a very smart film and in a way profoundly honest. That deep insight spoke to people. If the movie had been done in an emotional or sentimental way, then it would have become edgy. And it’s not that at all. It’s authentic and that authenticity spoke to people.

Is there a particular movie, director or role that stands out for you in your career so far?

All of them. But particularly that film with Verhoeven.

What are you working on at the moment?

I’m doing a film with Anne Fontaine, a contemporary version of Snow White, called White as Snow, and I’m playing the stepmother – the bad one.

You have a soft spot for unlikeable, cold and misunderstood characters, don’t you?

In this one, we tried to make the stepmother as likeable as possible actually. I don’t think my characters are cold. I think they are quite vulnerable most of the time. That’s what draws me to these characters, I think.

Isabelle Huppert will perform at the Southbank Centre’s Queen Elizabeth Hall on Saturday, June 9 at 7.30pm. To book go to www.southbankcentre.co.uk

Previous Article Restaurants in Paris: Comice in the 16th Arrondissement
Next Article Market Day in L’Isle sur la Sorgue: The Stuff Center of the World