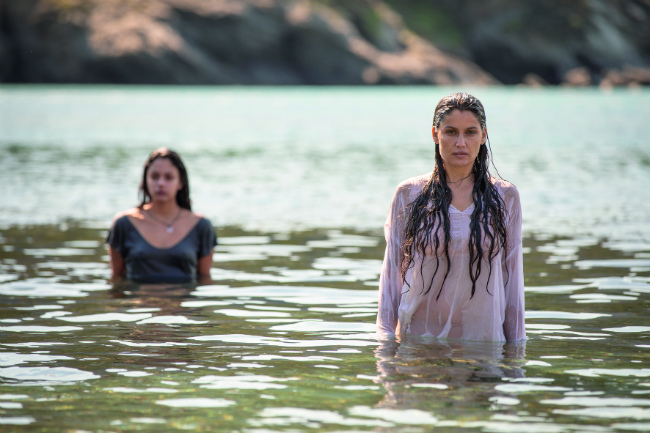 Former Victoria’s Secret Angel and muse to the likes of Jean Paul Gaultier and Karl Lagerfeld, Laetitia Casta has successfully made the transition from modelling to cinema. Lise Pedersen meets the surprisingly grounded actress, currently immersed in her latest project…

She is not as tall as I had expected, but utterly gorgeous, wearing barely any make-up, a black sweater and a casual trouser-suit. I had arrived early for the interview, and bumped into Laetitia Casta and her publicist as I made my way to the chalet where we were supposed to meet in the French mountain resort of Les Arcs. She smiles as I introduce myself and stretches out her hand in welcome.

We settle into the couch and she fixes me with her green eyes. Disarmingly honest and thoughtful, Casta opens up about her latest project: Une Île, a TV series shot for ARTE in which she plays a mermaid. “But it’s not the kind of mermaid you would imagine,” she confides, with a mischievous smile. “She’s a murderer. She leaves the ocean and goes back to land to kill humans by hypnotising them and absorbing their souls. She can see inside their souls, and she kills all those who have destroyed the Earth and the sea.

“It’s a very modern, ecological fable about the power of women and female instinct. It goes back to the myth of Lilith, the very first woman created by God for Adam,” she explains. “She was very wise and strong. And when God sent her to Adam, she refused. She said, ‘Man is too small’, and preferred the heavens. There is a very powerful, female animality about her. I really enjoyed playing that role.”

The series was shot on the island of Corsica, where Casta spent all her summers as a child.

“It took me back to my roots. Corsica is where I learned to swim. The landscape there is very dramatic, it’s such a beautiful, wild place. You immediately feel connected to nature and to your instincts – which was perfect for the role.”

Trusting her instincts is probably what has allowed her to succeed in not just one, but two very high-profile careers. Articulate and grounded, Casta exudes composure and self-confidence. It has not always been this way, she assures me. “The great advantage of growing older is that you gain in confidence. We all have weaknesses, we all get hurt, but with time you heal and become stronger. When I was 15, I didn’t always grasp people’s intentions. It was only later that the true meaning of what they were saying came to me…”

‘Discovered’ on the beaches of Corsica at the age of 15, Casta went on to become one of the most sought-after supermodels of the 1990s and a muse for the likes of Jean Paul Gaultier, Yves Saint Laurent and Karl Lagerfeld. Over the past two decades, though, she has established a reputation as a serious and talented actress, both on stage and screen.

In her latest feature film, A Faithful Man – directed, co-written by and starring her husband, Louis Garrel – Casta plays Marianne, a beautiful, confident woman prepared to take the risk of losing the man she loves in order to win him back. 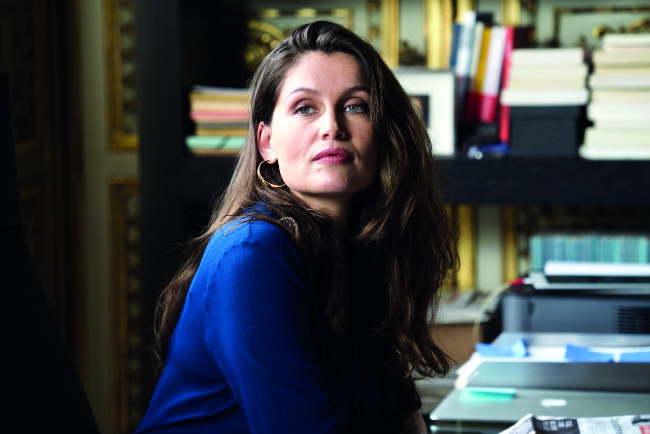 The role can’t have been hard to inhabit, I surmise, but what was it like shooting with her other half? “At first I didn’t want to, I was afraid it might harm our relationship. I’ve never mixed my private life with work. Acting is a very intimate process.”

So what was it that made her change her mind and take the plunge? “Well, Marianne is just a role in a movie. I liked the story and I thought, ‘If I don’t take this opportunity to get to know him at this precise time and place, it would be a real shame’. So, eventually, I decided to take the risk.”

And it paid off, judging by the critical and public reaction. Infused with a Nouvelle Vague feel, caustic, self-deprecating humour, and a soupçon of the absurd, the film tells the story of Marianne and Abel. The pair meet, then separate and get together again a decade later, only to find their relationship threatened by the young and seductive Eve, played
by Lily-Rose Depp.

It is a typical French ménage à trois with a tight script (it runs at just 1h15min) that prompts several laugh-out-loud moments. It must have been fun to make, I venture. “To tell you the truth, it wasn’t. I really took the job very seriously. You have to in order to make people laugh. You know, when you try to be comical and you overplay it, it’s not funny.”

Casta’s character, Marianne, literally thrusts Abel into Eve’s arms – a pretty radical move. “She does it because he’s unable to choose, he’s afraid,” she goes on. “So she forces him to face his fears, she wants their relationship to be built on solid ground,” she pauses. “Sure,” she concedes with a smile, “her way of doing things is quite unusual. But I think the moment you take the risk of losing someone, it’s a sign that you truly love them.” And in the end, she admits: “I was wrong to be afraid because it’s a beautiful experience to make a film with the one you love. You get to rediscover each other.”

Taking the step, like Garrel, of moving behind the camera, is something Casta has experienced, too. In 2016, her short film, En Moi, was screened at the closing ceremony of the Critics’ Week in Cannes. Starring French actor and filmmaker Yvan Attal, it follows a movie director struggling with solitude and the fear of failure. The film drew attention, thanks to a particular scene featuring women walking naked from the waist down. Why was it important for her to make it?

“Maybe because of what I have experienced [throughout my career], being under constant scrutiny… it wasn’t always positive. I wanted to talk about that. Dealing with that has
been challenging and interesting,” she says, without any ill-feeling in her voice. “I’ve come
to understand that it’s not always up to me how others see me, and it’s important to keep a distance. What matters is to be able to put your experiences to good use. So making this film gave me a chance to express what’s relevant for me, as a woman.” 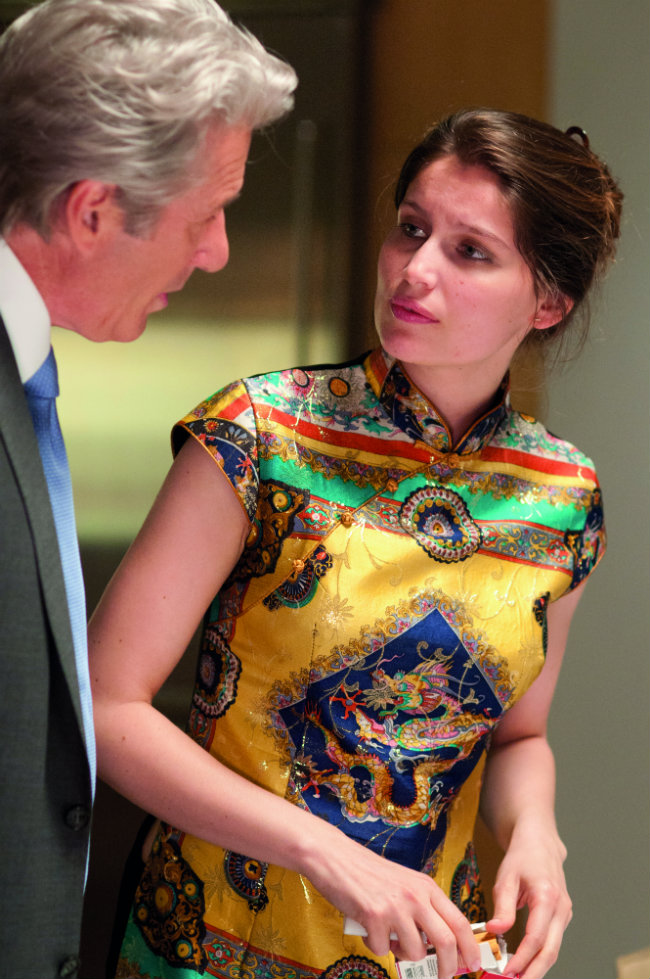 Casta has distanced herself from #BalanceTonPorc (which translates as ‘Denounce Your Pig’), France’s answer to the #MeToo movement. Hers is a nuanced approach. Her soft-spoken elegance, however, belies a steely self-assurance. Far from the objectified woman she might have embodied on stage or on film, she leaves no doubt as to where she stands on feminism.

“Things are starting to change. What I want is for women to be victorious. They shouldn’t be afraid of claiming their place at work and being successful. When I was playing Marianne, I was thinking, ‘I hope this character will be an inspiration for other women’.

“There’s a lot of talk nowadays about desire and about the way that men view women. Of course, we can’t tolerate any lack of respect – that kind of behaviour must be denounced and punished by law – but I’m not comfortable when things get censored. It doesn’t have
to be ‘us’ versus ‘them’, we can work together,” she places her hands flat, with the tips of her fingers touching. “I believe very strongly in femininity and masculinity, it’s about finding the balance. When people talk about desire, they’re usually referring to male desire. We don’t hear enough about women’s desire… It’s as if desire was a purely masculine attribute.” 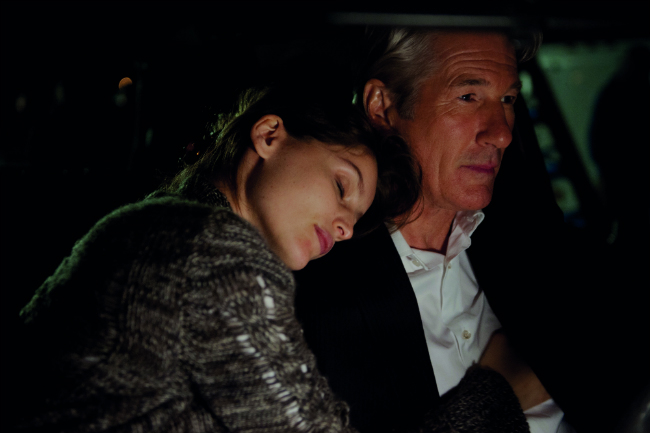 MARRIAGE MADE IN HEAVEN

Casta’s choice of roles reflects her feelings. A couple of years ago, she impressed audiences with her performance in French director Safy Nebbou’s stage adaptation of Ingmar Bergman’s Scenes from a Marriage. “I read it and wondered, ‘Will I be able to play that?’. But then I realised it was an opportunity to experience acting in a way I had never done before, so I felt lucky to be given this chance.

“The hardest part was that I stood with my back to the audience in the opening scene. That was quite scary. It makes you feel very vulnerable, and that was what the director wanted. It was quite a powerful experience.” One she would want to repeat? “I love the theatre, but there are no rm plans right now.”

The same goes for a potential return to Hollywood. “I shot a film in the US with Richard Gere, Arbitrage. It was an indie movie, so it wasn’t that different to the ones I usually do in France. But making films over there is quite complicated. Things take a long time, you have to be really committed. And there’s the language, too. I don’t have that kind of ambition.

“What I’m really interested in is European cinema. English actors, in particular, have an extraordinary ability to get in and out of character. They are like children in a way, their technique is amazing. In France, acting is very theoretical – it’s like the head is separated from the body… I love to connect the two.”

I’m curious to know more. Those green eyes twinkle. Casta says she’s working on a screenplay with a friend, but can’t tell me anything more or it might bring her bad luck. Fair enough. Her intuition has served her well this far.

Une Île is broadcast on ARTE.

Previous Article 12 Villages to Visit in the Rhône Valley
Next Article Last Chance: Catch these Museum Exhibitions in Paris