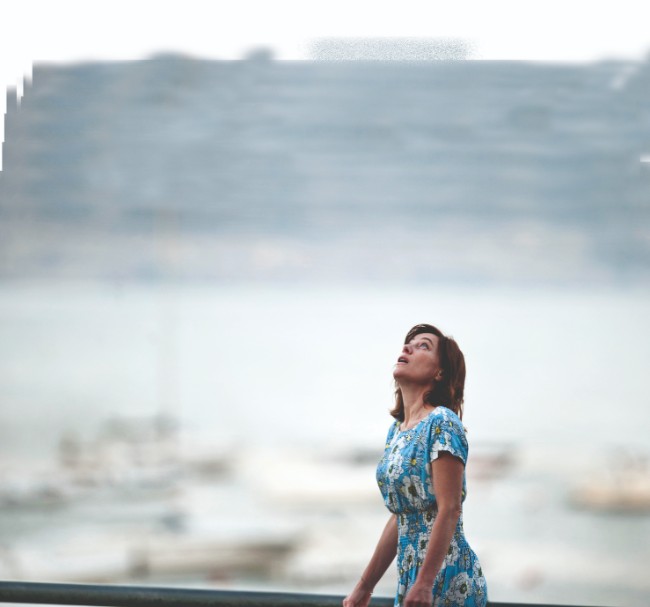 With more than 80 films to her name – including six she co-wrote and directed – it’s no wonder Valeria Bruni Tedeschi is a household name both in France and her native Italy. She tells Lise Pedersen what inspires her to make her humorous, but honest, movies…

Valeria Bruni Tedeschi is late for our interview. She is pacing up and down the hotel lobby, engaged in an animated discussion on her phone. She reminds me of a character straight out of one of her films. As we settle down and the conversation starts flowing, that is exactly how she turns out to be: disarmingly neurotic, straightforward and funny.

“Humour helps you live more freely,” she says. “And if you are very precise and honest in your work, people will be interested in your characters because they will be able to relate to them.”

She is speaking both as the actress who has played in more than 80 films over a career spanning some three decades, and the director of six films – some of which she stars in too. Several are semi- autobiographical and feature people she is close to.

Her latest, The Summer House (Les Estivants, 2018), is a light, tender and intelligent portrayal of the complexity of human relations. Set on the French Riviera, it stars Italian A-listers Valeria Golino and Riccardo Scamarcio and French legend Pierre Arditi. Bruni Tedeschi plays the lead role, a filmmaker called Anna, who is struggling to come to terms with a break-up and to get funding for her next project. Her mother, pianist Marisa Borini, and the daughter she adopted with actor-director Louis Garrel, Oumy, both star in the film. So why do her movies often tell her own story? 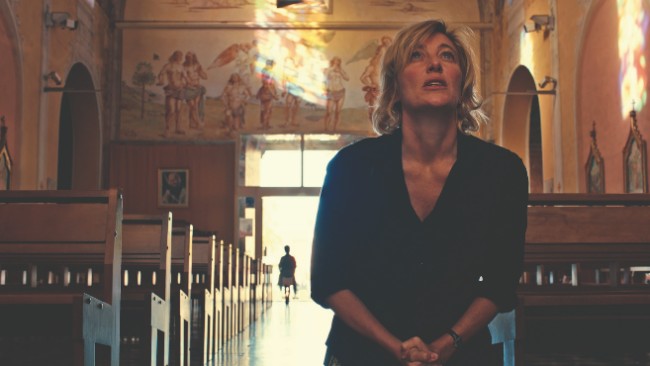 In Les Estivants, Bruni Tedeschi plays a filmmaker struggling to come to terms with a break-up. © GUY FERRANDIS – SBS PRODUCTIONS

THE MEANING OF LIFE

“It helps me breathe better, it’s my way of putting oxygen into my life. Giving meaning to senseless things like separation, death, desertion and sorrow… I’ve always got this lump in my throat, it’s been there most of my life. The anxiety is always there, and my job is to try and turn that into something joyful.

“It’s true that it makes things easier to have my family and friends play in my films: they understand exactly what I expect of them. But they are also great actors.”

And what makes a good director? “It’s someone who loves her actors. It doesn’t mean you can’t mishandle your characters. You can create a despicable character – I love being horrible, like a child who just says what she thinks without any filter – but a director must always love her actors. An actor is always right, and it’s up to the director to make sure he or she flourishes.”

And does she apply this to herself? She smiles, and recounts how, when she was shooting her first film It’s Easier for a Camel... (Il est plus facile pour un chameau…, 2003), she had to give herself a pep-talk.

“It’s not that easy because I don’t like myself that much. So I had to sit myself down on a chair one evening and talk to myself. I told myself, ‘I like you as an actress, I really like your work, keep it up. See you tomorrow morning’.” She laughs with characteristic self-mockery, running her hand through her tousled blonde hair.

Her third film Un château en Italie was the only entry from a female director at Cannes in 2013. © Guy Ferrandis – SBS Productions

“But it was really serious,” she protests, smiling. “I often talk to myself when I’m working. As Pirandello [the great Italian dramatist] once said, ‘we are one and a hundred thousand people, and sometimes we have to tell one of these people to go for a walk because they are not welcome on a lm set’.”

We are chatting in the Salon Rouge of the Manoir Savoie in Les Arcs, where Bruni Tedeschi has been invited to give a masterclass on the place of women in cinema, as part of the resort’s annual lm festival. Her third film, A Castle in Italy (Un château en Italie, 2013), was the sole entry from a female director at the 2013 Cannes competition and The Summer House premièred in Venice in 2018. She speaks openly about her journey from acting to writing and directing her own films. What’s her take on gender parity and quotas?

“It’s complicated. Personally, I would have been ashamed if my film [The Summer House] had been screened in Venice just because I am a woman. But we do need to change habits and initiate small revolutions so that the world sees that women are as talented as men.

“The gender disparity is really obvious when it comes to acting. There is a huge difference between men and women: a man who ages is okay – he’s even seen as attractive, but a woman who grows older is rejected. This is reflected in society, which turns away from older women. It’s blatant, and I know this because it’s something I suffer from.”

So what kind of world does she hope her daughter will grow up in? “My daughter is adopted, she’s from Senegal. And even though she’s still young and doesn’t necessarily want to become an actress, I know that it’s much harder for black actresses to find work. I have an actress friend who’s from Senegal, and she really struggles to get work. It’s completely crazy: black women are still given stereotypical ‘black women’s roles’.” This, she says, is where she hopes to make a difference as a filmmaker.

“What I can do is give black women or North-African women non-stereotypical roles in my movies. Take the example of my daughter: she is obviously adopted, but [in The Summer House] we don’t make a big deal out of it because that’s not the issue. Hers is the role of a little girl whose parents are separating. However, the fact that she’s adopted addresses something that is core to the film: the sense of abandonment. And that’s what the film is about, a woman who is abandoned by her lover.” 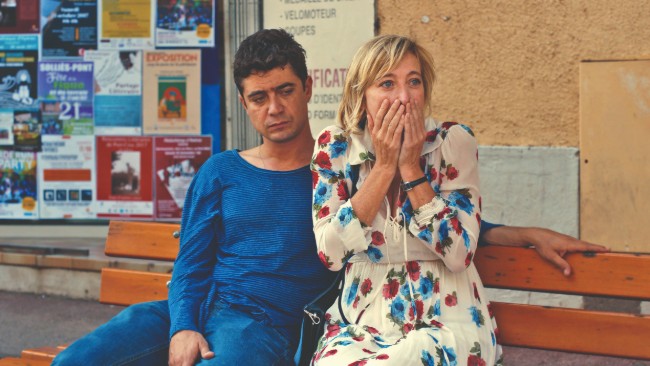 A TALE OF TWO WORLDS

The film unfolds in two parallel worlds: on the one hand, there is Anna and her wealthy family and friends; and on the other, the household staff, whose claims for decent pay and working conditions are received with indifference by their rich employers. The two worlds meet when a scriptwriter friend of Anna’s – played by Bruni Tedeschi’s long-time co-writer Noémie Lvovsky – comes to visit and falls for the handsome young cook. It’s a love story doomed from the start. What is she trying to say?

“That we are all in the same boat: we’re all lonely and we’re all going to die, we all have dreams and desires, but we cannot ignore our background or where we come from – even when it comes to love. You can be imprisoned by your social status. The character of the scriptwriter wants to be free to love the cook, but in the end, she’s afraid because she’s locked up inside her social class.”

Class differences are a recurrent theme in Bruni Tedeschi’s films. The granddaughter of an Italian tycoon and daughter of an opera composer and a pianist, Bruni Tedeschi and her sister, Carla Bruni – the wife of former president Nicolas Sarkozy – moved to France with their parents in the 1970s amid fears they might be kidnapped by the Red Brigades. The guilt she feels about being privileged is both a burden and an opportunity to look reality in the face, she explains. “I am wealthy. I come from the bourgeoisie, that is my story, and that is also why we had to leave [Italy] – because of the Red Brigades. There’s something about that which makes me very uncomfortable. When I get to play characters that come from a different social background, I feel more free. I take great pleasure in those roles.” 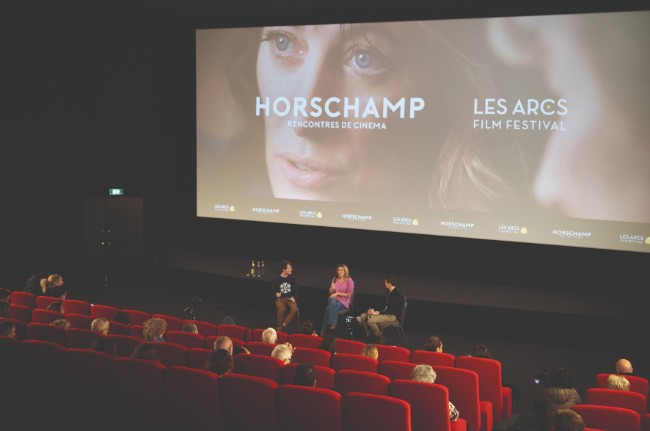 Bruni Tedeschi delivered a masterclass on the place of women in cinema – a topic that is very close to her heart, naturally – at the Les Arcs Film Festival in December 2018. Photo: Lise Pedersen

It’s a fine line between self-deprecation and self-pity, one not to be overstepped according to Lvovsky. “Noémie always tells me, ‘It’s okay to be sad, but you must beware of pathos’.”

A huge admirer of Chekhov, Bruni Tedeschi has a definite penchant for social satire. Her films are often infused with comédie à l’italienne – not surprising, considering how strong her ties are with her native Italy, where she is a household name and winner of four David di Donatello Best Actress Awards, the Italian equivalent of the Oscars.

While cinema has brought Bruni Tedeschi success, her first love remains the theatre. She still regularly takes to the stage. Not a day goes by, she says, when she doesn’t remember the man with whom it all started: the great French theatre, opera and film director Patrice Chéreau.

“Making films is a way for me to summon the people I miss, to cross that terrible border of death. That’s the magic of cinema. Patrice is very much with me, he was the first person who saw me the way I needed to be seen. He was both demanding and kind. He is an inspiration: the precision of his work, his love of actors – it’s like a beautiful piece of music.”

Her voice falters; the lump is back. There is an undeniable sense of urgency about it. Does she see that as a problem? “This need to achieve things under pressure is a strength in my work, but it’s a weakness in life. It’s not very elegant, makes me look a bit clumsy… Self-composure is so much more attractive, isn’t it?”

Her bright blue eyes are dancing. Her heart, as always, is on her sleeve. No one, either side of the Alps, would want it any other way.

Previous Article Where to Stay and Eat in the Eure Department
Next Article Book Review: The Little(r) Museums of Paris by Emma Jacobs