Romain Duris: “This Job Terrifies Me When Things Get Too Comfortable” 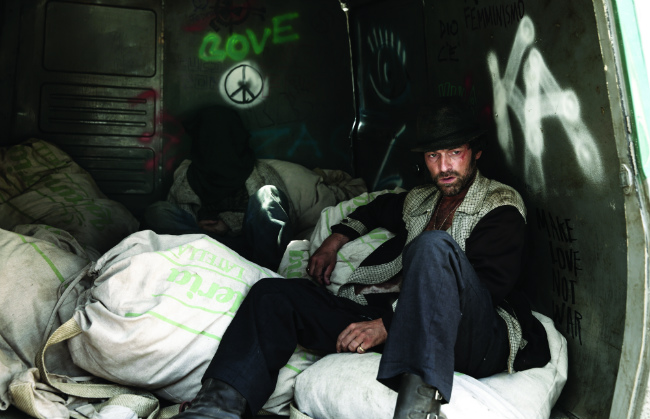 “I like change– this job terrifies me when things get too comfortable, so as soon as there’s action, I’m in.” That’s the story of Romain Duris’s life. Spotted by a casting director on the streets of Paris at the age of 19, he has gone on to make more than 50 films with some of the best directors around. But before acting came into his life quite by accident, he was destined for a career as a cartoonist.

“When I made my first film (Le péril jeune, 1994), I was in an art school in Paris, and I wanted to make a living as an illustrator,” he explains. “I was aiming for children’s books, because that gives you the freedom to work in many different ways.” So what happened?

“Cinema took over completely, it’s very time-consuming. Being an actor is such a crazy job, it took on more importance than I had expected. And the work kept coming. I thought it would stop but I met new directors, who played a very important part in my life… But drawing has always been there, ever since I was a child, more or less intensely.”

We are sitting comfortably in a cosy chalet in Les Arcs where Duris is guest of honour at the 10th edition of the film festival that draws some of the biggest names in European cinema to the French ski resort every year.

With his trademark tousled hair, wearing a casual blazer, battered jeans and a charming grin, at 44, Duris still exudes the same energy and charisma that made him a household name of French cinema some two decades ago. 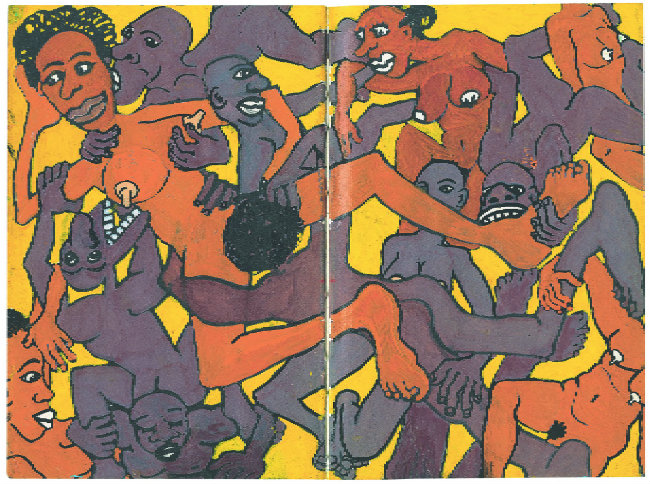 What he is less known for is his artwork. After keeping it confined to the private sphere for a long time, he decided to make it public a couple of years ago, when he released a collection of his drawings, Pulp. “The time was right to publish a book of stuff I’ve done over the years,” he says. 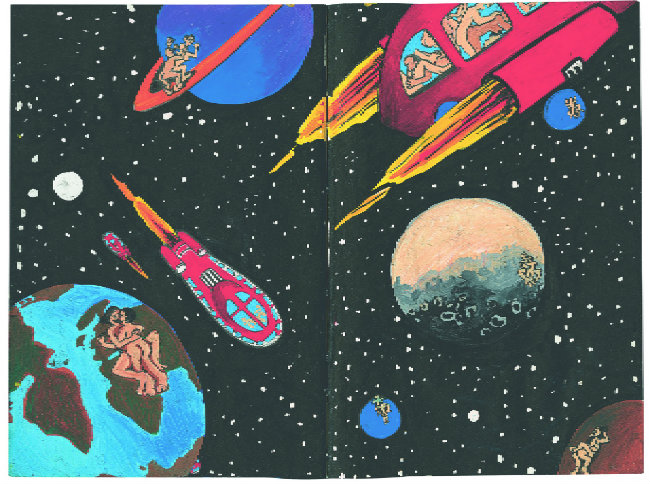 “I draw characters, I draw bodies… I draw feelings. I think it’s funny, a bit unconventional, it doesn’t take itself seriously,” he stops to think. “It’s difficult to define,” he grins.

But don’t be fooled: behind his easy-going exterior is what the French call un faux calme. Duris is an actor who takes his work extremely seriously. This is reflected in his need to continually step outside of his comfort zone. Never one to settle, he enjoys nothing more than a new challenge. 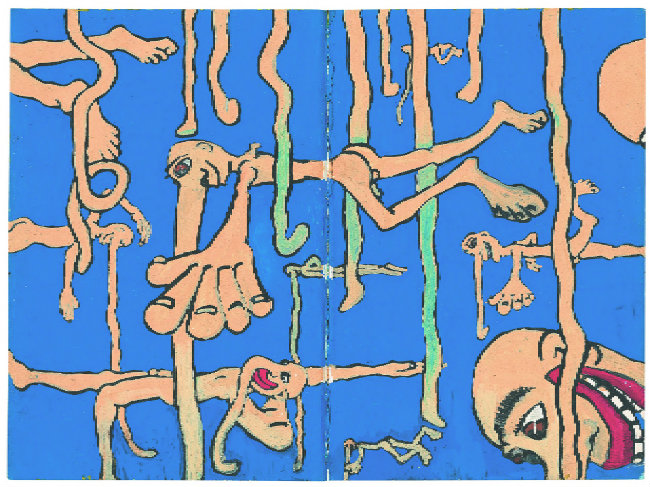 The public recently got a fresh taste of this with his latest project, Vernon Subutex, a TV adaptation by Canal+ of the critically-acclaimed book series of the same name by Virginie Despentes, whose first volume was shortlisted for the 2018 Man Booker International Prize. A searing, dark-humoured satire of contemporary French society, it tells the story of a successful record store owner who becomes a casualty of the digital revolution and finds himself down and out on the streets of Paris.

What drew him to this radical character? “His life trajectory is incredible,” says Duris. “He owns a record shop, music is always with him. He watches the world around him, without judging. He’s one of these people who are both fragile and precious because they are not made to live within our society, where everything moves so fast, where you’ve got to be smart and shrewd…” He pauses, clearly touched by the loneliness of his character.

“But his rhythm is different. Trying to understand and inhabit this character, who ends up on the streets, utterly destitute, like a modern-day Jesus Christ… I think it’s amazing to play such a role.”

While he is very private about his personal life, Duris never holds back once the camera is rolling. His unique combination of rage and vulnerability has seduced directors both at home and abroad. His collaborations with Cédric Klapisch, with whom he made the popular L’auberge espagnole trilogy, put him on the map in France, but it was his work with Jacques Audiard in the 2005 De battre mon coeur s’est arrêté (The Beat That My Heart Skipped) that earned him international acclaim. His compelling turn as a dark, psychotically nervous and insecure conman sealed his reputation as a protean performer. 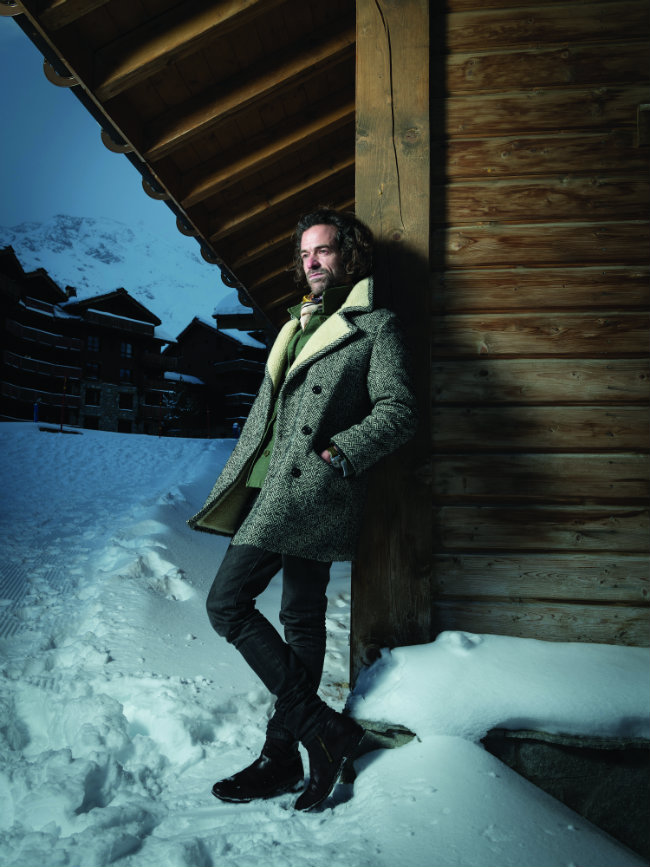 Duris loves nothing more than to tread outside his comfort zone, no matter how small the part. © ALEXANDRA FLEURANTIN / OLIVER MONGE

More recently, Duris chose, once again, to step into unknown territory by shooting with Belgium’s Guillaume Senez, whose directing style is based on improvisation. In Senez’s second film, Nos Batailles (Our Struggles), Duris stars as a trade union rep who spends too much time at work and comes home one day to find his wife has left.

“There’s a film that haunts me, it’s Kramer vs. Kramer with Dustin Hoffman. He plays this overworked guy, who has to take care of his kid. He’s a single father whose wife has left him, he’s going through a really rough time. You feel for him. There’s a lot in common with Our Struggles,” he explains.

“It was also Guillaume Senez’s filmmaking that appealed to me. I really enjoyed his first film, Keeper. He told me how he uses improvisation to make his movies: there’s no dialogue in his screenplays. But every scene is described very precisely. I was really curious to see how it would work, whether we would find the words and get it right.”

Premièred at the Cannes Film Festival in the Semaine de la Critique sidebar, Our Struggles was a hit both with the public and critics, who hailed its authenticity. A sensitive, intimate portrait of a family in crisis, the film deals with the personal without sliding into pathos. 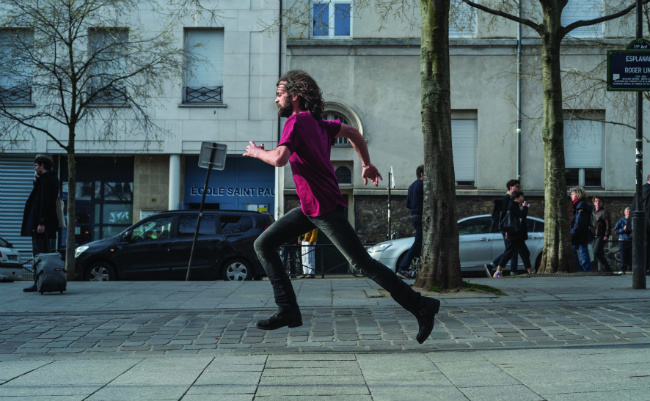 In his TV series, Vernon Subutex, Duris is set to play a former record store owner who drifts into homelessness. © Canal+

“That’s right, and there was also a risk of the dialogue overlapping
– it could have been really messy! But everyone played along, we were all very aware of each other. That’s very important, because if a film is too naturalistic it can be embarrassing to watch. Here, it’s all very much under control, and the kids were terrific. They don’t have the same barriers as us,” he enthuses.

Duris’s need to transcend barriers is a common theme throughout our conversation. Recently, he jumped on a plane to Quebec after French-Canadian director Maxime Giroux asked him to appear in his latest film, La Grande Noirceur.

“I got this phone call from the other side of the planet to shoot a couple of scenes. I loved his first film, Felix and Meira, it’s beautiful. I told him what I thought of the scenes, and he made some changes. I thought, ‘He really wants this’, so I just went for it.

“The whole team was really cool. I’d never played that kind of character before: he’s cruel, a real baddie… It was a great experience.” His eyes are shining. “I like cinema when it’s a bit mad like that: you have to be totally available, there and then, for a few scenes with people you have never met before – it’s pretty magical.” 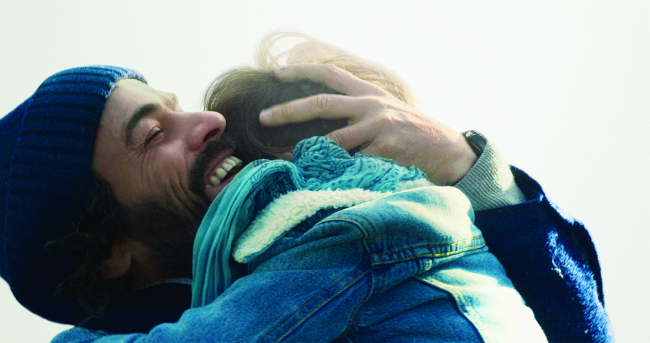 IN AT THE DEEP END

That’s exactly what he did when he went for the role of mafia kidnapper Cinquanta in Ridley Scott’s 2017 film All the Money in the World. Set in Italy in 1973, it tells the story of the abduction of 16-year-old John Paul Getty III, the grandson of the American oil tycoon. Speaking English with an Italian accent, Duris is very convincing as a member of the criminal gang. “Ridley Scott had offered me a role a while back, but it didn’t happen. For this movie, he was looking for an Italian actor, so I was a bit cheeky – I put on this Italian accent for the screen tests…

“Ridley later told me he didn’t think I would take it as it wasn’t a lead role. He’s like that, he’s a very humble guy. But I told him, ‘No, I’m up for it, it’s fun’. At any rate, for me, working with Ridley wasn’t about the size of the role. He was really happy to have me on board, and I was delighted to be there.”

When I ask whether he would work with Ridley Scott again, his face lights up. “Definitely. With him or on any of his productions. He’s truly passionate about cinema, so I would definitely be up for it,” he smiles. What can we look forward to in the coming months?

“For now, I am drawing. What I need is to spend some time alone to paint and draw… time to think about a new exhibition perhaps, or another book. I’m totally into that, it fulfils me. I don’t need anything else right now.”

Previous Article Le Dernier Mot: Affair of the Heart
Next Article The Best Museums in Lorraine