A Tour of Cher 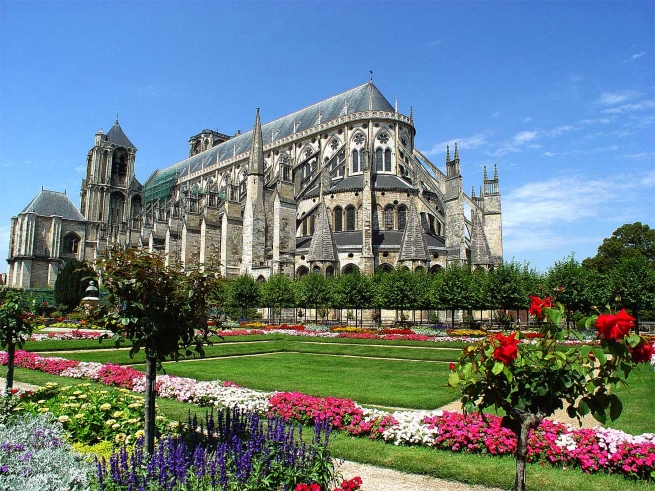 Controversy abounds in Cher, the rustic département bursting with tradition that forms half of the old province of Berry. From the age-old assertion by no fewer than three different villages that they should be acknowledged as the bona fide geographical centre of France, to the tongue-in-cheek musings of a former Le Figaro editor that ‘France is Berry with a few provinces around it’, things have been stirred up here for centuries (just ask one of the sorcerers attending the annual Wizards’ Fair at Bué). And from the medieval streets of Old Town Bourges to the vineyard patchworks of the Sancerre foothills, its people have an unerringly proud sense of regional identity.

One fact, though, should never be in dispute. This unspoiled rural utopia is the heart of France in many ways, and has enough cultural, historical and sensory temptations to go head-to-head with its better known – and more frequented (by British visitors anyway) – neighbours in the nearby Loire Valley.

The most useful starting point for an exploration of Cher is its administrative centre and transport hub, Bourges. Not only was this marshland-ringed, hilltop city a former stronghold of Julius Caesar’s Gaul and the capital of France for a few years during the Hundred Years War in the 15th century, but it was also the birthplace in 1400 of Jacques Coeur, the region’s most celebrated son. The merchant made a fortune buying and selling silk and paper from the East and ran a vast commercial empire in the Mediterranean, and his esteemed name today adorns signs for a 16-point tourist trail of Cher’s finest historical sites. Even his motto – ‘To a valiant heart, nothing is impossible’ – resonates throughout the town.

Evidence of Coeur’s wealth is best seen in the beautifully restored Palais Jacques Coeur, his former home. With its flamboyant gothic façade and smart interior, it was a forerunner of the Renaissance town mansions that eventually dominated French cities. The house also forms part of the ‘Illuminated Nights’ tour, which sees prestigious monuments come alive with light during summer evenings.

The finest building in Bourges is the one that dominates its skyline as you enter the city. The colossal Saint-Etienne Cathedral, a UNESCO World Heritage Site since 1992, was constructed in fits and starts between the 12th and 19th centuries, and is as elegant inside as it is awesome outside. It is a must-visit, if only for its splendid stained-glass windows, which depict scenes from the daily lives of the local tradesmen – tanners and bakers among them – who sponsored them, as well as its religious motifs.

If the weight of history proves too much and you need to clear your head, venture out of the city centre to the marais – the Bourges marshland – which is used as a watery allotment plot by some 1,200 farmers. Bourges is an easy-going city, and its medieval streets are perfect for a casual saunter, with a lovely relaxed atmosphere and great shopping opportunities. With one foot in the past and another tentatively stepping into the new millennium, the city is a gem.

Leave Bourges in any direction and the unspoilt countryside will soon reveal a town or village imbued with the region’s cultural history. To the northwest is Le Pays de Vierzon, a largely industrial area bordering Champagne and the Sologne. Visit Vierzon’s silk thread museum or the photography museum in nearby Graçay for a taste of the past, or simply take in the pure air and peace along one of the six hiking routes around the town.

Heading east of Bourges, through the vineyards of the Sancerrois countryside, the first apparition of Sancerre, a town of just 1,800 inhabitants perched upon a hill, with vine-filled fields stretching as far as the eye can see on the horizon, is nothing short of breathtaking. For wine-loving British visitors to these parts, the town will always evoke fond memories of fine whites. Yet although wines from this pretty town are always the initial draw for visitors, and roaming the Quartier Vigneron in search of a bottle or two from one of the many ‘dégustation et ventes’ outlets is essential, three sites should not be missed: the 17th-century Notre Dame Church, the Saint-Jean Belfry and the solitary tower that is all that remains of the town’s original fortress. And for a stunning view out over the River Loire – Sancerre sits at the halfway point, namely 310 miles, of the river’s length – and the neighbouring town of Saint-Satur, go to the town’s best vantage point at Esplanade Porte-César.

Sancerre is just one of five appellation wines produced in northern Cher, the others being Menetou-Salon, Quincy, Reuilly and Coteaux du Giennois. Finding some great food to accompany such outstanding wine is not difficult. Many meat and fish dishes in Cher are accompanied by a delicious cream or wine sauce, and local produce, as always in France, features heavily on menus. But perhaps the region’s greatest gift to the French table is its goat’s cheese.

In the foothills of Sancerre lies the village of Chavignol, an unassuming backwater where the goat is king, and where the expert production of Crottin de Chavignol dominates proceedings. Taken with white wine or red, the cheese’s creamy bitterness is unrivalled, and visitors are advised to cram as much as they can into their suitcases before heading home.

Another fine trip out of Bourges is to head to Cher’s southern tip, to visit two of the sites on the Route Jacques Coeur. Firstly, Noirlac Abbey – almost hidden from view in a valley of the River Cher – is a stunningly well-restored Cistercian monastery. It is open to the public for tours and music concerts, and the austerity endured by its former inhabitants echoes eerily around the empty, white-stone halls.

By complete contrast, the Château d’Ainay-le-Vieil could hardly be more sumptuous or reveal a more glittering history. The castle, known as Petit Carcassonne because of its round defensive towers, is a spectacular marriage of medieval practicality and ornate Renaissance style, and has been the family home of the Bigny dynasty for over 500 years. Artefacts from the Napoleonic era – the family was linked with Napoléon himself, Colbert and other big names of the time – adorn the awesome main rooms, while the old rose garden is an inspiration to any gardener. In terms of historical gravitas and design, this castle should be viewed on a par with the Loire’s finest.

No trip to southern Cher is complete without a photo opportunity at the geographical centre of France. The problem, however, is that three villages have cause to claim the prize. Vesdun, Bruère-Allichamps and Saulzais-le-Potier all have a case, although Bruère has history and mathematics on its side.

Passing through the verdant countryside of Pays Berry Saint-Amandois, you should stop off at its capital, the market town of Saint-Amand-Montrond. In addition to being one of the biggest printing centres in France, the town has one more glittering boast. Jewellery, specifically ‘hollow’ gold jewellery, has been manufactured by artisans here for decades. The town today produces an astonishing four tons a year, and visitors can learn everything they need to know about the history of gold mining (both in France and around the world) and jewellery making at the impressive glass pyramid-housed La Cité de l’Or museum.

There is plenty more on offer in Cher, including more beautiful châteaux and historic monuments, such as Château Meillant and Dun-sur-Auron. In addition, there are many “secret gardens of Berry”, like the 12th-century priory near Châtelet and the aromatic plant garden at the Manzay Priory in Limieux. It is impossible here to offer more than a fleeting glimpse of the département’s full riches, whether gastronomic, cultural and historic, that will be the reward of an adventurous sojourn off the beaten track. Suffice to say that, while the Loire Valley seems to get all the glory and the visitors when it comes to big-name wines and castles, spend a few days in Cher and you will be telling a different story.

Ryanair flies from Stansted to Tours, the nearest airport to Bourges.

From Paris, take the SNCF service from Gare d’Austerlitz to Bourges.

For a taste of the wealthy lifestyle enjoyed by Bourges’s most famous merchant son, visit his home, now the Palais Jacques Coeur in the medieval Old Town.

For details of visits to Saint-Etienne Cathedral and an Illuminated Nights of Bourges tour, contact the Tourist Office.

To buy Sancerre wine direct from a cave, go to Bernard Reverdy et Fils in Chadoux.

The wonderfully restored Cistercian Noirlac Abbey (Bruère-Allichamps) can be toured.

For more information about Cher and its sights, contact the Cher Tourist Board.

Cher enjoys a climate similar to that of the Loire Valley, with avergage summer temperatures of around 22ºC and winter averages of 2ºC.

Previous Article Competition: A Week of French and Culture Class with Alliance Française de Normandie
Next Article The Nord Département