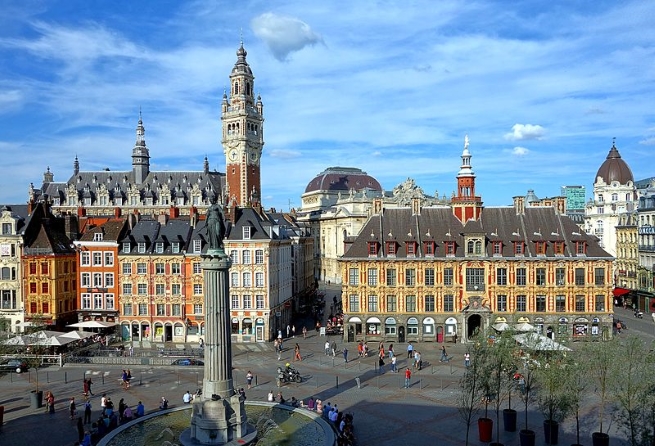 With the Eurostar speeding through the Kent countryside at 186 miles per hour, weekenders can reach Lille in 100 minutes flat from Waterloo. This means, of course, that they have more time for the usual urban indulgences of shopping, eating, drinking and marvelling at fine old buildings. And in this capital of the Nord département, there are plenty of the above to keep the credit card busy and the senses satisfied.

But the visual and culinary appeal of Lille – a sprawling metropolis that serves as the area’s transport hub and main cultural focal point – are just two aspects of a deeply traditional broader area that deserve better understanding. Look beneath the often harsh, plain surface of this Flemish region that extends inland from Dunkerque, or Dunkirk as it is known across the Channel, flanked by Belgium to the north and Pas-de-Calais to the south, and you learn about a hard-working people firmly in touch with their unique roots at the crossroads of ancient and modern Europe.

First, though, to Lille, which in 2004 was European City of Culture. More Flemish than French in architecture and gastronomy, and, thanks to its 100,000 students, lively both day and night, the city is a joy to explore. An absolute must for first-time visitors is a guided mini-bus tour, which leaves from the tourist office on the hour. Not only does this jolly anecdote-filled trip present in brief the main sites of the Old Town and developments like the TGV station and the giant Euralille shopping centre, but it also gives a sense of perspective to allow further exploration by foot.

The symbolic heart of Lille is a huge square with three names. It is known variously as La Grande Place, Place de la Déesse (after the goddess statue in its middle) and Place du Général de Gaulle (the former President was born in the city; you can visit his old family home on Rue de la Princesse). Among its many impressive buildings, a stand-out is the Vieille Bourse, the old stock exchange. This ornately façaded block of privately owned apartments houses a quadrangle where booksellers, florists and chess-playing locals congregate. As a cute snapshot of quaintness and charm, it is hard to beat, while also worthy of a photo is the golden statue-studded headquarters of the region’s newspaper, La Voix du Nord.

Slip down Rue des Manneliers to the side of the Bourse and you are met on Place du Théâtre by the striking sight of the huge Opéra building and the Chamber of Commerce, complete with its huge bell tower. After seeing this, there are many other historic buildings and monuments to discover in the Old Town, easily enough to fill a day’s visit. And, to satisfy the artistically minded, there is the Fine Arts Museum on Place de la République, which can be accessed by the hyper-efficient automatic métro system. This fine building houses important works by Rubens and Goya.

For some post-sightseeing, pre-shopping rest and refreshment, take your pick of café terrasses on the Grande Place or splash out on a meal at one of the stylish restaurants that line the Rue de Gand at the other end of the Old Town. Then it’s time to hit the shops. The Old Town has all the big names – Hermès, Printemps and Benetton among others – while Euralille is like a modern shopping mecca, the ultimate ‘mall’.

After ‘doing Lille’, many would not think of going further afield. Indeed, on the surface of things, the Nord does not appear to be in line for first prize at the next ‘Most Beautiful Département’ competition. Yet it has plenty to sing about. Although its now defunct traditional industries, like mining and textiles, have left their mark in the form of slag heaps and unemployment, there are some hidden gems to unearth. To find them, you have two choices: either head north towards the coast or south towards Picardy. Travelling north of Lille towards Dunkerque, within minutes you are in the heart of the Flanders countryside, characterised geographically by the three mountains (the Monts de Flandre) that interrupt an otherwise flat, rather dreary landscape given to endless potato fields and chicory crops.

Cassel is a town perched upon the highest of these hills, and represents the epitome of Flanders’s unique heritage. As well as having commanding views towards Belgium, it offers estaminets (great value small eateries where traditional wooden games are played against a background of folk music, and where only local produce is served, usually with frites) to please the heart and windmills to please the eyes. And, like most other towns and villages in Flanders, it also has giants. Big wooden giants, to be exact, which are hidden away in secret before being paraded around town annually – amid a wild, often boozy, party atmosphere – in celebration of an heroic or memorable local figure.

Lille folk go to Cassel and its leafy surrounds to relax at weekends, and can be seen having a quiet beer in a ‘Lion de Flandre’ bar. You can spot these black lions – the old symbol of Flanders – all over town. In fact, beer is big news in these parts, and the countryside is dotted with micro-breweries that produce strong beers from their own home-grown hops. Of note is the family-run Beck brewery near Bailleul, open to the public for tours and tastings. Their heady brews accompany favourite local dishes like andouillettes (rich chitterling sausages) and carbonnade (beef simmered slowly in beer). While in the area, traditionalists should also visit the school for lacemakers.

Nord has a short stretch of coastline – known as the Flanders-Opal Coast – which is dominated by the sprawling port of Dunkerque. Unremarkable in appearance, the town is famed for its museums about the Second World War (during which 80 percent of its buildings were destroyed) and its spirited three-day carnival, which takes place at the beginning of Lent. More visually and historically appealing are the nearby fortified towns Gravelines and Bergues. These coastal reaches have a variety of landscapes, from wide beaches popular with landsurfers and sand-yachters to flora- and fauna-filled dunes marked with walking trails, and the area is perfect for a couple of days’ break with children, and the ideal entry point from the UK for those travelling by ferry.

South of Lille there’s even more to take in in terms of history and culture. The area is known as Hainaut, and has as its capital Cambrai, which became part of France in 1677 under Louis XIV, and is best known as the place where, in 1917, tanks were used in combat for the first time. For the sake of authenticity, the BBC filmed their recent war programme The Trenches nearby. Cambrai is classed a ‘Town of Art and History’, and while its main square was largely destroyed by the two World Wars, its aesthetic appeal today rests with the huge cathedral, the wood-fronted tourist office and the excellent Fine Arts Museum, housed in a lovely hôtel particulier. Violet and mint-flavoured sweets, known as bêtises, are a good present to buy here.

Art lovers will know that the artist Matisse was born in Nord, and his home town, Le Cateau Cambrésis, in the south of Hainaut, displays many of his lesser works in a purpose-built museum, a shining diamond in an otherwise grey town. The mining industry was once a major employer in this poor area, and a poignant reminder of its importance to local communities can be found at the Centre Historique Minier in Lewarde. In a massive former working coalface, ex-miners offer impassioned tours and give insights into the efforts of local men to make a simple living in horrendous conditions. Of all the museums that set out to shed light on the Nord’s past – and there are plenty of them – this is the one that does the best job of conveying a human perspective in an imaginative way.

Near Lewarde is Douai, a lovely bourgeois town that boasts perhaps the most famous belfry in France, and through which runs the River Scarpe. Every Saturday morning a master carillon (bell) ringer expertly plays 62 bells – the largest of which weighs five tons – from an organ-like keyboard. The sound is light and beautiful, and can be experienced up close by those fit enough to trek up to the belfry. If you prefer a bit less exertion, head to the Chartreuse Museum, whose high spot is the light-drenched statue hall. All along the roadsides in Hainaut, farmers arrange their produce for passing trade, with the most common sight being bulky bunches of garlic, tinged brown after being smoked. This local speciality is produced in abundance in the village of Arleux.

The final piece of the Nord jigsaw, however, is the Avesnois, an area that couldn’t be more different to the somewhat uninspiring landscapes of the rest of the département. With its lush greenery, forests, lakes and small rivers, the area is perfect for family activities such as trekking and cycling, while ancient towns like Le Quesnoy and Avesnes-sur-Helpe offer ample hospitality and charm.

This beautifully tranquil corner of rural Nord provides further evidence that, while Lille gets most of the plaudits (and the visitors), the famous city is merely the tip of a rather impressive iceberg. Let’s hope some of the limelight diffuses over the wider area.

Thanks to the new high-speed line in Kent, the quickest way to get to Lille is by Eurostar from London Waterloo or Ashford, Kent.

For a useful introduction to the départment capital’s best architectural and cultural sites, as well as a handy way to acquaint yourself with the city’s layout, a Lille city tour is a must.

Mining may now be obsolete in Nord, but the Centre Historique Minier in Lewarde provides a wonderful insight into the harsh conditions once endured by miners. With working machinery, collections of lamps and ex-miners providing guided tours, it is unmissable.
Nord is blessed with a plethora of fantastic museums. One of the best is the Musée Départemental Matisse in the artist’s home town, Le Cateau-Cambrésis. Although there are few major works on display, it provides an intimate chronology of the man’s work, from early sketches to the church robes he painted late in life.

For more information about Nord and its sights, contact the Nord Tourist Board.

Nord has more or less the same climate as the southeast of England. The North Atlantic drift protects the region from excessive cold. The green southern area, the Avesnois, is the wettest part of the département.

Previous Article A Tour of Cher
Next Article Ardèche guide