A Whole Lot of Love in South-West France

Justin Postlethwaite experiences the first flush of romance in a lesser-known corner of the Southern Lot.

Rarely, and without fanfare or prior warning, a village, town, museum, restaurant or view suddenly catapults itself into my all-time Top 10 of favourite places to be in France. Over the years, epiphanies have been visited upon me in places as diverse as Albi (cathedral), Noirmoutier (beach) and, perhaps most inexplicably, Plougastel, Brittany (er, the strawberry museum). The latest coup de foudre struck me on a sultry afternoon in late summer, and the location was Figeac, a small-sized market town that serves as sub-prefecture of the Lot department in Occitanie.

There is always a surprise element to new-found love and so it was in Figeac – yes, I know the Lot has plenty of well-known attractions, with some serious big guns including Rocamadour, Cahors and Saint-Cirq-Lapopie (there are six Plus Beaux Villages in the department) – bona fide tourist magnets all. But my latest crush, an under-the-radar wonder of ambience and architecture, deserves the same attention. The town is the central point of my exploratory tour of the lesser-trodden Célé valley, whose river twists from its source at an altitude of 713 metres over in Cantal (Auvergne) – at the village of Calvinet, to be precise – westwards to join the Lot at Bouziès, near Saint-Cirq-Lapopie.

You know a destination takes it tourism duties seriously when its office de tourisme is housed in one of the town’s most attractive buildings – and so it is in Figeac. The medieval façade of the impressive Hôtel de la Monnaie is one of the town’s best preserved (it dates from the middle of the 13th century), with abundant carved decorations and beautiful arches on the ground floor. Drop in, like me, to pick up a ‘Keys to Figeac’ brochure and a map for navigating your way to the town’s key spots. 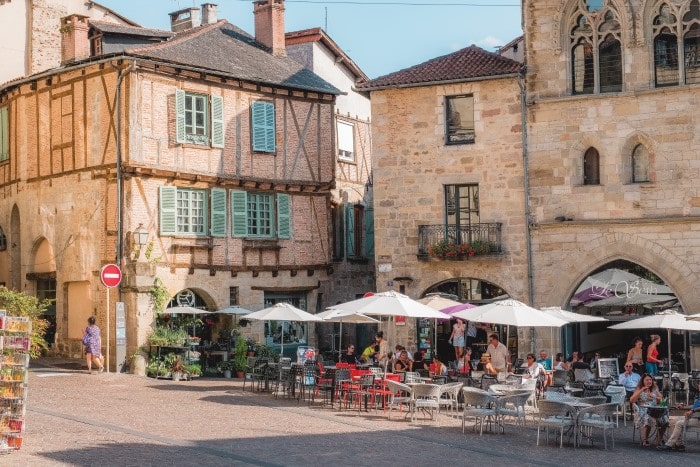 The art of living in Figeac. © Teddy Verneuil/ Lot Tourisme

Other unmissable ancient hôtels to gaze upon include Hôtel d’Auglanat (rue Balène) with its elegant porch and carvings; Palais Balène (also on rue Balène), a 16th-century palace located in the south of the city on the banks of the Célé; and Hôtel Galiot de Genouillac (rue Roquefort), built in the Renaissance style for Galiot de Genouillac, Master of Artillery to King François I and bailiff of the historic Quercy region. More about this fellow later.

Don’t miss either The Commandery of the Templars of Figeac, where in the 13th century, pilgrims were accommodated, fed and protected. This historic monument truly takes you back in time (kids will love the dressy-up element and knights) and is a haven of peace – check out its courtyard with bistro, chapel, knights’ room, commander’s suite, and tower with great views out over the town. Another architectural gem beloved of visitors and locals alike is the café terrace-lined Place Champollion, the perfect spot for a cooling drink on a sweltering day. Here you will also find the sturdy, imposing Champollion Museum, birthplace of Egyptian hieroglyphic decipherer Jean-François Champollion, born here in 1790.

The collection recounts the history of writing and its social function over 5,300 years, beginning with the first clay tablets all the way through to writing in the digital age. And, of course, the scholar’s own life is also presented in some style. In the courtyard alongside (Place des Écritures), you’ll be wowed by the immense slab of black granite, a reproduction Rosetta Stone – on which Champollion presented his innovative research in 1822. Just off Place Champollion is the gorgeous little street Rue Émile Zola, chock-a-block with intriguing edifices, one of which now houses the splendid Hotel Mercure Viguier du Roy Figeac.

Figeac is a bustling town, packed with great boutiques, artisan shops (such as knife-maker Chassint Coutellerie d’Art), brocantes and, of course, markets. Head for the covered market on Place Carnot, and Saturday’s sprawling array of producteurs presenting all manner of delectable goodies, from duck rillettes to goat’s cheese, and juicily fresh melons to Quercy wine. Stocking up on picnic treats is a great tactic – stow away these provisions for an escapade beyond the town walls, as you head out into the verdant tranquillity of the Célé valley… 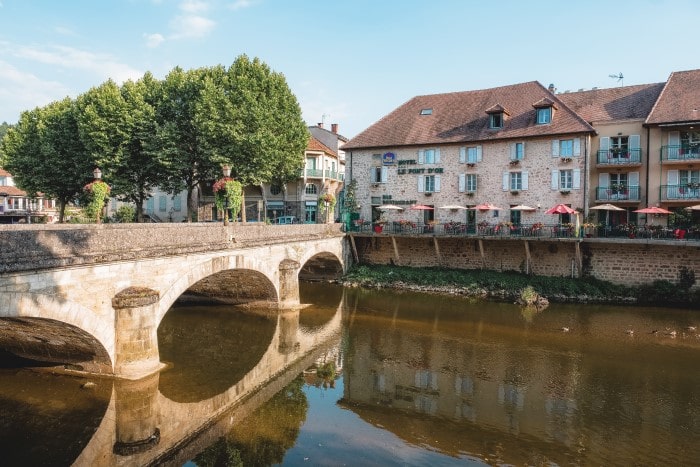 You will welcome your packed lunch should you choose to explore the valley by foot (or bike!) – the GR651 walking route winds along the river, rises up above the cliffs and includes a good number of discoveries (plan your whole route or cherry-pick sections at www.tourism-figeac.com/walk-cele-valley). Of course, if time is a factor then touring by car allows more planned stop-offs at historic villages. 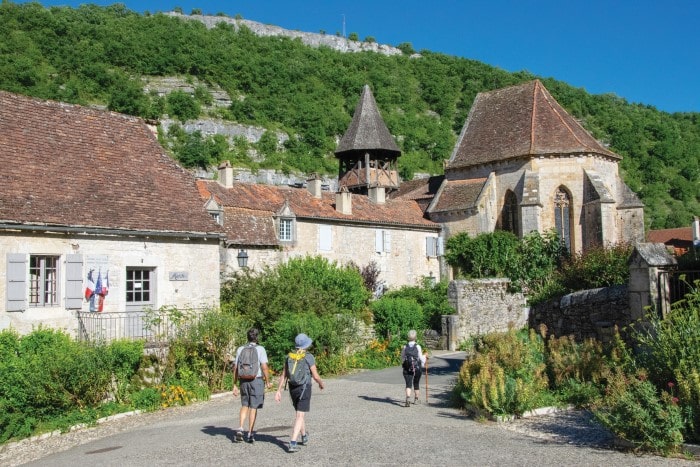 Among the incontournables west of Figeac in the Célé Valley is Espagnac-Saint-Eulalie, built around an old Augustinian priory founded in the 12th century. Its location is so picture-perfect and peaceful that it became known as ‘Paradise Valley’. You can explore the village and the priory on a guided tour, where you will learn about its Saint-Jacques de Compostelle ties (spot the scallop shells – it remains a well-loved pilgrim destination). A little further west is Marcilhac-sur-Célé, nestled in a cirque surrounded by cliffs. Tour the 12th-century Benedictine abbey and stroll around the surrounding countryside, spotting stone shepherds’ shelters (called caselles) featuring some immaculate dry stone walling. Yet further west is Sauliac-sur-Célé, with its idyllic swimming and canoeing spot, Château de Geniez and the Cuzals Eco-Museum (great for kids).

Ten minutes further west still, at Cabrerets, embedded in the pale rockface is the Château du Diable, or the Château des Anglais. It was said, probably falsely yet the myth stuck, to have been a hideout for looters during the Hundred Years’ War. Troglodyte houses and the famed Pech Merle prehistoric caves complete the spectacular olde-worlde scene.

My own preferred village is Capdenac-le-Haut, just 4km from Figeac and designated a Plus Beau Village in 2010. A real step-back-in-time marvel perched 110m above the mighty River Lot, which runs parallel to the Célé, this former oppidum (large fortified Iron Age settlement) is the spot where Caesar’s men overcame the last Gaulois resistance fighters. With its keep, ramparts, church and delightful main square, it’s a true delight. Don’t forget to climb up to the medieval ‘Five Senses’ garden with its authentically ancient plant species and sublime viewpoint. Then stroll the tiny, higgledy-piggledly streets that ooze Middle Ages charm. I snaffled some superb, locally made beer in a tiny épicerie, but for those requiring hearty lunchtime sustenance, the Hôtel-Restaurant Le Relais de la Tour is great value.

One more village well worth visiting while in and around Figeac is Assier, a 20-minute drive away on the way to Rocamadour. Sleepy to say the least, the village is where the aforementioned super-wealthy Galiot de Genouillac (François I’s Commander-in-Chief) completed, in 1535, an exceptional château in the Renaissance style, which was emerging at that time in the Loire Valley.

Eschewing the notion that “self-praise is no praise”, he decorated it with symbols and sculptures that honoured his own heroic deeds and victories. Its vast quadrilateral plan, of which the entrance wing remains, boasts a spectacular portal with porticoes, loggias and pediments. The nearby Saint-Pierre church is no less self-aggrandising, with its frieze containing 75 sculpted panels showcasing his exploits.

With that, I complete my first Célé valley sojourn, certain that a return trip is a must – not only to keep the flame lit with my new squeeze, Figeac, but also to dive much deeper into this corner of Lot’s riveting natural wonders and historical intrigue. 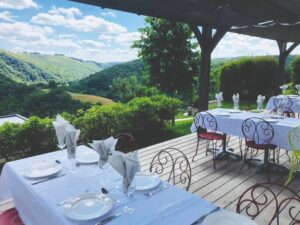 After a busy day touring in and around Figeac, there is a piece of Lot paradise in a bucolic spot just northwest of Figeac at Linac, which provides extreme calm for those keen on rural repose. La Ferme du Cayla, run by Anglo-French couple James and Olivia, is a gorgeous clutch of high-end holiday cottages where guests enjoy either full-board or self-catering stays.

Equally great for small or large groups of friends or family (coming with kids or grandchildren is great), you literally won’t lift a finger during your stay – which can be as long or short as you like, throughout the year. A crèche, Baby Club and Kids Club, plus many bespoke activities and facilities, are on hand to keep the little ones amused, leaving grown-ups to enjoy some relaxation and pampering – including pools (indoors and outdoors), spa centre (massages) and yoga classes. Kick back with a glass of Cahors rouge on the terrace before dinner, then enjoy excellent cuisine prepared by the chef.

For more information and to book, please visit www.lafermeducayla.com

Previous Article An Interiors Odyssey: The Work of Jacques Grange
Next Article The Delights of Uzès in the South of France