The Delights of Uzès in the South of France 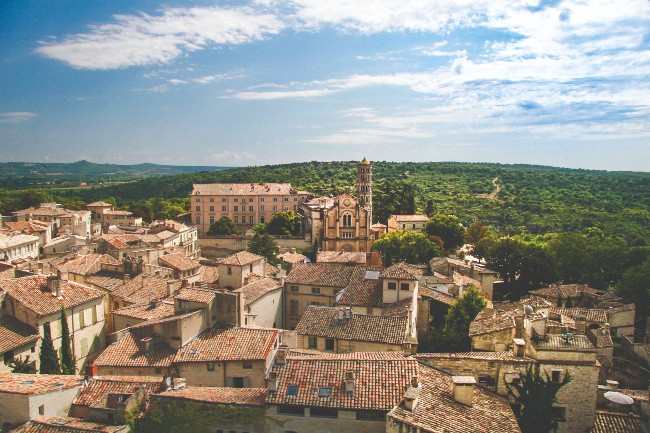 Jennifer Ladonne shines a light on this historic town, where a charming, quieter side of southern France is to be found.

Tucked away in the Gard département is a gem of a town and the perfect base for discovering a region full of splendours. “But have you been to Uzès?” is a refrain I’d heard many times, but besotted with Provence, Marseille, the Drôme and pretty much all of the region east of the Rhône and south of Valence, I didn’t give it much thought. Until, on a quick trip from Avignon to the Pont du Gard, I noticed Uzès, a dot on the map just a few kilometres from the majestic Roman bridge. Why not stop by?

Late one October afternoon, circling Uzès on a ring road strongly reminiscent of ever-so-chic Saint-Rémy-de-Provence, an apparition appeared that I could swear was the tower of Pisa in miniature. I veered off the road into a parking lot that abutted what turned out to be the Cathedral of Uzès. A fortunate landing: besides finding a parking spot just steps from the medieval town, the view of the cathedral’s 12th-century Fenestrelle Tower, Uzès’s charming tiled roofs and the splendid Eure Valley stretching before me was magical.

Barely a soul and not a single car in sight, I wound my way up cobbled streets that opened onto charming squares where, but for some elegant boutiques and art galleries, it felt as though time had stopped. Closed to traffic, the medieval centre is a joy to explore on foot (which you can easily do in an afternoon). And everything, from the elegant façades to the paving stones, is hewn from creamy white limestone, a congruity that gives Uzès its remarkable harmony and grace. Coming upon the wide Place aux Herbes, the town’s main market square, I couldn’t resist settling down at a café terrace tucked into a corner under lofty plane trees on that warm October day to savour my good fortune – and plan my return.

Eighteen months and a pandemic later, I was back in Uzès on a sunny morning in early November. This time, armed with maps, reservations, and a list of things to do, I parked my rental car at the cathedral, knowing that, with days ahead of me, I could enjoy all that Uzès and its surroundings had to offer. And that’s a lot.

Uzès is in the Gard département, just across the Rhône River from the heart of Provence, about 20 miles from Avignon and 16 miles from Nîmes, home of France’s best-preserved Roman amphitheatre. Though very much the south of France – and every bit as comely – Uzès has somehow evaded the bling that’s overtaken so many of its Provençal counterparts. Just an hour from Arles and the Camargue’s sandy beaches to the south, and an hour from the beautiful, wild Cévennes to the north, Uzès is both the perfect destination and an excellent base for discovery.

Though a first-time visit may feel revelatory, Uzès is hardly a secret: well-to-do Parisians, artists and aesthetes discovered the town in the 1970s, less than a decade after the Duchess of Uzès persuaded her friend André Malraux (the novelist and Minister of Culture who first codified the French laws for historic preservation) that the medieval town – then in ruins – was a great investment. Reimagined as a ville d’art et d’histoire, today Uzès’s greatest appeal is its authenticity. Compared with so many Provençal towns, its almost total lack of tourist traps and commercialism is a rarity.

“We’re on the unfashionable side of the Rhône, so life just carries on here all year round. It’s not a tourist town, it’s a living town,” said Gwilym Cox, one of my charming hosts at L’Albiousse, a five-room boutique hotel in a gorgeously restored 16th-century town house, which Cox and his partner, Alexis van Deinse, opened 10 years ago. “You’ve heard of slow food – here it’s slow life, but a real life. And the social life here is better than in Paris… It’s not somewhere you go to see things, we just want you to come to make an experience of it,” emphasised Cox. And it’s true that if lounging around on a sunny terrace or under a graceful colonnade, seeking out local delicacies at the farmers’ market, sipping an apéro under towering plane trees, sleeping in a ravishing hotel or tucking into a gourmet meal is your thing, Uzès more than fits the bill. But there’s also plenty to do and see in and around this historic town.

In Uzès’s 16th-century heyday, the Duke of Uzès was one of the most influential men in the entire kingdom. Now his imposing castle – occasionally inhabited by the 17th Duke of Uzès – is open to visitors. Besides a glimpse into a nearly 1,000-year history, visitors can enjoy a disarming peek into the private lives of French nobility through centuries of portraits and charming anecdotes about the characters who have lived here.

One of its more colourful inhabitants was beautiful Anne de Mortemart, the dashing wife of the 12th Duke of Uzès. An avid equestrienne and hunter, she was also the first woman in France to possess a driver’s licence.

Interestingly, Uzès holds a lot of firsts for women. It was here in the ninth century that Dhuoda, Duchess of Septimania, became the first woman in France to write a book, while exiled from her husband in the castle keep. Uzès also lays claim to France’s first female mayor, Jeanne Palanque, who was elected in 1945, just one year after French women won the right to vote.

Uzès’s laid-back, live-and-let-live lifestyle may be a vestige of its Protestant roots, but it’s more likely a sign of the people who have gravitated here from around the world for its beauty, serenity, gentle climate, natural bounty and, perhaps most of all, its light.

“If I chose Uzès, it was mainly for the light… even in winter when it can be cold, the light is beautiful,” said jeweller Bénédikt Aïchelé, and it’s something he knows all about. His jewellery boutique-atelier, tucked in an elegant corner just steps from L’Albiousse, features brilliant gemstones set in gold, platinum or tantalum, an inky black metal Aïchelé sets with black or white diamonds. His chic Bague d’Union ring is sought after across the whole of France after being featured in a French documentary.

Ceramicist Anna Karin Andersson, a native of Gothenburg, Sweden, moved to Paris in the 1990s for a career in fashion. But once she laid eyes on Uzès there was no turning back. “It was my paradise to move here. It’s the light that brings you to the south,” she said. Both the light and the nature surrounding the city inspire the winsome, whisper-thin porcelains she makes by hand in her chic boutique workshop at 9 Rue Port Royal.

Part of Uzès’s singularity lies in the tastefulness of its many art and ceramics galleries and high-end interiors and clothing boutiques. Though you will find some touristy shops on the outskirts, the quality here is unusually high – a rule that also applies to its restaurants.

At the town’s only Michelin-star restaurant, La Table d’Uzès at the exquisite nine-room hotel Maison d’Uzès, chef Christophe Ducros serves an elegant five-course menu which highlights local produce in deeply French dishes such as succulent wild pigeon or a superb Saint-Jacques with a tartare of girolle mushrooms, all expertly paired with wines from every region of France. For a more casual, bistronomic experience, Racines, a five-minute walk from the city centre, has my vote. Here, happy diners of every age feast on chef Axel Grousset’s masterful dishes: langoustine rolls with tangy sauce gribiche or divinely garlicky avocado mousse served over a buttery sablé and topped with a cascade of velvety crabmeat.

Gourmands will also want to taste – and stock up on – the wonderful local olive oil, nut oils, tapenades and all manner of delights at Le Moulin d’Uzès, a few minutes by car from the city centre. Foodies may also want to time their visit to Uzès carefully: aim for the third week of January, when the ‘blessing of the truffles’ kicks off the annual truffle auction (also held in church).

In terms of climate, the best time to visit Uzès is in late spring or early autumn, when temperatures are pleasant without being stifling. July and August can be uncomfortably hot, as well as being crowded with tourists, and nearby points of interest, such as the Pont du Gard, the ceramics town of Saint-Quentin-la-Poterie and Plus Beau Village Lussens, can be crowded too.