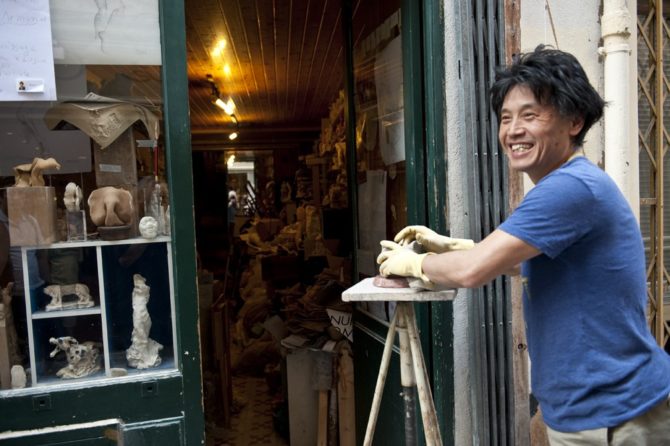 Several months ago, my husband James and I ventured ten minutes down the road from our home in the village of Biot to shop in the farmers’ market in Antibes. Experience told us to wake up early and arrive no later than nine—it was a Saturday at the end of May and high tourist season.

To our surprise, we spent our morning buying local cheese, fruit, vegetables and fish surrounded by French speakers, with just a smattering of Italian and British-accented English overheard. Equally surprising, the vendors were rounding down their prices for food and throwing in an extra piece of fruit or a few sprigs of parsley. Once customary, this had not been the norm for quite some time. It seemed a remarkable change in the atmosphere of this place we’d come to know after years of living in the area.

We were delighted to find the olive stand offering tiny squares of bread to taste their three choices of tapenade. An older couple from a farm in the Hautes-Alpes, the mountains north of Antibes, displayed a wide array of homemade vinaigrettes made with their farm’s ingredients—the flavors included wild strawberry, honey, fig and garlic. The woman offered a sample of each one, as well as a spoonful of their own olive oil, a rich green color with a smooth taste.

At a nearby stand, a vendor was working at a portable terracotta oven fueled by small sticks of wood, baking the local snack called socca, a savory, crepe-like delight made of chickpea flour and generously sprinkled with salt and freshly ground chunky pepper. While waiting for one, we looked over a stand of fresh fish on offer—some still wiggling—all caught a few hours earlier in the Mediterranean, off the Antibes coast.

We ended our shopping spree drinking coffee at a market café occupied by fishermen and other local residents who looked as if they’d been cast for a Marcel Pagnol film, many wearing blue and white striped shirts. They discussed the morning’s catch and the upcoming soccer game over small glasses of rosé. On the bar, hard-boiled eggs nested in a special rack that also included salt, pepper and toothpicks, and croissants sat invitingly in a basket nearby. We had discovered the café only a few weeks earlier, happily taking note that it was possible to duck away from the tourist fray in the market. All in all, our successful morning shopping changed our recent view of vieil Antibes, the historic old town that seems almost like a village, as overpriced and overrun. It reminded us why we loved this part of the world and this place in particular.

We’ve been visiting the perfectly positioned jewel on the sea since the mid-’90s. On the first journey, after circumnavigating the Cap d’Antibes, we entered the old town from the west, traveling along a narrow winding street up the hill, past the ironwork-covered marketplace, then down and out through an archway in the ancient stone wall that opens onto the port. Along the waterfront, a small amusement park with flashing lights invited us in, to the delight of our then nine year-old daughter. The sun was setting, its last rays striking the bastion walls of the 16th-century Fort Carré, still guarding the port that today is filled with scores of bobbing sailboat masts. The promise of a warm night played on our senses. It was love at first sight.

In fact, we loved Antibes so much we decided to move there in the winter of 2003. Perhaps the timing of our arrival prejudiced us toward a quiet, tourist-free vision of Antibes. The streets, the covered market, restaurants—everything was empty in January, February and most of March. We had the place to ourselves until Easter weekend signaled the beginning of the end, as we called it. Travelers arrived from all corners of the globe, especially Italy and northern parts of France. A few crazy northern Europeans could be seen swimming in the icy waters off Cap d’Antibes. When you live in a popular place with a booming tourist season, you learn the right and wrong times for various activities like shopping in the market, to avoid problems with parking and long lines. Dinner reservations should be made at least the night before. Basic cleaning supplies are better found in the ugly industrial zone up the hill, not at the boutiques in the old town.

Our year of living in Antibes increased our love of the place as we became familiar with local people and made new friends. We discovered a few special places to eat, sit at the beach alone, take long walks at dusk, rent a boat for the day to go exploring, buy flowers directly from the grower, and enjoyed other advantages that come with staying somewhere long enough to smell the roses.

Some of our favorite places included a comic book shop and a sculpture studio, where we made a point of stopping to admire whatever the artist Ho Lui was working on before visiting a nearby wine bar with a good local selection. We found “our” butcher, the best bakeries, organic produce growers, a well-supplied stationer and an elderly woman at the tip of Cap d’Antibes who grew perfect coral, pink, peach and red roses and sold them from her back door on Saturdays.

In 2004 we moved away, returning in December of 2008 to live in the nearby village of Biot. Soon after our arrival, we took the journey down the hill to visit our old haunts. It was the dead of winter, our favorite season, but to our chagrin we didn’t find our beloved Antibes. The comic book shop had closed and the wine bar was now a restaurant with photograph-endowed menus. There was no sign of the sculptor. Other empty shops had “For rent” signs on the door. Many of the real places, like the hardware store, had become beachwear shops. Once-tasteful souvenir stands carried tacky junk rather than the work of local artisans. The market remained much the same, although quite a few stands carried products brought in from farther afield—melons from Morocco were available in winter, rather than arriving only in season from the Provençal town of Cavaillon. Restaurants were disappointing or too expensive to frequent. The number of what we nicknamed “yahoo sports bars” had increased and the “yahoos” with them.

Despite the changes, we were still drawn to vieil Antibes on the sea, especially on Sunday when all the other fresh food markets in the area were closed, and we still enjoyed the antiques market and the many boat races. We always included Antibes in our visitors’ must-see list, with the market and the Picasso Museum in the imposing Château Grimaldi on the ramparts overlooking the sea in the oldest part of town. Sadly, other than these occasional visits, our own love affair with Antibes went on hold.

This spring, a Biot friend, the artist Marie Lou Essayie, invited us to a show of her work in a group exhibition in vieil Antibes. We parked at the harbor, walking through one of the ancient arches in the wall, looking for the community center gallery. Along the way we noticed the boules club, housed within the thick rampart wall; the door was open and members inside were playing cards and sipping pastis. Other intriguing spaces within the old wall housed artists’ studios and galleries, and people could be seen working inside.

At the community center, we ran into the sculptor Ho Lui of previous years, who was teaching a class—he hadn’t left town after all. We agreed to visit him the following week. At our friend’s show, the pizza-like onion-and-anchovy pissaladière was served with chilled rosé. People used the open windowsills to sit and enjoy the warm evening air. Marie Lou’s son Gaëtan mentioned a good place to have a drink in Antibes, a wine bar—did we know about it? He and his friends, all in their late twenties, were on their way there. We were curious, then surprised as they described the location at the western end of the covered market—it was the same café we’d stopped at for our morning coffee. They described it as a “real place”. We knew exactly what they meant. Real is when a place feels more concerned with the needs of the local population than with the short-stay visitor. Real is when the prices are fair. Real is when someone at a store or restaurant remembers that you’ve been there before, and acknowl- edges that with a friendly smile. Real is when no one hurries you.

We found other evidence of a return to the real Antibes along the busiest, most touristy street in the old town, called rue Sade, which runs between the market and the Place Nationale. A chef’s supply shop had opened up. Admittedly, it has a retail feel and isn’t anything like the size or depth of the parent store in Paris but it’s a real place to buy real supplies for cooking and boasts a knowledgeable, helpful, cheerful staff. An absinthe bar, Balade en Provence, offers live music and the chance to learn the traditional French way to drink absinthe (which is no longer illegal). At the fishmonger’s across from the market we noticed his lineup of small schoolbook-size account records for clients from the private yachts moored in the harbor, another sign that people are buying locally at fair prices and not heading up the hill to the massive and impersonal Carrefour hypermarché. Another small fish market on the harbor’s edge offers the catch of the day from the backs of the boats.

In June we found ourselves again in Antibes for the Fête de la Musique, which included a number of avant-garde performances happening all around the old town. One two-man act engaged our attention for 45 minutes with singing, flute playing, juggling and other antics. A clown dressed in red, whose side-kick pointed a large arrow down toward her from above, seemed to be drawing children to her side like the Pied Piper. She took off through the streets with dozens of children happily in tow, parents not far behind, and us. We passed an accordionist playing romantic and melancholy music in a quiet corner near the harbor. A wackily dressed band marched through town playing discordant tunes. As the sun set, we walked along the dock and watched the last rays slip from the tip of the Fort Carré. Perhaps absence had made the heart grow fonder, who can say? But, for now, we welcome the return of the real Antibes with open arms.

Picasso Museum Picasso stayed in the Château Grimaldi, on the seaside ramparts of vieil Antibes, during the autumn of 1946, producing a large body of work, part of which he donated to the museum. The permanent collection also includes Arman, Balthus, Calder, Ernst, Hartung, Modigliani and Nicolas de Staël. Splendid sea views are a bonus. Château Grimaldi, Place Mariejol, 04.92.90.54.20. website

Church of the Immaculate Conception Adjacent to the Château Grimaldi, the church in 17th-century classical style is built on the remains of a medieval cathedral. The belfry is a converted 12th-century watchtower, and inside the south transept is a beautiful 1515 altarpiece by Louis Bréa.

Place du Safranier From the marketplace a warren of narrow old streets and the flower-decked houses of the rues du Haut and Bas Castellet lead to tiny Safranier square.