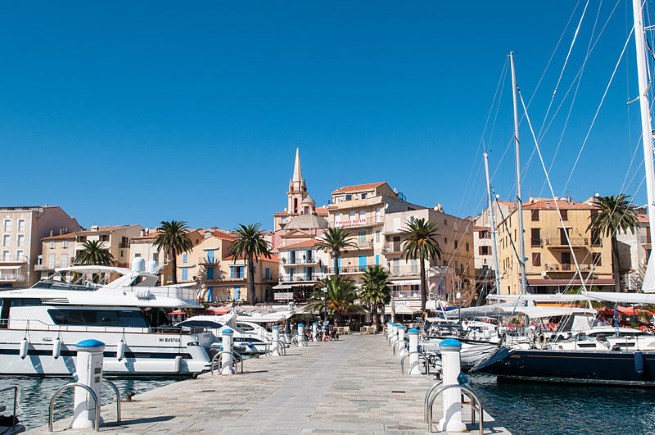 There’s a whiff of Pastis on the ocean breeze as a huddle of well-oiled older gents swaps jokes and songs. One of them, possibly an octogenarian and definitely a local ‘character’, noodles away on his accordion. Behind me a boules tournament, from which this gang of jolly soaks have presumably been eliminated at the early stages, approaches its climax without them, to much whooping and high-fiving from players and supporters alike. The nearby fruit and fish market is winding down now.

With a statue of proud 18th century Corsican patriot Pasquali Paoli watching over the square – cunningly shaded by 100-year-old plane trees – lunch service at this terrace restaurant in the social centre of Île Rousse is in full swing and my salad of local cheese, charcuterie and walnuts, is on order. I have a Pietra chestnut beer on the go, to ease the combined effects of the midday heat and a hairy journey from Bastia airport, made cross-country to this coastal town.

I have only been in Corsica for two hours. To my shame, it’s the first time I’ve ever been to this amazing place, this welcoming Mediterranean island paradise. I immediately feel as jolly as the ageing jokers on the next table and appear to have entered that increasingly rare and strange world of perfect France. Only it’s not exactly France, is it? This is a question I needed the answer to and later in the day I got my chance when I was unceremoniously kidnapped (in a good way).

After reaching my home for the week – a cosy apartment in the silent, perched village of Montemaggiore just inland from Calvi – the gregarious owners insisted that I join them for a tour of local villages. But first I am ushered in for a tour of Montemaggiore’s time-worn church, wherein I am gently urged to climb the lethal-looking, crumbled steps leading up to the ancient organ. After narrowly avoiding serious injury I am driven around local hotspots, my hosts pointing out where to buy bread and which restaurants to try or avoid.

Sensing my opportunity as we head back to the apartment, I broach the subject of Corsican nationality and the vigorous push by some islanders for independence, a movement I am vaguely aware of. Through a thick accent that seems to my ear to be super-Provençal in its burr my driver, himself a descendant of Napoleon’s ministers, says he thinks that only around 30% of Corsicans are in favour of autonomy and that most don’t consider themselves French. Whatever the statistics or intentions of nationalists may be, the next few days reveal the island to be in no small way un-French. 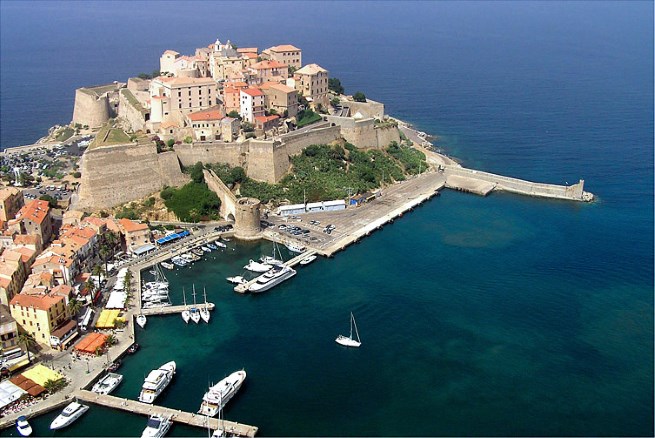 Next morning and a short drive into Calvi brings a tranquil portside coffee – what better place to watch a working town wake up? – followed by an amusing though possibly not entirely historically accurate audio-guided tour of the 15th-century citadelle which dominates the old town (Lord Nelson, who lost his right eye in battle here, would surely be horrified at his posthumous French accent!).

Calvi is the alleged birthplace of Christopher Columbus – a plaque marks the contested spot – and it’s a delightful place to explore, a mazy cavern of tiny streets and hidden crannies. Parallel to the seafront are busy streets lined with traditional restaurants, designer boutiques and local artisan produce. You will spot the Corsican Maure symbol (The head of a Moor wearing a knotted white headscarf) emblazoned on everything from lighters to towels.

Further along the pleasure port, past the tourist office, there are a couple of sub-aqua centres where die-hard divers book their next plunge at one of the many splendid sites off shore. Corsica is famed as one of Europe’s prime diving spots and of particular interest to serious plongeurs is the submerged shell of a WWII B-17 bomber just out of Calvi Bay. But for a truly spectacular descent, I’m told that Pointe de la Revellata is the only place to go.

So I head east out of the city but as a non-diver I have to make do (oh, the hardship!) with the stunning Plage de l’Alga, secreted away at the foot of a winding gravel road with a twinkling azure sea and stone ruins. Another beach which I began to count as my second home during the week was at Algajola. I’m no authority on the best beaches in Europe but this dreamy plage extending beyond a small walled village – with a handful of great little restaurants – struck me as being close to paradise.

To get to Algajola in sedate style, you can take the small coastal train from Calvi. As a wise and friendly old chap who got chatting to me in a supermarket one afternoon said, this is the island’s very own TGV – “C’est notre train à grande vibration!”.

Much more to explore

Directly opposite Calvi, and perfectly visible on a clear day as I munch greedily on a 1kg bowl of moules-frites, lies Corsica’s alter ego. Away from the coast and its adherent lifestyle, the island’s rugged interior rolls away into the distance, a green mass of thick forest and winding roads dotted with perched villages.

We are in the Balagne region and this is the heartland of culinary, winemaking and artisan traditions with several routes to explore including the La Route des Artisans. This loosely connected collective of glassblowers, jewellers, potters, biscuit bakers, honey and oil makers welcome you into their workplace in the not unreasonable expectation that you might spend a few euros on the fruits of their labour. In Calenzana, not far from my Montemaggiore base, I am met by Christian Perrin, a big, bear-like biscuiterie owner with a winning smile, while at Moncale the wife of the resident oil and honey maker quietly explains her production processes and the family’s ongoing commitment to keeping the business alive in spite of the slim margins.

One industry seemingly doing rather better is Corsica’s winemaking trade. Like everywhere in France the local drop is always available at dinner so each evening I get to try a different tipple. Domaine d’Alzipratu is an exceptional rosé and on my artisan tour I enjoy a quick visit of the vineyard – it’s the equivalent of putting a face to a name on a bottle.

I need to pack a lot in, so on my last day I head yet further inland for the hills, to don my shorts and walking shoes for a mini-circuit of one of the island’s most reputed trails, part of the Grande Randonnée 20 (GR20). This really is where Corsica reveals the unruffled beauty of its interior. My trail winds past giant boulders and alongside freezing streams – through which I am required to wade knee-high at one point – with little for company except the wildlife. This absolute tranquility offers ideal pause for contemplation of what my Corsica debut has brought.

I feel like I’ve only scratched its surface. And what a beautiful, instantly compelling surface it is. Wholly French or not, I love it and thankfully there is so much more to discover next time.