Menton on the Move 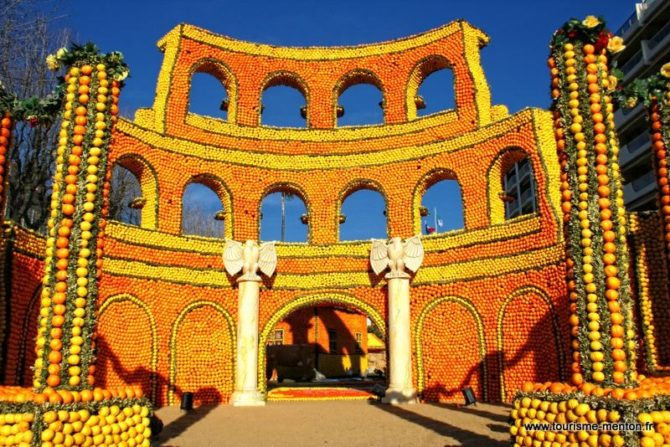 “Menton is a lovely little town, small and unreal,” observed author Katherine Mansfield nearly a century ago, writing of its “colour and movement that make you continually happy”. Surprisingly, not all that much has changed since Mansfield wrote her now-famous short stories in her tiny garden villa, Isola Bella, perched on a lush hillside in the sun-drenched neighborhood called Garavan.

East of the enclave of Monaco, sheltered by a circle of mountains at the Italian border, Menton has preserved a certain foreign charm, a combination of ancient Genoese influence and former aristocratic splendor. There’s a certain holiday languor in the air, and the dazzling light seems clearer and brighter than in any of the other seaside towns of the Côte d’Azur.

Come sunset, couples flock to the seafront cafés for aperitifs, as the sea turns mauve and orange, and the golden ocher and russet buildings of Menton’s Italianate Old Town take on a deeper hue. Small wonder that so many artists—Monet, Renoir, Cocteau, Le Corbusier, Eileen Gray and Graham Sutherland, among others—were drawn to this particular corner of the French Riviera.

Menton also lured royal visitors like Empress Eugénie, Queen Victoria and Edward VII, and wealthy foreigners who built palatial homes where they indulged in some of their wildest horticultural fantasies. The city’s microclimate is exceptional and gardeners here can grow things that can’t be cultivated anywhere else in western Europe—lemons, oranges, exotic flowering succulents, guavas and avocados. Unlike the gardens of Provence, subjected to occasional frost or the violent Mistral, tropical cuttings have thrived in Menton’s microclimate. Even today, it is still officially maintained that the city is a toasty three degrees warmer than anywhere else in southern France, boasting 316 cloudless days a year.

The sleepy city was once considered a staid, overly genteel town with fashionable tea rooms catering to the retired dowager crowd, but these days nothing could be further from the truth. Over the past few years, Menton has been actively reinventing itself with an exciting mix of contemporary hotels, top-notch restaurants, newly-restored historic gardens and a futuristic, multi-media private Cocteau museum on the port, designed by eclectic French architect Rudy Ricciotti, to house a private 1,500-work collection.

Understandably, Menton’s history is steeped in lore about the deceptively salubrious gentle breezes that brought droves of ailing 19th- and early 20th-century aristocrats. As early as 1860, British physician James Henry Bennett started a trend, recommending the sunny winters as the ideal climate for a seaside health resort. Although Bennett’s own case of tuberculosis improved, for others, including Mansfield and her fellow author Robert Louis Stevenson, the dampness of the Mediterranean climate only worsened their condition.

Though there may be few nocturnal hotspots in the winter, these days you see crowds of younger visitors and smartly dressed Italians scooping up fragrant citrus soaps in Old Town and shopping for fresh fruit in the municipal covered market. Fortunately, the local gastronomic traditions have been upheld—on the market square you’ll find stands selling such Mentonnais specialties as pichade, a tomato, onion and anchovy tart sprinkled with garlic and black olives; barbagiuan, ravioli or dumplings with many variations (including Monégasque and Niçois) but here usually stuffed with Swiss chard and Parmesan cheese; and poutine omelet, made with tiny transparent fish fingerlings.

For a lunchtime snack of socca—a thin, savory chick-pea pancake cooked in a wood-burning oven—and some of the best local products, head for Saveurs d’Eléonore, a small shop on the market square stocked with Menton lemon and tangerine jams, local lemonade and locally brewed beer with zests of orange and citrus. Behind the square, up a steep back street, is the Huilerie St Michel, an olive oil producer founded in 1896. The current owner, Karim Djekhar, has innovated the company’s product line, and now offers a top selection of olive oils including a heavenly blend of their amber nectar infused with Menton lemon and ginger.

Farther uphill, overlooking the sea, a lovely mosaic-paved square flanked by two beautiful Baroque churches is the enchanting site of Menton’s outdoor Music Festival. The 17th/18th-century Saint Michel basilica is the largest and most important Baroque church in the region, and its gilded marble, Genoese-style interior one of the most ornate, replete with an altarpiece depicting the archangel Michael slaying the dragon. A statue of Saint Michel also graces the basilica’s pale yellow and green facade, with the saint’s foot on the head of a surprisingly jaunty Lucifer, his elbow hooked over the lintel.

The second church, the small Chapel of the Conception that belonged to the Order of the White Penitents, is decorated with ornate stucco garlands, its basket-handle pediment topped by statues of Faith, Hope and Charity. Recently restored, the mosaic pavement displays the Grimaldi coat of arms, composed of some 250,000 gray and white pebbles gathered from Menton’s beaches.

In the heights of Old Town, the terraced cemetery, Le Cimetière du Vieux Château, is perched on the site of a medieval castle, with a sweeping view of the coast. The inventor of modern rugby, the Reverend Webb Ellis, is buried here, and another cemetery just above, Le Trabuquet, contains the tomb of British artist Aubrey Beardsley, who lived in Menton for two years and died of tuberculosis at age 25.

Down by the port, the Musée Jean Cocteau is housed in a little 17th-century stone fortress where the artist and writer once lived. Turned into a museum at his suggestion, it was furnished with a mixed-bag collection of paintings, ceramics, sculptures and more beach-pebble mosaics. Currently being renovated, the museum is slated to reopen in 2011, with the huge, newly acquired Severin Wunderman collection featured side by side with Cocteau’s own works, including clips from his films, all under the dazzling white roof of a state-of-the-art building at the water’s edge.

Cocteau also decorated the Wedding Room in the Hôtel de Ville, and romantic visitors fly in from all over the globe to exchange matrimonial vows in the whimsical room, a theatrical set of swirling seas, mythological scenes and fantasy flourishes, from a fish-eyed fisherman and his fiancée to palm tree candelabras.

No Menton trip is complete without a visit to the magnificent gardens in the terraced hillsides of the Garavan district. The most spectacular—and possibly one of the best-restored gardens in Europe—is the Serre de la Madone, created by Lawrence Johnston. In 1924, while he was convalescing in the village of Gorbio near the Franco-Italian border, he decided to create a winter garden nearby. The 25-acre property is an eclectic mix of fountains, waterlily pools and pergolas, scattered with statues of Cupids and Madonnas. Expect the unexpected: rare plants from Johnson’s journeys to Africa and Asia include a tropical elephant’s foot tree, starry pink amaryllis belladonna, carpets of dark-blue lumbago, rare camellias and Chinese peonies.

The Belle Epoque villa and sumptuous gardens of Val Rahmeh, created by Lord Radcliffe at the end of the 19th century, are best known for an impressive collection of subtropical plants and fruit trees. There are more than 700 exotic species from Africa, Australia, Asian and Latin America, including a rare yellow-flowered sophora toromiro tree from Easter Island.

The 1920s Moorish-style Villa Fontana Rosa was the final home of Spanish author Vicente Blasco Ibáñez, known for his novel The Four Horseman of the Apocalypse, which was adapted as a 1921 film starring Rudolf Valentino. The villa’s garden, known as the Garden of the Novelists, was designed to honor great masters of literature, and is well worth a visit for its ornate fountains, wisteria-shaded pergolas and citrus groves. The garden seats, tiled with striking traditional blue and rose-flowered ceramics from Seville, are inscribed with quotes by Cervantes, Dickens and Shakespeare. Sadly, over the years, the house was abandoned, pillaged and reduced to (admittedly picturesque) ruins. The good news is that the garden is being meticulously restored and is open for visits by appointment.

(Ceramicist Stéphane Montalto, who is part of the Fontana Rosa restoration team, has his own atelier in the neighboring heights of Roquebrune-Cap-Martin, with a showroom chockablock with aquamarine dishes and Old Riviera-style vases.)

Menton’s most recent upscale transformations include two stylish and surprisingly affordable beachside hotels: Hôtel Napoléon, on the coast road near the Italian border, and the Hôtel Victoria, on the seafront in the neighboring village of Roquebrune. The enterprising young owner of both hotels, Matthew Likierman, has gone to great lengths to focus on Menton’s artful garden heritage. The luminous 44-room Hôtel Napoléon is lined with a stunning collection of original vintage posters of the Menton Biennale, and the penthouse Cocteau and Sutherland suites pay homage to the artists with original lithographs and frescoes. Even the terraces are decorated with unusual succulent plants, and there’s also a mini-pool in the front garden. For beach dining, the Napoléon’s snazzy terrace restaurant is a pure joy—copious salads, fresh fish, pasta and a do-it-yourself ice cream parlor next door.

The more recently revamped 32-room Hôtel Victoria was designed by rising star Jean-Philippe Nuel, who also did La Villa in Paris and Le Grand Balcon in Toulouse (France Today, Oct 2009, see review). The style is a direct tribute to the clean, pure lines of Roquebrune’s star architects of the 1920s and 1930s, Eileen Gray and Le Corbusier. The sea and sky theme kicks in as soon as you enter the lobby: striking cobalt blue walls, white LC2 Corbusier chairs, an LC4 sofa and a luminescent bar adorned with Cocteau-inspired curves. Upstairs, the newly revamped sea view rooms are equally chic, decked out in intense blue and dazzling white, with blond wood parquet floors, gleaming navy-blue-tiled bathrooms and private terraces with a dreamy vista of the Mediterranean.

For a table with an equally spectacular view of Menton’s Old Town and harbor, the restaurant Mirazur is perched above the sea, flush with the Italian border, housed in a multi-level ultra-modern gem of glass, wood and chrome, and surrounded by a garden of tropical succulents and lemon trees. Michelin one-star chef Mauro Colagreco, who hails from Argentina, excels in original Mediterranean-style dishes, using wild herbs, edible flowers and the freshest vegetables. And Menton lemons, of course.

Originally published in the July/August 2010 issue of France Today; updated in January 2014