Dining in Paris: Le Sergent Recruteur on the Île Saint-Louis 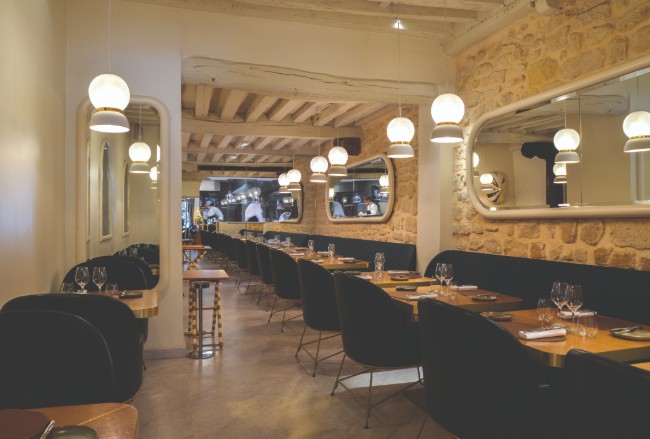 Surrounded by the Seine, and a discrete, intimate, slightly mysterious place, the Île Saint-Louis is one of the most charming neighbourhoods of Paris. For years it also had one of the city’s most fashionable restaurants, L’Orangerie, owned and run by the late French film actor Jean-Claude Brialy. This table, once as famous for its spectacular flower arrangements as for its classical French cooking, was a favourite of Paris fashion designers, socialites and lm stars; all of whom enjoyed the attention of the gallant Monsieur Brialy, who frequently oversaw the dining room. After his death in 2007, the chic crowd mostly moved on, though the restaurant is still in business today.

Now, however, an updated version of another famous local restaurant, Le Sergent Recruteur, is attracting fashionable Parisians to dine on the island once again. This is because many of the loyal customers of the exceptionally talented chef Alain Pégouret, the eatery’s new chef-proprietor, have followed him to his new table from Laurent, a major Paris power table in the gardens of the Champs-Elysées where he cooked for 18 years.

“I loved working at Laurent, but I wanted a restaurant of my own,” says Pégouret, a native of Cannes and a gifted gastronomic classicist who enlivens his dishes with dashes of culinary wit.

Working in an open kitchen at the back of a contemporary dining room designed by Spanish interior architect Jaime Hayon, Pégouret’s menu also evolves with the seasons but everything we ordered during a recent dinner here was impeccably executed, refined and delicious. The chef’s foie gras poached in sangria with garnishes of grapefruit and rhubarb was a perfect example of the elegance that is his signature. The sea bream ceviche with coriander sorbet and seaweed was very original too. Chicken roasted with black garlic under its skin was umami-rich and succulent, while veal sweetbreads sautéed with basil were impeccably cooked, with a golden, slightly crispy exterior that contrasted with the velvety interior.

Don’t miss the ginger-infused chocolate biscuit with cocoa sorbet for dessert, and note that the young sommelière has created a very good wine list. This is also a useful address for anyone wandering the Île Saint-Louis and wanting a lighter meal, since they serve small-plates like sautéed girolles mushrooms, cod ceviche and vitello tonnato in the bar at the entrance to the restaurant. The lovely Île Saint-Louis finally has the destination table it so very much deserves.