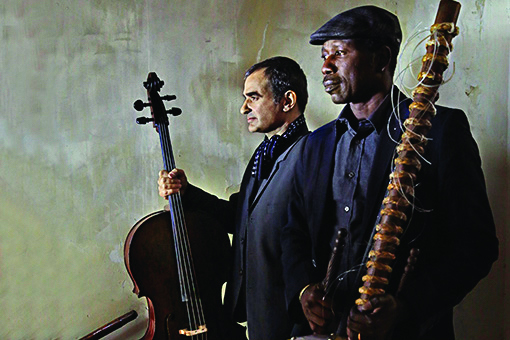 They come from different musical worlds; Mali’s Ballaké Sissoko is a master of the kora, a West African harp lute, while Frenchman Vincent Ségal is a renowned classical cellist. More than six years after collaborating on the critically acclaimed album Chamber Music, the duo have re-embraced their winning formula with a second disc, teaming up once again on Musique de Nuit, recorded in Bamako, Mali, last year.

To coincide with the new album, they’ve hit the road, taking their magical fusion of West African, Brazilian and jazz manouche sounds to the stage. Sissoko and Ségal’s melodies and rhythms soar above and beyond borders, while their musical chemistry was strengthened during a 200-plus date world tour that came hot on the heels of the pair’s first album.

Sissoko has said, “Today when we play, we understand each other without even saying a word.” It’s this beautiful harmony that will no doubt wow audiences when the duo perform a one-night-only show at the prestigious Théâtre des Champs-Élysées, in the heart of Paris’s Triangle d’Or.

Previous Article Announcing the Brand New FranceToday.com
Next Article Kid or Adult, Summer Is a Great Time To Learn French in California