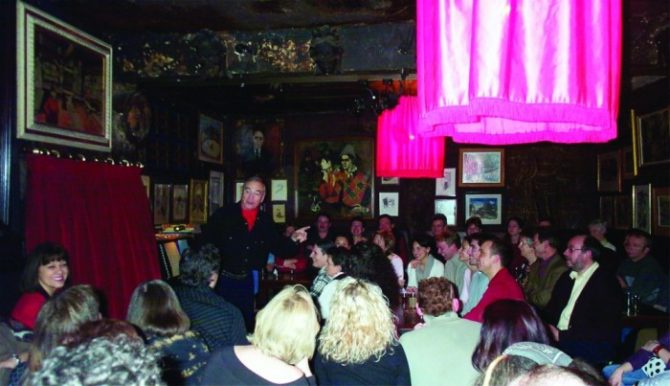 This tiny cabaret in the heart of Montmartre has been described as a “véritable conservatoire de la chanson Française” and it’s been providing a jovial blend of songs, comedy and poetry since 1860. At the turn of the 20th century, Au Lapin Agile was a favourite rendezvous for struggling painters and poets, such as Picasso, Utrillo and Apollinaire. Largely unchanged, its couldn’t be further from the razzle-dazzle of Paris’s other well-known cabarets, but that’s why it’s so beloved and unique.

Audience participation is key, and the spectators (many of them French) aren’t shy. The audience is seated on low stools in the cosy, dimly-lit room, no more than a couple of metres from the performers, which makes for an incredibly intimate atmosphere. A round of group songs – and a drop of the ‘house special’, a delicious cherry liqueur – gets everyone warmed up before each artist runs through their numbers.

The classic French melodies (Les Champs-Élysées), drinking ditties (Les Chevaliers de la Table Ronde) and humorous tunes (Fais-Moi Mal Johnny) will have you singing along, even if it’s only to join in a rousing chorus of “oui, oui, oui, non, non, non!”