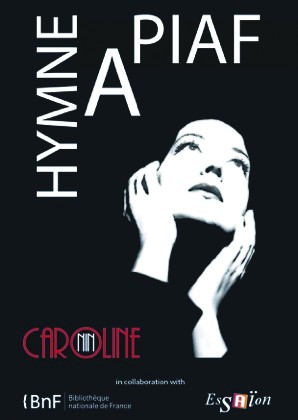 Legendary French songbird Edith Piaf was born a century ago this year, and this anniversary will be marked by a host of commemorative events, including a fantastic exhibition, simply entitled Piaf, at the Bibliothèque Nationale de France.

Another is this not-to-be-missed soirée at the Essaïon Théâtre in Paris’s historic Marais district, French chanteuse Caroline Nin’s already internationally acclaimed show, Hymne à Piaf. This bilingual tribute to “la Môme” has completed a successful world tour, during which Nin took such prestigious venues as the Sydney Opera House and London’s Royal Festival Hall by storm.

During this intimate cabaret show, Nin performs some of Piaf’s most beloved tunes, including Hymne à l’Amour, Padam, La Vie en Rose and the anthemic Non, Je ne Regrette Rien. On stage, Nin is magnificent to watch and listen to – charismatic, captivating and blessed with a smooth yet slightly smoky jazz voice – and is the perfect choice to pay homage to one of France’s most beloved musical divas and her glorious, most beloved repertoire of chansons Françaises.