My Life in Paris: The Magical Mister Noir 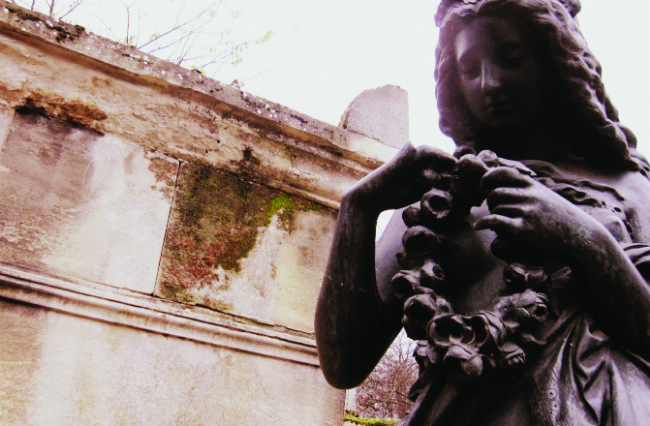 Beatrix had arrived at Gare du Nord with a mission and a Longchamp bag swinging high on the crook of her arm. Dressed to the nines, a vintage red scarf sat squarely on her blue, wool-clad shoulders, with each jaunty step down the terminal corridor her vinyl boots squeaked. We hugged.

She seemed distracted, but I didn’t prod or pry. Instead I waited for her to spill the beans, and eventually she did. Later on in the afternoon at Le Gambetta café, as we sipped our mugs of thick chocolat chaud, she gave me the sweet lowdown: Bea and her husband wanted to start a family.

“And here is my ticket!” she said, pointing to an earmarked page in a well-worn guidebook to mysterious places in Paris, before adding, “If he can’t do it, no one can!” Holding back no tears or cackles, we hatched a plan to visit the popular old soul featured in her booklet. After clinking our cups three times – for luck, of course – we flew out of the café door.

Dark clouds were racing across the purple sky, all round and determined, as we somehow made the leap from Avenue Gambetta to Rue du Repos. With beaucoup de flowers in hand, two hours before closing, we charted a course from the forbidding iron gates of le Cimetière du Père Lachaise toward Victor Noir’s gravesite, in the northern section.

Bea led as we lightly trod along the brick paths, through the maze of moss-covered tombstones and mausoleums, side-stepping cats, dead lovers, weeping angels, and bats in marbleised mid-flight. Here are the graves of several of my personal heroes: Colette, Chopin, George Méliès, Modigliani, Proust, Oscar Wilde and Édith Piaf.

Thunder grumbled in the distance. The cemetery would be closing soon, and it was already hard to see the epitaphs in the waning light. But there was no turning back. “There he is!” buoyant Bea cried as we rounded the bend. I spotted him, too, along with a group of women of all ages, patiently waiting for a rendezvous with Victor Noir’s life-sized monument.

You see, according to legend, if you are looking for un grand amour, Victor is your man. Shot in a duel by Prince Pierre Bonaparte in 1870, political journalist Noir became a heroic martyr overnight. Now sculpted in bronze by Jules Dalou in a sexy, hyper-realistic style, he comes ‘fully equipped’. They say that if rubbed in all the right, bright coppery spots, Noir will not only miraculously assist with love and marriage, but also with the baby carriage. After a session, leaving a perky flower in his top hat typically seals the deal.

Bea takes her place in line, shuffling forward as each woman has a semi-private heart-to-heart with Monsieur Victor. I collapse on a bench and gaze back on this field of heartfelt gestures. channelling Freddie Mercury, a woman starts to sing Somebody to Love as she touches Victor’s lips with her fingertips. Here, hope is palpable, and it soothes and re-energises me at the same time that it makes me pensive. Finally, it’s Bea’s turn.

As I watch my radiant friend arrange her heap of the flowers on top of Victor Noir, and whisper in his ear, Oscar Wilde’s words rush back to me: “The world is divided into two classes: those who believe the incredible, and those who do the improbable.” But perhaps it is possible to embrace both, because, in this moment, surrounded by this potent mix of past and present, suddenly everything feels possible. I guess I will have what Bea’s having. Heady optimism, that is.

As the woman seated next to me on the bench quipped, “This worked a charm with my first husband, George. But this time I’m back for a lover!”