The New Boutique Hotels of Paris 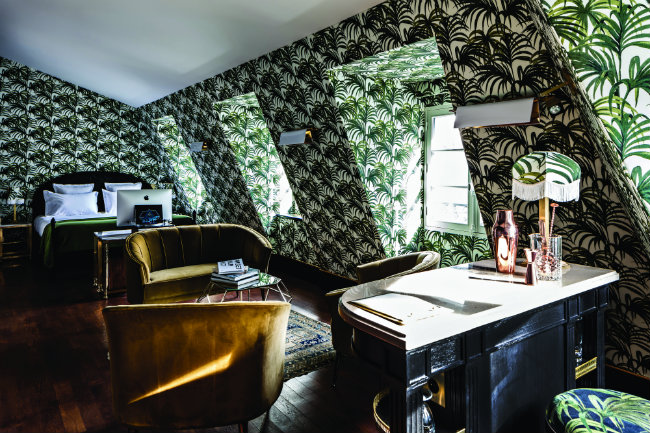 With the exception of Paris’s iconic luxury hotels, three- and four-star hotel restaurants and bars used to be soulless affairs deprived of any atmosphere, or punters, but in the past few years a new boutique hotel scene has been gaining momentum. Since 2013, a dozen smaller, game-changing hotels have opened their doors. Prized by a cool crowd of young, discerning travellers and locals alike, they have become the place to be seen sipping on a bespoke cocktail, dining on fresh Italian burrata, or heading upstairs to bed.

The movement was relatively slow coming, with Hôtel Amour as early as 2006, Mama Shelter in 2008 and Hôtel Edgar in 2013. Creating a stir, they proved there was a gap in the market. “We noticed that no one else was doing hotels with a real bar and restaurant that offered a memorable, fun, almost club-like experience at night, and contemporary well-designed attractive rooms at affordable prices. It was about finding the right balance because we didn’t want to fall into the backpacker category either,” said former owner Serge Trigano (of Club Med).

Located in the off-the-beaten-track 20th district, the cosmopolitan Mama Shelter (partly sold to French hotel giant Accor in 2014) is the fruit of Mr Trigano’s collaboration with celebrity designer Philippe Starck. Not only did they give budget hotels a run for their money with a lead-in rate of €69, but they also offered something no other boutique hotel did in terms of facilities and ambience. So successful was the concept that they soon rolled out a Mama in every big French city, as well as Istanbul and Los Angeles. 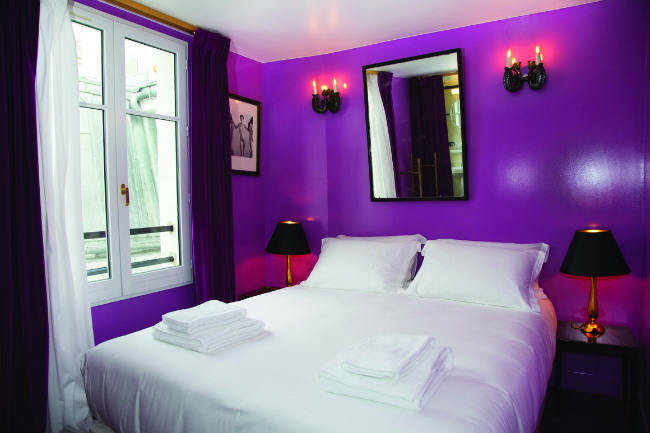 The restaurant and bar with rooms concept aside, it was 30-something Adrien Gloaguen who became a part of the beginnings of the movement in 2013 with his Hôtel Paradis. On a Strasbourg Saint-Denis backstreet, it was one of the few contemporary-cool hotels that came with a reasonable price tag – and that brought it immediate success. The first hotel venture for Parisian wunderkind Dorothée Meilichzon, the face behind dozens of hit restaurants and bars in Paris and beyond, the 38 rooms are kitted out in her cosy retro-contemporary style. The hotel is also small enough to offer a personal experience, which helps make guests feel right at home.

For his second venture, Mr Gloaguen has teamed up again with Ms Meilichzon. The Hôtel Panache, nicknamed the ‘flat-iron’, after the New York landmark, opens this month on Rue du Faubourg-Montmartre in the 9th district. It has 40 rooms and a restaurant headed by David Lahner of Racines and Caffè Stern fame.

Reinventing the voguish, multi-venue concept of hospitality moguls the Costes family, the feisty and creative childhood buddies Olivier Bon, Romée de Goriainoff and Pierre-Charles Cros created the Experimental Group and turned Parisian cocktail culture on its head with their multitude of bars and restaurants. After revolutionising the wine-driven bar scene and opening venues in London, Ibiza and New York, the young mavericks then turned their attention to the hotel industry and opened the city’s first ‘bed and beverage’ hotel.

Entirely designed by Dorothée Meilichzon – a name now synonymous with success who is also behind most of the group’s establishments – the cocktail-focused Grand Pigalle Hotel was an instant hit with travellers from all four corners of the world, and also, importantly, with the locals. “We’re really happy with the result, especially to see that the restaurant/bar has become a real hotspot for Parisians too, which was really important to us from the start,” said co-owner Olivier Bon. It has been such a success that the clan will be exporting their hotel know-how across the Channel in London later in the year.

Since the Grand Pigalle, the trio has since worked with businessman Samy Marciano on the restaurant and bar of his new hotel. The 49-room Bachaumont opened last September, and the design was also signed by Ms Meilichzon. A sleek mix of contemporary Parisian flair and Art Deco touches dating from the building’s 19th-century heyday as a trendy hotel, its bar and restaurant have become venues in their own right, placing the hotel well and truly on the map. 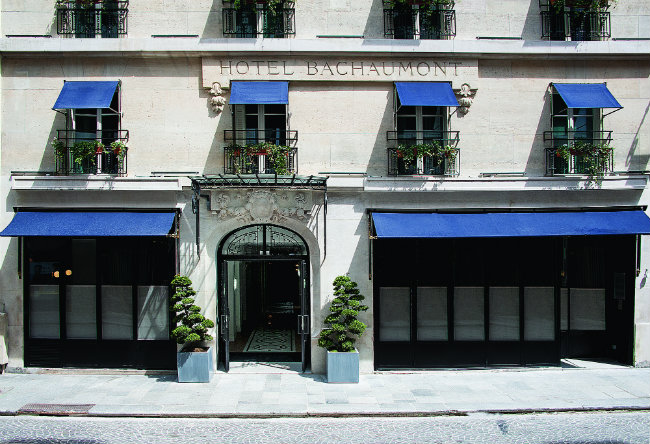 Others on the Scene

While no neighbourhood in Paris is complete without a joint by the Experimental Group, they’re not the only ones on the scene. Pierre Moussié of the Sans-Soucis, Mansard, Floréal and more recent Brasserie Barbès, has also taken to the hotel industry. The Hôtel Providence has a distinctive, English-hunting-lodge-style restaurant with quirky rooms that vary wildly in shape and size. Designed by the bar and restaurant magnate, his wife Elodie and friend Sophie Richard, the 18-room hotel boasts gutsy House of Hackney velvet wallpaper with leafy prints and burnt red Kilim patterns, paired with hardwood floors and beautiful bespoke cocktail bars with ice-makers in each room. 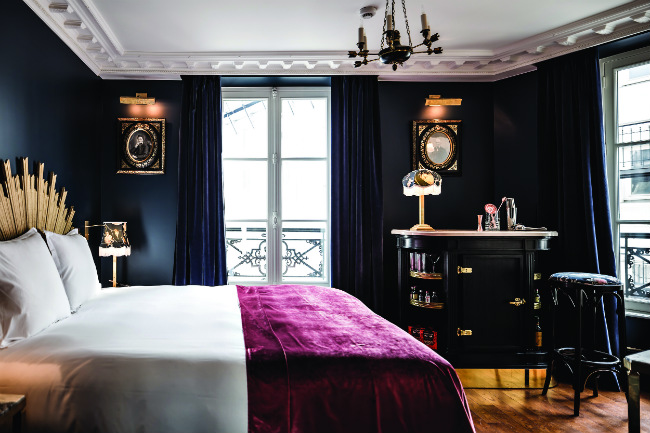 The hotel may be carved out of a similar concept to the Grand Pigalle and Bachaumont, but its almost Gothic speak-easy bar and restaurant with handsome outdoor terrace, and its simple but audaciously lined rooms, give it its own merit. “I wanted to create something that pushed our boundaries even further, something that is a sort of compendium of our favourite travels and experiences,” said Mr Moussié.

Also dabbling in the restaurant with rooms concept, film producer Jean-Pierre Marois, who overhauled and reopened his father’s Les Bains last April, demonstrates that you don’t have to be under 40 to play the boutique hotel game. Paris’s answer to New York’s Studio 54 throughout the ‘80s and ‘90s, Les Bains was originally built in 1885 as an exclusive bath house with a café frequented by Marcel Proust. It later became an exclusive club where the world’s celebrities partied – from Bowie and Warhol to Lagerfeld and De Niro. A soulful hybrid venue, the blood-red restaurant is tethered to the legendary basement club where the Rolling Stones and Joy Division once performed. Upstairs, Mr Marois added 39 smart light-filled rooms designed by Tristan Auer and Denis Montel. 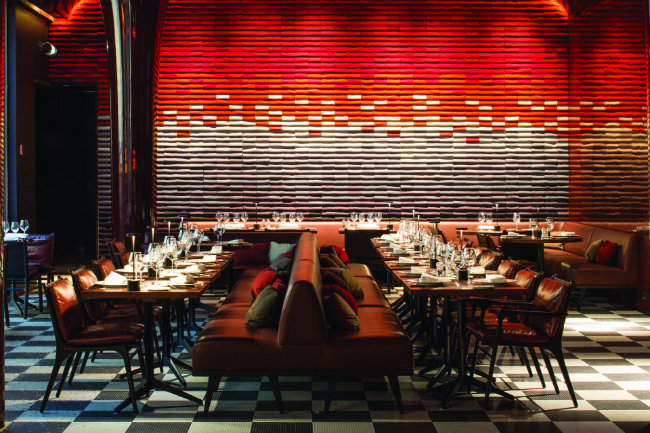 Even the below-the-radar 13th district of Paris has its own new generation boutique hotel. Brainchild of former fashion journalist Vanessa Scoffier, Hôtel Henriette’s bucolic farmhouse haven has bright, homely Scandinavian-style rooms and an attractive conservatory. One of the city’s most charming pied-à-terres, you’d be hard pushed finding a better value hotel.

Following suit is the exclusive Montana Club with its six new eclectic apartment style rooms upstairs. Inspired by the likes of wild child Serge Gainsbourg, they were designed by Vincent Darré, who was also behind the Petrossian-fuelled Gauche Caviar restaurant and rooftop sushi bar which opened this spring. 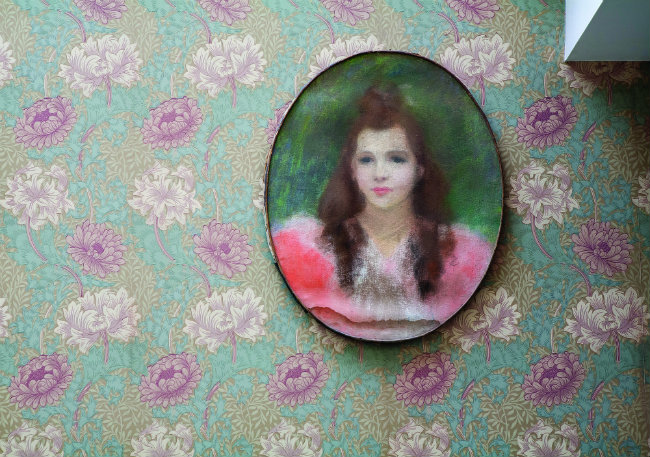 Another newcomer on the scene is local favourite Hôtel Amour’s big sister, the Grand Amour. Designed by street artist and club owner André Saraiva, it is part of Thierry Costes’ Beaumarly Group. With 42 pop-splashed rooms and an apartment, the boutique hotel comes with a barista-helmed coffee shop, a restaurant, cocktail bar, library, artwork by Keith Haring and photography by Man Ray.

While Thierry Costes is busy with the Grand Amour, his uncle Jean-Louis, who held on to the swanky Hôtel Costes when his brother Gilbert and he split the empire some years back, has snapped up the aging Hôtel Le Lotti just a few doors away. It will be completely revamped before reopening later in the year.

These new hotel openings show there really was a gap in the market. Those grand hotels with hefty prices and bland lodgings with close to no guest experience now have serious competition. From quiet and cosy hotels with good beds and views of picture-perfect Parisian surroundings, to lodgings with cool cocktail bars and restaurants spilling with locals, this new generation of hoteliers has succeeded in making hotel dining cool again. And they have given the sidelined segment of three- and four-star establishments a real guest experience, thus catering to a more demanding, informed and fashionable crowd. Gone are the days when the sound of the stirrer hitting the sides of your glass would echo through the empty bar. Now hotel restaurants must be booked weeks in advance, and bars are standing room only. In fact, on most evenings you’d be lucky finding anywhere to rest even the tips of your elbows. 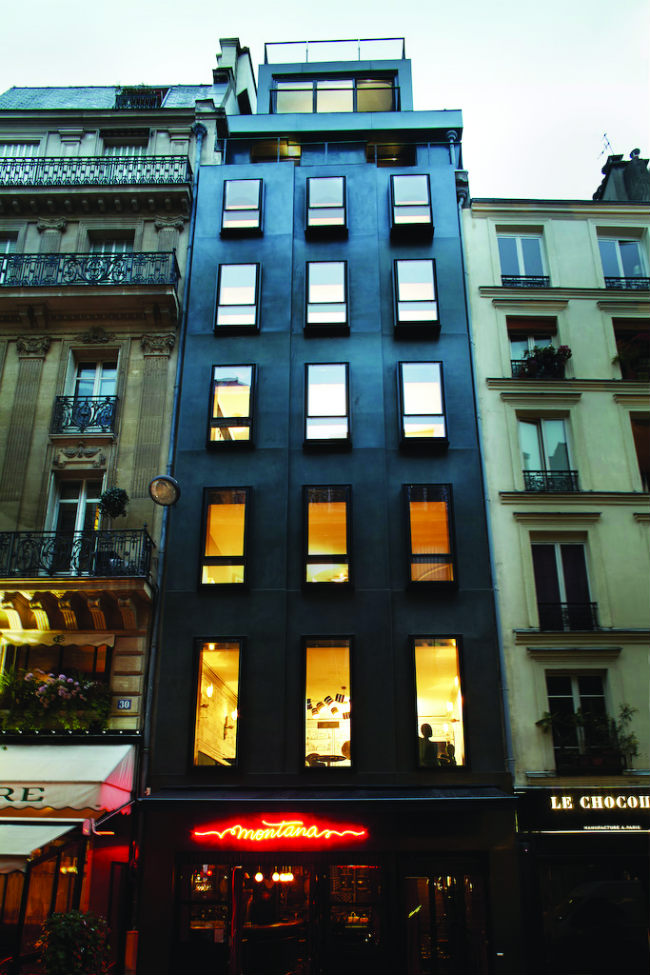 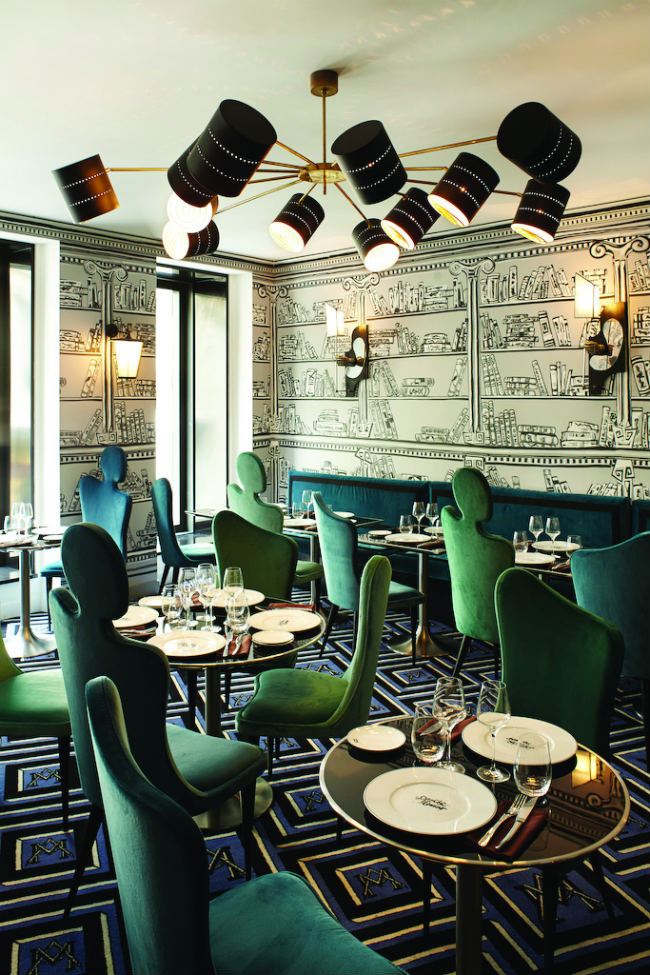 Previous Article Kid or Adult, Summer Is a Great Time To Learn French in California
Next Article Saint-Cirq Lapopie, One of the Most Beautiful Villages in France