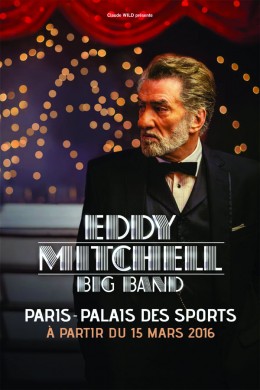 Like his compatriot Johnny Hallyday, French musician Eddy Mitchell is famous for adding a distinctly Gallic touch to contemporary American music, and for enjoying a successful career that’s spanned more than half a century. Some four years after taking home the prize for ‘Musical Tour or Concert of the Year’ at the prestigious Victoires de la Musique (the French equivalent of the Grammys or the Brits), Monsieur Mitchell returns to the stage with a new show, Big Band.

The series of concerts marks the recent release of his 36th album of the same name, a collection of jazzy standards in a tribute to crooners such as Frank Sinatra and Nat King Cole. Backed by no fewer than 21 musicians, he’ll perform material from the new record, as well as his biggest hits, Le cimetière des éléphants, Couleur menthe à l’eau and Pas de Boogie Woogie, which shine again thanks to new, big band-friendly arrangements.

Previous Article A feast for the senses: Cannes, Grasse and Mougins
Next Article What a Belle Soirée! The César Awards in Paris