Paris Houseboats: Living and Partying on the Seine’s Péniches 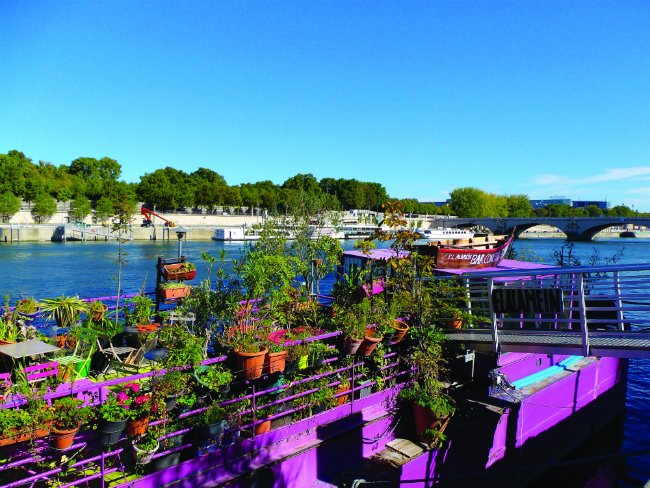 With the Seine and three canals winding their way through Paris, transport, travel, fun, and living on the water have always featured high in daily activities. The motto of the city of Paris, Fluctuat nec mergitur (tossed but not sunk) dates back to the Parisii tribe who inhabited the spot by the Seine around 250 BC, and it still fits perfectly today. In 1991 the city’s river banks, the Rive Droite and Rive Gauche, were officially added to the list of UNESCO World Heritage Sites, proving just how important – and beautiful – the interaction between city and water is in Paris.

Dating to the 16th century, river barges were typically flat-bottomed, wide boats built to transport goods along rivers and canals. Initially they were not motorised, being instead either punted or pulled by animals – sometimes even towed or pushed along by other, smaller boats. Modern progress and the industrial revolution might have brought engines to the barges, but it also resulted in trains, with their speed and size quite literally overtaking barges when it came to importance in transporting heavy goods over long distances. Still, if you look at any European river, you’ll see a steady stream of barges going past, either low in the water, filled to the rim, or high and large looking to pick up goods. But just as often you’ll see those trusty old barges re-invented as something else.

In the centre of Paris you’ll find plenty of examples of reconditioned old péniches and more modern variations moored along the Seine’s quays, under the bridges between the Île de la Cité and Saint-Louis, in the canals Saint-Martin and Ourq, and in the Port de l’Arsenal and Bassin de la Villette. And each one tells its own story. 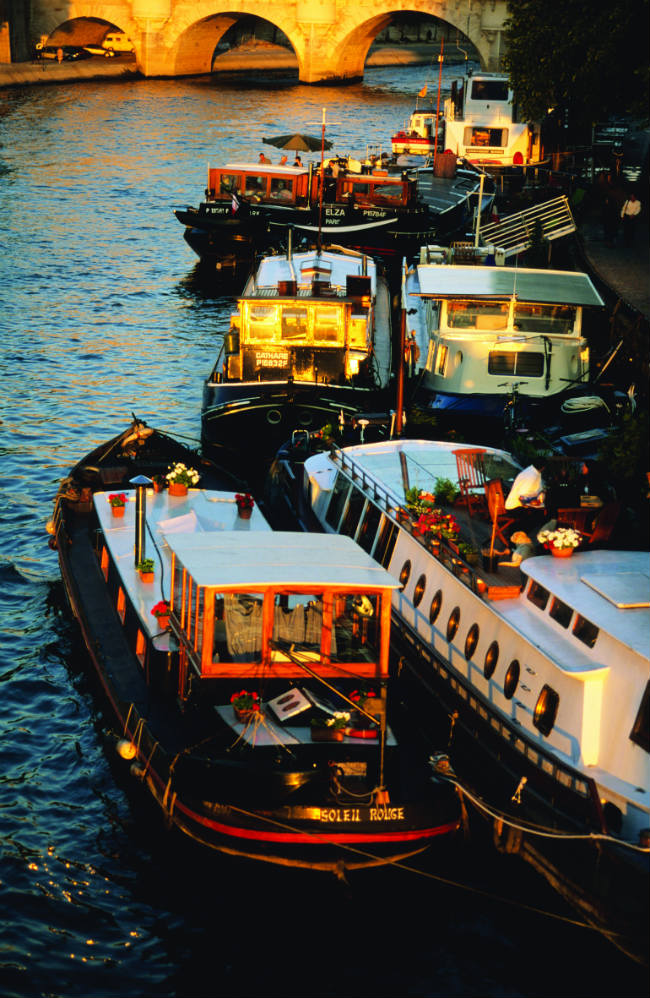 Stéphane Bachot lives on the Seine. In the shadow of the patron saint of Paris, Saint Geneviève, on Pont de la Tournelle, his 110-square-metre, four-bedroom péniche, Ark, bobs with every passing Bateau Mouche. Ten years ago, when their older children left to go to university, Stéphane, his wife and younger daughter decided to downsize, and, being flexible, they fell in love with the size, outdoor terrace, views, and absence of close neighbours that Ark, the 1932-made Dutch riverboat, gave them. He says: “I love our independence in the middle of Paris, with no neighbours making noise or moaning at ours. We have an unusual terrace with a unique atmosphere, regular visits from ducks and swans, and so many exceptional goings-on to observe.” Also daily life on the Seine is somewhat different to that on land: “When another boat  owner nearby lost his carte vitale, and I lost my mobile phone in the river, the River Police, la brigade fluviale, came by Zodiac and with divers to recover our items.”

He often has to adjust the moorings, depending on the water levels, but rarely takes his péniche on a trip. He explains: “The boat works with an old British Lister engine, which starts with a can of compressed air. The age of the engine means that, at 8mph, it takes us three weeks to get anywhere nice.”

Stéphane also sells his dream to others, and a péniche moored in the heart of Paris with views of the Eiffel Tower, some 50 square metres of living space, can be bought for under €300,000, giving a clue as to why some choose water living over apartments. 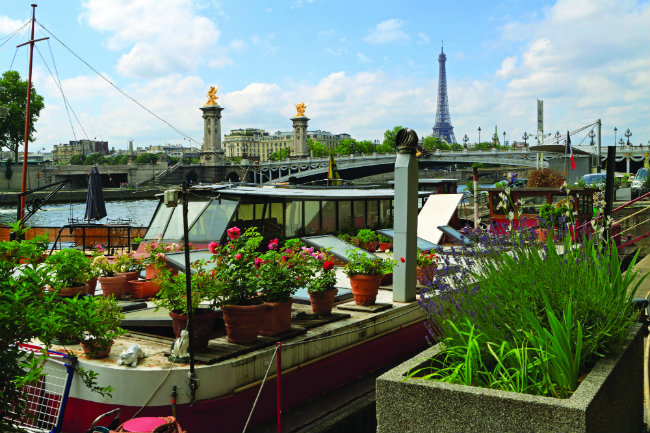 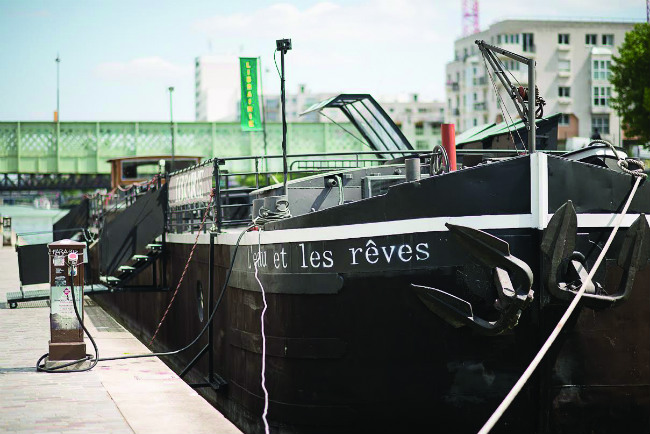 One of France’s gigantic canal boats – fitting the lock standardised by the Freycinet Act (1879) of a parallel-piped shape 40 metres long and 5.2 metres wide, and today moored alongside Quai de L’Oise just off the Bassin de la Villette – has been given a new life as a bookstore and cultural centre where creation takes the form of workshops, theatre groups, readings and art gallery space.

Brainchild of sailor Didier Delamare, his publisher wife Judith Rosa, and his son, the péniche L’Eau et les rêves was named after a work by philosopher Gaston Bachelard. Judith Rosa says: “We had the idea of a floating bookshop on the theme of water because of Didier’s seafaring profession, his passion for the sea and boats, and I just love the world of books. I think that boats and books go well together, for their charm on one hand, and the sensations both invoke: the mooring that drops, the creaking, the soothing movements. These sensations invite us to play. I feel that people who board L’Eau et les rêves share this feeling – if some may seem a little surprised, others often tell us that they are seduced by the meeting between these two worlds.”

On offer are beautiful coffee-table books, pocket-sized poetry books, history and literature, but the specialization, not surprisingly, is the sea, both general travel and great voyages. There is a secluded area for children’s books so inviting that you find yourself browsing the beautifully illustrated books even if you don’t have a child in tow. On deck are a couple of traditional Parisian bouquiniste stands holding second-hand books, and a bench overlooking the canal enables you to dive into a new story there and then. 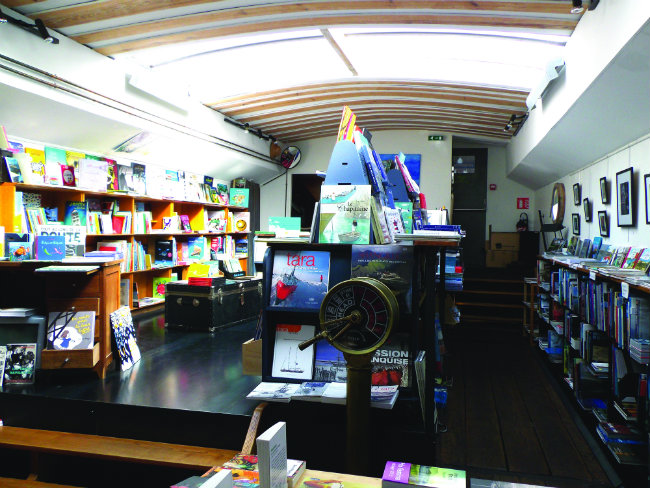 When in Paris, the evenings entice you to saunter along the Seine, take in the sights and stop for a bite and a drink. And where better than the Rosa Bonheur sur Seine, under the shimmering Pont Alexandre III and with the Eiffel Tower doing its hourly sparkling in the background?

This modern take on the péniche – all glass, wood decking and neon lights – is a combination of bar, tapas, snacks and pizza restaurant, and lounge. Music, chattering, and groups of young Parisians make for a noisy setting, but for a setting that is a lot more fun and less intimidating that some of the plush bars in Paris. If you’re patient, you can even get a play at the foosball table, or simply sit back and watch the Bateaux Mouches go by. The views are incredibly hard to beat, and in summer the entire quay is alive with small bars, outdoor seating and revellers. 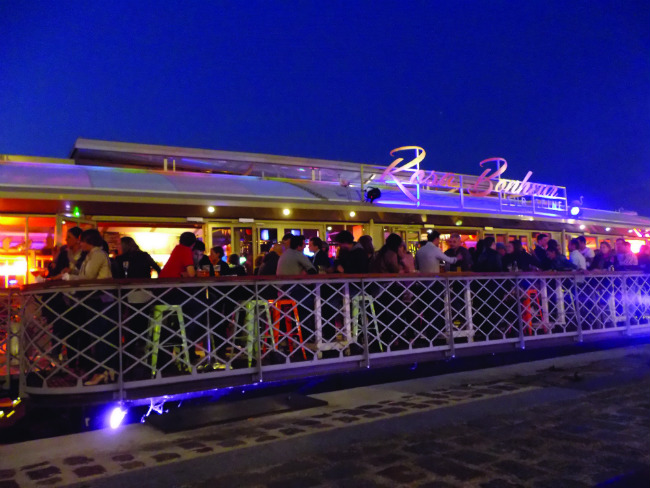 Péniche Antipode is a great big hulk of a boat, once a Belgian cargo boat, dating back to the early 1940s. For over a decade now the boat has been home to a children’s theatre group and offers regular plays events for children, live music for adults, and special events ranging from tango exhibitions to literary meetings. Moored along Quai de la Seine near Bassin de la Villette, a café bar is open all day, with the restaurant opening for lunch and dinner. It is a buzzing, creative place with a great atmosphere, and if you go on Saturday or Sunday mornings, there is a market right next to it. 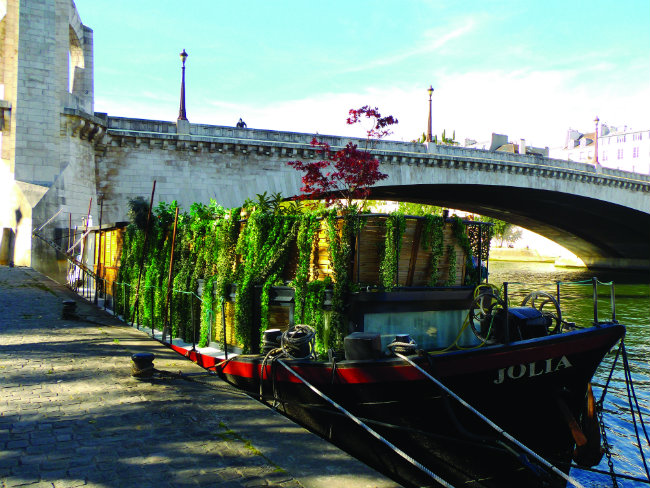 Just when you thought you couldn’t swim in the Seine, think again. The Piscine Joséphine Baker is a purpose-built glass and steel barge housing a 25-metre swimming pool and moored alongside the Bibliothéque Francois Mitterand on Quai François-Mauriac near Gare d’Austerlitz in the 13th arrondissement. With a retractable roof, in summer you can swim under the open skies, whereas in winter you are sheltered from the weather. Complete with a kids’ pool, hamman, gym, sauna and solarium, this is a great way to spend a day on and in the water for just €3. 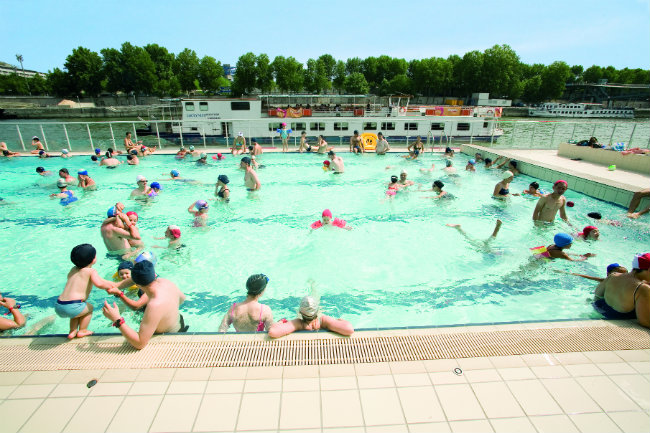 Bright pink and overgrown with plants, you simply cannot miss El Alamein, a hip little restaurant-café that hosts live concerts nearly every night. Since 1996, El Alamein has been moored, like the Piscine Joséphine Baker, on Quai François-Mauriac. Named after the WWII battle in North Africa just as much for the meaning of ‘El Alamein’, namely ‘Double World’, the transition zone between the real world and the world of dreams, the music played ranges from punk to chanson, from rap to rock. No reservations mean that when the doors open at 8:15 pm you should try and grab the best place in the house before the concerts start at 9pm. 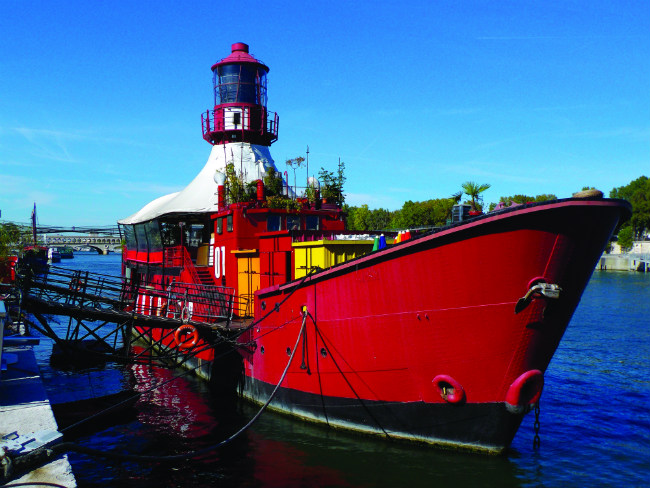 Moored at Port de Tuileries alongside the River Seine between Léopold Sédar Senghor foot bridge and Pont de la Concorde, across from the Musée d’Orsay, bobs the Concorde. The barge started its life in the Netherlands as a cargo vessel in the late 19th century, and was remodelled into a houseboat by the current owners, who bought it in 1998. One of the few houseboats available for short-term rental through France Homestyle, it is now a luxury apartment open for visitors who would like to be right in the centre of Paris, but in a more unusual setting. With three bedrooms, two bathrooms, a 500-square-foot sundeck with views across to the Grand Palais and the National Assembly, sitting and dining room and fully equipped kitchen, it’s more than a home from home – after all, whose home has a view of the Eiffel Tower? 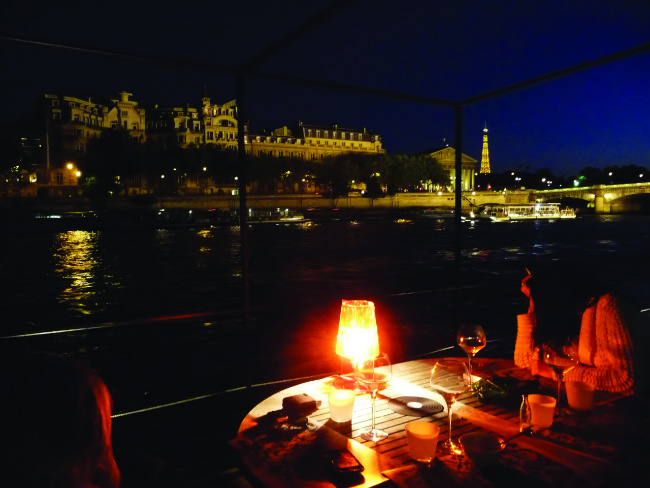 Paris by night from the decks of the Concorde, an unusual rental home. Photo: France Homestyle