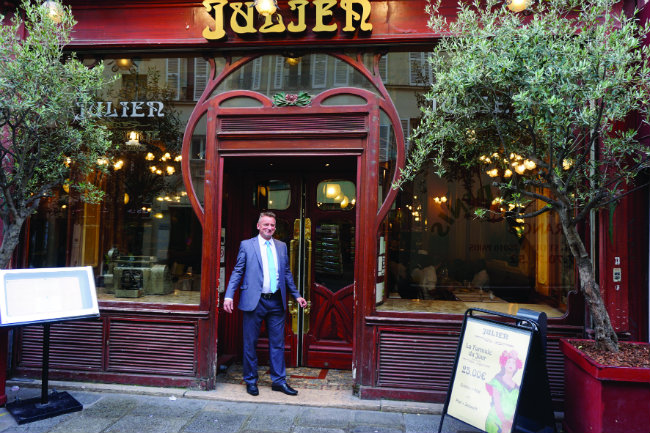 This is contemporary Paris in a nutshell: ethnically diverse, increasingly gentrified and dedicated to the business of food, a vibrant microcosm condensed into the southern section of this very long street. Migrants and refugees from all over the world have been coming here since the opening of the Gare de l’Est and the Gare du Nord – from Alsace to begin with, after its loss to the Germans in 1871. Jews followed, and Arabs, then Turks, Indians, Pakistanis, Kurds, Afghanis, Africans, Chinese… Now also Syrians, who like to dip into familiar mezzés served at Le Daily Syrien on the nearby Rue des Petites-Écuries. The bobos and hipsters like the colourful human mix – and the affordability of property. At least for now they have avoided sanitising the neighbourhood, keeping their lifestyle contained within their businesses, or hidden out of sight in the bamboo-filled back alleys, behind the heavy portes cochères. 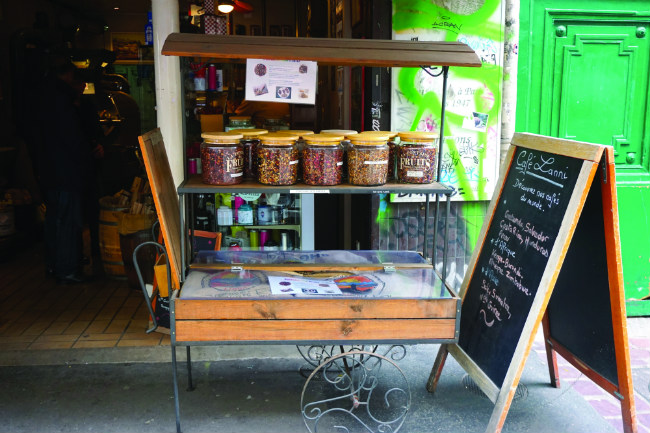 At the bottom of the street, Louis XIV’s triumphal arch, La Porte Saint-Denis, marks the city’s old boundary (hence ‘Faubourg’ from this point north, meaning ‘outside the borough’, as opposed to Rue Saint-Denis on the southern side of the monument, which was within the city walls in olden times). Together the two streets were the city’s major north-south axis, La Voie Royale through which the kings of France entered Paris after their coronation in Rheims, and through which they were carried to be buried in the Basilica of Saint-Denis, north of Paris. Paradoxically, it was the British Queen Victoria who was the last monarch who passed through here, in 1855, when she arrived in Paris by rail to visit the World Fair. The medieval city walls and fortified gate, erected in the 14th century under Charles V, were replaced by the Boulevards and the present arch under a Sun King confident in his victories – witness the inscription Ludovico Magno and the depiction of his victories carved onto the stone of the monument. 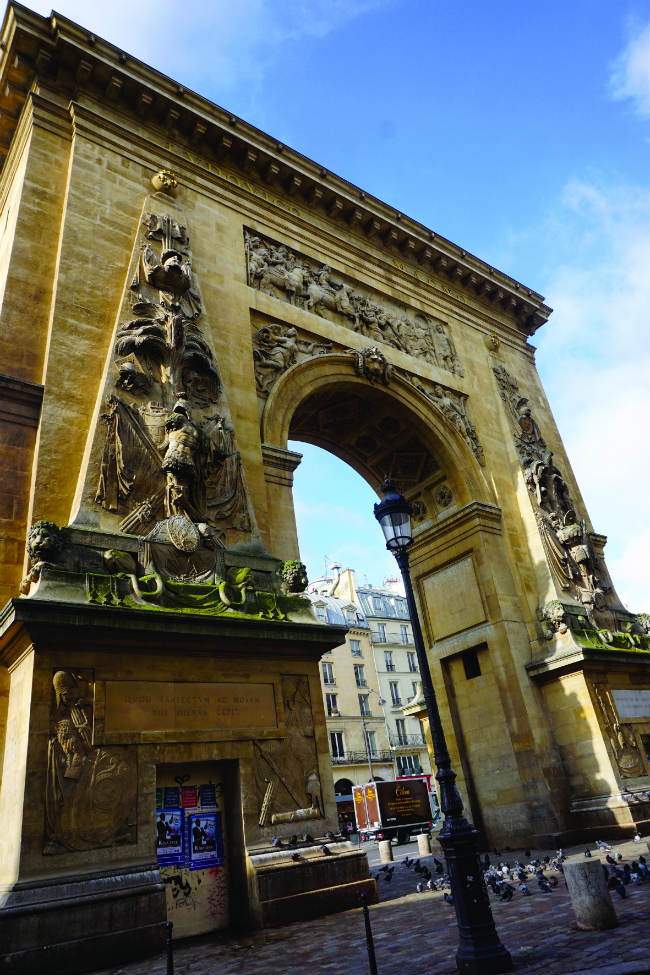 Close by is Julien, a relic of Belle-Époque Paris, named after Julien Barbarin, its proprietor in 1920, when the stunning Art Deco glass ceiling was installed. The Art Nouveau interior pre-dates it, going back to the opening of the restaurant, in 1905, then a simple bouillon serving vegetable or meat broth to the theatre world of the Boulevards. Although referred to as a brasserie, you will not find shellfish or choucroute here. For that you need to dine at Flo, its sister restaurant, on the nearby Cour des Petites-Écuries, a depot of beer from Alsace when it opened in 1871, soon after the Franco-Prussian war. In 1918, Monsieur Floederer (also from Alsace), turned the place into a brasserie. At a time when anti-German feelings were rife, he was wise enough to shorten his name to Flo, a name that conquered the world from 1968 on under the ownership of yet another Alsatian, Jean-Paul Bucher. After taking over all the historic brasseries of Paris, he expanded the name to the provinces of France and further afield to London, Beijing and Tokyo. Hundreds of restaurants came under the umbrella of Flo, creating thousands of jobs.

Time seems also to have stopped at the next-door Turkish Derya, throwing you back to old Constantinople of decades ago. This excellent, unpretentious, inexpensive restaurant caters predominantly to fellow Turks, the most reliable of recommendations. Paris altogether disappears at the Passage Brady, where “Little India” reigns supreme under a period glass roof almost 200 years old. Never mind that the retailers here are Pakistani, Bangladeshi or Sri Lankan more often than they are Indian. It started with one restaurant in 1973. Others popped up in no time, barbers too, and more recently the unmissable Velan in its riot of colours and groceries, spices, chutneys, incense, and all manner of trinkets, crafts, costumes, cosmetics, Bollywood DVDs… You name it. 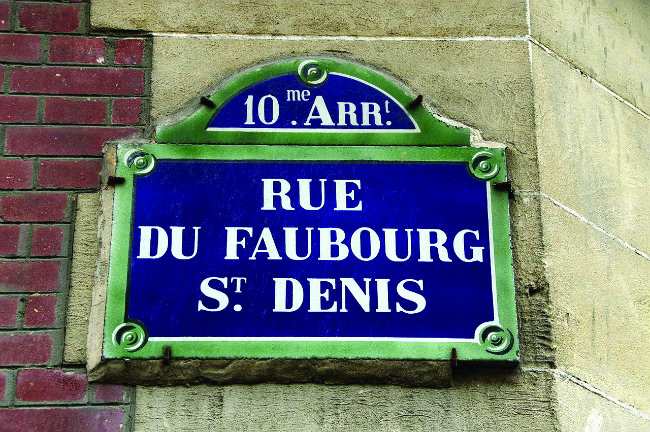 Things get gentrified at Charles Compagnon’s latest ‘neo’bistro Le52, at that street number, an airy, casual place with a rough-and-chic décor designed by his German wife Gesa Hansen. There’s also Ola, a Swedish partner. The place is open 7/7 from 8am to midnight, with plugs installed everywhere for laptop users. It gets packed at lunch time and dinner, when a daily average of 200 clients enjoy Adrien Bouchaud’s inventive cuisine. By keeping the menu short he can satisfy the regulars with two new dishes each week. This demands creative talent and Adrien has plenty of it. It runs in the family – as a child he was taught to cook by his grandmother, and working for the likes of the Ritz and Le Doyen did the rest. They take no bookings (they don’t even have a telephone), but nobody seems to mind waiting for their turn.

The next-door deli, Julhès, is a food lover’s mecca. It started in 1996, with father, mother, then 23-year-old brother Sébastien and 21-year-old Nicolas, the dynamo of the business, who is up and about at Rungis wholesale market by dawn or before. He is also a consultant for Diageo, the UK leader in alcoholic beverages, for whom he provides presentations in English. “I love the street, because it has the energy of a maritime port”, he says. His paternal grandparents were already in the food business back in the Auvergne, selling tinned tripoux, a local speciality made of sheep tripe. Indeed, the array of charcuterie and cheeses points to the Auvergne, a region of hard-working people and hearty eaters – no wonder Julhès has spilled over in no time to two neighbouring outlets. Squeezed between them are the Brûlerie Lanni, roasting coffee beans from all over the world since 1947, and the Kurdish Urfa Durum, from a more recent page in history. 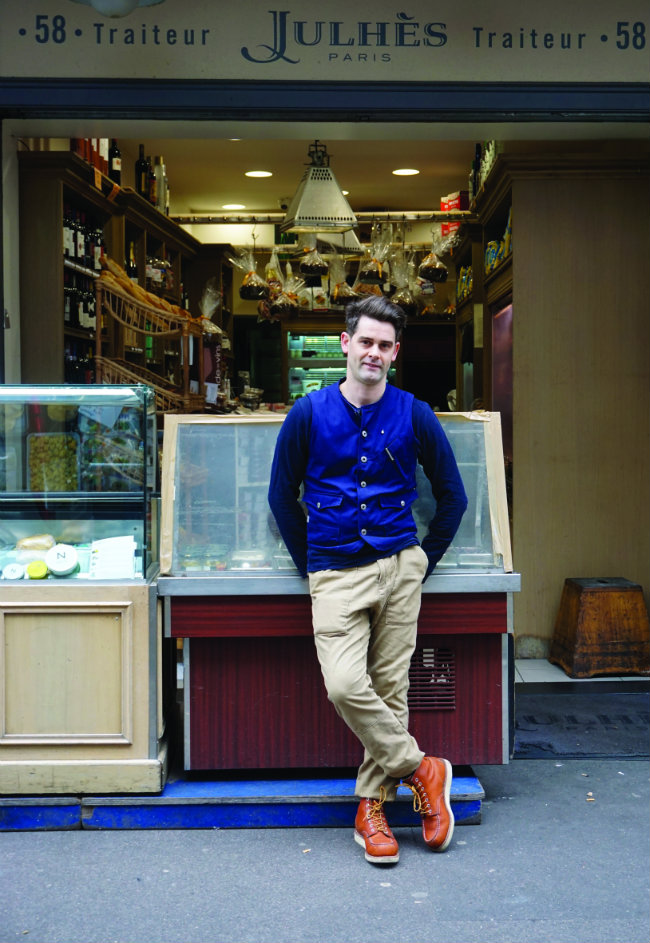 Across the street, Laure and Mathieu opened Taka & Vermo only last October, the only fully-fledged fromagerie on a street that once had five, but none when they arrived. After two years’ searching, a Turkish concierge tipped them off about this Turkish travel agency that was up for sale. The intriguing name is short for Takahashi and Vermorel, their respective family names. The Japanese bit comes from Laure’s father and can also be detected in their Saint-Nectaire cheese, which they top with candied yuzu. They were already life partners when their passion for cheese turned them into business partners. A four-month exploration of France and Italy followed, during which they covered 10,000km in search of unique cheese makers. Seventy per cent of their cheeses come from hand-picked artisanal producers in France and neighbouring countries.

It’s like a village here. The Algerian neighbour drops by to pick up unpasteurised cheese to accompany her couscous; the Antillaise hairstylist comes here to get her picodon goat’s cheese from the Ardèche for the apéritif in her hair salon. Laure and Mathieu get their freshly made bread and croissants from Sibylle Sellam and Grégory Foucher, life partners too and co-chefs at Gros on the peaceful Cour des Petites-Écuries, off the busy street. Their neighbours in the peaceful alley, the Corsican deli Terra Corsa (No. 1) and the tapas bar Farago (No. 11) are also worth exploring. The spot was much noisier in the 18th century, when the King’s coaches and harnesses were made and maintained here. The workshops were set at street level, with the craftsmen’s living quarters on the floor above. 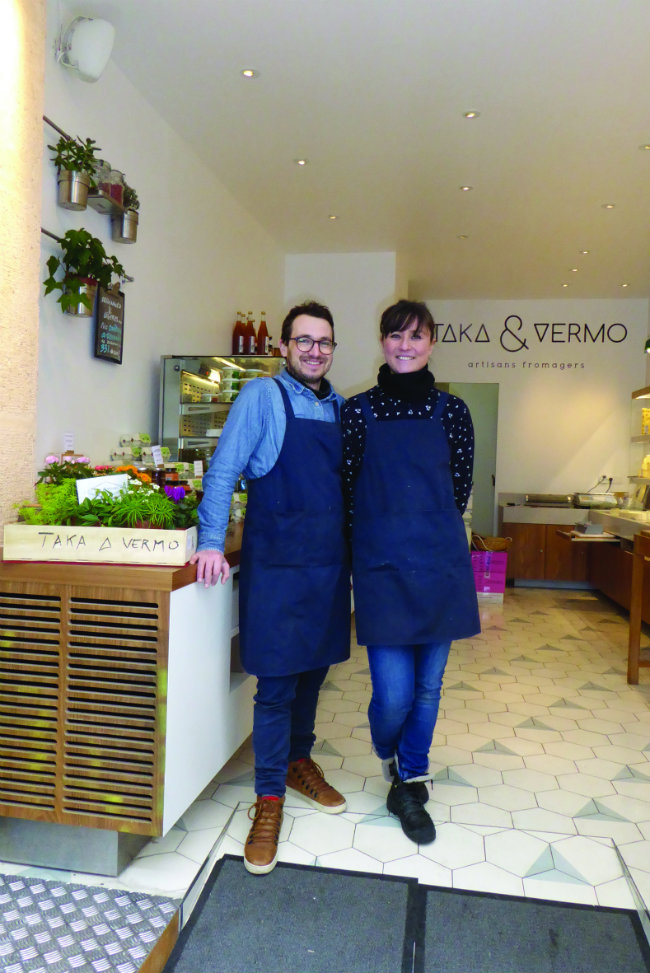 Gros has a lovely terrace where you may linger to your heart’s content (as you may in all gentrified eateries). If you prefer to linger inside, you will be able to see Sibylle and Grégory in action in the open kitchen, completely in their element when they cook. They look so young and happy. “We live for food,” says Sibylle. “Even on Sundays, when we have a break, we spend the evenings working out new concoctions.” They too went off on a culinary journey, backpacking through Asia for six months, a great lifetime experience that has inspired their cooking ever since.

The Italian Beatrice Dettori is adamant: the old sign on her shop Capri Bazar, a little further up the street, was predestined. There was nothing Italian about that crammed little shop that was selling anything and everything, but it was the perfect name for the fabulous Italian deli she and Pino Amato were looking to open. And there was already a kitchen in there too! 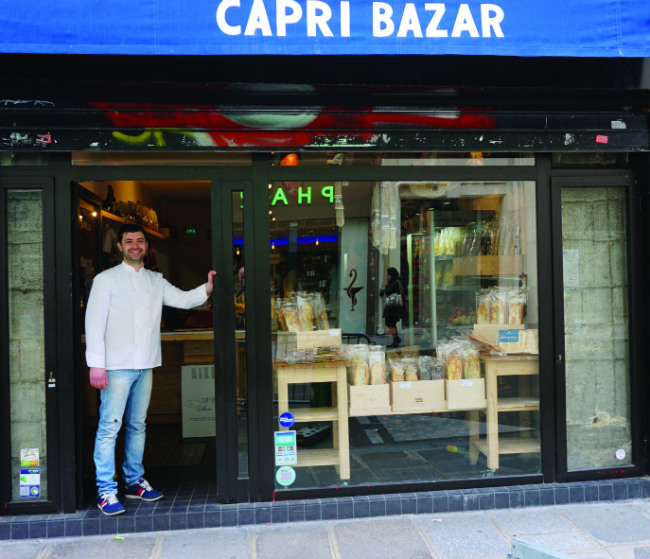 Beatrice’s father, now retired from the textile world, has volunteered to criss-cross Italy on their behalf, on the lookout for producers in remote villages. There are those who do just one foodstuff, like the two women he found in one of the villages of Lombardy who only do ravioli, or the producer in the Abruzzo who makes nothing but sausages from spiced liver… Such dedication to quality and excellence is not ignored by the Italians and Italophiles who are willing to cross Paris to shop here. 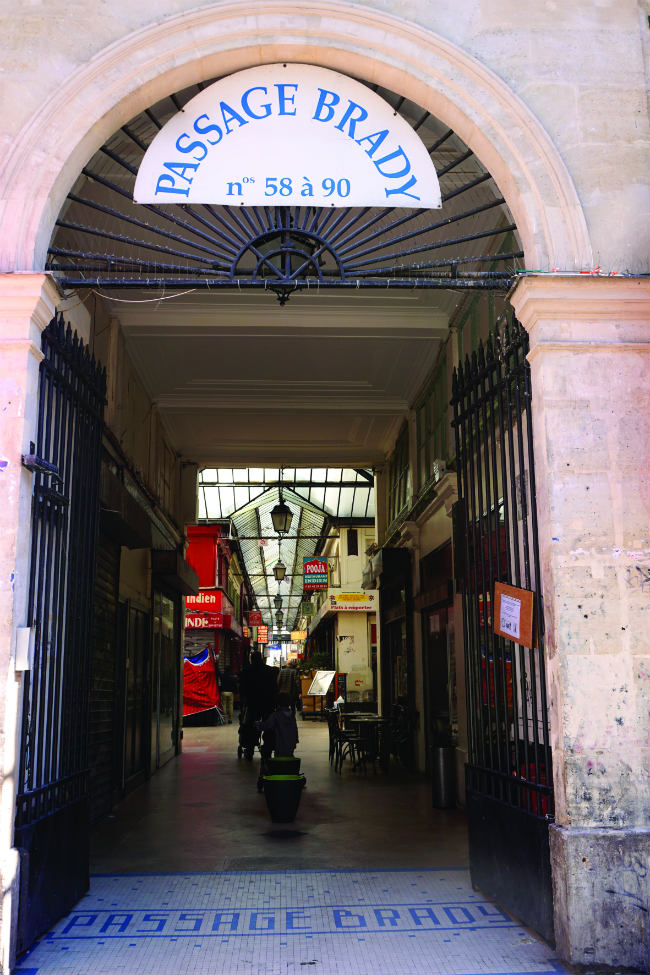 François Morris is in charge of supplying everything, from food and wines to napkins and toothpicks. He watches over his 30-strong troupe, training newcomers so well that they have no desire to leave. He loves the contact with his clientele, although he is aware of inevitable changes over the years, and that the Boulevards’ theatre world doesn’t hang around here as it used to.

This is Charles Compagnon’s third bistronomie, after the booming success of Le Richer and L’Office on Rue Richer. Time at the Hôtel Costes and the Ambroisie followed his education at the Médéric École Hôtelière de Paris. He enjoyed his year at New York’s James Beard Foundation, he’s big on Sancerre wines, and is a great friend of Vacheron, who he chose to be his son’s godfather. 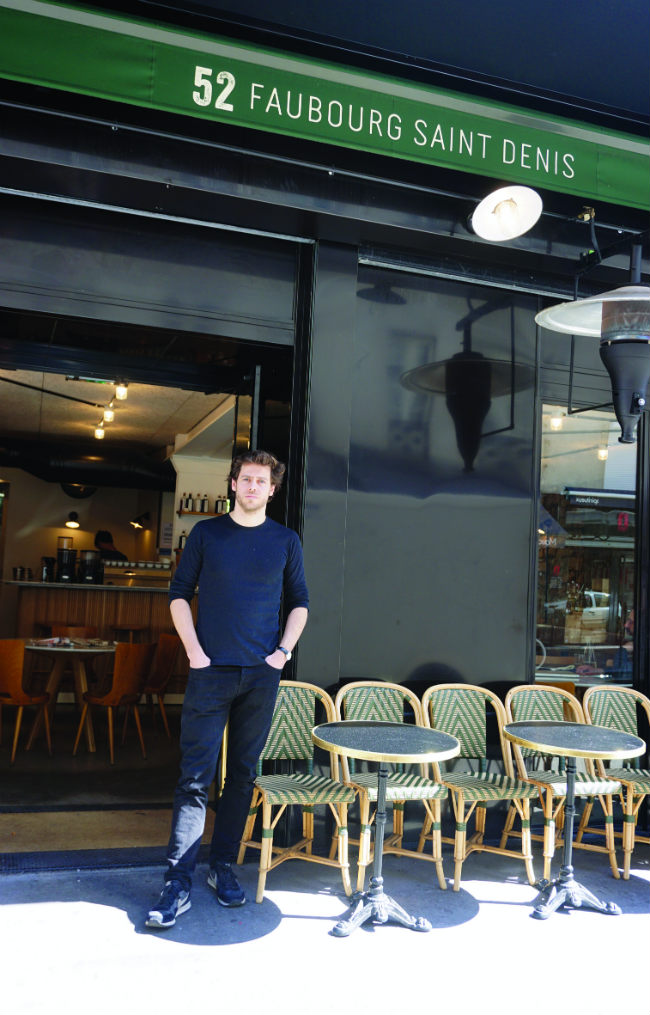 Nicolas owns a copper still, which he operates in the back alley. A lot goes on behind the scenes, where he creates and experiments on chocolate, ice-cream, even scents, while patisserie and bread are made by Sébastien. Honey is produced in the beehives on the roof, distilled downstairs, and mixed with maple syrup, brandy and malt into an exhilarating drink.

Laure Takahashi learned the trade from Laurent Dubois, one of the leading fromagers in Paris. Mathieu Vermorel brought his expertise in wine. He will tell you that cheese can go even better with white wine. You are sure to be convinced if you try it with homemade brie aux noix, amandes et miel. You can actually buy honey here, and eggs, butter and yoghurt too. 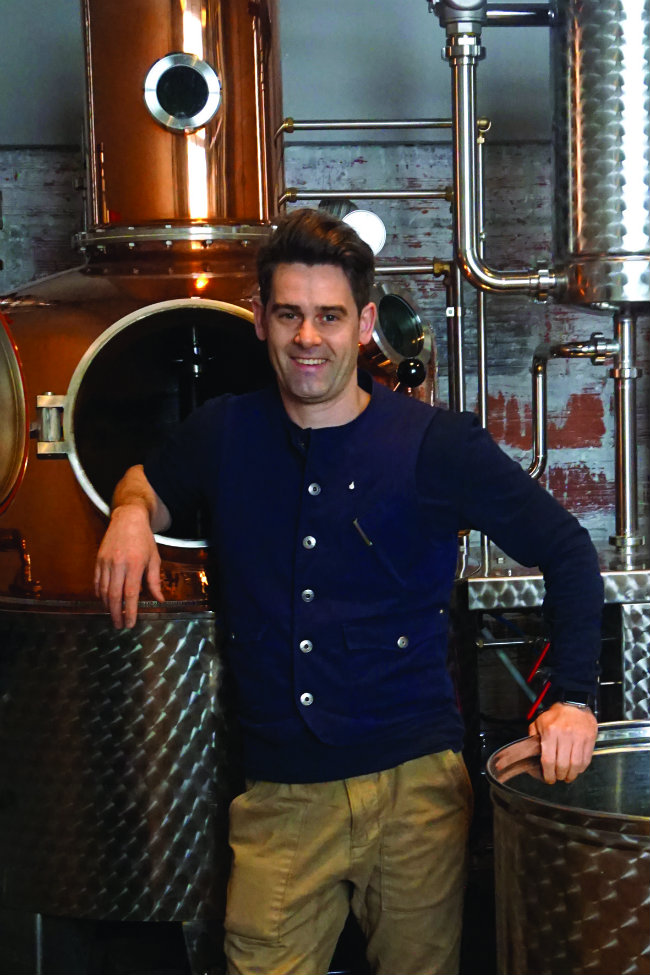 Nicolas at Julhès with his copper still

At the age of 26 each, Sibylle Sellam and Grégory Foucher already turn out dishes as divine as those of their elders. They met at the prestigious Ferrandi school of Gastronomy, (Adrien Bouchaud from Le 52 also trained there). They have a knack for combining Asian cooking techniques, such as steaming, with French ingredients. “We try to transfer nature to the plate,” Sibylle explains.

“People think of Italian food as pizza and pasta,” says Pino Amato. “As a matter of fact, pasta and parmesan are the only foodstuffs shared by all Italians.” Pino is from Naples, Beatrice Dettori from northern Italy. People are often unaware that every region in Italy has its wealth of culinary traditions, something Pino sees as his mission to reveal to his customers. 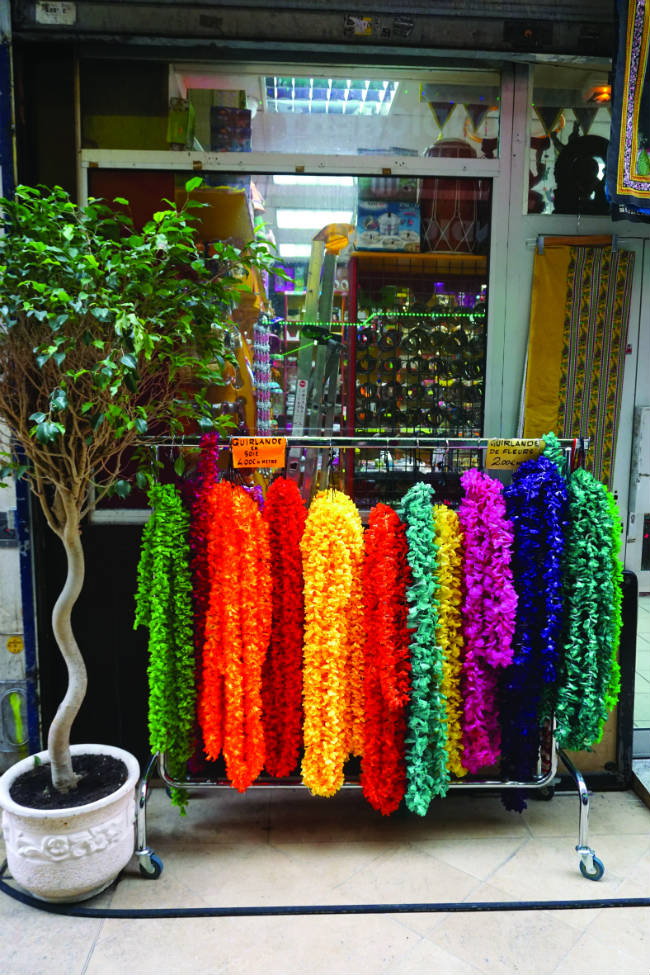