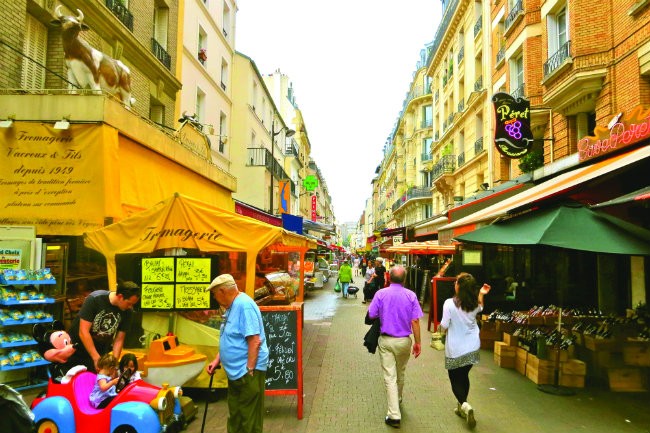 Visitors to Paris will generally allot precious little time to exploring the city’s southernmost arrondissement, the 14th. They usually only make a brief visit, to the Fondation Cartier art museum (261 boulevard Raspail), the famous Catacombs (1 avenue du Colonel Henri Rol-Tanguy) or to pay homage to the likes of Baudelaire, De Beauvoir, Beckett and Brassaï at the Montparnasse Cemetery (3 boulevard Edgar Quinet). However, they then usually head straight back to their favourite quartiers further north.

That’s a shame, as the Rue Daguerre, one of Paris’s most lively and characterful market streets, is just a five-minute walk from any of the aforementioned destinations.

Most who know the Rue Daguerre think of it as a pleasant little avenue where one can find a decent bottle of wine, a poulet rôti or a slice of good brie. That’s certainly accurate, but for those who have lived and worked there, it’s always been something more.

“I settled here on Rue Daguerre around 1951,” recounted the legendary experimental filmmaker Agnès Varda, during a 2012 interview by Paris City Hall. “I loved this neighbourhood… there was absolutely everything you needed to live – a bakery, a butcher, a coiffeur, a hardware store, a tailor, a grocer’s shop, a clock repairman –and I enjoyed that very much, having everything I need, just down my street.”

This microcosm filled with lives and stories was the subject of one of Varda’s most touching, humanistic films, Daguerréotypes (1974-1975), a documentary about those who lived and worked just outside her door.

“All the shopkeepers that I filmed on Rue Daguerre had immigrated from French regions and arrived at the Gare Montparnasse,” Varda recalled. “They settled just within reach of the train station – they remained attached to their homeland and I found that very moving.”

Varda was far from the first young artist to be drawn to this predominantly working class, immigrant neighbourhood. After World War 1, the café society which flourished around such brasseries as La Coupole (102 Boulevard du Montparnasse) made Paris one of the era’s most vibrant centres of artistic and intellectual life. During those years, the neighbourhood was littered with the ateliers of artists like Picasso, Modigliani and Man Ray.

In the decades since Varda founded her avant-garde film production company, Ciné Tamaris (88 rue Daguerre), more affluent populations have moved in. But what still makes the Rue Daguerre so distinctive among Paris’s great shopping streets is how much it remains a richly concentrated, diverse neighbourhood unto itself – working class and bourgeois – one with artists, musicians, photographers and shopkeepers of all persuasions. Perhaps more than ever, it’s a street that offers “everything you need to live”.

A crossroads between the arts and gastronomy, as the eponymous owner of Galerie Corinne Bonnet (63 rue Daguerre) likes to say, it’s “a place where you find celestial foods and terrestrial foods”. Therefore, it was appropriate when professional accordionist Danielle ‘La Fleur du Jura’ Pauly and her oenologist husband, Jean-Philippe Laruelle, chose the Rue Daguerre to combine their love for music and wine. They opened Accordéon Paris Gourmands (80 rue Daguerre) in 2013, thus saving an accordion shop founded in 1944 that was set to close.

“We wanted to make this shop live again,” says Laruelle. “The accordion is all about conviviality, and wine certainly is too, so put them together and you can only have a happy marriage.”

They faced considerable competition but Laruelle wasn’t worried: “Rue Daguerre is around 600 metres long, and we have seven wine shops. That’s a very high concentration, but we all have our specialities.”

A native of Franche-Comté, Laruelle stocks a wide range of rare wines from the Jura. Meanwhile, his British neighbour, Daley Brennan, at À l’Ombre d’un Bouchon (82 rue Daguerre), is passionate about affordable vintage Bordeaux; Gérard Katz at La Cave des Papilles (No 35) is a pioneering advocate of ‘vin naturel’, and Sabine Péret’s Caves Péret (No 6) boasts an awardwinning selection of Corsican wines.

For Laruelle, offering a tour de France of the country’s wine regions and styles is just another way that the Rue Daguerre marks itself as exceptional.

“In Paris, it’s one of only a few historic shopping streets that really count, for having preserved their traditional spirit and small shopkeepers,” he says. “Here, in a few hundred metres, you can do all your shopping. There are several excellent butchers, great cheese shops, a fishmonger who’s considered one of Paris’s best – exceptional merchants of every kind.”

History and demographics have played a part in the high standards that the street’s vendors set for themselves. For Sylvain Carré, the seafood buyer at Daguerre Marée (9 rue Daguerre), it’s a natural location for an exceptional poissonerie, simply because so many residents originally came from the coast.

“This was the Breton neighbourhood of Paris, because they all came here through the Gare Montparnasse,” he explains. “Historically, it was the best neighbourhood for a seafood business, because you had a clientele of natural connoisseurs.”

Across the street at Boucherie Axel Huet (No 4), 21-year-old Axel Huet, a fourth-generation butcher who took over the family shop this March, tempts customers inside with complementary slices of truffled mortadella and aged Iberico ham, while offering well-priced, quality cuts of beef.

“The neighbourhood is a real mix,” says Huet. “There are people who don’t have a lot of money, who will only come if the meats are reasonably priced, but there are also those looking for luxury products, who want a Bresse Chicken – so I need to offer top quality at good prices.”

It’s a strategy adopted by many of the street’s businesses. “On the whole, this is a street where everyone has quite high standards – restaurants and shops,” says Mehdi Cambier, chef at Daguerre Marée’s restaurant and oyster bar. “There’s such a huge offering here, we all have to raise the bar otherwise we won’t stand out.”

Recent restaurant openings, such as the chic Augustin (79 rue Dageurre), offering refined yet affordable ‘cuisine bistronomique’, confirm the trend. To Corinne Bonnet, the fact that visitors must run a gauntlet of gourmet delights before reaching her gallery is good for sales.

“Rue Daguerre is such a feast for the eyes,” she says. “After being surrounded by cheeses and flowers and wine, by the time people arrive here, they’re already happy!”

Situated in a verdant, luminous passageway, where artists from the neighbouring Art Médium drawing school (63 rue Daguerre) are often found quietly sketching, Bonnet’s gallery is completely unlike the snobbish venues one finds in the Marais and other chichi quartiers.

“I created this gallery in this place because I want art to be part of people’s daily lives,” she says. “This isn’t a neighbourhood where art is completely sacred, and that’s fine by me. It’s a place where you nourish your mind and body as part of everyday life.”

A high concentration of creative professions contribute to the street’s artistic atmosphere – it’s home to such legendary photography studios as Studio Daguerre and Granon; the offices of Intramuros, the leading international design magazine in France, and Atelier Claude Wrobel, a world famous restorer of paintings.

Agnès Varda, who’s still very active at 87, transformed the street into a sandy beach for her César-winning self-portrait, Les Plages d’Agnès (2008). Most recently, in her Rue Daguerre courtyard, she shot a film featuring herself and JR, a celebrated street artist, for a crowd-funded art movie project they launched this summer.

However, the Rue Daguerre wouldn’t have the same vitality if it hadn’t known such a euphoric artistic period during the early 20th century.

“I’m not interested in nostalgia,” says Bonnet, “but I value this link with an extremely creative, avant-garde era, which pushed so many boundaries.”

Alexander Calder, whose kinetic sculptures would be christened “mobiles” by his friend Duchamp, opened his atelier at 22 rue Daguerre during 1926. In 1937-1939, De Beauvoir and Sartre rented rooms around the corner at Hôtel Mistral (24 rue Cels), where she wrote her first novel, L’Invitée. American painter Shirley Jaffe developed her abstract expressionist style at 77 rue Daguerre, where English painter and printmaker Stanley Hayter also lived. He founded the Atelier 17 studio, which was frequented by Ernst, Kandinsky, Giacometti, Picasso and Chagall.

Despite that rich history, today it’s all about the vie de quartier (neighbourhood life), something which has disappeared from many parts of Paris. “It’s a big family,” says Mehdi Cambier. “At 5.30am, all the shop keepers are here – everyone is in the street saying ‘bonjour’. Friendly swaps take place all the time between shops.”

There are deep friendships between businesses, often going back generations. “There aren’t many places left in Paris where you still have businesses passed father to son, mother to daughter,” says Pauline Vacroux, of the phenomenal Fromagerie Vacroux (5 rue Daguerre).

Pauline’s maiden name is Péret. She used to work with her mother, Sabine, who runs Caves Péret, which is across from the Fromagerie. One day, Sylvain, the son of Jean-Jacques Vacroux, found the courage to come and say bonjour, and they were soon married.

With two life-sized cows perched over their awning, Sylvain Vacroux and his wife, Pauline, represent the third generation to supply the Rue Daguerre with France’s best, raw-milk cheeses. Today, their selection exceeds 300 cheeses (and more during chèvre season), matched with Corsican charcuterie and small-batch jams.

Each day, this exceptional fishmonger boasts a kaleidoscopic display of the ocean’s riches, often landed within the previous 24 hours. Sourced direct, from small-boat fisherman, Daguerre’s seafood is ultra fresh, seasonal and sustainable. The maison-smoked salmon and their delectable terrines rank among the best in Paris.

Gérard Katz opened this shop dedicated to ‘vin naturel’ in 2000, and today he carries 1,500 of France’s finest organic, biodynamic and additive-free wines. Winemakers often entrust Katz with their rarest cuvées, and no wonder, as these vibrant, complex wines could scarcely have a more knowledgeable, spirited advocate.

Nestled in a  ower-lined passageway, Corinne Bonnet’s intimate gallery is a haven from Paris’s often snobbish and avaricious contemporary art scene. Exhibiting superlative painters whose worth has been proven by years of commitment to their oeuvre, rather than by  ckle market trends, this is a gallery by and for true art lovers.

Paris was once home to dozens of accordion shops but only a handful remain. By far the most colourful and unique is on Rue Daguerre. World-class accordéoniste Danielle Pauly and her oenologist husband, Jean-Philippe Laruelle, offer hand-crafted accordions, experty-chosen wines and gourmet food.

Only in France could you  nd a bookstore like this… After the US and Japan, France is the world’s largest market for bandes dessinées (comic books). With its stock of 11,000 comic books, graphic novels and Japanese manga works, this colourful shop shows why the French celebrate comics as a superior artform.