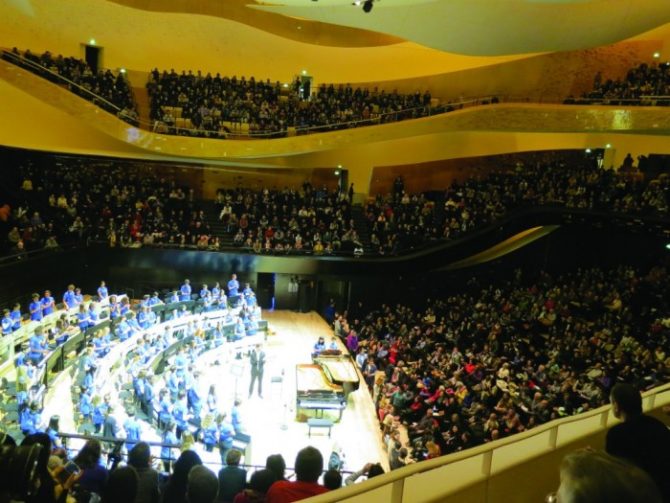 With the grand, albeit premature opening of this new concert hall and exhibition space, designed by French architect Jean Nouvel, on January 14, the former Cité de la Musique in the Parc de la Villette was reborn as the bigger, shinier Philharmonie de Paris. Its location, in the 19th arrondissement on the city’s north-eastern edge, makes it a strategically placed cultural fulcrum that’s unmissable for inveterate concertgoers and approachable for the less-privileged residents of Paris’s ‘périphérique’.

The grand inauguration was somewhat marred by the notable absence of the architect. According to an interview in Le Monde, Nouvel objected to the opening date being brought forward several weeks, before the venue had undergone proper acoustical testing and adjustment. Peu importe, this grand venture was opened without the tests having been carried out.

Although I’m sympathetic to the architect’s pain, knowing that the building still needed some finishing touches didn’t detract from my enjoyment, nor did it seem to matter to the enthusiastic crowd, who appeared to forgive any missing details. One such enthusiast was piano virtuoso Lang Lang, who declared the hall to be one of the best in the world, boasting “immense proportions but without giving the impression that you are in an impersonal arena”.

For the opening weekend, the Chinese prodigy offered one of his signature 101 Pianists masterclasses, during which 100 students from the Île de France’s conservatories played in unison with and received inspiring tips from their celebrity mentor. The atmosphere was celebratory and jubilant– a passing of the torch to the next generation. Seeing children and teenagers who were so accomplished and in love with music sharing special moments with an international superstar, witnessed by their parents in the audience, was quite moving.

The Philharmonie is tackling the challenge of modernising the form of the public concert – a conservative ritual that hasn’t changed much since the 18th century. For example, daytime events, are tailored towards families with children, with concerts limited to a one-hour duration. Each weekend the Philharmonie puts together immersive experiences for all ages, with singing and instrumental workshops, and concerts at affordable prices.

The Music Museum, housed in the pre-existing Philharmonie 2, is a fascinating place of discovery, boasting a permanent collection of instruments and objets d’art plus temporary exhibitions, such as the inaugural show, David Bowie is, which is due to run until May 31.

There’s no lack of options to replenish your energy levels, either, with the Le Balcon restaurant on the sixth floor of the Philharmonie 1 and an informal, ground floor snack counter plus six bars, including one that specialises in Champagne.

Here’s wishing this premature baby a bright and vibrant future.

Previous Article In Search of Monsieur Proust in Paris
Next Article La Toilette, the Invention of Privacy at Musée Marmottan Monet